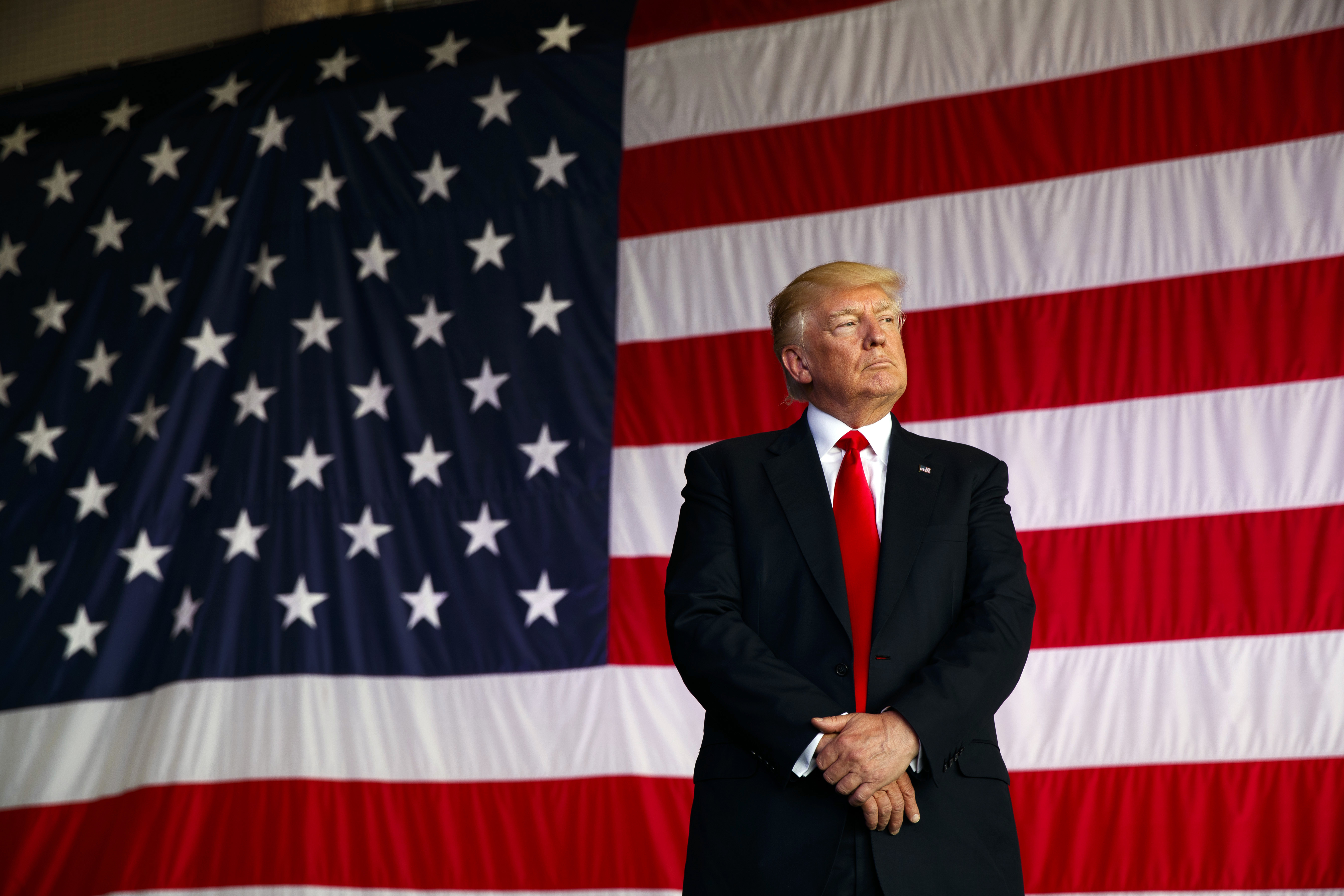 President Donald Trump stands in front of an American flag while waiting to take the stage in May 2017.

This story has been updated to reflect the Trump administration's announcement on Tuesday concerning DACA.

Paul Quiñonez, a legislative aide in the Washington State House of Representatives, was once unsure pursuing the college dream would be worth the trouble. When he was just 7 years old, Quiñonez moved to the United States from Mexico. But Quiñonez is undocumented. So when he was younger, he and his parents wrestled with the question of investing in college: Was spending the money worth it if Quiñonez was only eligible for under-the-table gigs, like dishwashing and housecleaning?

Then, when Quiñonez was still in high school, the program known as DACA, or Deferred Action for Childhood Arrivals was announced. The program offers two-year work permits to those who have been in the country illegally since they were children. Suddenly, for Quiñonez, the question of attending college was a no-brainer.

“It made it a logical investment to make because we knew I would be able to work,” Quiñonez, 22, said. My parents “took a risk just by coming to this country and so I always grew up with them telling me to make the most out of it and to make sure that their risk and their sacrifices were worth it.”

DACA allowed Quiñonez to apply for private scholarships he wouldn’t have otherwise qualified for — enough to pay for his first year at Gonzaga University. It also allowed him to work part-time while in school. And it made him feel more comfortable in his own skin.

“I did grow up kind of ashamed of the fact that I was undocumented, and I think that was something that came with DACA: It enabled a lot of people like me to feel comfortable enough in our identity as immigrants to come forward and start speaking for ourselves.”

But now Quiñonez’s future — as well as the future of some 800,000 DACA recipients across the country — is about to abruptly and dramatically change. On Tuesday, Sept. 5, President Trump ordered an end to DACA. Trump, however, urged Congress to replace it with legislation before it fully expires on March 5, 2018. According to The New York Times, officials said some current DACA recipients will be able to renew their two-year work permits until October 5.

Attorney General Jeff Sessions announced Trump's decision on Tuesday because attorney generals from Texas and nine other states had threatened to file a lawsuit against the program if Trump did not act by today.

Quiñonez livestreamed Sessions's announcement on his computer screen at work. As Sessions "kept talking, I kept getting more outraged about the lies he was spewing," Quiñonez said. Contrary to what Sessions implied, Quiñonez said the U.S. would actually lose money by ending the program: For one, undocumented immigrants own businesses and employ others. Quiñonez also criticized Trump for letting "Sessions do his dirty work."

Because of Trump's DACA decision, approximately 17,000 Washington residents could now lose their work permits and be subject to deportation.

The reaction among local politicians has been swift in their support of DACA. Washington Gov. Jay Inslee is one of more than 1,800 political, religious and law-enforcement leaders from around the country who have signed a statement in defense of the program. In her own statement, U.S. Rep. Pramila Jayapal said: "After toying with their futures and raising their hopes with talk of his ‘big heart,’ Donald Trump has shown exactly what his priorities are. He has once again sided with hate and xenophobia, putting in place a repeal that is cruel, inhumane and unjust."

Seattle Mayor Ed Murray called President Trump’s elimination of DACA "a reprehensible and heartless act by a president who has repeatedly attacked immigrants." In a statement released last week, Murray spoke about the contributions DACA recipients give to the community. “DACA recipients contribute 15.3 percent of their wages to taxes, which fund Social Security and Medicare. DACA recipients own homes and start new businesses," Murray said.

"Unfortunately, this is a sad reminder that President Trump and his administration pose a very real threat to our community and our values,” Durkan said in a press release. "Diversity and inclusiveness are the core values of our city and country. We need to be united and come together to protect the principals that make us who we are."

Her opponent, Cary Moon, went on Facebook over the weekend to say that Trump was trying to create "panic and fear."

"As Mayor, I will continue to affirm that Seattle WILL remain a sanctuary city that will enact bold policy to protect the most vulnerable communities against discriminatory federal policy," Durkan said. "It’s our collective responsibility to stand in solidarity with the 17,000 young DREAMers [DACA recipients] here in Washington state, as well as the 800,000 nationwide."

Even local corporations have come to the program’s defense. Amazon.com chief executive Jeff Bezos, Microsoft CEO Satya Nadella and Starbucks boss Kevin Johnson are among those who signed an open letter noting that those who benefit from DACA "are vital to the future of our companies and our economy.”

The ACLU of Washington called ending the program "an act of cruelty" and said the decision would inject "chaos and uncertainty into thousands of workplaces and communities across America. There is no humane way to end DACA before having a permanent legislative fix in place."

Former President Barack Obama created the DACA program in 2012. To qualify for the program, recipients must undergo a thorough background check; be under the age of 31; lived continuously in the United States since 2007.

In a Facebook post, Obama issued his own statement about Trump's decision to end the program. He said targeting "these young people is wrong – because they have done nothing wrong. It is self-defeating – because they want to start new businesses, staff our labs, serve in our military, and otherwise contribute to the country we love. And it is cruel."

The Federation for American Immigration Reform, a group based in Washington D.C., was one of the few organizations to applaud Trump's decision. It called DACA an "unconstitutional abuse of executive authority by President Obama."

Local DACA recipient Guillermo Mogollan-Diego, 21, a senior at the University of Washington, says the current debate over DACA has put a spotlight on the larger immigration issue.

Mogollan-Diego calls DACA "the little band-aid there is on the whole immigration problem." But Mogollan-Diego believes it's important to not only think about the so-called Dreamers, the term so often used to refer to DACA recipients, but the other estimated 11 million undocumented immigrants as well.

Neither Quiñonez nor Mogollan-Diego are entirely sure what they will do now that DACA is ending. For Quiñonez, who has two siblings who were born here and are therefore U.S. citizens, the situation is particularly complicated.

Quiñonez says since Trump was elected, he and his family have considered moving back to Mexico. But he notes that whatever his family decides to do, it's time that the public at large acknowledge the U.S. immigration system is not only highly flawed but unfair to the very same countries that the U.S. itself is responsible for destabilizing economically, politically and socially.