Is it too little, too late for Bruce Harrell to be mayor? 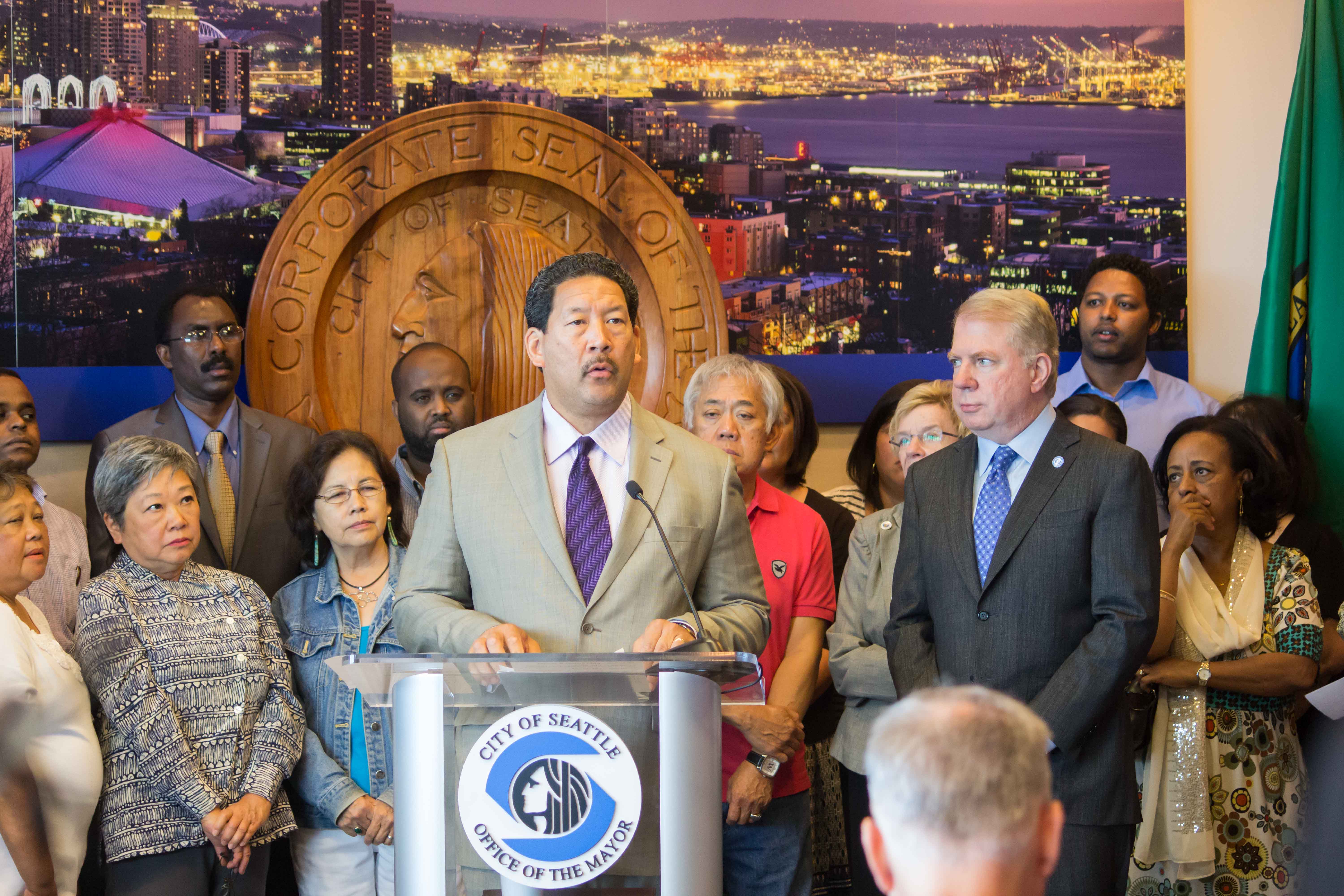 City Council President Bruce Harrell has always had the authoritative bearing, the smarts and the lifetime knowledge of Seattle to seem like a potential mayor. But his chance appeared to have gotten away when he finished fourth in the 2013 primary.

He would have five days to decide whether to stay, and gave no indication of his plans in a statement that only promised an announcement in that period. A Seattle City Council spokesperson said Harrell would have to give up his council seat if he chooses to accept the mayor's position. There is speculation in City Hall that Harrell might choose to keep his council post, making fellow Councilmembers Tim Burgess, who will step down at the end of the year, and Lorena González, who is almost assured of a new term in the November election, the most likely interim appointments.

Former King County Executive Ron Sims questioned whether Harrell would have enough time as mayor to accomplish enough to justify giving up his remaining two-plus years as a council member. Because of Murray’s resignation, the winner of the November election contest between finalists Cary Moon and Jenny Durkan will take office as soon as voting results are certified Nov. 28.

Until Murray’s sudden decision in the wake of new allegations of sexual abuse against him, Harrell had been among those calling for Murray to stay in office until his term was scheduled to finish at the end of this year, even saying, "The people of Seattle, in my opinion... did not ask us to judge anyone for something that happened 33 years ago or maybe didn't happen... I wouldn't want to be judged for something 33 years ago."

For Harrell, it’s the kind of comeback that seems better suited to the sports pages, where he was often a focus of attention as a youth and then as a standout linebacker — and captain — for the University of Washington’s football team. During his 2013 run, an artist who drew an image for a Crosscut story referred to him as “the hometown star.”

But his high profile has always been more about his obvious leadership potential, intellectual ability and deep connections to the city, including both the Japanese-American and the African-American communities. The family of his African-American father, longtime City Light employee Clayton Harrell Sr., left Louisiana for the Northwest during World War II, a time when the Great Migration of black families from the South was in full gear. Harrell’s mother, Rose Tamaye Harrell, was sent to the Minidoka incarceration camp during the war.

Nate Miles, an African-American civic leader and vice president for Eli Lilly and Company, said his mother’s experience had a big influence in shaping Harrell as a person of drive and integrity. “There were some very, very tough times that his mother had to go through, not just [Minidoka] but being married to an African-American man,” Miles said, referring to prejudices at the time not only in the white community but also among some Asian Americans. A lesson that she instilled in her children: “You never let anybody hold you down.” But the Japanese-American community embraced him, and “he never forgot that community,” Miles said.

Noting Harrell’s background in Seattle, Miles said, “He has very deep roots in this community. … He is certainly a native son.”

He described Harrell as someone who has always been a success  — he was valedictorian in high school before graduating from the UW and then the UW Law School — because he is willing to work harder than rivals. Asked whether Harrell may have slowed down at City Hall in the wake of his 2013 primary — where there has been an undercurrent of grumblings about whether Harrell has been putting in long enough hours — Miles said people ought to take a closer look. “Anybody who reads that into Bruce should check with Bruce,” he said. “Bruce has the heart of a lion.”

Miles said that in addition to intelligence, integrity and a willingness to work hard for others, Harrell possesses an even temper, which could help in a sudden transition at City Hall. “If we are going to have a topsy-turvy time in our city,” he said, “he is exactly what we need.”

Former Mayor Wes Uhlman, who had supported Murray staying in office, warned that the transition won’t be easy for anyone. Uhlman is a longtime supporter of Harrell, having served as finance director for his 2013 campaign. Speaking shortly before Murray decided to resign, Uhlman said, “Bruce is a smart guy, but it would take him a while to get up to date and then the time would be up.”

But there’s a famous story about Harrell, somewhere around age 12, meeting then-Mayor Uhlman at his office, and Uhlman spotted his potential, encouraging him to run for office in the future.

Former Executive Sims, who is traveling and hasn't talked to Harrell about Murray's resignation, said Harrell would be a good mayor. "But," he said, "I don't know how you leave your mark in three months."

Miles said, “I, for one, certainly thought that he would have been mayor maybe a long time ago.” And might have risen to higher office by now in a system that needs such capable leaders, especially ones of color, he said.

Still, even if Harrell becomes the next mayor for just a short period, he said, “I think it is going to be a fun ride.”