Bruce Harrell is mayor but that could change 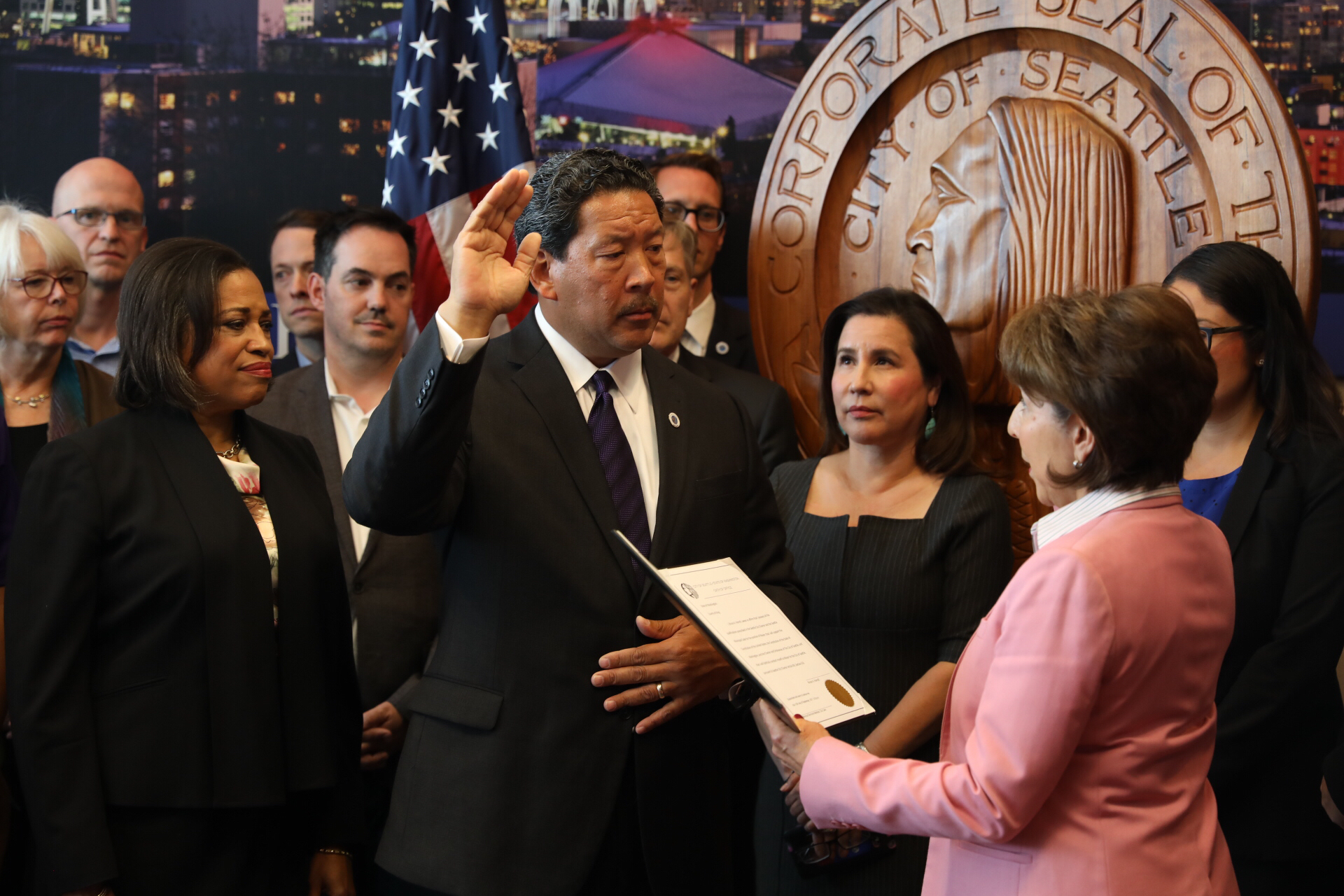 The councilmember of ten years — son of a Japanese-American mother and African-American father, a onetime linebacker and captain of the University of Washington football team, a high-school valedictorian and UW Law School graduate — was sworn in as Seattle’s 54th mayor Wednesday.

The scene on the seventh floor of City Hall, in the Norman B. Rice room outside the mayor’s offices, was the hope of the one-time mayoral candidate, but almost certainly not under these circumstances. He will be filling the void of his political ally Ed Murray, who, in a short note Wednesday, officially resigned the mayor’s office after five separate allegations of sexual abuse against minors.

But Harrell, flanked by the majority of the Seattle City Council and a slew of city officials, most of them hired by Murray, was optimistic as he was being sworn in. "Our duties transcend a person or an office, but indeed extend to every person in Seattle," he said.

“Now is not the time for division or for taking sides," he continued. "For me, it’s a time for healing. ... How can this issue facing our city bring out the best in ourselves?"

Harrell will not be mayor for long, that much is sure. But exactly how short his term will be is still unclear: As Council President, his swearing in Wednesday was inevitable, per the city charter. But now he must decide within five days whether he will serve as mayor through Nov. 28, when either Jenny Durkan or Cary Moon will be sworn in. That would mean giving up his seat on the City Council, cutting his term short; his term ends in 2019.

If he chooses to remain as mayor, it would almost certainly be Harrell's last job in City Hall. With no time to bring in his own staff or, realistically, shape his own budget, the upsides may be only symbolic. Former King County Executive Ron Sims said Harrell would be a good mayor. “But,” he said, “I don’t know how you leave your mark in three months.”

If he declines the mayoral role, Harrell will be free to complete his term in office and run again in two years.  The City Council, meanwhile, would have 20 days to vote in someone else to officially replace Murray. If that happens, all signs point toward one of two councilmembers, Tim Burgess or Lorena González, stepping in, neither of whom need to worry about losing their council seats: Burgess is retiring and González is likely to win re-election in November.

Harrell said Wednesday that he'd set a "personal deadline" to make a decision by 5 p.m. Friday. If he declines, he said he encourages the council to vote on the interim mayor on Monday, Sept. 18.

Harrell has built his reputation on the council as an advocate for police and criminal justice reform. Throughout nearly all of his tenure behind the dais, he’s fought to equip the police department with body cameras, his frustration occasionally showing as the effort has dragged.

He also spearheaded Seattle’s effort to “ban the box,” which limits employers’ ability to ask about applicants’ criminal history.

At times, Harrell has clashed with young activists over his support for the county's new youth jail and construction of a new North Precinct police station. He was re-elected in 2015 by a surprise, razor-thin margin over Tammy Morales, a member of the city's Human Services Coalition and an advocate for food justice.

Harrell represents south Seattle and is proud of his connections to the community, playing basketball at a local gym, touting his familiarity with local business owners.

Noting Harrell’s background in Seattle, Nate Miles, an African-American civic leader and vice-president for Eli Lilly and Company, told Crosscut, “He has very deep roots in this community. … He is certainly a native son.”

As the allegations against Murray built, Harrell was one of a majority on the city council to decline demanding the mayor’s resignation. “The people of Seattle, in my opinion … did not ask us to judge anyone for something that happened 33 years ago or maybe didn’t happen. … I wouldn’t want to be judged for something 33 years ago.”

Speaking to those comments on Wednesday, Harrell said they were taken out of context, saying that if a "heinous act" was committed 30 years ago, that person should indeed be held responsible.

"I'm very close, closer than I'd like to describe publicly, to the issue of abuse," he said.

Noting that in the coming months, the "highest priority" will be the budget, Harrell hinted that the council would likely seek more money for victims of sexual abuse.

Regardless of who finishes Murray's term, either Moon or Durkan will nonetheless have less time than is usual to transition into office. With that in mind, Harrell's first act as mayor was to sign an executive order codifying processes for a smooth transition, which fold both Moon and Durkan closer into the process, even before the election.

Meanwhile, former Mayor Ed Murray was nowhere to be seen.