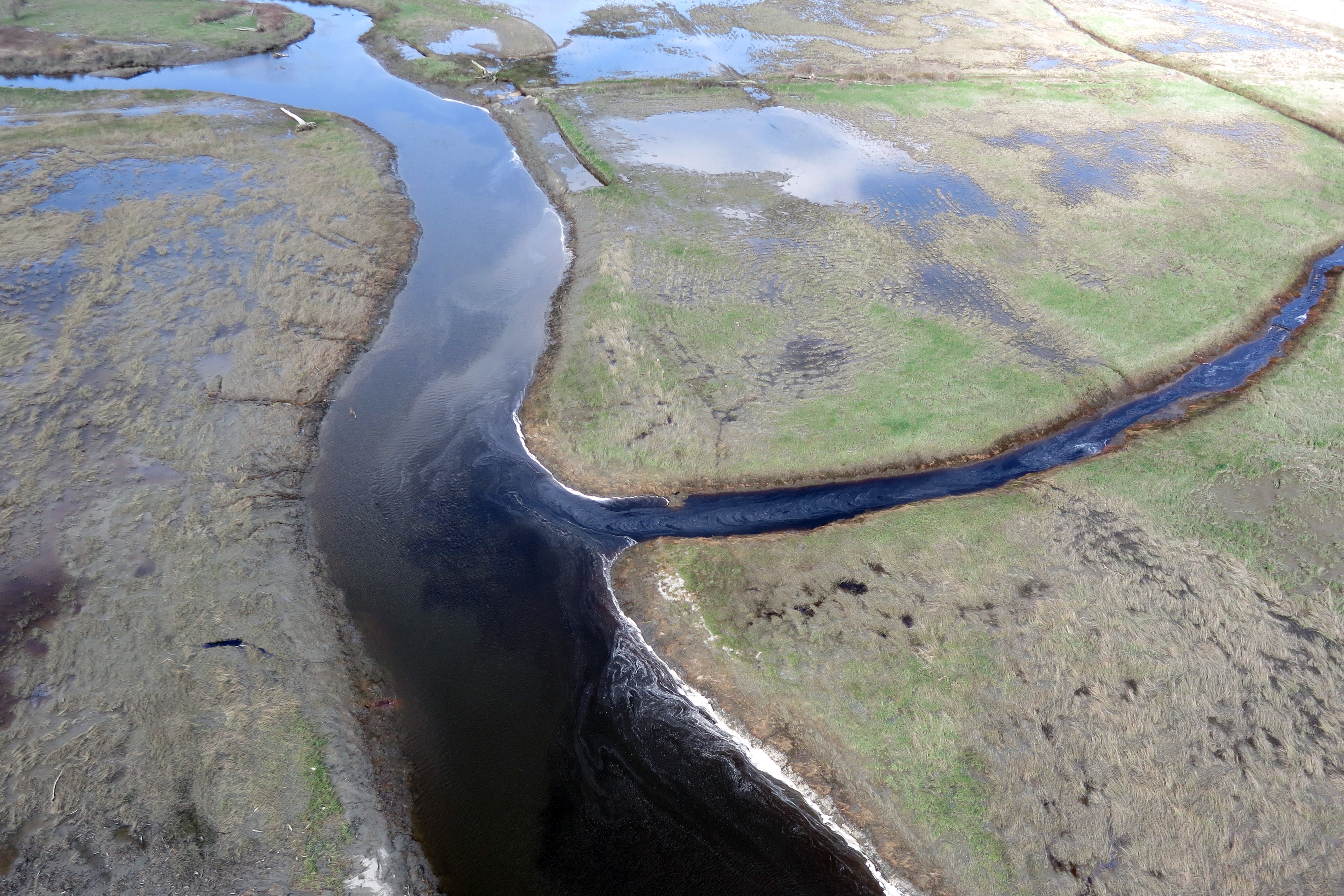 If we want more of our iconic but endangered black-and-white Puget Sound orcas, we might want to start by providing more mud. The same is true for the region’s other endangered marine symbol, chinook salmon.

It's simple: Salmon depend on healthy habitat, including muddy areas along the edges of Puget Sound’s estuaries. And a southern resident killer whale eats salmon. Chinook salmon.

Research indicates that most of the year, the orcas eat almost nothing else. In late summer and fall, when other salmon species are more abundant, they branch out. If there were more chinook, AKA king, salmon, they might branch out a lot less.

Some chinook are swimming up the Snohomish, the Skagit and other Puget Sound rivers — and, north of the border, up the Fraser — as we speak. But not enough of them: Puget Sound chinook themselves were listed as a threatened species in 2000. Four chinook populations in the Columbia River system, at the mouth of which killer whales feed at the end of a hard winter, are also listed. Other Columbia River runs — including the huge "June hogs" that once spawned above the site of Grand Coulee Dam — have gone extinct. Arguably, the whales are starving.

This summer, Sam Wasser, director of the University of Washington’s Center for Conservation Biology, and colleagues came up with significant new information about the chinook shortage's impact on orcas: They wrote in PLOS ONE that food scarcity — salmon scarcity, really — seemed responsible for failed pregnancies among the whales. "Low availability of Chinook salmon appears to be . . . a significant cause of late pregnancy failure, including unobserved perinatal loss," they wrote.

They also noted the indirect effects of hunger for the orcas in Puget Sound, which is laced with toxic substances. Some of the toxins find their way into the killer whales' bodies. All else being equal, toxics are stored in the whales' fat, where they do little or no harm. But if the animals don't have enough to eat, they mobilize their fat reserves, pulling the toxics into their metabolism.

"[R]elease of . . . toxicants during fat metabolism in the nutritionally deprived animals may also [contribute] to these cumulative effects. Results point to the importance of promoting Chinook salmon recovery to enhance population growth of Southern Resident killer whales.”

So, for a variety of reasons, killer whales need more chinook, and the chinook need a thriving Salish Sea ecosystem.

Like other salmon, they are threatened and limited by the so-called 4 H's: habitat — or the lack thereof; hydro — i.e., the dams that keep them from getting to and from their spawning streams; hatcheries — the fish factories that crank out less-well-adapted but much more numerous competitors; and harvest — i.e., the tendency for people to catch more salmon than they should for fun and profit, and for state and tribal governments to let them. Basically, they need clean, cold spawning streams, an unobstructed path to the ocean and back, favorable conditions out beyond the shore — and between fresh water and salt, most of the ones in Puget Sound need a place to hang out, sometimes just inches above the mud.

There, the Chinook hit a bottleneck.

University of Washington research professor of aquatic and fishery sciences Charles Simenstad explains that there are two basic types of chinook, one of which stays in freshwater for a year or so, then heads out to salt water almost immediately. The other moves downstream much sooner, then lingers in the estuaries. Virtually all the Puget Sound chinook runs are the second type. For them, the more time they spend in the estuaries, the bigger they are when they head out and the more likely they are to survive. And, Simenstad explains, "The bigger you are, the higher your survival [rate].”

But there's a problem: Estuary habitat around Puget Sound — and around most of the U.S. coastline outside of Alaska — is mostly gone. It's all economics: In a natural estuary, the ground is too squishy to build on or even plow, the channels too shallow and inconsistent for big ships, so people have mostly gotten rid of them. Perhaps 88 percent of the Skagit River’s original delta is gone, Eric Beamer, research director of the Skagit River System Cooperative which manages natural resources for the Sauk-Suiattle Indian Tribe and the Swinomish Indian Tribal Community, has found.

And just look at the Duwamish in Seattle. Salt marsh and little channels used to fill the whole area between Beacon Hill and the heights of West Seattle, pushing up to the edge of what is now Pioneer Square. Now, the polluted Duwamish is confined to a single channel, and the whole area is covered by container piers, streets, buildings and railroad tracks.

No one is going to unpave its estuary. Where the competition is defunct dairy farms, though, estuaries are being restored. No one wants to put farms out of business, but economics have already done a lot of that. Simenstad describes dairy farms, "past their era of production," on which "people are paying taxes on land that is, for most families, no longer a functional living." It’s happened most notably on the Nisqually, where turn-of-the-20th-century dikes that once protected a dairy farm were breached in 2009, but there are many smaller projects, including some at the mouths of the Skagit and Snohomish rivers north of Seattle.

Near the mouth of the Snohomish, just north of Everett, the Tulalip Tribes have spearheaded a project that has taken $20 million and 20 years. The long process of restoring the Qwuloolt Estuary — the name is Lushootseed for "marsh" — began when a turn-of-the-20th-century dike was breached in 2015. The project has relied on money from a variety of agencies, including the U.S. Army Corps of Engineers (the largest contributor), the state Salmon Recovery Funding Board, and NOAA.

This project brings the amount of restored or retained habitat in the Snohomish estuary to 11 percent of its original area, says Todd Zackey, marine and program manager for the Tulalips' natural resources department. Surveys from the 19th century show the estuary’s extent before dikes were built, Zackey says. Other projects already in the works could bring the total up to almost half.

Most people who visit the estuary have no idea what it should look like, he explains as he takes a visitor through the estuary in a 20-foot aluminum jetsled — heading out through the estuary in an aluminum jetboat, winding through the wider channels, passing narrower channels where the water rushes through, mud flats covered with grass, some with brush and even alders. People see alder and big-leaf maple and figure that's nature, he says. If you look around, though, you'll find big stumps of the Western red cedar that used to grow here. That's nature, Zackey says.

He idles the boat off Heron Point, dark with small Sitka spruce, an island of three dimensions in a largely two-dimensional landscape. Zackey explains that some of those scruffy trees are up to 600 years old. They grow on land that stands well above water. Getting them there takes a long time, Zackey explains: Sediment builds up, trees grow and die, nurse logs keep new trees above the tides. With the vertical dimension, hummingbirds and songbirds can use the area, not just the shorebirds found elsewhere in the estuary. "That is the goal," Zackey says. Getting there may take a century or two. The Tulalips are in this for the long haul.

That Sitka spruce habitat has become very rare. Up to 98 percent of Puget Sound's forested tidal swamps have been lost. Looking at the spruce, Simenstad says, "Those are the tough ones. The Sitka spruce swamps are 300 years to 400 years in the making."

Still, he says, once dikes are breached, "we've seen fish occupying those ecosystems immediately." The channels around a place like Heron Point are more complex than the new ones, Zackey explains: The wild berry bushes provide more kinds of food, the spruce branches shade and cool the water; it's what juvenile chinook habitat should be. However, he says, "Chinook are already utilizing the Qwuloolt site." The terrestrial vegetation on the muddy banks is still in the process of dying out — littering the water with dead plant matter, which attracts bugs that juvenile chinook eat. Young fish "hang out in the shallow areas along the edge of channels to avoid predation."  Bottom line: It takes decades for the ecosystem to fully recover but the salmon are already there.

Beamer says, "If you breach a dike or set it back, you immediately get some kind of inter-tidal habitat."

Without that habitat, it won't matter how many chinook fry are produced upstream; only a limited number will survive and return. Zackey and Simenstad both point to Beamer's research on the size of estuaries. "The amount of space in an estuary [and the connectivity of its habitat] can limit the number of chinook salmon fry that hang out there and ultimately the survival and return of those fry as adult salmon," Beamer explains.

If limited habitat is flooded with hatchery fish, some people argue that wild chinook populations won't have much chance. If the ultimate goal is restoring wild runs, the presence of all those hatchery fish — one of the classically menacing 4 Hs — in that limited space is a major problem, says Wild Fish Conservancy executive director Kurt Beardslee. "You're filling this limited space with these [hatchery] fish that have a low chance of returning as adults," he says.

What about the argument that tribes, at least, have right to catch salmon, and without hatcheries, they won't have a whole lot of salmon to catch? "We have treaty obligations in perpetuity," Beardslee responds. "If we allow management today to be taking away from future generations, I say we're in violation of our treaty obligations."

If there weren't conflicts with other uses and users, estuaries would never have been destroyed. As it is, barriers to restoring habitat may be less physical than political. Restoration is "only going to happen with a willing community," Simenstad says.

And the community will only be willing if its members think restoration is going to work. "There's multiple audiences that need to hear [that restoration is really going to do some good]," Beamer says.

He adds, “I want to remove the absence of information as the roadblock. At least we can remove it as an excuse for not getting things done."

He talks about "a Puget Sound conversation" in which "we sort of play out what our values are really: Is it lip service that we want to recover salmon, or is it real?"

For chinook salmon and the orcas, a real commitment means restoring a lot more of those muddy estuaries. Without that, they're toast.