The burning of the Columbia Gorge is a tragedy 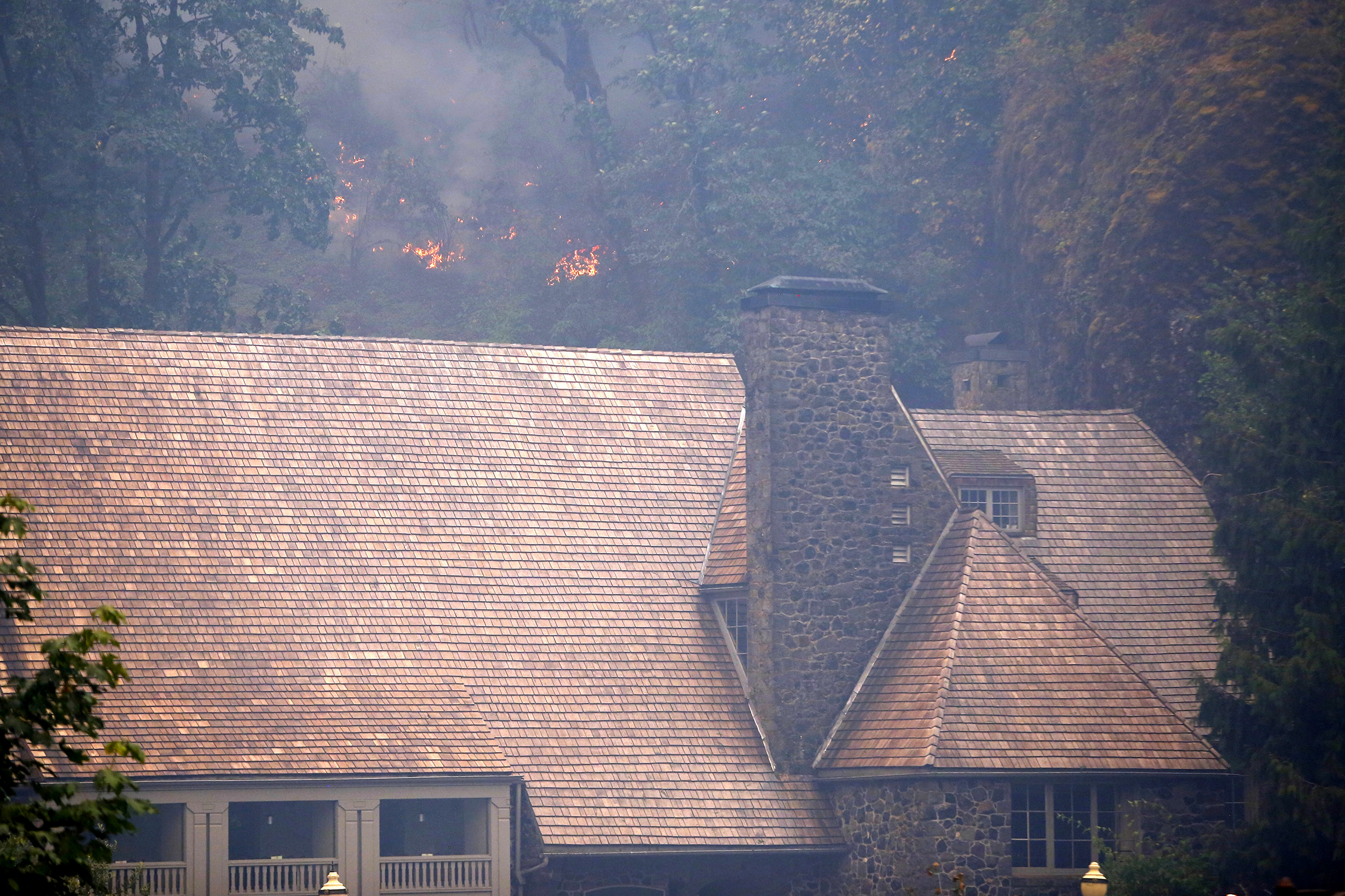 The Eagle Creek fire has been burning in the Columbia River Gorge since Sept. 2 and threatened the Multnomah Falls Lodge Tuesday, Sept. 5. The growing blaze east of Portland, Oregon, was one of dozens of wildfires burning in western U.S. states that sent smoke into cities from Seattle to Denver.

Yellow skies and red suns: Seattle is literally inhaling the remnants of Northwest forests as fires ravage the region, from western Montana’s Glacier National Park to Central Washington, from British Columbia to the Columbia Gorge.

A legacy of history and landscape is going up in smoke that unsettlingly keeps settling over Puget Sound. The reality of the wilderness devastation has drifted down in a light dusting of snowy ash. Seattle is a city that worships the outdoors — the only city, writer Jonathan Raban once said, that people move to in order to be closer to nature. This is the downside of that closeness: death of what we love.

Particularly galling are the Eagle Creek and Indian Creek fires on the Oregon side of the Columbia Gorge and spot fires that have leapt to the Washington side; the latest estimate is that these fires are consuming over 30,000 acres and won’t be fully out until the end of September. You could not pick a more iconic spot to destroy, or one of more importance, resonance and potential economic impact. This is where dams generate and transmit public power. This is where salmon migrate. This is a vital shipping and transportation corridor linking to the Pacific and both sides of the Cascades.

The Gorge is an epicenter of Northwest history too, where for millennia native peoples hunted, fished and traded, a gathering place for tribes of the entire region. This is the artery that was used by the fur traders who began European settlement in what became Oregon Country. This is where Lewis and Clark passed through on their epic overland journey to pull the region into the sphere of American influence.

It is a sacred heritage landscape too. The Gorge is a place of petroglyphs and native gravesites, but also where people have marveled at its beauty since ancient times.

Hikers and tourists flock to the Gorge, easily accessible from Portland and Vancouver. The Gorge is a National Scenic Area. The stunning thing — with its forests, waterfalls, cliffs and viewpoints — is the sheer drama of the place. A major attraction is the 600-foot-high Multnomah Falls, the most-visited natural recreation site in the Northwest with more than two million visitors a year, more than Mt. Rainier. The falls were “engulfed in flames” this week, though the nearby historic 1925 Multnomah Lodge has been saved. But the Gorge will never be the same. Much of the beloved landscape is ravaged. Recovery will take generations.

If the Gorge is emblematic of natural beauty, the new Gorge might be an icon of human folly. Investigators believe the Eagle Creek fire was started by one or more teenagers playing with fireworks on one of the popular hiking trails.

At least one young boy was observed to throw lit fireworks into a tinder-dry canyon. Said a witness to Oregon Public Broadcasting, “When I came upon them, and the guy threw the firecracker, I’m pretty sure I heard a couple of them giggle. The guy was filming it like it was another thing to film, no big deal. The whole complacency of that group, I find it so disturbing."

Complacency. Cluelessness. Callousness. Cruelty. I get some of it. I was once a teenager with a mild fascination with fireworks. I’d like to think if I set a forest on fire I would have gone for help. It is hard to comprehend the damage a few idiots can do.

Teenagers, ultimately, aren’t the worst problem. While this fire appears to have a specific human cause, the fires in the West, just like the powerful hurricanes in the south, underscore the predictions of climate change models which suggest greater wildfire danger, stronger storms and more extreme weather.

If teenagers lighting matches can erase the natural and human legacy of millennia, what do we say of the adults who are in denial about climate change and its consequences? Or worse, the adults in charge who are actively thwarting measures to mitigate its effects? What do you say to the dismantlers of the Environmental Protection Agency or the promoters of using more fossil fuels? What do you say to those who proposed to cut funds for FEMA, floods and firefighting? These are the modern Neros who fiddle while we burn.

When it is safe again to visit the Columbia Gorge, and we gaze out on the charred landscape, we’ll have something more to contemplate than nature’s beauty: how do we stop human stupidity?