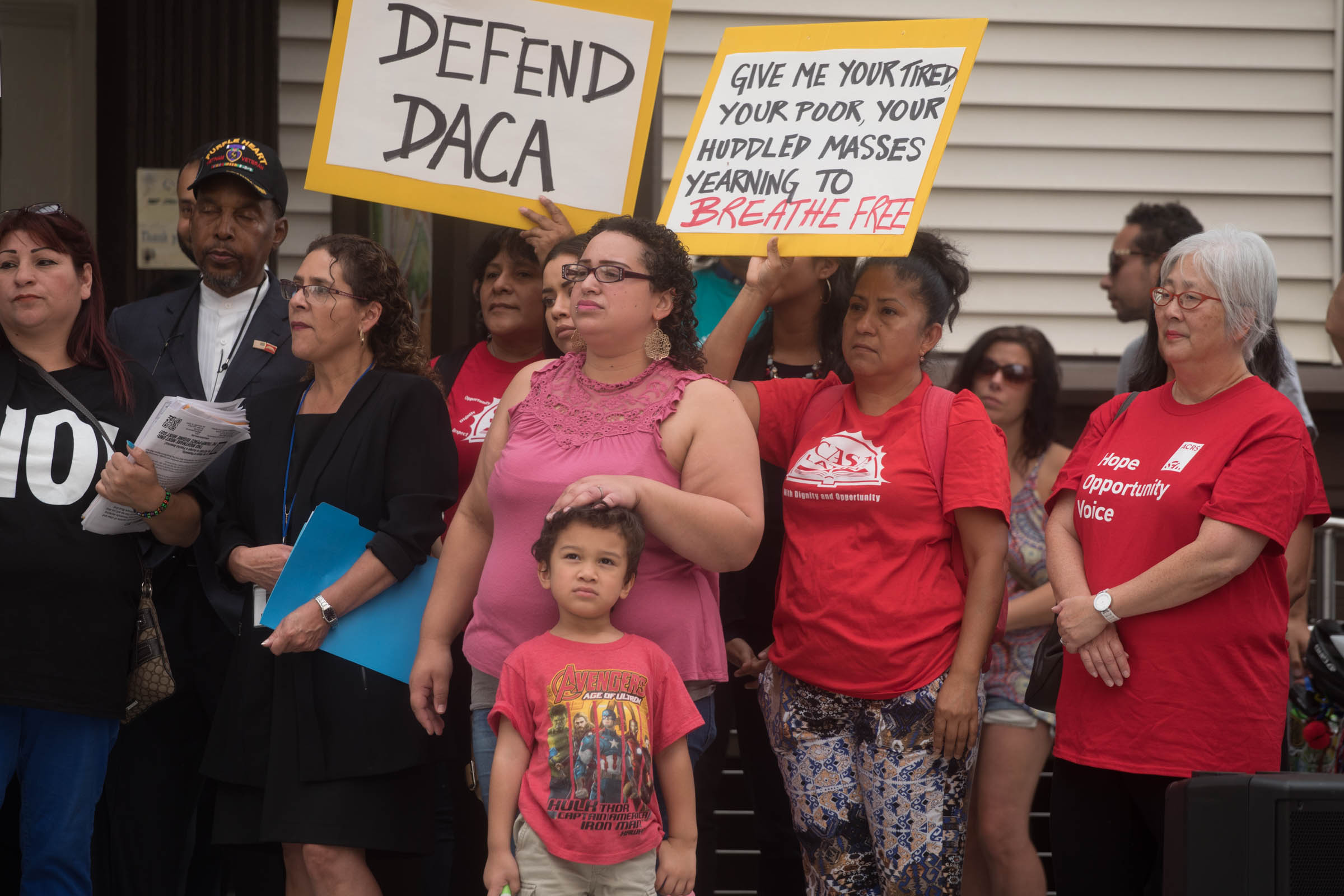 Protesters who will be directly affected by President Trump's rescinding of DACA stand on stage together during a rally at El Centro de la Raza in Seattle, Tuesday, September 5, 2017.
(Photos by Matt M. McKnight/Crosscut)

Hours after the Trump administration announced on Tuesday that it planned to end the program known as Deferred Action for Childhood Arrivals, or DACA, hundreds gathered at El Centro de la Raza in Seattle’s Beacon Hill neighborhood for a rally dedicated to standing up for the nearly 1 million undocumented immigrants in the United States impacted by the decision.

Representatives from a wide coalition of groups — the Seattle Human Rights Commission, Planned Parenthood, Faith Action Network, Casa Latina, among others — stood with undocumented youth and other activists to shout “Whose streets? Our streets!” and “No DACA, no peace.”

Politicians such as Seattle mayoral candidate Cary Moon stood alongside toddlers holding protest signs. A long list of speakers spoke about why they believed the Trump administration’s decision to end DACA, a program that grants two-year work permits to children who arrived illegally in the United States when they were young, was wrong.

Cinthia Vazquez, an organizer with the nonprofit Washington Dream Coalition, explained that unless Congress acts, no new DACA applicants will be accepted. Vazquez also noted that the DACA program doesn't fully expire until March 5, 2018 and that some recipients can renew their permits as long as they do so by Oct. 5.

Vazquez called the decision to terminate the program “cruel and immoral.”

Another organizer with the Washington Dream Coalition, Paul Quiñonez, a legislative aide in the Washington State House of Representatives, said that those who are undocumented “shouldn’t have to constantly justify their existence.”

“Our humanity should be recognized,” Quiñonez said.

“The coward in the White House didn’t even have the courage to face us,” Quiñonez continued, referring to the fact that it was Attorney General Jeff Sessions who had announced the end of the program and not Trump.

One of the highest profile speakers was Attorney General Bob Ferguson who said he was working with attorney generals from other states — such as California — to sue the Trump administration. Ferguson noted he had already sued the administration 14 times and that he had won four of those lawsuits and lost zero.

“The president’s announcement is as dark as it gets,” Ferguson said. Terminating DACA isn't just cruel and inhuman, Ferguson said, it's also illegal.

“In a courtroom, it is not the loudest voice that prevails,” Ferguson said, but “the rule of law.”

“This is a president who regularly and perversely goes after the most vulnerable,” said Habib, who pointed to Trump’s recent ban on transgender people in the military as another recent example of the president’s attacks on the powerless in society.

“We want you to know, we love you,” Habib said to the undocumented youth in the crowd. “You are the best among us.”

Aneelah Afzali, a leader in the local Muslim community, stood on stage wearing a hijab and flanked by other faith leaders. "Our religions and faith values command us to do good to strangers as an act of righteousness," Afzali said.

"Living with the fear of family separation, community raids, and deportations harms the mental and emotional well-being of the undocumented members of our human family. This goes against our faith teachings. It is morally, religiously, and socially wrong."

Many of those present at the rally spoke about asking Congress to pass the new DREAM Act, which was introduced earlier this year. The bipartisan bill goes further than previous versions: Undocumented immigrants who go to college or serve in the military and also those in the workforce are eligible. And unlike DACA, it would provide a path to citizenship.

They also spoke about the tech industry's support of DACA recipients, these so-called Dreamers. Earlier today, Microsoft president Brad Smith announced that his company would fight deportations in court.

Jane Ruttledge, a 66-year-old Seattle resident, wore a shirt from the Women’s March held in Washington D.C. in January. She called the current administration "racist, bigoted, misogynist.” She attended the rally because she believes undocumented immigrants “are citizens as much as anyone else in America.”

Ruttledge said she's been involved in protests for 50 years and that she planned to continue speaking out.