On climate, western governors pick up where Trump left off 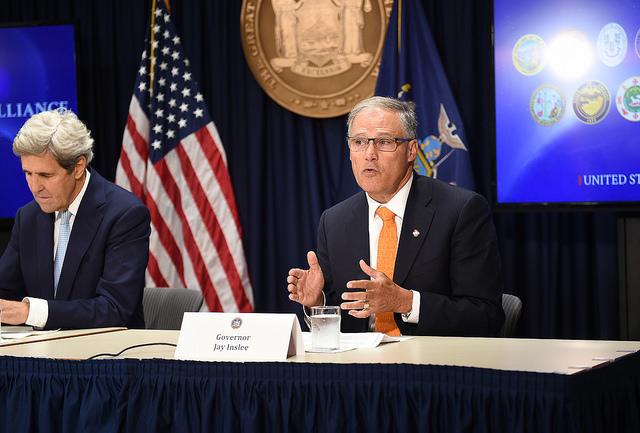 The governors of California and Washington traveled to New York City last week to send a strong, simple message to world leaders gathered for the United Nation’s annual General Assembly. When it comes to acting on climate change, “you can count us in,” Washington Gov. Jay Inslee said.

During its meetings with world leaders last week, the Trump administration reiterated the president’s plans to withdraw from the 2015 Paris Climate Agreement unless it can be renegotiated. Inslee and California Gov. Jerry Brown joined New York Gov. Andrew Cuomo in New York to counter President Donald Trump’s message and his aggressive efforts in recent months to rescind national policies designed to reduce greenhouse gas emissions.

The three governors are co-chairs of the U.S. Climate Alliance, a group of 14 states plus Puerto Rico formed in June to coordinate and showcase state-level action. Oregon and Colorado are the other Western states in the group. “This is about controlling our own destiny,” Inslee said during a press conference Wednesday with the other governors. “There is nothing that Donald Trump can do to stop us in our states from advancing these policies.”

The three governors, all Democrats, also participated in a roundtable with environment ministers from around the world at the United Nations two days earlier. They hope that by highlighting individual states’ determination to keep acting on climate change, other countries will be less likely to follow Trump in rejecting the Paris Agreement. Because California has long been a leader in policies to address climate change and Brown has frequently attended international climate change meetings, world leaders are aware that it and other states have forged ahead with — and without — federal leadership.

“We are a political and economic force; and we will drive the change that will get us to the climate goals that we have to reach,” Brown said at the press conference. For instance, states have the authority to set policies to reduce emissions for power plants and other industrial facilities in their states and can coordinate with other states to reduce emissions. They can set incentives and requirements to increase the use of renewable fuels like solar and wind and phase out dirty fuels like coal. They also can cut pollution from cars through low-carbon fuel programs that require refineries to reduce emissions from gasoline and diesel and zero-emissions vehicle programs that require automakers to sell electric cars. But fuel economy standards — the strongest policy tool for limiting greenhouse gas emissions from cars — are set by the federal government. And, unlike the federal government, states can’t require other states to cut emissions.

In the future, states can also drive key advances in climate policy, such as developing a sophisticated electric grid to accommodate more renewable power and multi-state networks of recharging stations for electric vehicles.

To emphasize that their combined actions are making a difference, the governors released a report that shows collective greenhouse gas emissions of the 14 alliance states dropped 15 percent between 2005 and 2015. And with policies already adopted in their states, they are projected to cut emissions 24 to 29 percent below 2005 levels by 2025.

The governors haven’t announced new joint initiatives yet, but they plan to do so in Bonn, Germany in November during the next UN climate change conference, according to staffers. Inslee and Brown both plan to attend. Because climate change is a global problem, international and federal action is most important. But by rejecting so many climate change policies, Trump has elevated the significance of state leadership. “Subnational action is now more important than it’s ever been,” says Robert Stavins, a professor of energy and economic development at Harvard University. “But saying that (state actions) are important, is not the same thing as saying that they are an adequate substitute for what would happen with federal policy.”

While the governors tried to present a unified front, the level of commitment to climate action varies significantly among states in the alliance.

All these state-level actions matter much more since Trump abandoned the U.S. role of leading by example and shepherding other nations’ responses to climate change. Sen. John Kerry, who as President Barack Obama’s secretary of state helped lead the nations of the world to coalesce around the Paris Agreement, lauded the states’ efforts. “Trump forfeited American leadership,” Kerry said at the press conference with the governors. “The leadership of governors and the leadership of corporations coming together is what is going to really save us here.”