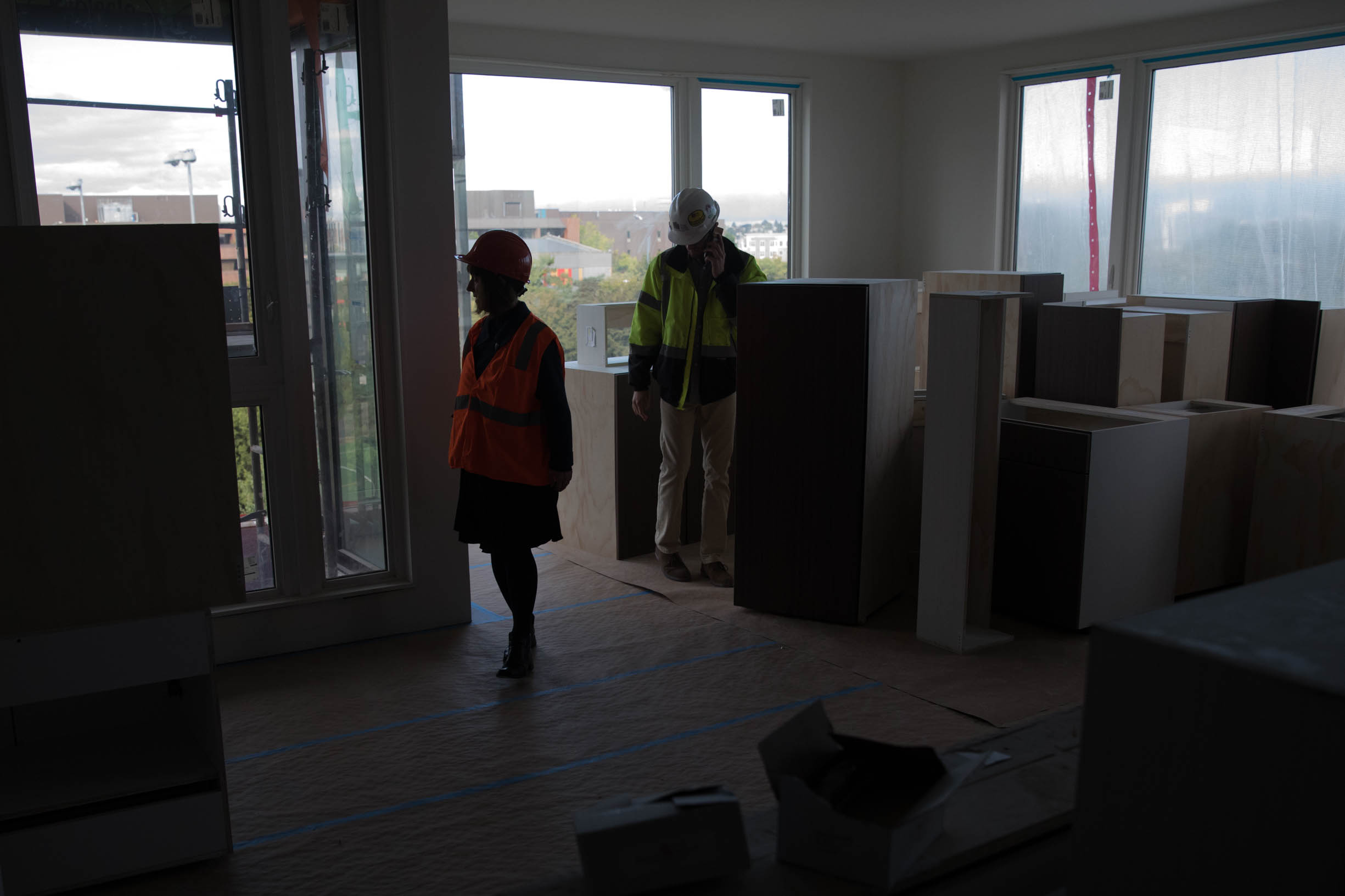 Tree Swenson, Executive Director at Hugo House stand inside the new Hugo House building with Exxcel project manager Sam Bernoski. Hugo House may have to put the brakes on reconstructing its new building in Capitol Hill because of the state Legislature.

Fiction writers — novelists, short storytellers and aspiring novices — tend to be white in Seattle. To Sonora Jha, Hugo House’s writer-in-residence, writers of color have been underrepresented. While she is now seeing more diversity within classes at Hugo House, its mission could be the latest victim of gridlock in Olympia.

The fallout of the Washington State Legislature’s failure to pass a $4 billion capital budget last summer, has created worry for the organization.

“Hugo House is kind of like an extended living room. … It’s more than a gathering place, it’s about making local connections,” said Jane Wong, a former Hugo House instructor and a poet. “It’s not a bubble, but a familiar space for new writers, emerging writers … It has this warmth to it.”

The recent struggles for Hugo House all trace back to a 2016 Washington Supreme Court decision — the so-called Hirst ruling — which blocks landowners from digging new wells if they can't prove it won’t threaten nearby stream levels needed for fish. The ruling essentially halted construction of homes and businesses in many rural areas.

In 2017, Washington Senate Republicans threatened to deny the state budget's passage for $4 billion worth of construction-related projects if House Democrats wouldn’t give them the deal they wanted on the Hirst issue. The House Democrats’ final offer fell short of what the GOP wanted.

This resulted in the GOP’s refusal to pass the $4 billion capital budget. That proposed budget included $900 million for statewide school fix-it work, $130 million for work at the University of Washington and several other Seattle projects that range from classical music venues to a Filipino community center.

Three Seattle authors — Linda Breneman,  Frances McCue and Andrea Lewis — founded Hugo House in 1996 as a place to nurture writers. They named the establishment after Seattle poet Richard Hugo, who died of leukemia in 1982.

The original Hugo House resided across from Cal Anderson Park in a building built in 1902 that had previously held a funeral home and a theater.

“It was a cool Victorian building, but it was falling apart,” said Tree Swenson, executive director of Huge House. The old Hugo House had wasted space and tended to flood.

For now, the organization resides in First Hill, next to the Frye Art Museum. The old structure was torn down and is set to be replaced by a six-story condominium building, with the first floor dedicated to Hugo House. Whether or not they move back hinges on if they receive enough funding.

The first floor will have six classrooms instead of four, a modern auditorium and will be designed to accommodate more students and event attendees simultaneously. A limited liability corporation of Hugo House supporters will own the new structure.

Hugo House has raised about $4.8 million for construction, but it still needs slightly more than $1 million to start the work. That happens to be the amount the Legislature was supposed to appropriate before the state capital budget stalled.

Another “million is a pretty heavy lift for us…We don’t have deep-pocketed donors. We’re more of a grassroots organization,” Swenson said.

Consequently, a move-back date in early 2018 has been delayed indefinitely, and plans to expand classes and accommodate more students are in limbo as well.

Hugo House had been going through a growth spurt. In 2014, it served 2,125 writing students of all types — doubling its 2012 figure. It also hosts about 100 literary events a year.

“There nothing remotely like this in the city…It strengthens the community. It creates awareness around what is happening with local literature,” said Peter Mountford, a former Hugo House writer-in-residence and published novelist.

The students ages range from the teens to 80-year-olds — a much wider spread than students in college creative writing classes. Many Hugo House students also tend to be more interested and invested in these classes compared to some college students who take creative writing as an English requirement, said Wong, who has taught at Pacific Lutheran University and now Western Washington University.

Many writers who attend classes and events are looking to connect with other writers. “Writing is one of the most solitary of the arts,” Swenson said.

Writers say Hugo House fosters the back-and-forth of ideas, criticism and encouragement — especially when writers hit inevitable mental blocks. It also allows for beginners to dip their toes into writing.

“Hugo House is a great [place] get away from the solitude and bounce ideas off people,” Mountford said. “It keeps me fresh as a writer.”

No end is in sight on the deadlock regarding the Hirst ruling and the capital budget. So far, each party has been unmovable and persistent in criticizing the other side on the issue.

While Democrats have a decent chance of taking control of the Washington Senate in a November special election for the 45th District in Seattle's northeastern suburbs, the Senate GOP would still hold a trump card.

Even if the Democrats passed a capital budget, the Legislature would still need 60 percent approval of the bonds needed to finance that package. The Democrats significantly fall short of that percentage in both chambers.

So for now, Hugo House's future will hang on whether the two sides — with track records of endless deadlocks — reach a compromise on both the Hirst and capital budget issues.