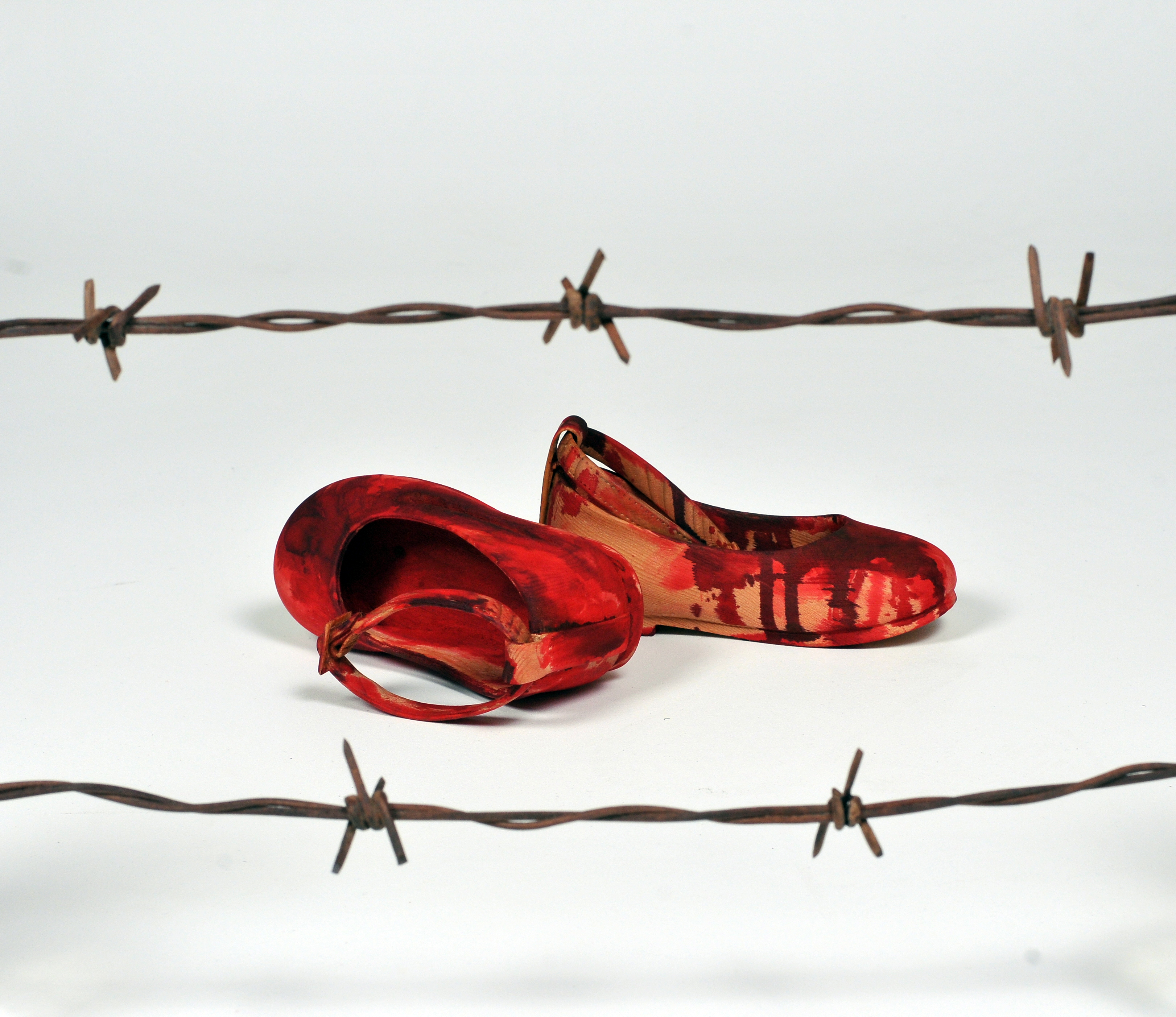 Searching for Home, the new solo show by local sculptor Humaira Abid, is confined to one room at Bellevue Arts Museum. But her striking imagery slips across traditional borders and takes up residence in the mind.

A native of Pakistan who moved to the Pacific Northwest in 2008, the 40-year-old Abid has earned international acclaim for her stunningly realistic sculptures of mundane objects — clothing, luggage, shoes — which she carves from wood and imbues with meaning. In her newest exhibit, the subject is the worldwide refugee and immigration crisis, but as in all her work, the political is personal and the perspective is decidedly feminist.

At BAM, a tall “barbed wire” fence (made of mahogany, which Abid painstakingly hand-carved into a believable facsimile) sparks an immediate sense of displacement and unease, as it prohibits visitors from entering the room directly. Stained and pocked with bullet holes, the wall opposite offers no comfort. Several miniature paintings, also created by Abid, hang askew and present the troubled faces of girls pictured in Associated Press photos from refugee camps.

In her research for this show, Abid says she interviewed refugees and immigrants who landed in Pakistan and the Pacific Northwest and learned that it’s usually the man of the household who tells the family’s story. “Women and children don’t get to tell their side.”

One of the questions that preoccupied her: What do women take with them in such sudden and stressful moves? A beloved blouse? A small family heirloom? In her conversations with immigrants she learned that when there is precious little time or room, basic necessities like feminine hygiene products often don’t make the cut.

Snagged on one of the fence posts is a pair of women’s underwear (carved from pine), softly draped and splashed with bright red blood.

“I grew up in a society where it was taboo to talk about sex, menstrual cycles, puberty,” she says. “Most girls there don’t know what a period is until the day it starts. I want to normalize these things so women are not ashamed.”

In previous work, Abid has shown a similar fearlessness in bringing women’s issues to the fore. Having had several miscarriages before the birth of her daughter (now 5), Abid was frustrated by the way women in her culture didn’t want to talk about this common occurrence, lest they get blamed for doing something wrong during the pregnancy. She has carved baby bottles and pacifiers to represent lost children, and for one show, a row of nine faucets, the third of which "drips" blood.

She’s been so bold as to show this work in Pakistan, where she still travels often and keeps a studio. “I was surprised,” she says of the reaction in her home country. “People appreciated that I was talking about it, and women opened up to me with their stories.” More than anything, Abid hopes her work will instigate conversation about topics that have a history of being unmentionable.

Abid says she became hyper-aware of injustices toward women after watching her older sisters perform tea ceremonies, part of the Pakistani courtship tradition by which a woman’s bridal caliber is judged. “I saw them doubting themselves and whether they were good enough,” she says. “So I decided I will never do that and will try to change that tradition.” (She happily reports that thanks to her raising such issues, her brother is now “the biggest feminist.”)

Another inequality she is actively working to right is the male-dominated field of sculpture. When she entered the National College of Arts in Lahore, Pakistan (yet another rebellion, as her family expected her to go to med school), she recalls, “Everybody warned me — don’t take sculpture!” But wanting to bring more women’s voices into the medium, she took it upon herself as a challenge. “I like challenges,” she says with alacrity. “I keep trying to find solutions.”

She relishes solving artistic puzzles, such as, how to carve a convincing suitcase from a block of wood. Several pieces of her hand-carved luggage are featured in the BAM show, some spotted with blood and crawling with ants. All of them are remarkably detailed, down to buckles, zippers, wheels and the puckered elastic band of the pocket inside the lid. How does she achieve such verisimilitude? “I go to Goodwill a lot,” Abid explains with a laugh. That’s where she seeks out objects resembling those she has in mind for a project. “I found the perfect suitcase there,” she marvels. Once she arranges the source objects in a composition, she says, she considers her tools. “I start to resolve problems.”

For her next show, she’s working on a series of sculptures that call out women’s oppression in Saudi Arabia. “Saudi Arabian women aren’t allowed to drive,” Abid explains. “And now there’s a ‘tempting eyes’ law, too. So if your eyes are too pretty, you’re violating the law and must wear a full veil.” Accordingly, she’s carving nine rearview mirrors from which beautiful eyes peer out at the observer — defiant, questioning and female.

[Ed. note: The law in Saudi Arabia banning women from driving was overturned a few days after this interview.]