If Dreamers were white: Why Washington is suing over DACA 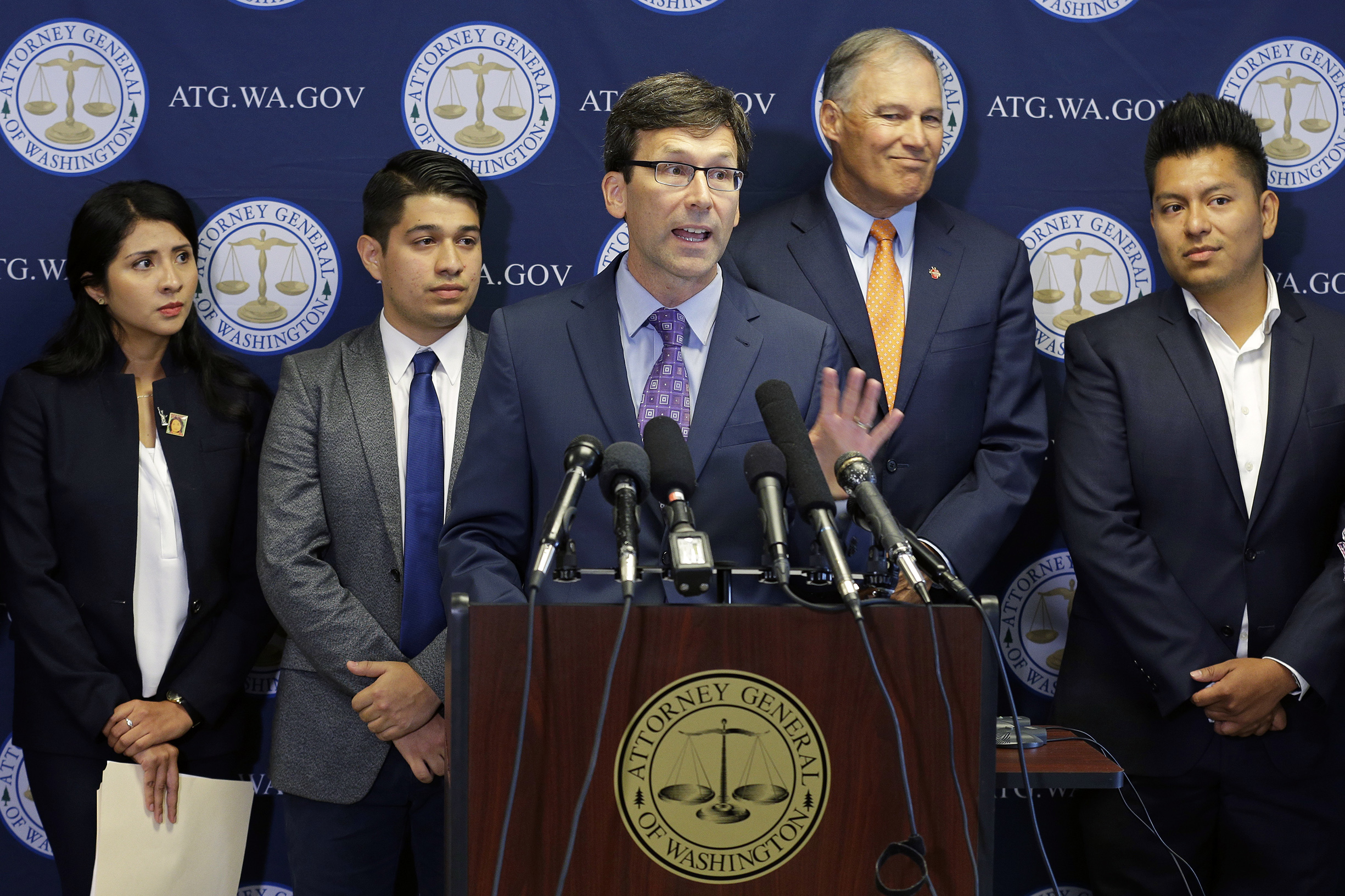 Washington Attorney General Bob Ferguson, center, talks to reporters, Wednesday, Sept. 6, 2017, in Seattle, as Washington Gov. Jay Inslee, second from right, and three participants in the Deferred Action for Childhood Arrivals, or DACA program, look on. More than a dozen states and the District of Columbia filed a lawsuit Wednesday to block President Donald Trump's plan to end the program.

This story has been updated to add new information.

At an emotional press conference in downtown Seattle on Wednesday, Washington Attorney General Bob Ferguson announced that Washington and 14 other states, in addition to the District of Columbia, had filed a lawsuit against the Trump administration over its decision to end the Deferred Action for Childhood Arrivals program, otherwise known as DACA.

"If the overwhelming majority of Dreamers were caucasian, does anybody really think this president would take the action he took yesterday?” Ferguson said.

As proof of President Donald Trump's racial animus, Ferguson pointed to statements the president had made on the campaign trail, such as referring to Mexicans as "killers" and "rapists."

"It's outrageous," Ferguson said, near tears. "I'm not going to put up with it."

"When it comes to Washingtonians being harmed, it does not get much bigger than this," Ferguson said, explaining his rationale for filing the lawsuit. "Put yourself in their shoes." There are an estimated 800,000 people who are DACA recipients nationwide; 17,000 in Washington state. Nearly 80 percent of DACA recipients are of Mexican descent, according to the attorney general’s office.

The lawsuit also alleges the government has backtracked on the promise that it made to DACA applicants. The Department of Homeland Security, the lawsuit claims, assured DACA applicants it would not later use the personal information provided for immigration enforcement purposes. The latest DHS advice to DACA recipients, updated Tuesday, says only that the information won't generally be offered to law-enforcement agencies "proactively," and DHS warned that the limited reassurance could change at any time.

Inslee criticized Trump for not making the announcement about the end of the DACA program himself, saying, "The president did not even have the common decency to face the American people."

But, Inslee added, "let's be clear, it is his hand on the knife in people's backs."

"You cannot trust Donald Trump on anything," Inslee said. "It is an administration based on deceit."

On Tuesday, U.S. Attorney General Jeff Sessions announced that the Trump administration had decided to end DACA, which was established in 2012 by President Barack Obama. The program offers two-year work permits to those who have been in the country illegally since they were children. To qualify for the program, recipients must undergo a thorough background check; be under the age of 31; lived continuously in the United States since 2007. DACA applicants also pay a $495 fee.

Opponents of DACA argue Obama's creation of the program, via executive order, was unconstitutional. Trump has asked Congress to replace the DACA program with legislation before it fully expires on March 5, 2018.

Ferguson has sued the administration 14 times and has so far won four of those lawsuits. Earlier this year, Ferguson sued Trump over the Muslim travel ban, which resulted in a federal judge blocking it.

Ferguson vowed to "use every legal tool I have at my disposal" to fight the administration's DACA decision.