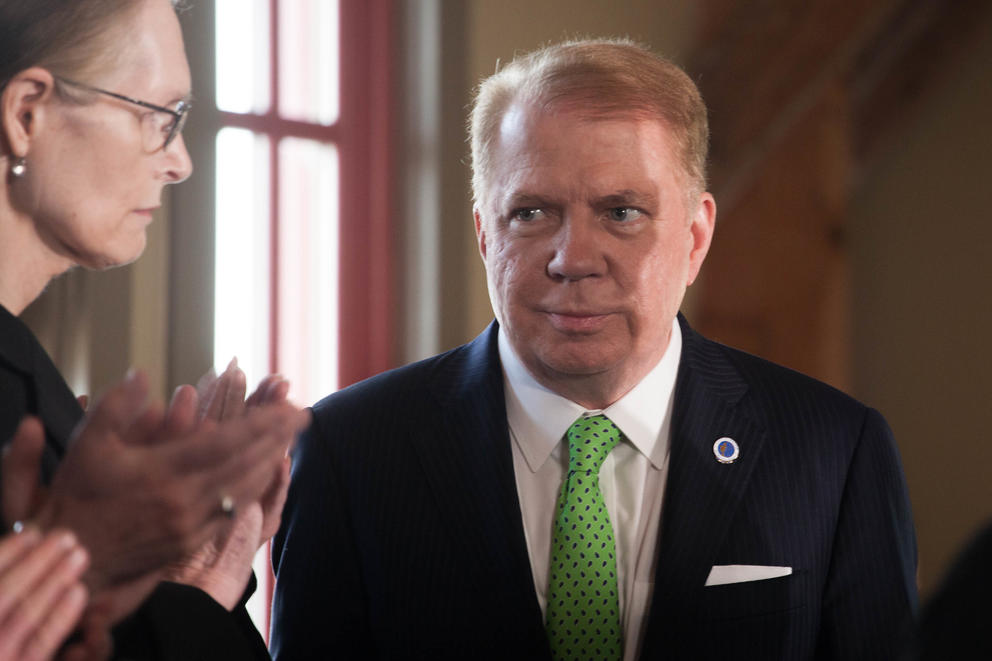 Seattle Mayor Ed Murray announces the end of his campaign for re-election at Alki Bath House along Alki Beach in West Seattle, Washington on May 9.

“I am announcing my resignation as mayor, effective at 5 p.m. tomorrow," he said in a statement.

“While the allegations against me are not true, it is important that my personal issues do not affect the ability of our City government to conduct the public’s business.”

Seattle’s new mayor will be Council President Bruce Harrell, per the city charter. Harrell then has five days to decide whether he will complete Murray’s term, which ends January 1.

Murray, who earlier this year touted a 60 percent approval rating and momentum enough to all but guarantee his re-election, was blasted with sexual abuse allegations the past six months. As new accusers and documents came forward, combined with his assailing of his accusers’ credibility, more and more people called for him to step down.

Although Murray dropped his bid for re-election in May, he always resisted calls to resign, even when they came from his allies.

Minutes before Murray was slated to unveil a new deal to renovate Key Arena, The Seattle Times reported on his fifth accuser: Murray’s cousin, Joe Dyer, 56, who claims the abuse took place in the '70s when the two of them lived together with Dyer’s mother, Murray’s first cousin, Maryellen Sottile, in Medford, New York. According to The Times, Sottile heard about the allegations from Dyer just months after Murray moved out. Dyer was 13 years old at the time.

Heckard filed a lawsuit against Murray last April, before dropping it because, he said, he needed to complete rehab.

Simpson and Anderson’s claims had exceeded the statute of limitations. An Oregon Child Protective Services report from the 1980s sided with Simpson when he first raised the allegations, saying Murray should “under no circumstances” continue to be a foster parent.

With each new revelation, Murray saw his support crumble. Both Seattle’s LGBTQ Commission and Human Rights Commission had called on Murray to step down. The local chapter of the Survivors Network of the Abused by Priests (SNAP) joined them. And the majority of candidates to replace him said unequivocally he should step down.

On Tuesday, Seattle City Councilmember Kshama Sawant issued a statement, saying she joined “the working people and community members of Seattle who are understandably relieved at Mayor Ed Murray’s resignation.”

Following the release of the CPC report in July, Sawant and Councilmember Lorena Gonzalez were the only councilmembers to call for Murray’s resignation. In an email to her colleagues following reports that Child Protective Services had believed accuser Jeff Simpson’s allegations from the 1980s, Gonzalez wrote, “This is no longer a he-said-he-said scenario.” If Murray was determined unfit to be a foster parent, Gonzalez argued in the email, obtained through a public records request, he should not be mayor.

On Tuesday, both Seattle mayoral candidates Jenny Durkan and Cary Moon, called for Murray to resign.

“Mayor Murray's response to the many allegations of sexual abuse have been deeply inappropriate and harmful, especially to survivors, LGBTQ people and young people everywhere,” said Moon. “Survivors of sexual assault must be believed and treated with respect.”

“It's clear that it is in everyone’s best interest for him to resign,” said Durkan. “As a parent, former public official and openly gay woman these allegations are beyond sad and tragic; no official is above the law. "

All along, Murray had maintained some small level of support. Before his resignation, former Mayor Wes Uhlman said Murray should remain in office to spare the city the turmoil of a mid-September transition to a mayor, followed by the installation of whoever wins the Nov. 7 primary election.

“We don’t need that kind of confusion to engulf the administration of the city for … three months or whatever it is,” Uhlman said.

There will certainly be some confusion: Murray was poised to release his annual budget in the coming weeks. And major items like the arena and the city’s re-bidding of its contracts for homeless services remain in flux.

Harrell is ideologically aligned with Murray and is among the most likely council members to simply govern as Murray would have. “I can just tell from personal experience that the administration of the city as mayor is quite different from being on the council,” said Uhlman, who served as finance director of Harrell’s 2013 campaign for mayor.

“Bruce is a smart guy.  It would take him a while to get up to date and then the time would be up.”

What happens after Harrell’s turn as mayor ends is murky. The city charter is not clear on whether Harrell would be able to return to his position on the City Council, the blog SCC Insight has reported. But a spokesperson from the Seattle City Council said Harrell would give up his seat if he chooses to accept the seventh floor office.

In a statement, Harrell gave no indication of whether or not he would become mayor for the remainder of the term. “I intend to make an announcement within the five days on my intentions and will talk to my family, my colleagues on the Seattle City Council, and trusted members of our city on this decision with the understanding that the City and continuity of governance comes before all other factors,” he said in a statement.

If Harrell does want to keep his council seat, it may make sense for Councilmember Tim Burgess to take the mayor's job: He's not seeking re-election.

Whoever does move upstairs will need to be replaced by the council. Councilmembers will accept applications and then vote on who should fill that role. That person will then serve until fall of 2018 when there will be a special election to determine who will permanently fill the seat.

Another wrinkle that comes with Murray's resignation: Whoever wins the November race for mayor — either Moon or Durkan — will now take office on Nov. 28, the day the election results are certified, as opposed to the standard Jan. 1. The winning candidate, therefore, has less than a month to prepare to assume their role.

Murray’s resignation marks a catastrophic end to what was largely considered a decorated career in the state Legislature and Seattle City Hall, marked by large wins on gay rights and transportation.

“I’m proud of all that I have accomplished over my 19 years in the Legislature, where I was able to pass what were at the time the largest transportation packages in state history, a landmark gay civil rights bill and a historic marriage equality bill,” said Murray, the city’s first openly gay mayor, in his resignation statement.

“And I am proud of what we have accomplished together at the City during my time as mayor, passing a nation-leading $15 minimum wage, and major progressive housing affordability and police accountability legislation, as well as negotiating an agreement to build a world-class arena that I believe in time will bring the NHL and NBA to Seattle.

“But it has also become clear to me that in light of the latest news reports it is best for the city if I step aside.

“To the people of this special city and to my dedicated staff, I am sorry for this painful situation.”