Durkan, Moon: Not so similar after all 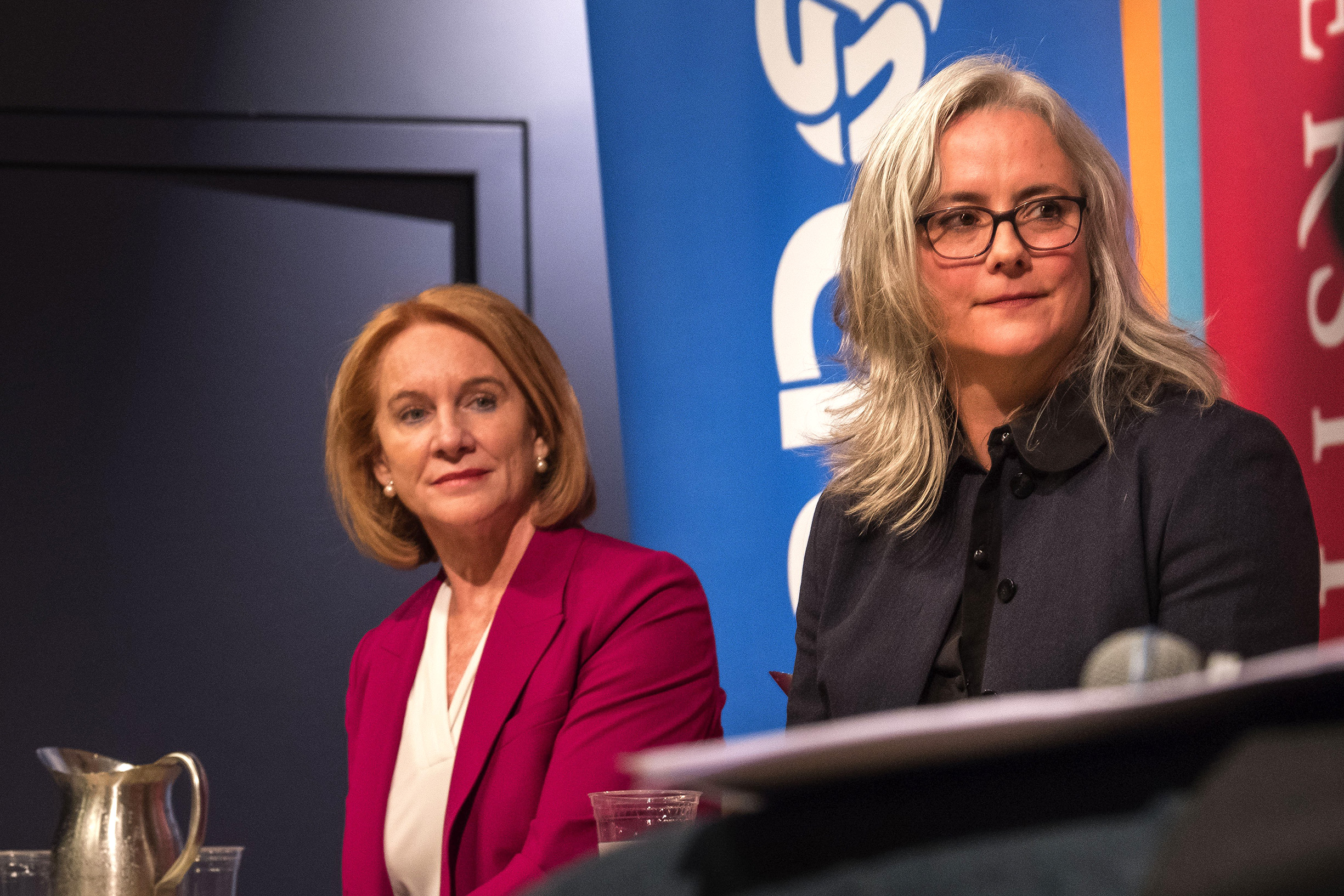 The two candidates for Mayor of Seattle, Jenny Durkan, left, and Cary Moon, debated Tuesday, September 12, 2017 at Pigott Auditorium on the campus of Seattle University.

The rapid-fire and wonky discussion in the much-anticipated first mayoral debate between Jenny Durkan and Cary Moon on Tuesday had been predicted to be the day’s biggest political event.

But it was not to be: Following new sexual abuse allegations, Mayor Ed Murray did what no Seattle mayor has done in nearly fifty years and quit, a dramatic fall from grace for the former state legislator.

Despite all wishes to keep Tuesday night’s debate focused on housing and homelessness, the weight of the day’s news hung over the event. And so at Seattle University, moderator Enrique Cerna of KCTS 9/Crosscut looked at both candidates and asked about Murray's decision to resign: Should he have done this earlier, when the first allegations came out?

Both Moon and Durkan agreed his decision Tuesday was the right one, although Moon was quick to point out that she’d called for his resignation months ago when he was first accused of sexual abuse of minors. “Using the bully pulpit of the mayor’s office to defend yourself and demean and victim-blame is an abuse of public trust,” she said.

Durkan, who’d accepted an endorsement from Murray during the primary, changed her tune after a fifth man, Murray's cousin, alleged abuse. She called on him to resign just hours before Murray announced he'd be stepping down.

The Crosscut/Seattle Times debate (watch it here), hosted by Seattle University's Project on Family Homelessness and Solid Ground, then returned to the topics that had been billed: Seattle’s housing and homelessness crises. Polling shows the two issues are, without question, the most dominant for voters in a city struggling to cope with its own success.

For an hour and a half, the two candidates sought to needle each other’s weaknesses, Moon calling out Durkan for her broad answers— sprinkled with turns-of-phrase and anecdotes in the style of a Presidential debate — and Durkan accusing Moon of offering unrealistic solutions to made-up problems.

For voters looking for substantial differences, there were some:

There is no disagreement between Moon and Durkan on the basic problems facing Seattle, however: They both say that the city is isn't affordable and there are too many people on the streets.

Despite her stance that “I’m my own woman,” Durkan has not substantively distanced herself from the ideological trajectory of Ed Murray. Like Murray, she believes deeply that unsanctioned encampments breed public safety hazards and should not be allowed to exist. When it comes to the mayor’s housing agenda, she strikes a tone that echoes Hillary Clinton’s appraisal of Obamacare: It’s a good start and we should build off of it.

On Tuesday, Durkan spoke of finding solutions that would suit everyone, although when it comes to proposals altogether different from Murray's, she did not offer specifics.

For “urbanist” Seattle — which would like to see Seattle’s vast swaths of single-family zoning reshaped (or eliminated) and specific plans for how the city will respond to growth — Durkan’s performance Tuesday is unlikely to satisfy. When asked about single-family zoning and approaches to adding density, she was vague, talking about growing “graciously” and avoiding “one-size-fits-all” approaches.

Moon was not vague, clearly attempting to separate herself from Murray's path. In fact, when given the opportunity to ask Durkan a question, she intentionally tied her to Murray, arguing that he had not done enough for communities of color and that she would be an extension of that.

She argued that Seattle’s single-family zones should be reduced to “somewhere between zero and less than we have now.”

Moon also advocated for adjusting local taxes on business and taxing large corporations more heavily. She also fell back to what has become her signature issues: taxing vacant properties or second homes where investors may be parking money.

Durkan was most successful when attacking Moon’s specifics: She argued that the proposal to tax corporations would have to go through Olympia. And she said a tax on investment properties would be a distraction amid other complicated issues and that there was no proof foreign investors were a major factor in the city’s housing market. "Look, I think whoever the next mayor is is going to have enough real crises and issues without making some up," she said.

With Murray's resignation, the winner of the Nov. 7 election will have a month less to prepare to take office: When replacing an interim mayor, the elected mayor takes office the moment the results are certified. That means either Moon or Durkan will be sworn in on Nov. 28.