Theater that brings millennials and baby boomers together 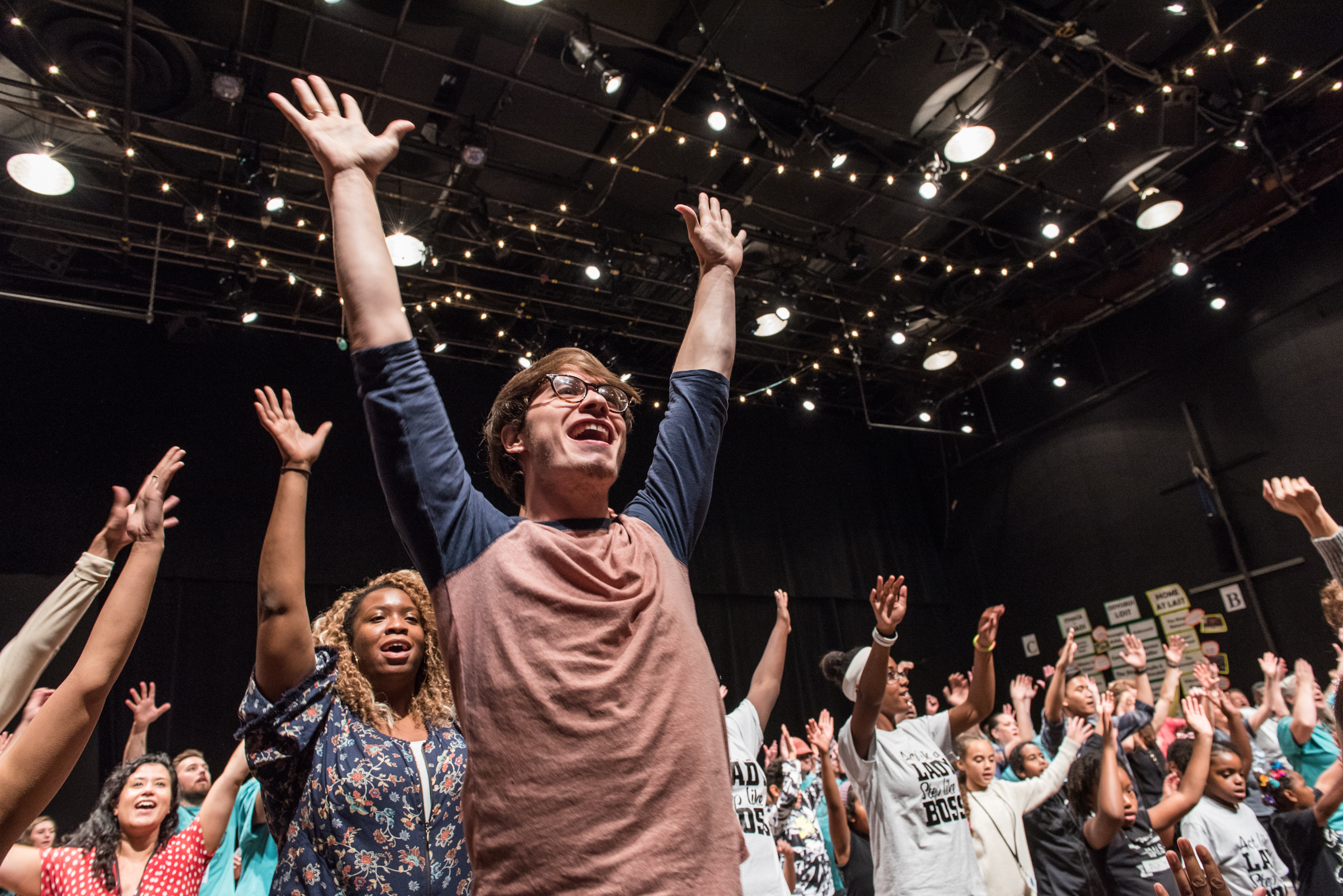 Guided by director Marya Sea Kaminski, they clearly had their synchronized moves down, having spent the last year acquiring the theatrical know-how to be among the 100-plus cast members for this latest Rep production. It will be one of the Rep’s most unusual, demanding undertakings: a musical-drama based on Homer’s ancient Greek saga “The Odyssey,” which will have four performances at the Bagley Wright, starting tonight. (Sept. 8 through 10.)

A sequel to Homer’s “The Iliad,” the epic poem “The Odyssey” depicts the nearly two-decade journey of Greek warrior Odysseus as he sails home from the historic Trojan War. It’s a long, thrilling trip, interrupted by dramatic encounters with a seductive nymph, an enraged one-eyed god and a sea monster. It's also one of the first works of literature ever set down in writing.

As the performers follow Kaminski’s cues with precision, they too are embarked on an odyssey. Joining a professional cast of four actors and nine local “cameo” performing arts groups (including a church chorale, a flamenco troupe and a Seahawks drumline), most of the 80 cast members at this rehearsal are theater neophytes.  What they lack in experience, however, they make up in commitment and palpable enthusiasm.

During a short break, Toni Myers, a bubbly retired librarian who got involved with the show through the Ballard NW Senior Center, beams with pleasure. “I’m having a blast!” she declares.

Twelve-year-old Saida Ali-Omar, who signed on via the Southwest Boys & Girls Club, is also relishing her stage debut. “I like the singing and the community coming together,” she says and with an anxious grin adds, “and I’m looking forward to my performance coming together.”

For Seattle Rep, it may be a game-changer. For the first time in its 54-year history, the Rep is devoting its high-caliber stagecraft and a hefty production budget (an estimated $600,000) to a theater piece featuring a vast cast of non-professionals — a show free to the public.

The Rep has spent several years forging close, mutually beneficial new relationships with nonprofit social service agencies whose constituents are part of “The Odyssey” ensemble.  In addition to the Ballad NW Senior Center and Southwest Boys & Girls Club, the nonprofits include Jubilee Center, a transitional housing program on Capitol Hill; Pioneer Square’s Path with Art, which provides art classes to people dealing with homelessness and addiction; and Centerstone, a Central District energy assistance provider and food bank. All serve clients who may have lacked the funds or the accessibility and familiarity to attend events at major local arts venues.

Enter the Rep, with a sprawling program of on-site theater classes and a chance to perform in the 800-seat Bagley Wright.  The project was championed by Braden Abraham soon after becoming the Rep’s acting artistic director in 2014.

When Abraham learned about New York Public Theater’s successful 2013 community rendition of “The Odyssey” that inaugurated its Public Works program,  he thought, “It seems like such a great model for us.”  A year later, after going east to see another Public Works show (a musical based on Shakespeare’s “The Winter Tale”), he decided to use the “Odyssey” script and musical score (both by playwright-composer Todd Almond) and institute the Rep’s own Public Works Seattle.

Abraham put Kaminski, then the newly-appointed associate artistic director, in charge of the project. She has spent several years organizing it “from the ground up.”

Kaminski stresses the two-way advantages of the undertaking. “The show is only part of a much longer program of us building relationships with different communities. The goal is to create a dialogue that leads to more access and representation of underserved populations in the audience and on the stage. That’s why we start every conversation, every rehearsal, with a statement of our values— equity, imagination and joy — and end with a shared meal.”

Though a departure for the Rep, Public Works Seattle is part of an emerging national trend.  Regional theaters across the country are searching for innovative ways to bring in new audiences and better mirror an increasingly diverse population.  Some companies are producing more “immersive theater,” which blurs the barriers between observer and artist through direct audience participation (as in the Rep’s recent hit musical set in a disco, “Here Lies Love”).   Another tactic is reaching out to train and recruit community actors from different sectors of the city, as in this project.

Not incidentally, key arts funders – government, corporate and private – are encouraging and rewarding such efforts. Seattle Department of Neighborhoods kicked in $100,000 toward “The Odyssey.”  Nordstrom, Microsoft and the Nesholm Family Foundation also pitched in with large grants. 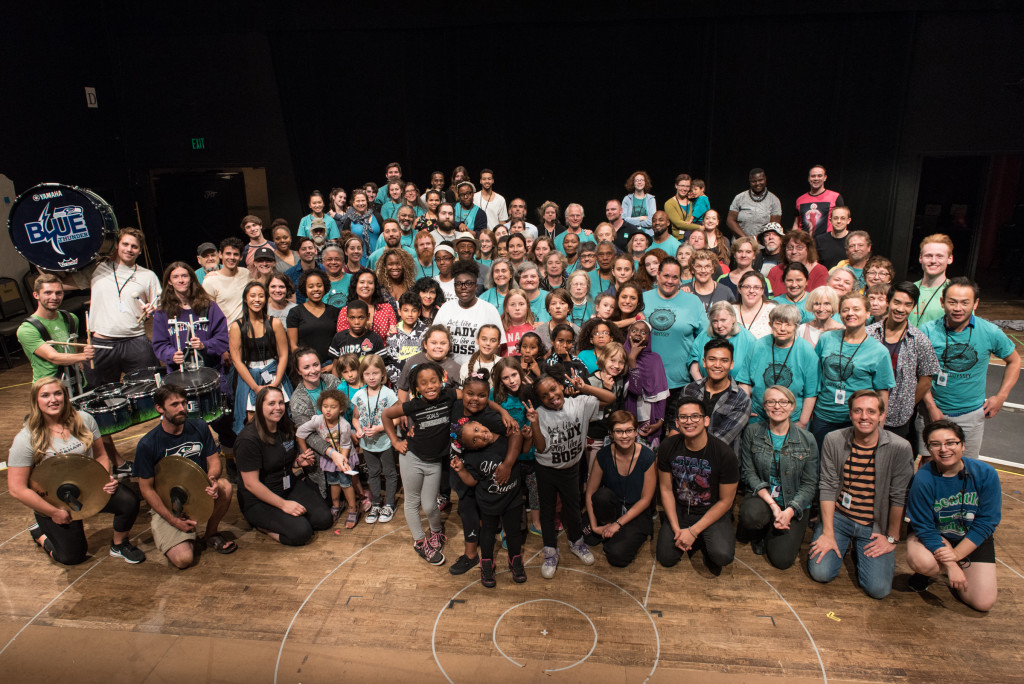 Eric T. Watkins, executive director of Southwest Boys & Girls Club, wasn’t sure if sports-oriented youths at his White Center clubhouse would be interested in the program. But he was happily surprised. “When the kids started realizing they could actually get up on the stage and act and sing, the program took off like wildfire.”

About 20 kids turned out for the classes. “They were going out of their own comfort zones and seeing their success through the reactions of adult mentors. They were coming out of their shells, and their self-esteem was building up big time,” he said.

One story that stands out: “One young man was afraid what his guy friends would think of him when he got into acting.  Now he says even if he’s not playing basketball with the guys, he’s finding success in what he likes doing.  And he’s going to draw in a couple friends to participate next time.”

Jubilee Women’s Center, the transitional housing program, also had eager takers. Anita Cech, the marketing and outreach director, says the Rep offered field trips to see some of its productions free of charge. “Going to the theater is very luxurious for the population we’re serving,” she pointed out. “The women who took the classes, or just went to the shows, had an amazing community experience. They’d have a dinner, see the performance, get a talkback with the staff and the actors.”

When it came time to audition for parts in “The Odyssey,” three Jubilee women tried out “and really embraced the opportunity,” said Cech. “They developed a lot of confidence, and were able to transfer that to other areas of their lives.”

The auditions were competitive but participants received coaching beforehand. Saida Ali Omar from White Center recited a poem and snagged the role of the goddess of Athena who “turns into a little girl and sings the song ‘Welcome Home’ when Ulysses comes back from his travels,” she explained.

For Cynthia Linet, a foodbank client at Centerstone, trying out wasn’t daunting.  It was a return to something she loved. “Long ago I studied acting in New York City, but life got in the way. At the Rep, I auditioned and got the role of Eurynome [a waiting woman for Ulysses’ wife Penelope], and it’s been so wonderful. I’ve met so many people I would never have otherwise, people from all different backgrounds.”

In New York, the Public Works production has turned into an annual event. Theaters in Detroit and Dallas have also launched their own community projects. 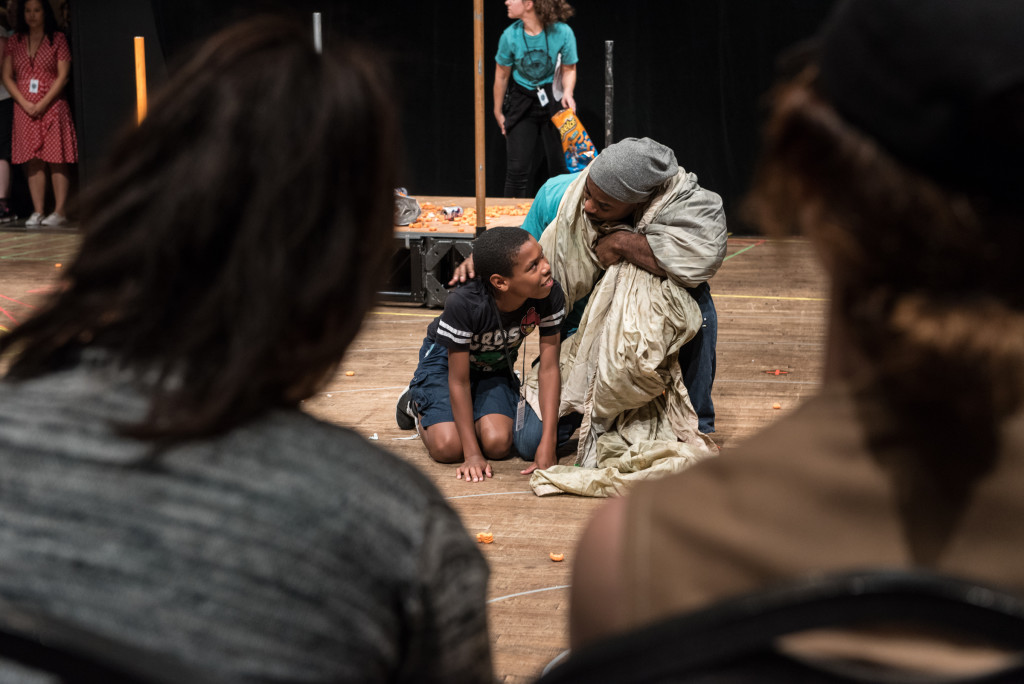 Abraham wants the Rep program to continue, and he’s already thinking about next year. But will such efforts supplant the company’s customary professionally-performed dramatic fare? And what about funding this as well as its regular programs?

“I think we can have both this kind of work, and our more traditional programming,” Abraham said. “What’s exciting for me is that this is a way to reach deeper into the Seattle community, while still making ambitious theater. I don’t think we’re compromising the art in any way.”

Saida, meanwhile, is eagerly preparing for her first opening night. Her parents are coming to production and other Somali relations will be driving in “all the way from Edmonds.”

“I’m acting like normal but I’m really scared,” she admits. “And I’m a little worried that when he sees me onstage my dad will yell out, ‘Saida! That’s my daughter!’”