On San Juan Island, saving the life of a rare butterfly 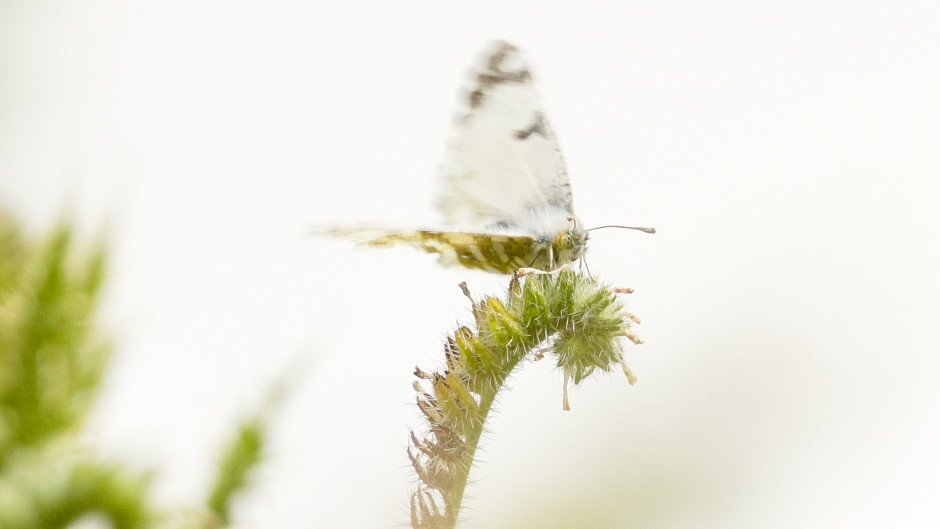 The island marble, considered one of the rarest butterflies in North America, only exists in a small section of the San Juan Island National Historical Park. Credit: Greg Davis

The southern tip of Puget Sound’s San Juan Island is a wildlife-viewing wonderland.

But come spring, Amy Lambert spends most of her waking hours here in search of a blurry, winged creature the size of a silver dollar, dashing in and out of the grasses for seconds at a time, going whichever direction the wind blows.

“It’s quite stunning, isn’t it?” she says, focusing her binoculars on the insect.

The island marble is considered one of the rarest butterflies in North America, only found in a small section of this island’s small national historic park.

Thought to be extinct for nearly a century, the island marble was rediscovered here in the late 1990s. Two decades later, Lambert and the San Juan Island National Historical Park are trying to save the insect from the dual threats of rising sea levels and a landscape crowded with wildlife and people.

“This is a last-resort moment, when you realize that in your lifetime — maybe even in the next year — you might not see that butterfly again,” Lambert said.

In the late 1990s, the white-winged insect was so rare that nobody had officially named or described it. The butterfly only existed in the form of brittle specimens collected on Vancouver and Gabriola islands in the early 20th century, leaving butterfly enthusiasts to assume the worst.

Some theorize that it arrived on San Juan by human transport, cocooned in a bale of hay. Others suggest that a strong gust of wind may have carried the butterfly to these shores. Washington State Department of Fish and Wildlife biologist Ann Potter, one of the first to rediscover the butterfly, thinks it may have been here all along.

“It was a landscape and geographic area that was under-surveyed,” Potter said.

For all intents and purposes, the area is now under surveillance. The discovery launched a multi-year effort by Potter and other state and federal researchers to map the insect’s whereabouts. Lambert became one of the first scientists to formally study it.

She counted about 300 butterflies in the American Camp section of the park, a string of grassy prairies and sand dunes. There were satellite populations too. Lambert documented the healthiest colony of butterflies on the island in low-lying lagoons along the park’s shorelines.

Then she returned to a lagoon for an annual survey in 2008; the butterfly had done what it was known for: disappeared.

“The numbers completely blanked out,” she said. “It was devastating.”

The previous two winters, surging tides had rushed over the beach, pummeling the butterfly’s delicate, native host plants with sand and gravel.

It was the kind of coastal flood that may become more common over the next century. Sea levels are expected to rise across the Pacific Northwest, changing shoreline habitat for animals like shellfish, waterfowl and even people. But for a small butterfly population confined to a small geographic area, any loss of habitat can make the species more vulnerable to extinction.

Declines continued in other parts of American Camp, and the National Park was forced to decide whether to save the butterfly.

They turned to a last-resort measure in conservation biology called captive rearing.

Park researchers collect butterfly eggs on the landscape and help raise them in a laboratory. Each egg will turn into a caterpillar, curl up in a cocoon, spend 11 months in a temperature-controlled closet, and — 90 percent of the time — emerge as a butterfly the following spring.

“Its guaranteeing the survival of the island marble,” said Park Superintendent Elexis Fredy. “The butterfly is on life support.”

They’re using the program to create a butterfly stronghold on higher ground. In 2017, park researchers released more than 100 butterflies on the upland prairie, where Lambert is planting mustard grasses that she hopes can provide a natural source of food and shelter for their offspring. With the low-lying native host plants threatened by rising sea levels, these mustard plants are their only hope.

The mustard grasses, which Lambert planted as seeds in the fall, must begin to bloom as the captive butterflies emerge from their cocoons around May. The butterflies roam the landscape in search of a suitable hosts for their eggs. If the buds on the plants are too big or too small, their caterpillars will starve.

“Nature has worked out the finer details of this process, but when you’re the one throwing seeds on the landscape and changing the temperature gauge in a captive rearing room, you realize how difficult it is,” Lambert said.

Lambert is tracking survival rates, searching for hundreds of little orange and white eggs in a sea of yellow flowers and returning daily to monitor whether the orange dots survive as slender, green caterpillars.

The surveys suggest the project is working:  The butterfly population has doubled to 200 butterflies observed on the landscape.

But questions remain about how it will become self-sustaining. The butterflies don’t just depend on the safety of the captive rearing lab, but also on a patchwork of plastic fencing that protects their host plants from foraging and trampling. Rabbits have eaten their way through large sections of the prairie, park visitation is increasing annually, and an ever-expanding deer population has been the biggest threat to the butterfly’s survival here.

Fredy worries the park is too crowded to be the butterfly’s sole sanctuary.

“You can’t fence off the whole prairie for one species,” Fredy said. “Everyone needs a piece of this place.”

The U.S. Fish and Wildlife Service could help tip the balance of favor toward the island marble. Last year the agency found the butterfly "warranted" for listing under the Endangered Species Act, which could open up more funding to expand its range.

“The more we can spread them out, the less vulnerable they’ll be,” Potter said.

Meanwhile, Lambert searches for signs of expansion — even in places long-considered hopeless.

Last spring, she returned to the lagoon in search of eggs, not seen here for 10 years. She found four nestled in the white buds of the native pepper grass.

She snipped three of them near their roots, and inserted them one by one into plastic vials to be taken back to the captive rearing lab. Their survival is almost guaranteed.

She examined the fourth egg, an orange dot centered in the bud of a tall stand of pepper grass, and walked away.

“Someday we won’t have to collect,” she said, surveying the beach that was washed out by saltwater 10 years earlier. “Someday the butterfly will just be here, without us.”