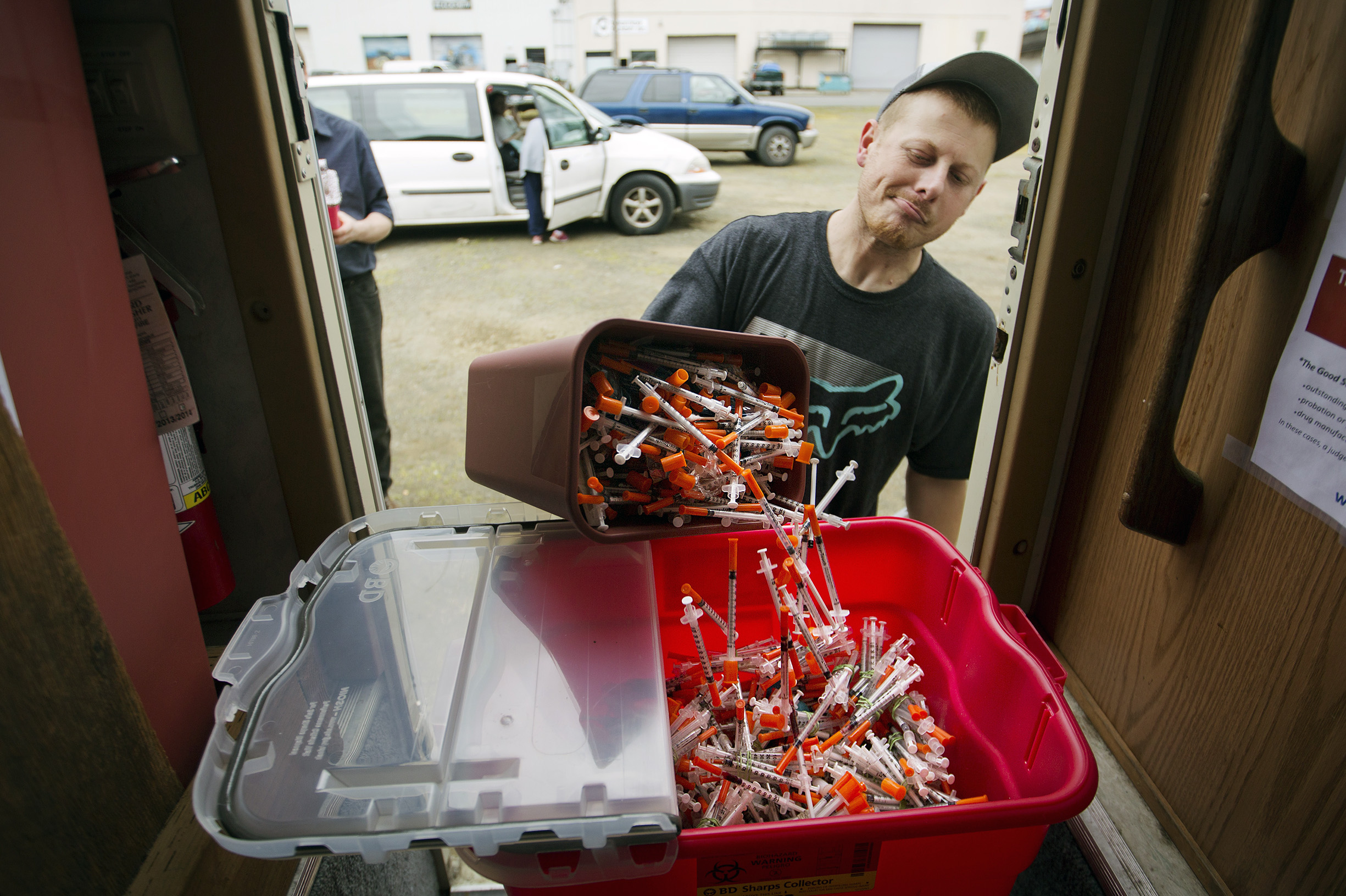 A man deposits old needles for new ones at a needle exchange program run by the Grays Harbor County Public Health and Social Services Department in Aberdeen, Wash., Wednesday June 14, 2017.

A little more than halfway through the year, Jin-Ah Kim had already lost count of the number of fatal overdoses that have claimed the lives of her friends.

“It never gets easier, you never get used to death,” said Kim, a recovering heroin addict, while she adjusted the medallion of Saint Michael dangling from her neck.

As the debate intensifies over a bold plan by King County to open the first safe drug consumption sites in the country, Kim is running for the Shoreline City Council in hopes of influencing drug policy. Kim thinks the proposed sites, known as Community Health Engagement Locations (CHEL), are part of the solution. “I’m going to help whoever I can, I think because I’ve seen myself go from being homeless, so now I will never, ever write off anybody,” Kim said.

Others are convinced that providing a place for using heroin or other opioids would only lead addicts to use more drugs, delaying or avoiding entirely the hard task of entering a healthier lifestyle. An initiative petition drive gathered plenty of signatures this summer to put a proposed ban on the supervised consumption sites to a countywide vote.

On Wednesday, a King County Council committee will take up the timing of the initiative vote and a proposal to put a temporary halt to any county work that would open a site before the vote.

The initiative vote is expected to be on a ballot in February, but the council could decide to put its own alternative measure to voters along with the initiative.

The idea of providing places where drugs can be consumed safely — without the risks of fatal overdoses going unnoticed — was one of several recommendations the King County Heroin and Prescription Opiate Addiction Task Force presented in September 2016 to combat the region’s growing heroin and opioid epidemic. According to a report released by the University of Washington’s Alcohol and Drug Abuse Institute, 332 people died from a drug overdose in 2016 — an all-time high for King County.

The plan approved by the county health board calls for opening two safe consumption sites for a pilot study, one in Seattle and the other somewhere else in the county.

While Kim’s opponent in the council race, incumbent Shoreline City Councilmember Keith A. McGlashan, has questions about the sites — and that's mild compared to the fierce opposition of elected officials in many cities, with the exception of Seattle.

Feeling pressure from outlying cities, the King County Council passed an ordinance prohibiting the opening of a safe consumption site without a city’s explicit approval. Despite this action, five cities have gone one step further: Bellevue, Auburn, Federal Way, Renton and Kent banned safe consumption sites in their jurisdictions. Four of these votes were unanimous.

King County Councilmember Jeanne Kohl-Welles, a supporter of safe injection sites, says the plan now is to go forward only in Seattle, and that nothing could happen there before the initiative vote occurs. Suggestions that authorities might hurry one into operation before the vote misunderstand the lengthy process that would be require to obtain approvals, she said.

The aim is to save lives, and there has never been a fatal overdose in a supervised consumption site, Kohl-Welles said. "Get people into the system," she said. "Get them help so that they can lead drug-free lives."

One of the most outspoken opponents of safe consumptions sites, Republican state Sen. Mark Miloscia, R-Federal Way, proposed a bill to ban the sites statewide. After his legislation fell short in Olympia earlier this year, he began encouraging city councils to pass their own bans.

“Once you move to this sort of model you basically decriminalize — legalize — drug use,” he told Crosscut. “This move to complete toleration of drug use will not get the hardcore drug user to change their behavior.”

If a safe consumption site opened in Federal Way, for instance, Miloscia predicted hundreds of drug users and dealers would congregate around the facility, crime would greatly increase and drug deaths would rapidly rise. He says the existing research has been done hastily — shortly after facilities have opened — and that researchers may have wanted to see success.

Another opponent, King County Councilmember Kathy Lambert focuses more on the health of the users themselves. She said that until addicts accept treatment, they are likely to develop ever more health problems. "I would rather treat someone as quickly as possible," she said last week.

Caleb Banta-Green, a professor and drug-abuse researcher at the University of Washington and King County task force member, believes the sites are needed, and the project should extend beyond Seattle. Nearly 100 safe consumption sites are already in operation around the world, and, like needle exchanges, studies have found these sites save lives and increase participation in treatment.

“Clearly information and facts and evidence are not what is driving this discussion,” Banta-Green said.

The whole point of the CHEL sites is to predict where addicts are going to go, and put our already-scarce resources in a concentrated area with maximum exposure, Kim said.

Her opponent, City Councilmember McGlashan, isn’t so sure. “I don’t know that it’s been proven that it’s the answer,” McGlashan said about safe consumption sites. “I need more information.”

He pointed to a methadone clinic in Shoreline, saying it “tends to be problematic” and “takes a lot of our police resources.”

“I haven't found a resident that’s supportive of these sites,” McGlashan said.

Banta-Green said having a site outside Seattle is important. “We need to put services where they are needed and there are overdoses everywhere,” he said. “I can’t think of a mid-size city that doesn’t have a need — Bothell, Kirkland, Bellevue, Issaquah, Renton, Auburn, Federal Way, Des Moines.”

He said residents don’t always understand the purpose of safe consumption sites, not themselves having “made the turn mentally that [treatment] resources would be available at these sites.”

“If you talk to 10 heroin users, at least eight of them are going to say ‘I don’t want to use, can you help me get on treatment medications today,’” Banta-Green said.

He said, “It’s not just about creating treatment capacity, it’s connecting people to care, in part by reaching out to where they are.”

To Kim and some experts, the argument over safe consumptions sites mirrors the debate that took place nearly three decades ago as cities began discussing the efficacy of needle exchanges to stem the spread of HIV and hepatitis C. “The needle exchange is the only reason I don’t have HIV or hep C, or anything,” she said.

Citing an academic research paper, Forbes recently reported that activists in an unnamed city have quietly operated an unsanctioned safe consumption site since 2014.

Nyrop said, “Our strong preference is for sanctioned aboveground sites.” But he said it might take activists opening up supervised consumption sites without legal authorization to get the practice started in this country, a pattern that Forbes said has occurred in several nations.

Lambert said that the council should assure citizens that the county won't do anything toward opening a safe drug consumption site until after the vote. She expressed hope that she will be able to introduce language at the Wednesday meeting that the entire council can agree to, although she acknowledged that she was having trouble finding a compromise.

The council also has the power to simply adopt the initiative as it's written, heading off the need for a vote by the public. That's regarded as unlikely, since the council as a whole has supported spending to prepare for the safe consumption sites.

While the county council gets ready to put the initiative before voters, a group of supporters of the county plan, calling themselves Protect Public Health, have gone to court to try to block a vote. In a statement, the group says that “public health policy is not subject to veto by citizen initiative,” and the passage of I-27 would set a dangerous precedent.

“It’s incredible that we treat medical issues as something that is up for a public vote,” Banta-Green said. “That’s not how you do public health.”