How Murray's resignation impacts the next mayor 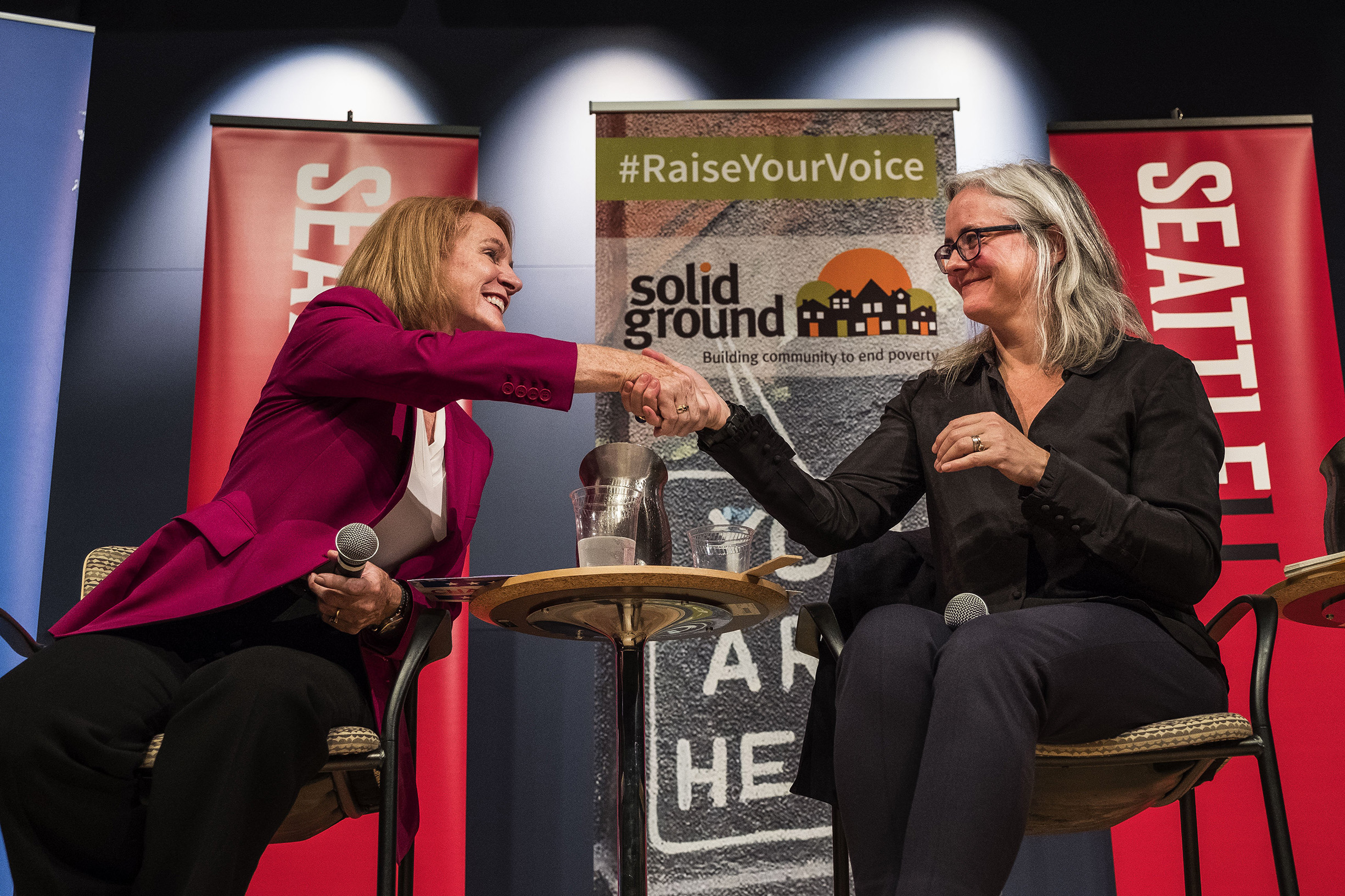 The two candidates for Mayor of Seattle, Jenny Durkan and Cary Moon, congratulate each other on their efforts following the event, Tuesday, September 12, 2017 at Pigott Auditorium on the campus of Seattle University.

First will come the emails. The moment either Cary Moon or Jenny Durkan is crowned mayor-elect in November, they will arrive by the hundreds, even thousands. They’ll come from constituents, lobbyists, nearby mayors, far away mayors, far away congress people, donors, labor groups, business leaders, caterers, media, campaign staff, outgoing city staff, career city staff. And, others.

Phones will ring, too. Text messages will pour in. People will stop by to say hello. They will not wait for the swearing in; competing interests tend to quickly turn away from the sitting mayor to start relationships with the new executive, says former Mayor Mike McGinn, who both unseated an incumbent and was unseated himself.

“There will be a bunch of people who will say, ‘This mayor will listen to me in a way that the last mayor didn’t,’” says McGinn. “‘I’ve got to get to her before my opponents.’”

As the mayor-elect moves from her campaign offices into a Seattle Municipal Tower office (she'll have a small budget for a small staff), responding to all incoming messages will be a full-time job, maybe more. “It’s the sort of thing that will just be a flood,” said one person who helped with Mayor Ed Murray’s transition. It’s important to answer quickly to form first impressions and build a reputation.

This answering will be only one piece of a very complicated task that is transitioning into the mayor’s office, a transition that will be even more challenging because of a shortened timeline. Following Murray's sudden resignation that led to an interim mayor, the swearing in of either Durkan or Moon will be November 28 — not January 1. Thanksgiving and Christmas for Seattle's mayor might not be so relaxing.

Durkan or Moon will be responsible for a $5 billion plus budget, the governance of some 12,000 employees and decisions about a whole host of Murray projects he'd hope to see through in a second term. Some projects are well-publicized, like the Pathways Home plan responding to homelessness, the arena deal, negotiations with the police unions. Others are deeper in the weeds, like a partially completed consolidation of the city’s IT departments, a proposed consolidation of Human Resources, the rollout of a new software system to track permitting, and more.

Each of the city's 39 departments will offer briefing books for the new mayor that outline priorities, problems and questions. “There will be 20, 30, 50 of those things that people just want an answer on,” says McGinn.

And everyone will argue their needs should take priority. “It’s hard to determine what’s really important and what’s less important,” said the former member of Murray’s transition team, who is still a city employee and who asked not to be identified. “Because people are working very hard on issues that are really important to them.”

The pace will be intense; the hiring of staff will be critical, McGinn notes. There is no set structure to the mayor’s office. Durkan or Moon could decide to hire fewer people at higher salaries or fill out the office with more people at lower salaries. The new mayor might want several deputy mayors and a chief of staff or she could decide to flatten the hierarchy or do something different altogether. When Murray took office, he inaugurated a mayoral sub-office, the Office of Policy and Innovation, which had not before existed.

When mayoral staffers are hired, they will need training on the city's ethics, whistleblower and public disclosure laws. Wondered the former transition team member: With a shortened timeline, will the new employees fully understand that everything they write is now a public document?

There are some things working in Durkan or Moon's favor. For one, Murray announced months ago that he was not seeking re-election, so city department heads have had planning time to prepare briefing books. According to a city spokesperson, these efforts have already begun.

The flip side, however, is that department heads have also had months to consider changing jobs. There could be vacancies to fill quickly even if the new mayor wasn't planning on cleaning house. McGinn ran into this when he took office; his predecessor Greg Nickels lost in the primary and several department heads had already accepted new jobs by the time McGinn moved into a 7th floor office.

Both Durkan and Moon's campaigns confirm they’ve had preliminary contact with current city employees to prepare.

“Since the primary, Cary Moon has been meeting with professionals, former and current city staff, as well as stakeholders, to formulate her transition plan,” a campaign spokesperson said in an email. “She's closely following the budget process, though that might be nearly done by the end of November. Her transition team will be focused on ensuring seamless delivery of city services, clear and transparent decision making, and formulating a detailed vision and agenda for her administration.”

A consultant to Durkan's campaign, Sandeep Kaushik, who is also a former member of Murray’s transition team, said he had a short conversation with Fred Podesta, who directs the city's Department of Finance and Administrative Services and is tasked with overseeing the mayoral transition. Kaushik pointed out that Durkan is not thinking about the transition; “there’s no capacity,” he said. “What I would say is, Jenny is focused right now on the campaign and on winning in November. That is the 24/7 focus both of her and the campaign. If the voters honor her by electing her mayor in November, she’ll focus on the transition at that point.”

In an effort to help smooth this atypical transition, triggered by Murray's resignation and the quick appointment of Bruce Harrell as mayor, Harrell signed an executive order that creates a team of city representatives to oversee the impending change. The order directs the team to contact both Durkan and Moon's campaigns to "provide information, gather input and address any questions."

Those questions will include understanding the budget. The city council is scheduled to pass the city budget on Nov. 20; the Mayor's Office has ten days to decide whether to approve it.

That means it'll be up to the interim mayor to decide whether to take action — or leave it for Durkan or Mayor to decide, putting one of them in the unusual position of signing off on a budget they didn't create.  And, it might also be a budget they can't even change; the city council passed the last two budgets with a veto-proof 8-1 vote, a pattern that is likely to repeat this year.

But regardless, amid everything else in the transition, if Moon or Durkan is handed the pen and asked to sign, they're going to want to know what it is, exactly, they're inheriting.