The rise and dramatic fall of Seattle's mayor 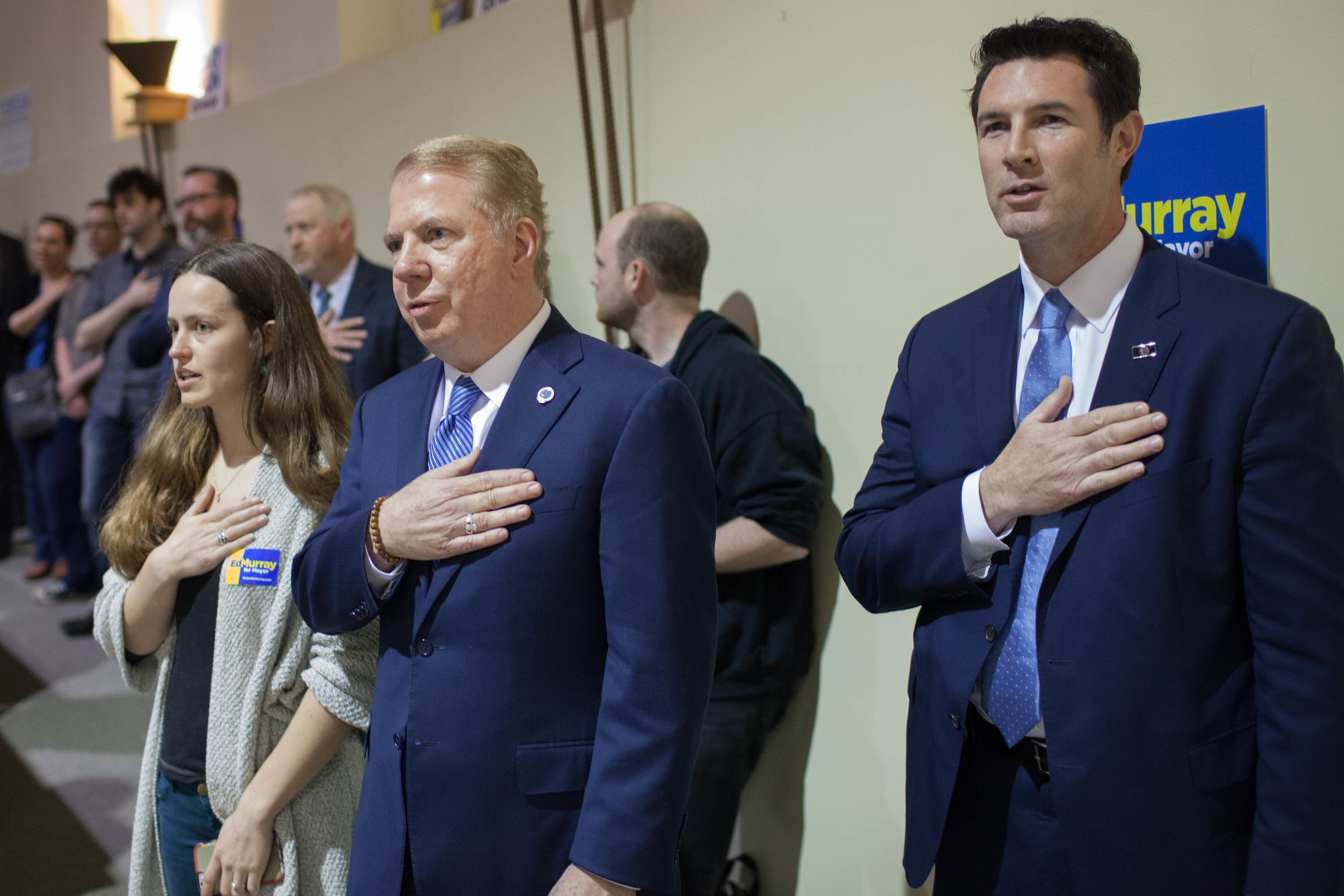 Mayor Ed Murray, center, recites the pledge of allegiance at the start of the Mayoral Candidate's Forum at Seattle Mennonite Church in Lake City neighborhood on Thursday, April 20, 2017.

Where there’s smoke there’s fire, as Seattleites learned this summer when a yellow haze engulfed the city.

That was mirrored in the haze that has wafted around City Hall since child sexual abuse allegations against Mayor Ed Murray surfaced earlier this year. The smoke got even thicker when a relative, a younger cousin, came forward saying he too had been abused by Murray in the 1970s.

While Murray continued to insist there was no fire, the allegations of five accusers look to be a large blaze. The politics of the situation, at the very least, became untenable. Murray had previously agreed not to run for re-election; now he has announced he is resigning ASAP.

The smoke — and perhaps flames — will tarnish the legacy of a man who in many respects was a model mayor and progressive politician. In the legislature, he was a force for gay rights and marriage equality. When he was elected, he was proud to be the first openly gay married mayor in the country. He said he wanted Seattle to be a role model for progressive government.

When he took office in January of 2014, he hit the ground running. He had one of the best first years in memory for a Seattle mayor. He ran with the minimum wage and got activists and business together to enshrine the $15-dollars-an-hour into city law. He made police reform a top priority and advanced it. He managed big projects well, like tapping the brakes on the waterfront redevelopment so that bumbling Bertha could catch up.

He seemed to embody the strongman-type mayor many Seattleites have yearned for — he used his office to drive agendas, whether the HALA housing plan or raising the level of urgency on homelessness. He wasn’t at constant war with the City Council. He yanked the reins of control on the neighborhood councils to show who was boss.

It often takes a mayor time to get moving. Former Mayor Norm Rice once joked that it took a while for Charles Royer to get the hang of the job and it finally happened, in this third term. But Murray — savvy, deft, determined, willing to make deals — came out of the gates strong.

If Murray is determined and tough he also came with an edge, a sometimes brittle one. His temper became a subject in a town used to “Seattle nice.”

I experienced his wrath when I edited Seattle Weekly and we ran a story that he interpreted as suggesting he got a make-work contract from the Port of Seattle. Yelling into the phone, he demanded to know how we could impugn his integrity.

Nothing seems to infuriate Murray more than someone questioning his core social justice values. This goes to the heart of his politics and his faith.

I remember shortly after his election in 2013, I ran into Murray at a holiday party. He walked up to me and announced out of the blue that of the last three mayors, all Catholic, only he attended mass regularly. He looked like he wanted me to pin a gold star on him for being holier than Greg Nickels or Mike McGinn. It is not enough for Murray to do good, but he wants to be seen as good.

People forgave him his political stumbles. A year ago the political class consensus was he was a shoo-in for re-election, not an easy achievement for an incumbent mayor. But that was before allegations about the past came to haunt him and radically alter public perception. Now, with the testimony of a family member that cannot be ignored or dismissed or moved to the bottom of the mayoral in-box, riding the scandal to the end of his term became untenable.

Murray is doing the right thing by resigning.  Stepping down now will help clear the air for the public’s business. We have two good candidates to replace him.

The mayor deserves his day in court, but as evidence against him mounts so too does the scale of the unprecedented private and civic tragedy unfolding in Seattle. Let’s hope, somehow, it leads to healing.