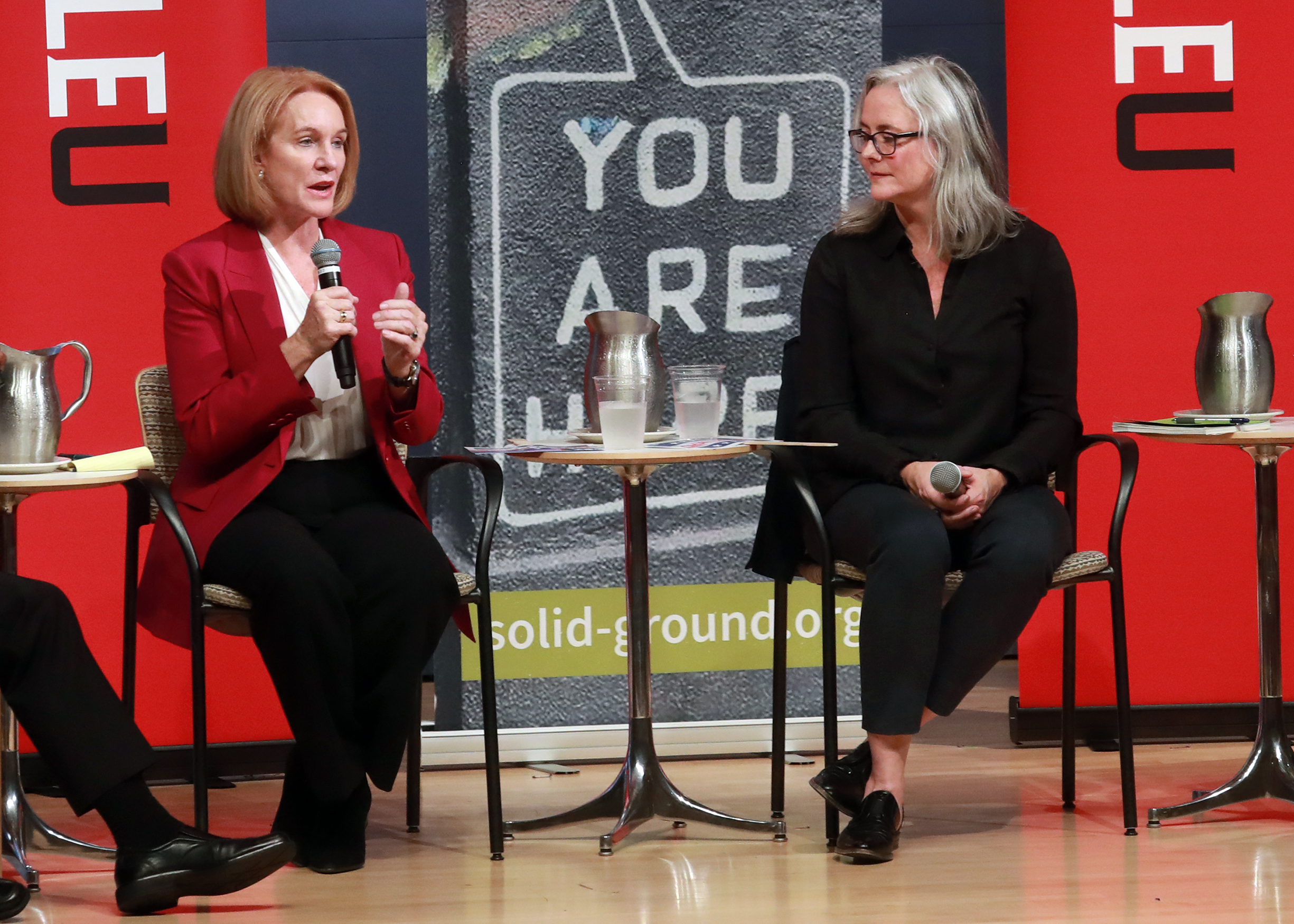 In a neighborhood expensive even by Seattle standards, mayoral candidate Jenny Durkan’s partner, Dana Garvey, is building a house. When it’s finished, the couple will have the opportunity to move out of their rented downtown condo and into the three-bedroom, five-bathroom residence. It will be well over 5,000 square feet with an 800-plus square foot garage and a hot tub with a cabana.

After purchasing the property in 2015 for more than $4 million, Garvey quickly demolished the house that was there and began construction on a new one. The current valuation is now more than $7.5 million, according to property records.

Durkan's campaign finance disclosure form does not include the value of the house under construction in her own personal wealth because it is owned by Garvey. The couple is not married; Durkan is therefore not required to disclose Garvey's financial assets. The couple has been together since the '90s and have two teenaged children.

No other city has seen housing prices rise as quickly and dramatically as Seattle's, leaving thousands of poorer residents behind. People considered low-income now spend more than half their paychecks on rent, according to a Zillow study, and nearly half of Seattle renters spend more than a third, the de facto watermark for an overly-burdensome rent. By one report's estimate, to afford a one-bedroom apartment, a person earning minimum wage would need to work 87-hours a week.

Even as Seattle has enjoyed a boom in high-paying jobs, homelessness has continued to climb and once working class and low-income neighborhoods have been gutted.

Amid this crisis of inequality, the two candidates for mayor, Durkan and Cary Moon, are routinely characterized as white, rich women. Each is well-aware that their wealth may not necessarily be a selling point for their candidacy at a time when residents are being squeezed out of the city's tech boom, and both pledge they are working to build the trust they need.

But can those bearing the brunt of the housing crisis trust that a candidate on the winning side of the inequality gap will best represent their needs?

"If I were a voter I’d be asking that same question, " Durkan says.

When Durkan filed the financial disclosure forms required of candidates for office, she listed her personal wealth as $5.75 million. Had she stayed employed at Seattle law firm Quinn, Emmanuel, Urquhart and Sullivan, her net worth would have likely increased; Durkan confirmed in a recent interview that her yearly salary was due to climb to upwards of $2 million.

Durkan declined to specify her partner's net worth, but allowed that, combined, she and Garvey were doing quite well. Garvey worked for McCaw Cellular before it was sold to AT&T and also ran her own, successful business, setting up local cell towers. In the early 2000s, Garvey bought Whidbey Island’s most expensive property for $3.4 million and last May, the couple sold their previous home for $4.3 million after Garvey had already purchased the new property.

(At Durkan's request, Crosscut is withholding naming the neighborhood where the new property is located as well as certain details that may identify its location. As a former U.S. Attorney, Durkan has received death threats; those threats, she explained, have exempted her from listing on her financial disclosure form the address of a downtown condo that she and Garvey rent while their new house is under construction.)

Moon lists her assets at $4.1 million, including a condo near Pike Place Market with views of Puget Sound and the Olympic mountains. The condo is valued at $1.8 million according to Zillow.

For most of the 2000s, Moon worked as an advocate for transit-friendly infrastructure, most notably as a co-founder of the People’s Waterfront Coalition. She also worked as an urban planner under the business name Landscape Agents, which is really just Moon.

A large portion of her wealth comes from Moon's family business in Michigan — Pro-Tech Respirators — which manufactured respirators for factory workers. The business benefitted in the '70s as OSHA cracked down on air-quality and asbestos concerns and in a resume posted online, her brother Michael Moon boasted the business grew by 325 percent while under his watch. SEC documents show the business was consistently profitable.

Moon helped run the operation with her father from 1991 to 1994 before he sold it in 1995 to Bacou USA, a French manufacturing company. Moon told Crosscut she believed the sale to be for around $10 million. The SEC documents from the time say it was $6.8 million; Moon spokesperson Heather Weiner said the SEC number does not include the more than $3 million that went to the 100 or so employees who worked for her father. Many of those workers were laid off by Bacou shortly after the purchase, despite what Moon says were promises to the contrary.

After both of her parents died, the remaining money was divided between Moon and her six brothers and sisters, giving her about $1 million in 2014.

Combined with the salary of her husband — Mark Reddington, who is a partner at LMN Architects — Moon has self-financed the majority of her campaign, contributing $111,521 of the $201,422 she’s raised over the course of her campaign. Like Durkan, she also has two teenage children.

A candidate's wealth brings numerous advantages to a political race. For one, neither Durkan nor Moon has needed to work during the campaign, which Durkan points out is in contrast to some of the challengers both candidates faced in the primary election.

“I think you could see, even in this election for mayor, how many times would we be starting a forum and either Bob Hasegawa would be late because he was coming from Olympia because he was trying to discharge his duties or Nikkita (Oliver) would be coming in late because she’s trying to get from her job,” said Durkan. “...It’s incredibly important to be able to get to have taken time off from my job to do this full-time. It gives me an advantage.”

In the primary, Moon allows that she was able to get the word out about her campaign without a significant number of volunteers because she relied on her own financial contributions.“With 21 candidates and the fairly short amount of time, it’s pretty hard to build a grassroots volunteer network,” she said.

“Nikkita and the Peoples Party were brilliantly successful at that. They worked so hard to achieve that," she said. In the primary, Moon narrowly beat Oliver, the candidate who campaigned the loudest on issues of racial justice and economic equity. Moon says she understands why some voters may balk at her win. “I’m sure they were very frustrated at the injustice of the different track I was able to take. So I own that inequity. I see it and we all need to fix it.”

Beyond campaigning is, of course, governing. As her mayoral candidacy was coming to an end, Oliver delivered a harsh assessment that Seattle — struggling with homelessness and faced with workers who can't afford to live here — would be choosing between two rich candidates for mayor. “The two candidates in the general election are two wealthy white women..." said Oliver, pointing out how some of her campaign rhetoric about social justice was increasingly being echoed by both Durkan and Moon in later stages of the primary. But those issues, Oliver maintained, were embraced by her campaign because they were personal. "It’s important that those ideas that the party and myself brought to this election are birthed out of our lived experiences. Those are not lived experiences those two candidates share."

Moon, who would need to pick up a large portion of Oliver’s voters in order to defeat Durkan, says she’s prioritizing her campaign around proving herself as someone attentive to issues of race and class. “I’m reaching out to communities in the south-end as the highest priority of where I spend my time in this campaign,” she said. “Because I know I need to build trust and I know I need to establish accountability to these folks.”

Durkan too says she’s listening and will continue to listen. She said she grew up modestly in once-rural Issaquah, in a big family, which meant they all had to work hard to make their way. She says her actions are what qualify her to represent Seattle's poor and working class, pointing to her work in a public defender’s office, in prisons, living in an Alaskan Native community and working on behalf of people she describes as having been “wronged by the system.” “I know I don’t live their lives,” she said. “But I’ve sat with and listened to people to know that they are really suffering. For them, living in a city is literally a matter of survival. It is not about 'Will I have enough money for some luxury or some nice item?' It is about 'Will I have enough money to pay rent, to buy food, to support my kids?”

“All I can tell them is, 'I will listen, I will feel with you and I will never quit listening.'”