Movers and shakers in the field of mortality share a spirit of innovation at Death Salon. 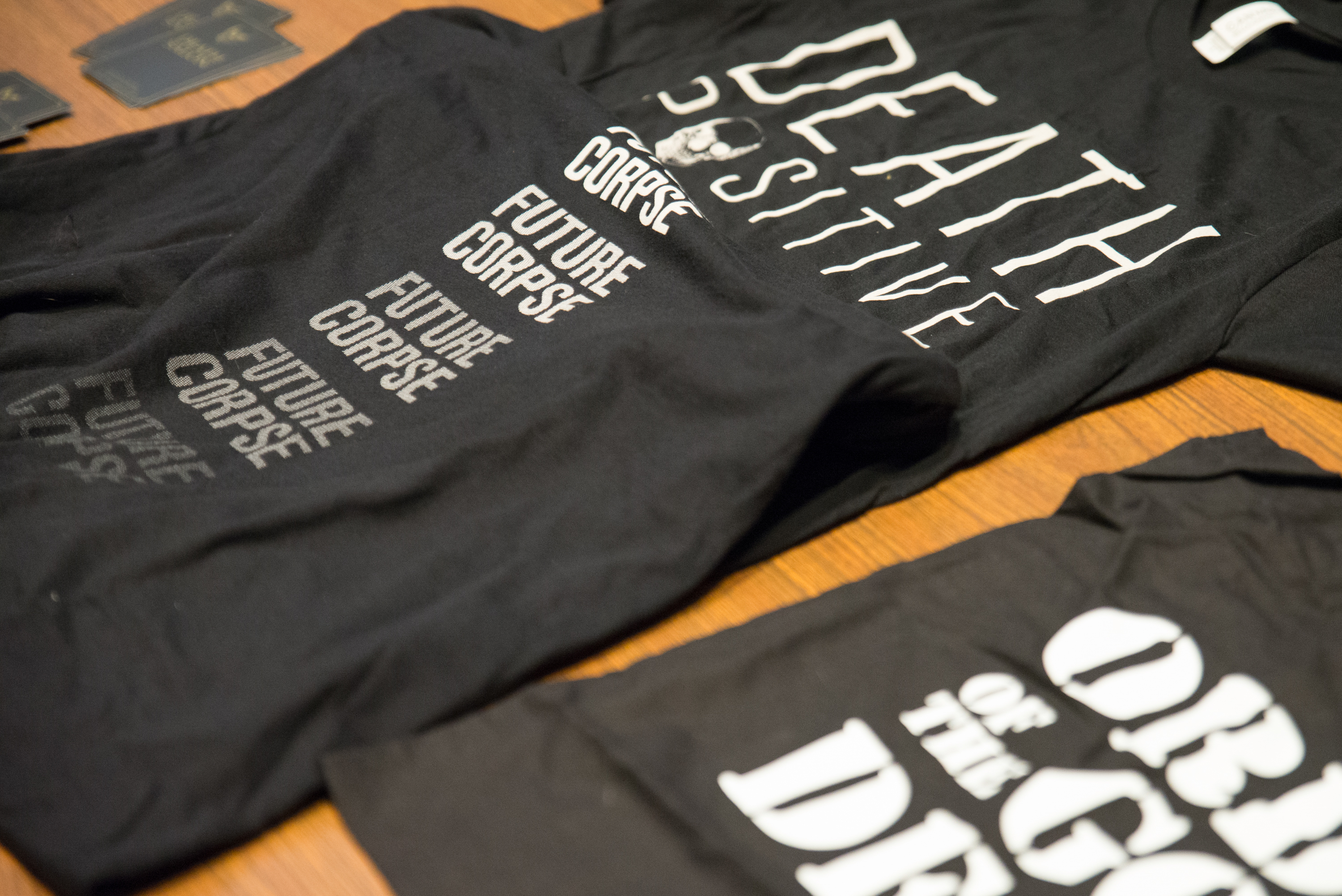 A few of the T-shirts on sale at the Death Salon in Seattle.

“We’re about to enter 36 hours of death talk — please drink a lot of water.” So advised Caitlin Doughty, thoroughly modern mortician and founder of The Order of the Good Death, as she kicked off the seventh annual “Death Salon” in Seattle in early September. But as the 20-plus speakers at this mortality-forward conference confirmed, even the most hydrated among us can’t elude death.

Doughty, who runs an “alternative funeral home” in Los Angeles, launched The Order of the Good Death online in 2011, with the goal of building a movement of people who believe that the American death industry — funerals, crematories, cemeteries, mortuary schools — needs disrupting. The first step is the toughest: openly addressing the fear and denial around our own mortality.

Cultural anthropologist Ernest Becker explored this topic famously in his Pulitzer Prize-winning book, "The Denial of Death," and the Mercer Island-based Ernest Becker Foundation co-sponsored the Death Salon. These events (“sort of our Comicon,” Doughty joked) are a way of starting those conversations and instigating change.

This year marked the first time the event was held in Seattle, which Doughty called “one of the most death-positive cities in America.” That’s a compliment. Emblazoned on black T-shirts for sale in the lobby, “death positive” is a founding principle of The Order, reflecting the fact that, as one presenter put it, “Talking about death is not going to kill you.”

Energized and eager to dig in, the 275 people gathered at University of Washington’s Kane Hall represented all walks of death: palliative care workers, hospice volunteers, writers on the “alternative death beat,” funeral home staff, grief counselors and morticians. One woman worked at Public Health-Seattle & King County in “mass fatality planning,” another had traveled from Minnesota, hailing from the Mayo Clinic’s Office of Decedent Affairs.

Reflecting current trends in death care, the crowd was almost entirely women. (And a remarkable number sported Bettie Page hairstyles — an alt-death fashion statement that Doughty acknowledged with self-deprecating humor when she pointed at the sea of hands during a Q&A and said, “You, with the bangs.”) Wearing shirts that said, “It’s Okay to Decay” and “Future Corpse,” participants were keen to discuss issues pertinent to the increasingly female field, such as the worrisome fact that when women start to outnumber men in a profession, pay for those jobs tends to decrease, and the imperative to bring more women of color into the fold.

During breaks, people split into discussion groups on topics from cemetery law to home funerals to the latest far-out concepts in body “disposition.” Over boxed lunches of roasted veggie focaccia sandwiches and quinoa chickpea salads, participants debated the pros and cons of mushroom suits (in which fungi assist in body decomposition), biodegradable urns that “grow a tree” from a loved one’s ashes and a human-sized egg-shaped burial pod (said one skeptic, “Do you know how hard it is to get a corpse into the fetal position?”).

Another hot topic: Tibetan sky burials, in which a loved one’s dead body is left on a rocky mountaintop so vultures can pick the bones clean. “It’s the natural life cycle!” a fan exclaimed. “How would you start something like that in the U.S. — would you open your own buzzard farm?” another asked. After a pause, someone responded, “That would take a pretty big culture change.”

Some shifts in American death culture are more feasible than others, to be sure. But Seattle presenters were focused on achievable goals — though even these will take some major adjustments.

Chanel Reynolds founded GetYourSh**Together.com (later changed to GYST.com for the profanity-averse), after losing her husband to a bike accident. The website helps people prepare for the administrative demands of death, including financial, medical and legal documents. In her talk, Reynolds strongly recommended having death directive discussions before finding yourself in an emergency room, and urged people to clearly define “quality of life.”

“I tell people to consider Terry Schiavo, 'The Diving Bell and the Butterfly,' and Christopher Reeve,” Reynolds said. “Which of those scenarios would you be OK with? People have very different opinions.”

On the Death with Dignity (DWD) panel, End of Life Washington executive director Sally McLaughlin discussed the continuing misconceptions and lack of awareness about the state's DWD law, which went into effect in 2009. She requested retirement of the phrase “assisted suicide,” deeming it inappropriate.

“These people are not committing suicide,” she explains. “They are already dying. They would certainly choose to live if it were possible.”

She and DWD-WA activist Nancy Niedzielski also encouraged everyone to ask their primary care doctors if they support DWD. “And ask the follow-up question,” said Niedzielski: “Would you prescribe me the medication if I asked?”

Seattleites are known for asking big questions when it comes to death. Artist and entrepreneur Greg Lundgren wondered why cremation urns were so uniformly lackluster (or outright ugly), so for more than a decade he has worked to create beautiful, customized vessels — true works of art — that reflect the spirit of the deceased.

In 2012, culinary innovator Michael Hebb was puzzled by the statistic that while 75 percent of people would prefer to die at home (versus a hospital), only 25 percent do so. He started the campaign “Let’s Have Dinner and Talk About Death” to instigate community meals centered on this difficult but essential topic: How do we want to die?

Members of Seattle’s alternative death care industry wish people had such conversations long before needing their services. At the conference, Brian Flowers, founder of The Meadow Natural Burial Ground in Bellingham, the first green cemetery (no embalming, no caskets) in the state, lamented the current disconnection from death. “So many people say, ‘I don’t care what happens to my body, I’ll be dead,’ ” he said. “My mission is to move people to ‘I care deeply about what happens to my body.’ ”

Nora Menkin, from The People’s Memorial alternative funeral home in Seattle, said that families who haven’t talked about death often default to traditional modes (embalming, caskets, formal visitation) that end up feeling empty or inappropriate. “The traditions have been made traditional by the corporations who want to sell them to you,” she noted. Both Menkin and her colleague Jeff Jorgenson from Elemental Cremation and Burial are hoping to amend the strict licensing rules that make it nearly impossible to start a progressive funeral home, and to expand death-care options in the state.

One legislative push in 2018 will be to make “aquamation” (or alkaline hydrolysis) available in Washington. The process — legal in 14 other states — uses a bath of hot water and potassium hydroxide to dissolve the body, leaving only bones. It’s considered a better environmental choice than cremation (which Seattleites choose at a rate of more than 90 percent over burial) because it emits fewer toxins and uses far less energy. And aquamation is already legal for Washington’s pets, as at Resting Waters in West Seattle, where owner Joslin Roth said her customers consider it a gentler option than cremation by fire.

Advocating perhaps the most radical take on body disposition was Seattle architect Katrina Spade, founder of the Urban Death Project, the “human composting” initiative that made headlines when launched in 2015. Since then, Spade has continued to test her idea, and will embark on a pilot program with Washington State University’s soil science department this year.

While she’s changed her language from “human composting” (“so 2016,” she said) to the less alarming “recomposition,” Spade’s goal is still to create a beautiful, urban gathering space where family can enact personal death rituals and return their dearly departed directly into the earth, allowing microbes and bacteria to transform them into pure soil. Her biggest remaining hurdle is legal, but she was optimistic, saying, “I believe deeply that this is what people will want if we can make it available.”

Earlier, Doughty had told Death Salon attendees that it was Spade’s 40th birthday, which she had chosen to spend in conversation with strangers about funerary matters. On cue at Kane Hall, the group gathered in happy song to celebrate the birth of a death-positive pioneer.

Death Salon co-founder Caitlin Doughty will be back in Seattle reading from her new book, "From Here to Eternity: Traveling the World to Find the Good Death," on Oct. 6 at The Summit on Pike.