A painted diary of the Japanese incarceration 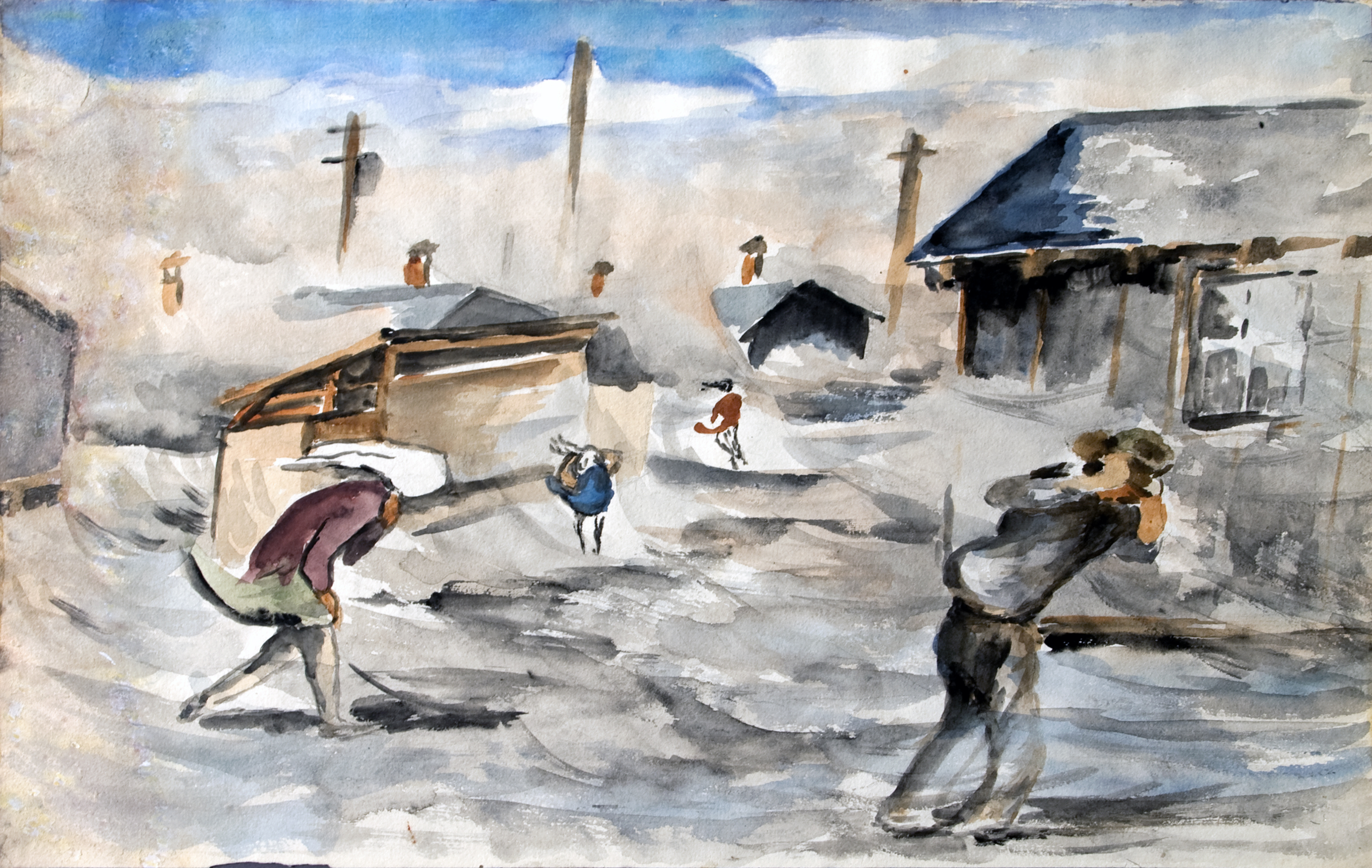 Takuichi Fujii, Minidoka, “This area’s famous
phenomenon of the sandstorm can make even
the day dark. It is really something,” (not
dated). Watercolor on paper, 10½ × 14½
inches. Collection of Sandy and Terry Kita.

In 1906 Takuichi Fujii left Japan. He boarded a ship in Kobe and three weeks later landed in Seattle, a raw young town a half-century old. He started a business and a family.  He was an Issei, a first-generation Japanese immigrant hoping to make America his new home.

Fujii worked every spare moment on his art, meeting with and learning from his fellow immigrant artists. He was asked by director Richard Fuller to mount a solo exhibition by the Seattle Art Museum, a singular honor for any artist, though Fujii’s move to Chicago for a couple of years in the late 1930s put those plans on hold.

Then Fujii came back to Seattle and ran headlong into history.

Fujii, his wife and two daughters were swept up by Executive Order 9066. Issued after the attack on Pearl Harbor, it directed that all West Coast residents of Japanese descent be sent to incarceration camps for the duration of the war. The Fujiis were sent first to temporary barracks at the Puyallup state fairgrounds, then a permanent camp in Minidoka, Idaho. Fifty years old when he was uprooted, Fujii lost almost everything — his livelihood, his home, any sense of privacy, continuity or hope for a better future.

But not his art.

Fujii drew and painted throughout the three and a half years of his incarceration, and his work is featured in “The Hope of Another Spring: Takuichi Fujii, Artist and Wartime Witness,” a new book by Barbara Johns (University of Washington Press, 334 pp., $39.95).  The book is a beautiful display of Fujii’s work, and it’s proof of the power of art and artists to witness events many would rather leave in the dark. Roger Daniels, noted historian of the incarceration, calls Fujii’s work “the most detailed and informative work produced by an Issei prisoner in a War Relocation Authority Camp.” And it’s a testament to the efforts of many people to ensure that he has not been forgotten.

Johns, a noted Seattle-based art historian, was working on her dissertation at the University of Washington, focusing on immigrant-generation artists in 1930s Seattle,  when she first came across Fujii.  She chose three artists — Kenjiro Nomura, Kamekichi Tokita and Fujii — to write about in depth. They were all painters in the American realist vein, often painting side by side on field trips to points in Seattle or eastern Washington.  All three were incarcerated, but Nomura and Tokita came back to Seattle. Fujii, on the other hand, “seemed to disappear,” she remembers.

Then, in a sequence of serendipitous events, Johns connected with Fujii’s family.  Terry Kita, wife of Fujii’s grandson Sandy Kita, saw a notice of a federal grant awarded to Seattle’s Wing Luke Museum to restore one of Fujii’s paintings, which led them to Johns. They had extraordinary news for her —  Sandy Kita, an art historian and scholar, was finishing a translation of his grandfather’s diary, which the artist kept during the entire incarceration. Fujii, who had moved back to Chicago after the war, died in 1964, but his wife lived into the 1990s, and his wife and his daughter (Sandy’s mother) kept his art collection intact, in boxes. Sandy and Terry Kita discovered the work when his mother moved from her home into an apartment.

Photographs in the camps were mostly banned, but drawings and paintings were permitted. Fujii’s visual diary documented the stark environment, the enforced inactivity, the lack of privacy, the endurance of cold and heat in substandard housing — at Minidoka, temperatures could range from 40 below to above 100 degrees. It chronicled the erosion of family life as the younger people — the Nisei, who were born in America — were encouraged to leave the camps, either to work or join the military. He painted the multiplying graves of residents who died there.

The drawings powerfully conveyed an atmosphere of threat and despair. Though the government used euphemistic labels like “colonist” to describe the internees, one drawing of the door to Fujii’s barracks with the lock on the outside showed the arrangement for what it was — a prison.  Fujii’s words were spare; as a first-generation immigrant — an Issei — Fujii grew up in a Japanese tradition of emotional restraint. But the powerful, somber images told the story.  At 50, Fujii had no way of knowing whether he would survive the camps, or whether he would ever see his daughters, who left for marriage or work, again.

Fujii never came back to Seattle. The diary, drawings, paintings and sculpture, about 250 pieces in all, might have never have seen the light except for the persistence of the Kitas. Now a selection of his works will be shown at an exhibit at the Washington State History Museum to mark the 75th anniversary of Executive Order 9066.  Johns will give a talk at 2 p.m. Sept. 16 at the museum, and will be accompanied by  Sandy Kita, Fujii’s grandson.

Johns values the artistic merit of Fujii’s work, but more than that, she admires his determination to bear witness to a terrible time. “I think the persistence and resilience he showed was incredible,” she says.

“I’ve been an art historian for a long time,” said Johns, “and sometimes I wondered if there was other work I should be doing. I feel honored to have been entrusted with these stories. ”

Author Barbara Johns will also discuss her book at 7 p.m. Sept. 13 at the Seattle Public Library’s Central Library Branch and at 7 p.m. Sept. 21 at the University Book Store in Tacoma.

The Washington State History Museum in Tacoma will present an exhibition of Takuichi Fujii’s work in the exhibit “Witness to Wartime:  The Painted Diaries of Takuichi Fujii”, running from Sept. 16 to Jan. 1, 2018.

Mary Ann Gwinn is a Pulitzer Prize-winning journalist who writes about books and authors for The Seattle Times, Booklist, Newsday and other publications. She was one of three jurors for the 2017 Pulitzer Prize in fiction. She serves on the board of the National Book Critics Circle.