Seattle performance artist and poet Storme Webber uses family photos, archival records and poetry to take visitors through a personal history of the Casino, one of the oldest gay bars on the West Coast, which used to sit at South Washington Street and Second Avenue South.  By many accounts, the show challenges our notions about what we think about when we think about Seattle history. As someone who has lived in the city for 20-plus years, I keep thinking, yeah, I know this place. Until someone smart like Webber presents work that says, Oh really? Well, take a look at this.  Note: Webber will be in conversation with curator Miranda Belarde-Lewis at the museum on Sept. 14 from 7 to 8 p.m.

For two weeks every year, the Seattle Design Festival brings together everyone — from artists to city officials — to learn about, think about and praise design, in its myriad forms. The theme of this year’s festival is POWER, asking who has the power? Who must we empower? How do the powerful and powerless work together? What power does design have to drive positive social change? Check out the full schedule for this year’s many offerings. Join a discussion about the history and future of design at the Capitol Hill Library. Regulars like the Seattle Architecture Foundation return to give neighborhood walking tours, such as the Greatest Hits Tour: Chart-Toppers and Heart Stoppers. Saturday's 16th annual Letterpress Wayzgoose will have over a dozen local letterpress printers and a studio tour that includes print-your-own keepsakes.

If you go: Seattle Design Festival, all around town, through Sept. 22 (Free)—N.C.

Heather Booth says that to be an organizer, “you have to love people and hate injustice,” and for her entire life, she’s been living this while creating a model for aspiring organizers. The new documentary serves as a history of progressive activism by showing the many people and causes Booth’s work has touched over the years, while empowering us all to maximize our power and energy in our democracy. Very excitingly, Booth will be at the Q&A following this event. 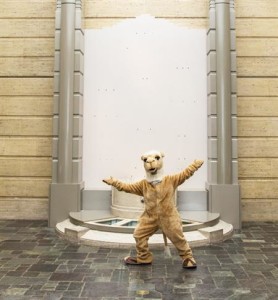 Off the Walls: Community Days

As it waits for its remodel, the Asian Art Museum refuses to let its vacant self stay quiet. The building hosts an all-ages event featuring live art installations by Romson Bustillo, Kalina Chung, Minh Nguyen, and Junko Yamamoto; art making booths; performances by CHIKIRI & The School of TAIKO, Mak Fai Washington Kung Fu Club Lion Dance Team and Massive Monkees Studio: The Beacon. And, photo opps with a mascot named Sammy the Camel. (The art museum has its own mascot? Who knew?!)

If, like me, you find yourself captivated by the simplest Rube Goldberg machine, your mind will be blown by “The Greatest Show (and Tell) on Earth,” the Seattle Mini Maker Faire. Now in its sixth year, the faire bills itself as a platform for over 130 “tech enthusiasts, crafters, homesteaders, scientists, garage tinkerers and commercial makers of all ages and backgrounds” to share their projects and products. Mathematically generated knitwear? They’ve got it. Homemade honey bee hydro stations? Check. A marble orchestra? But, of course. Full-size R2D2 builders club? Duh! Head to MoPOP for a celebration of passion, inventiveness and wonder unlike any other. And, of course, witness a genius in his own right at MoPOP’s current Jim Henson exhibit.