Sea Shanties aboard the Lady Washington

While I’m a frequent attendee (and highly recommend) the Northwest Seaport’s monthly shanty sing, this event takes singing sea shanties to a whole new level. On this adventure, Seattle Obscura Society takes guests out to sea on Lady Washington, the Gray’s Harbor Historical Seaport’s 1989 replica of an 18th century ship. The ship itself is noteworthy as it appeared in the Pirates of the Caribbean: Curse of the Black Pearl and Star Trek: Generations. You will board the ship, get to help the crew with setting the sails and then settle in for an evening of sightseeing and enjoying sea shanties led by local musician Michael Owcharuk and “all sea creature-themed, pld-time music spectacular” The Mermen.

A few years ago, I did a mezcal flight at local restaurant Mezcaleria de Oaxaca and my views were forever changed on the spirit I’d previously thought of as “like tequila but really smoky.” My eyes were opened to not only the nuanced flavors of mezcal, but the rich history and culture surrounding its preparation. The 5th Annual Northwest Tequila and Agave Spirits Festival aims to do just this: connect people to the work and centuries-old traditions that go into crafting tequila and other agave spirits. What better way to foster this connection than through taste? With over 150 spirits at the festival, try a variety of samples (from mainstays like Don Julio to newcomers like Northwest-based Papa Bueno), learn about where it comes from and take home a few bottles of your favorites as a memento. In addition, enjoy nibbles from local restaurants and cocktails, beer and water. Don’t forget the water.

While Town Hall may be undergoing renovations this season, don’t despair — they’ll still be carrying on their unrivaled programming, but around the city! For this lecture, head to Capitol Hill’s gathering space The Summit to hear The Nation’s Washington correspondent John Nichols on the Horsemen of the Trumpocalypse. I was lucky enough to see fellow Wisconsinite Nichols here a few years ago, reading from his book Uprising: How Wisconsin Renewed the Politics of Protest from Madison to Wall Street. His humor, warmth, and great perspective from his decades-long experience as an on-the-ground journalist will make this night (about Trump’s inner circle) inspiring and hopeful. 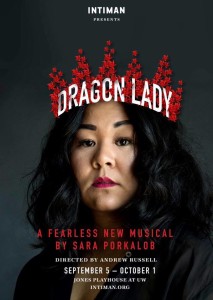 I still think about a version of this show, which I caught last year at Cafe Nordo: the undeniably talented actor-performer Sara Porkalob mesmerizing audiences with a story about her Filipina grandmother, gangsters, sex and family. Did I mention it's a one-person show? And, it's a musical?! The announcement that Porkalob was tapped to be co-curator of this year's Intiman Festival generated lots of local theatrical buzz; the announcement that Dragon Lady would be fleshed out into a fuller production — still a one-person show with Porkalob portraying three generations of her family  — immediately put the show on everyone's Must See lists. A twist on the usual immigration tale set to original songs that only someone as dynamic as Porkalob can pull off. It will be good.

The inaugural festival showcases Mexico through arts, culture, food and business. Events include a day of cross-cultural talks about arts, Mexican women and Americans who have made an impact in Mexico; a multi-course meal by Mexican Celebrity Chef Marco Marin of Latitud 32; a contemporary photography exhibit from Chiapas; a free performance by the Ballard Civic Orchestra, which is helmed by Paula Nava Madrigal; and an art show by local Mexican artists, which includes the incomparable Alfredo Arreguin. And in case you're feeling the insanity and need some additional creative relief: the socially-conscious, bi-cultural band Las Cafeteras will also be in town. If you haven't heard their song, "If I Was President," do yourself a favor and listen to it now; then, go see them live Sept. 13.