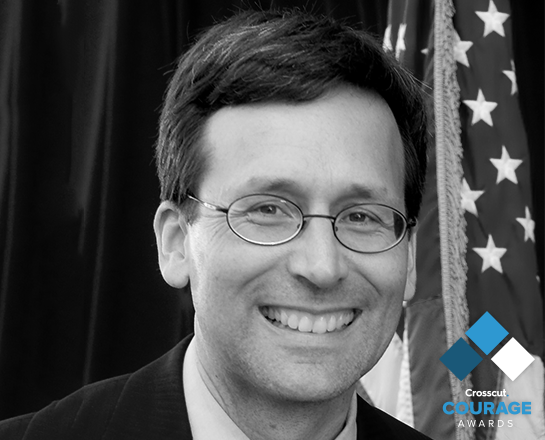 Bob Ferguson is the winner of the Crosscut Courage Award for Elected Office.

Last winter, when President Donald Trump issued an executive order attempting to prevent travel to the United States from seven majority-Muslim nations, Washington state Attorney General Bob Ferguson sued, eventually winning an injunction on the most controversial elements of the proposed law. Overnight, the little-known attorney general with deep roots in Washington state became a standard bearer of the “resistance.”

Ferguson is the winner of Crosscut’s 2017 Courage Award for Elected Office. He and five other winners will be honored on Oct. 12 at the Crosscut Courage Awards Breakfast, featuring a keynote address from Rolling Stone contributor Matt Taibbi. Tickets and tables are available here.

When Trump issued the travel ban, it “really pissed me off,” Ferguson says now. But he wasn’t surprised. His office had taken scrupulous note of the candidate’s campaign rhetoric, and they were holding weekly meetings to discuss the new administration, anticipating — correctly, it turns out — some kind of constitutional controversy.

Last week, Ferguson did it again, joining 14 other states and the District of Columbia in another lawsuit against Trump, this time challenging his repeal of an Obama-era immigration program that provides legal status to almost a million immigrants who arrived here as children.

The legal challenges have enraged Trump, who took to Twitter after a Seattle judge blocked enforcement of his original travel ban: “The opinion of this so-called judge, which essentially takes law-enforcement away from our country, is ridiculous and will be overturned!”

That, of course, hasn’t happened. “We are a country based on the rule of law,” Ferguson said when he announced the lawsuit. Last week, he added: “And in a courtroom it is not the loudest voice that prevails. It’s the Constitution.”

In many respects, standing up to the president was a natural development in Ferguson’s life. The 52-year-old has been going head-to-head with powerful opponents for a long time.

When he was 18, Ferguson sat focused and hunched over a chessboard in a giant West Berlin tournament hall, facing the Hungarian Gyozo Forintos, one of only 120 chess grandmasters in the world at the time. Hours before sunrise, Ferguson held the Hungarian to an excruciating draw, in the process tapping a well of newfound confidence.

“If I could handle ten hours being tested by this grandmaster in the middle of the night,” he says, “I could probably handle other challenges.”

Ferguson would eventually abandon professional chess for college, and later law school. The nephew of a Catholic priest, Ferguson worked with the Jesuit volunteer corps after college, managing an emergency social services program in Portland, and later spent a formative summer near Phoenix advocating for the Yaqui Indians and inmates on death row.

His exposure to communities struggling at the margins helped round out and solidify his longstanding concern for social justice. “Not everybody starts on a level playing field,” he says.

Ferguson made his public debut in 2003, winning a race against a 20-year incumbent Democrat on the King County Council. He secured his current position in 2012 and established himself as a fierce, tactful lawman who views the machinery of justice in deeply moral terms.

Among a handful of high-profile cases, Ferguson has filed lawsuits against Navient Corp. (formerly Sallie Mae) over predatory lending practices; the owner of a small flower shop in Richland, Washington for refusing to serve a gay couple; and Barack Obama’s administration for the sluggish clean-up of the Hanford nuclear site.

Trial is set to begin soon in a case involving the owner and operator of a mobile home park in Mattawa, Washington. Ferguson says the suit, which centers on an alleged scam perpetrated by the landlord against the immigrant farmworkers who live there, holds in its balance the principle of defending society’s powerless against the powerful. “It’s important,” he says.

But the attorney general's tenure has not been without criticism. Last month, Ferguson received backlash from tribes in Western Washington for his decision to appeal a court order requiring the state to replace a sprawling system of damaged culverts. In a 2001 lawsuit backed by the U.S. Department of Justice, 21 tribes sued the state over the metal and concrete tunnels that, in some cases, are too narrow or steep to allow for the passage of salmon. The tribes say this denies them their treaty-reserved right to fish, which they contend includes the right to make a moderate living from fishing. The nation’s high court should decide this fall whether to hear the appeal.

On the question political observers love to ask about Ferguson  — will he run for governor? — he is declining to say for the time being. But given his recent moments in the national spotlight, and the possibility of more consequential clashes with Trump to come, it’s not difficult to imagine Ferguson taking a run at the state’s highest office. For now, though, he appears intently devoted to his role defending the Constitution, and the people of Washington, against the most powerful opponent in the world.

Editor’s note: Profiles of the other Courage Award Winners will appear in the coming weeks. Meanwhile, you can register below for the Crosscut Courage Awards Breakfast on Oct. 12.

The Courage Award for Elected Office is sponsored by the RealNetworks Foundation.