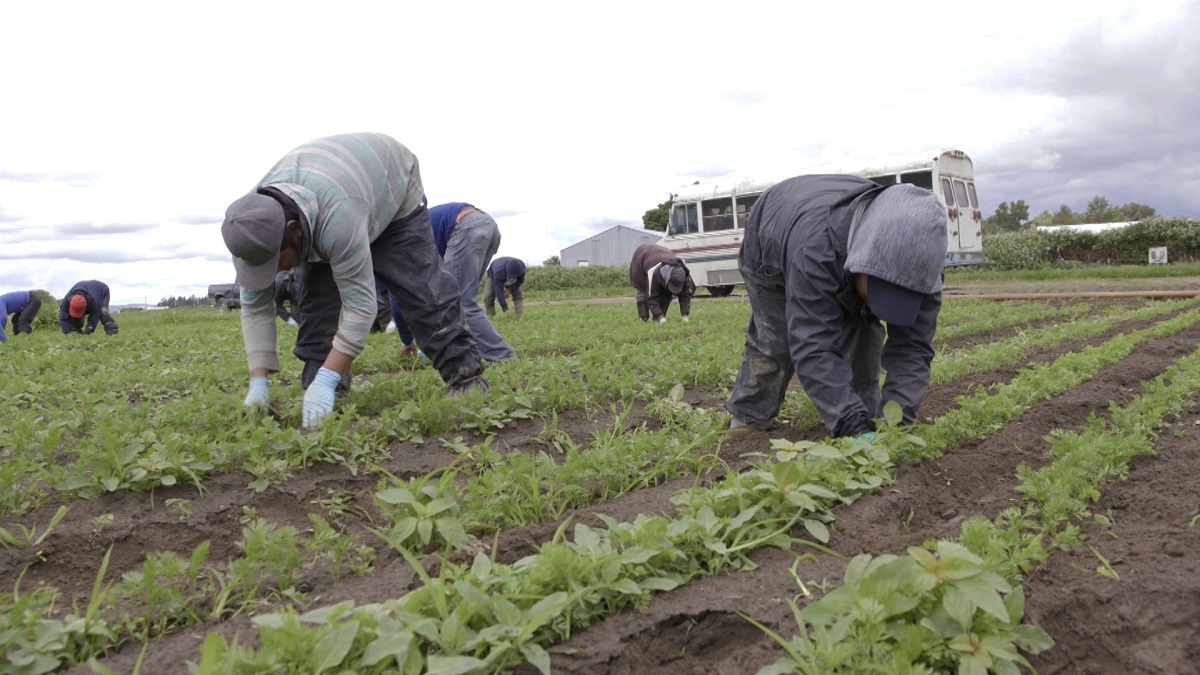 SKAGIT VALLEY, Wash. — The squeaky crunch of fresh kale leaves being picked breaks the early morning silence at Ralph’s Greenhouse vegetable farm, about 3 miles southwest of Mt. Vernon. A team of 14 workers has just arrived in an old converted school bus, exchanging morning pleasantries in Spanish and several indigenous Mexican languages as they begin the day’s work. Within less than an hour, the acre-sized patch has been harvested, weeded and prepared for new growth.

Ray De Vries, longtime owner of the farm (and son of Ralph) says that he is continually amazed by the speed and expertise of these workers.

“Contrary to popular belief, farming is a skilled trade, no different than an electrician or a plumber,” says De Vries. “These farm workers make farms work. ... We wouldn’t be able to get done what we need to without them.”

According to the most recent Washington State Farmworker Survey, almost half of the farm workers in the Skagit Valley are migrants from Mexico. They play a major role in the region’s $300 million agricultural industry, as experienced field workers, irrigation specialists, seed experts and mechanics.

But they also face increased threats under new leadership at the federal level — threats that have forced farmers like De Vries to get creative.

Under the more aggressive immigration enforcement policies enacted by the Trump administration, migrant farmworkers with no criminal records are being arrested twice as often as last year, according to U.S. Immigration and Customs Enforcement (ICE). It has only exacerbated a shortage of skilled farm labor in the Valley.

“What we have is a highly skilled labor force and no good way to get them here,” De Vries says. “To me, these random changes in policy don’t make sense.”

An immigrant himself, having moved to the United States from the Netherlands as a child, De Vries has tried using the government’s only legal temporary and seasonal worker immigration program, known as the H2A Visa. The heavily regulated system nearly bankrupted him.

“You’re supposed to estimate so many months ahead of time how many workers you’ll need, then you have to pay for their transportation and you’ve got to house them while they’re here. It’s expensive,” says De Vries.

But weather and fluctuating demand can quickly change a farmer’s labor needs, leaving him or her with workers to house and feed but a crop that’s not ready to harvest.

De Vries says he keeps required records on all of his employees and has complied with more frequent ICE check-ins and audits. But he knows the Valley’s agricultural system could not function without undocumented workers.

“It’s really difficult to find, say, a hundred berry pickers when you need them. But those farmers have to make that harvest or they don’t turn a profit… so we need some common sense here folks.”

De Vries — now in his 60s — has seen several waves of immigration contribute to this rich agricultural area, including the one that brought him and his family here from the Netherlands when he was a schoolboy. So when he saw the way new immigration policies were impacting workers and their families, he decided to do something about it.

Out of concern for the valley’s many seasonal workers and their families, as well as for the future of his business, he made a number of changes on the farm to be able to keep migrant workers from having to move with the harvest seasons.

“We grow mostly cold-weather crops — leeks, beets, kale, chard. The goal is to provide year-round employment for the people that work with us, so that determines — to a large extent — the crops that we grow.”

De Vries has also partnered with other farmers in the area to coordinate crop harvests and scheduling needs, making sure that families don’t have to resort to moving out of state to make ends meet.

“The rest of us don’t want to move from temporary job to temporary job. Why should experienced farm workers?” asks De Vries. “You gotta uproot the whole family, move them off to a new area... your kids have to start a new school, all the money you saved from the last job is spent on the trip and you’re always working hand-to-mouth.”

While several other Skagit Valley producers have been linked to controversies surrounding farm worker living conditions and treatment, De Vries has been able to provide steady work and a better quality of life to many of his workers.

An added bonus: They’re less likely to accidentally fall into the hands of immigration officials.

“I’ve heard about people being stopped by mistake while ICE was looking for someone else and then they take that person in anyway and detain them,” De Vries says.

Research shows that most migrant workers who are arrested get apprehended while traveling from one job to another.

On the day of the kale harvest, one young field worker and seed technician, who asked that her name not be used, says she’s been able to sign a year-long lease on an apartment and has seen her children’s grades improve at school.

“What matters to me more than anything is my family,” she says. “I don’t want them to always be moving schools, changing friends. I would like them to stay here.”

She goes silent for a moment before admitting that she currently doesn’t have proper legal documentation: “It’s worrying, but for us undocumented people it’s always this way, only now it’s worse.”

De Vries, for his part, insists that he is following the law to the letter and he has seen few arrests at the farm this year. But in the Skagit Valley, Ralph’s Greenhouse is the exception rather than the rule. Arrests, detentions and surprise sweeps continue to rise.

With the immigration debate raging on Capitol Hill, this community and others like it around the country are watching closely, waiting to see what other policy changes may be in store.

Whatever comes of that debate, increased enforcement is likely to be expensive. According to the American Farm Bureau Federation, if all undocumented farm workers left the country, the farming industry would lose between $30 and $60 billion in total revenue. Meanwhile, government spending on immigration enforcement has risen by $1.5 billion per year.

The undocumented worker at the kale field says the crackdowns miss a critical point.

“Some people say we’re taking away their jobs. That’s not true,” she says. “Latinos, Hispanics — the ones who do the heavy jobs and all the harvesting — our work extends to the entire country. Even to the plate of the president!”

If you found this interesting, you might be interested in Knute Berger's road trip across Washington on Highway 2.