What has made Yayoi Kusama the hottest ticket in Seattle? 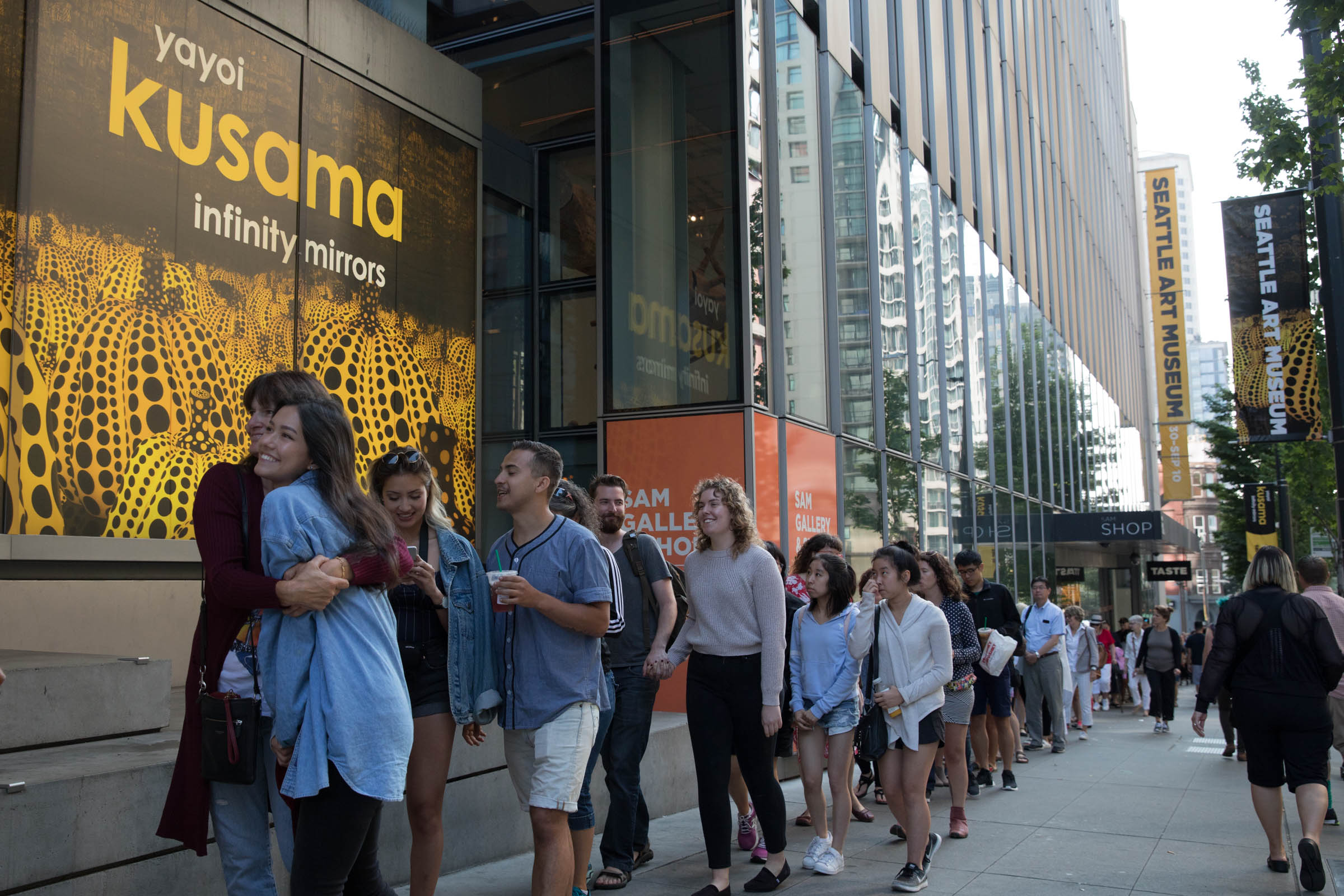 For the entire run of Yayoi Kusama Infinity Mirrors, which comes to an end Sept. 10, every morning there’s been a line snaking around the block before the Seattle Art Museum opens. And then through the lobby once the doors open. As anyone in the arts can attest, this ain’t the norm, at least not in Seattle.

Yayoi Kusama’s show is certainly worth seeing, but the cultural phenomenon that has propelled people to get out of bed early and hightail it downtown to queue up is itself really fascinating.

For research purposes, I decided to hang out on-line, so to speak, or with the line, at least along its perimeter, asking people why they were there. And the two curators at SAM responsible for bringing the exhibition to Seattle offered their thoughts about why they thought the show has been such a hit. They booked the exhibition before it had opened at the Hirshhorn Museum in D.C. — Seattle is the first stop on a five-museum national tour for the Hirshhorn-arranged show. Long lines also materialized at the Hirshhorn.

Kusama, the 88-year-old Japanese born artist, wanted the exhibition to travel to Seattle because her first trip out of Japan was to Seattle in 1957. She had written cold to Northwest artist Kenneth Callahan, sending him nine of her paintings, and he responded with an invitation to come visit. She stayed long enough to create the work for an exhibition, decamping a few months later to New York, which had long been her destination. Besides securing a green card, she made a serious splash there. She travelled back to Japan for the first time in 1970, then returned to New York. Then, in 1975 while back in Tokyo, she was hospitalized for mental illness. She has lived in and worked out of Japanese mental hospitals ever since.

The Infinity Mirror Rooms are the attraction, as everyone agrees. Google them. In fact, the Rooms are deep in the web and most of all social media, as are the selfies that people snap in them. This became obvious as soon as I inquired of line-waiters why they were there. “I heard about it on the news” (others said the “papers,” a rather quaint term these days), “It’s all over social media,” “I heard about it from my friends”, “I saw it on every bus”, “I’m 19, and lots of people my age are coming here on dates so I got up at 6 a.m. to wait in line for tickets.” And, “There is a huge hype, so I had to check it out.”

Selfies aren’t exactly expected, encouraged, even allowed in many museums. Yet when I entered the first of the mirrored rooms for my allotted 20 seconds there alone, I was told I couldn’t take my notebook and pencil inside, but a phone/camera was fine. The guard explained, correctly as it turns out, that the policy was according to the artist’s wishes. Kusama, who can be eloquent about her work, has stated emphatically that she sees the selfies — and their limitless extension in the electronic ether — as a logical and very welcome extension of her work.

The writing of Marshall McLuhan, who is now sometimes credited with having predicted the internet, was much read in the ‘60s when Kusama’s work first gained interest in New York. He broke new ground by examining the extension and fragmentation of electronic media and their “psychic and social consequences.” He also wrote, “The mark of our time is its revulsion against imposed patterns.” Kusama, who covers every conceivable surface with patterns, has herself written extensively about wanting to send her patterns — which she clearly does not see as revolting — out into the world. The electronic media do that remarkably well.

Many of those on-line said they rarely came to art museums, but some had traveled far just to catch this show. Those waiting to purchase tickets (for which they would have to return later actually to be admitted) weren’t, however, just connected young people. They often were accompanied by parents, grandparents, family friends and summer visitors. And there was certainly a goodly number of Asian Americans. Several young Asian-American women said they particularly wanted to see this all-encompassing work by an Asian female, who has long toiled in a male-dominated arts universe.

A number of young women said they were particularly taken by the backstory of her mental illness, which, naturally, they knew, and knew well, from social media. “She will show us what is in her mind, even though she has a mental illness,” one woman said. One group of Asian-American women discussed how mental illness is hidden and taboo in Asia, and how courageous Kusama must have been to discuss her condition openly and make art with her “visions.”

An Asian-American artist friend who saw Tokyo’s big Kusama exhibition this year said the artist’s mental condition was thoroughly discussed in the wall text and in the Japanese media, something she both marveled at and missed at the SAM iteration. Catharina Manchanda, the curator of modern art at SAM, said the Hirshhorn curator of the show, Mika Yoshitake, was particularly sensitive to how Kusama has been diagnosed and “over-diagonosed” publicly. And Yoshitake was attuned to how women artists, in particular, are often seen in reference to their bios, sometimes to the detriment of their work itself.

The subtext I began to see from talking to people at the museum, and reading Kusama’s statements, was defined by boundaries. Kusama has chosen to bound past any obvious limits as she aims at the infinite (she has also been creating Infinity Net paintings for decades). This may or may not be the result of her mental condition, which is beside the point. But it is true that the very issue of mental illness is itself very bound up in judgments and special considerations. What is remarkable about the exhibition is that it really doesn’t matter how the curators have framed it, people have connected to streams of consciousness flowing right through the museum and out into the street. It’s very fitting, almost willfully symbolic, that people are talking with one another as they stand together outside. She couldn’t have engineered delivery of her message better if she had tried, or maybe she’s been working at that very accomplishment all these years.

Those waiting said they had heard that being in the Infinity Rooms was “very neat,” “fun,” “intense.” SAM’s Chiyo Ishikawa, deputy director for art, talked about how the entire exhibition was experiential, and surely much of its appeal. Or, as SAM Curator Pam McClusky put it, “People crave experiences.”

Kusama has been candid about her obsessions, and the work here is absolutely obsessive, replete with infinitely repeating polka dots. But many, if not most, “important” artists are obsessive; it’s almost as if without an overarching, never-ending dedication, they can’t lock on to the bandwidth necessary for fame.

And certainly many artists, with important work dating back to the late ’50s, have created installations that are fashioned, built and promoted as immersive experiences. Much of their work can be fascinating and very involving, and many, like Kusama, have used technology, playing with spatiality, light and color. But the viewing of these environments has tended to draw a niche audience of art aficionados, not hordes of people waiting their turn. As the SAM curators pointed out, a popular show doesn’t mean the artist is commercial or shallow.

So why Kusama? It seems she’s tapped into a converging confluence of contemporary interests and issues, having accomplished this by being open to the thrust and force of electronic media. But unlike other artists who work with electronic media, she extends, with great facility, her art into the media, rather than vice versa. She has written about how the work allows her “self-obliteration” and, almost paradoxically, a great power of connection to others. That she can deliver a sense of mysticism reflected in countless mirrors is much of the wonder.

Despite being closed into a small Infinity Mirror space alone, the exhibition visitor is allowed to “float” safely, easily. These few seconds of experience comes with no danger of overdose or a bad trip, no elaborate planning or arrangements are required. It allows a “glimpse” (a word heard often among those waiting) of another world. In our frantic, overloaded world, that may be about as much time as people have to devote to such things. Kusama is clearly no Jeff Koons, not an artist after the easy sucker-punch. But she has nonetheless brought to SAM a tastily digested experience, ready for sharing. She gives us plugged-in pleasure: Taking in the Infinity Rooms takes about the time required for typing out the requisite 140 character tweets, or snapping and posting a selfie. She understands, as McLuhan did before her, that the media will become the message, and she has put that knowledge to infinite use.