Why it took five accusers to bring down Ed Murray 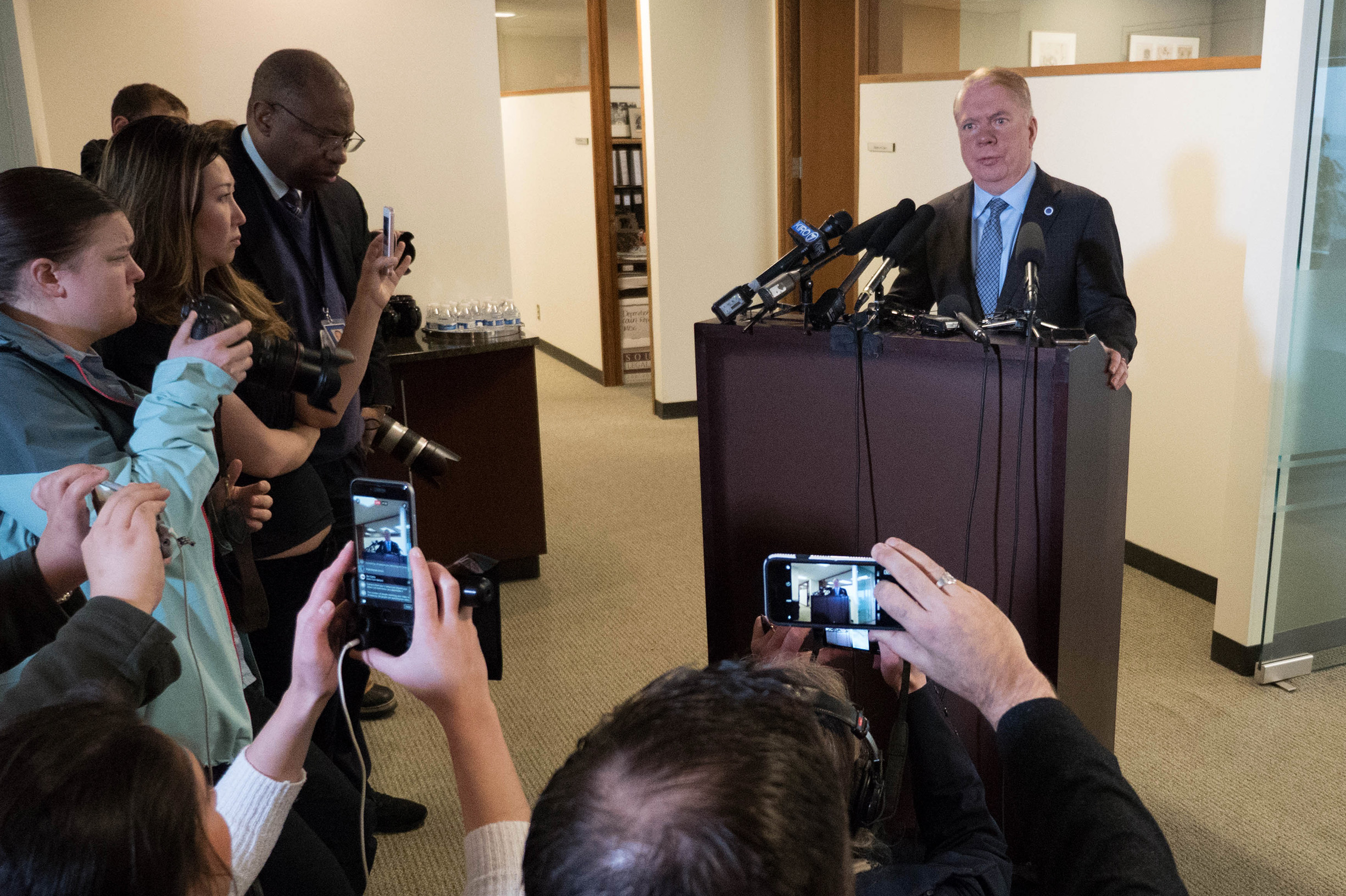 Seattle Mayor Ed Murray addresses the media at 1 Union Square regarding allegations of past sexual abuse on Friday, April 7, 2017.

This week, after a fifth alleged victim of sexual abuse stepped forward, several local politicians quickly, in some cases awkwardly, walked back on their support of Ed Murray, the former mayor of Seattle.

Mayoral candidate Jenny Durkan abruptly ditched Murray's endorsement on Tuesday, calling on him to resign even before she could erase any evidence of his endorsement from her website. City Councilmember Tim Burgess, who had previously remained supportive of the mayor even after sexual abuse allegations against Murray first surfaced in April, suddenly called for his ouster. And at his swearing in Wednesday, the new mayor of Seattle, Bruce Harrell, changed his tune, saying that previous comments about not judging Murray had been taken out of context and adding that if a “heinous act” was committed 30 years ago, that person should indeed be held responsible.

Before Tuesday, only two city council members — Kshama Sawant and M. Lorena González — had asked Murray to step down.

“It got to be a little bit of a political circus to me as an outsider looking at it,” said Terrence Carroll, a retired King County Superior Court judge and former head of an independent review board charged with examining Seattle Archdiocese clergy sex-abuse cases. However, while some might argue human memory is notoriously unreliable, especially in situations where the alleged incidents happened decades ago, Carroll said the number of accusations became "hard to refute."

Around the country, victim advocates have watched the sexual abuse allegations unfold in the Emerald City, angry but not surprised that it took published reports about five men before Murray would finally agree — with a resignation effective Wednesday afternoon — it was time to go.

While saying that the accusations are untrue, Murray said he was resigning because it is "important that my personal issues do not affect the ability of our City government to conduct the public’s business."

Advocates of victims of sexual abuse and sexual assault have become almost used to seeing someone in power hold their position and their standing with much of the public until a pattern of fresh accusations emerges. From Bill Cosby, a well-known entertainer whom dozens of women have accused of sexual assault — none proven so far — to priests and other clergy accused of sexual abuse, the public at large seems to be slow to turn against powerful leaders accused of sexual wrongdoing. The same pattern has been seen in politics, including here in 1992 when a U.S. senator, Brock Adams, decided not to seek re-election after eight women told The Seattle Times that he had sexually assaulted them. The women came forward several years after a congressional staffer had publicly accused Adams of assaulting her.

“I think we deceive ourselves into believing 'I can spot a predator,'” said Barbara Dorris, managing director of the Survivors Network of those Abused by Priests, or SNAP, a national organization based in St. Louis. “It’s not the dirty old man in the bushes.”

“He did do good things,” Dorris said. “So we’ve got to deal with this blurry image of" who a child predator may be.

"A mayor of a major city is going to be given the benefit of the doubt,” said Christopher Anderson, former executive director of MaleSurvivor, an organization based in New Jersey that provides resources and support for male victims of sexual abuse. “We don't want to believe people who have risen to some degree of power and influence are capable of doing bad things.”

“Look at the situation with Donald Trump,” Anderson said, referring to reports by several women that the president sexually assaulted them, which surfaced before November’s presidential election.

So far, Murray's alleged victims are all male and include Joseph Dyer, Murray's younger cousin and the most recent accuser, who says he was molested in New York in the 1970s when he was just 13. Jeff Simpson, a former foster son of Murray’s, claims he was also abused at age 13. In July, The Seattle Times reported that documents showed that an Oregon child-welfare investigator in 1984 had found Simpson’s allegations valid. Another alleged victim, Lloyd Anderson, claims he was paid for sex as a teenager by Murray in the 1980s in Portland. Delvonn Heckard sued Murray earlier this year over abuse. And Maurice Jones claims he was introduced to Murray by Heckard and was also abused.

In addition to standing by those who are viewed as society’s moral leaders, the public often also looks at victims of sexual abuse skeptically, especially male victims, because it can take years before they come forward, said Mary Ellen Stone, executive director of King County Sexual Assault Resource Center. About 4,000 cases of sexual assault and sexual abuse were reported in King County last year and while most sex offenders are male, about 20 percent of victims are male, according to Stone.

“There’s a great deal of shame for men in particular to acknowledge they were sexually abused. It challenges all their ideas about what it means to be a man,” said Richard B. Gartner, a New York psychologist and the author of several books on the sexual victimization of boys. Society tells men, Gartner said, that they're supposed to be in charge of sexual situations, so they either convince themselves the abuse wasn't a big deal, or that it never happened. They also fear no one will believe them if they do come forward, so often they don't.

When the sexual abuse story first broke, Murray argued that an alleged victim's criminal past should lead the public to distrust the accuser and any allegation of abuse. Murray even penned an op-ed for The Stranger, writing: "I would never suggest that those with criminal histories cannot be victims of abuse. Rather, his criminal history proves he cannot be trusted."

“We will never know what happened,” Stone said, referring to the allegations pinned against Murray. But "what the victims said rings true to what we hear everyday.”

The situation that has unraveled with Murray “reinforces the importance of believing victims,” Stone said. “Victims bring different backgrounds and experiences but that doesn’t negate that they’ve been victimized.”

Mary Dispenza, SNAP's representative in the Pacific Northwest, agrees, saying that survivors of sexual abuse rarely lie. “When they come forward, you can count on it to be the truth,” Dispenza said. As far as experts can tell, the percentage of false accusations falls somewhere between 2 and 10 percent.

“I think it’s appalling to me that the mayor so blatantly says, I deny categorically,” Dispenza said. “I would think he could find a way to say that that is more palatable.”

“It continues to be a form of bullying survivors,” said Dispenza, a survivor herself who was abused by a priest as a child but didn't come forward as a victim until the age of 52.

“The approach he took is, I know, disappointing to a lot of people,” said Carroll, the former judge. But “the motivations for victims to come forward are just as complicated as the motivations of the person accused.”

“I just have a real sense of sadness about the whole thing,” Carroll added. “It's bad for all of us in the city.”

With regard to male victims, Anderson of MaleSurvivor said it's important that the public not associate child abuse with homosexuality. "They are separate entities that sometimes coincide within the same person,” Anderson said. First and foremost “these are people who are looking for targets of opportunity.”

Despite the various allegations, Michael T. Pfau, a Seattle attorney who has dedicated a large part of his practice to representing victims of child sexual abuse, said the chances of Murray facing any criminal charges are slim because the statute of limitations have likely expired. Carroll agrees, noting that “the likelihood of any criminal charges, unless other people come forward, is next to zero.” But Pfau said the "possibilities of suing him civilly are great.” Washington law allows for delayed discovery, giving victims of abuse three years from the time they make the connection between the abuse, and the damage they've suffered, to sue.

Just before Murray's resignation, former Mayor Wes Uhlman said that Murray, with whom he had lunch about a month ago, was prepared to face possible civil legal action when he departed office. "I believe that justice will prevail," said Uhlman, a lawyer. Uhlman added that he doesn't know the truth about the allegations against Murray.

SNAP's Dorris and Pfau said they wouldn't rule out other people coming forward with accusations against Murray.

On Thursday, Amnesty International in Northern Ireland called on police there to check records and determine whether there were any outstanding allegations against Murray. In 1974, Murray apparently led a group of 30 Catholic and Protestant children on holiday in Wales.