The Amazon groveling is turning into a sport 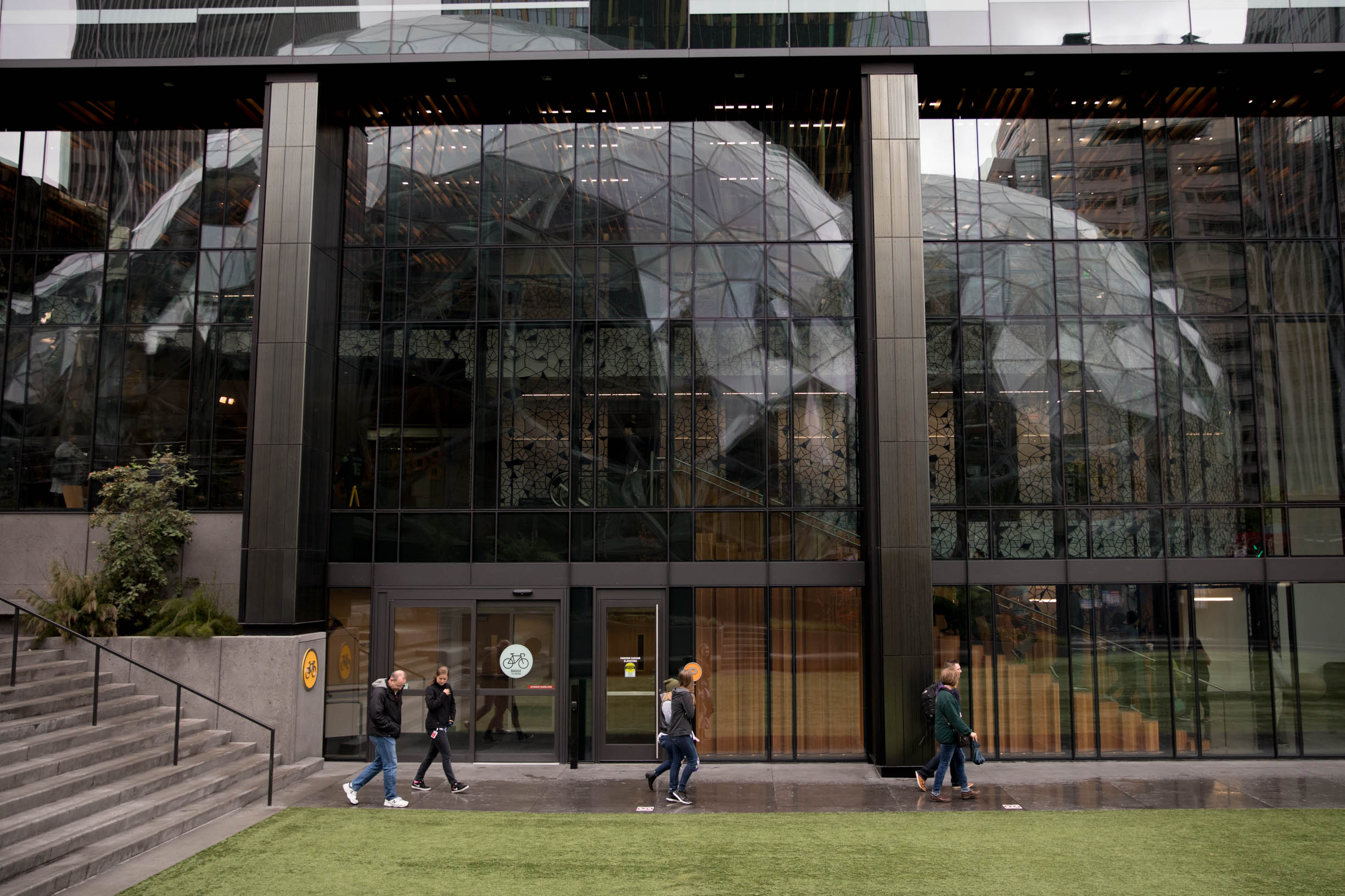 Amazon's biospheres reflect in a building at the Seattle campus in South Lake Union.

The deadline for Amazon’s HQ2 bidders has passed with a flurry of embarrassing promo efforts by North American cities groveling to serve. Now that Amazon has established which cities they are, they need only negotiate a price — that is, what price the winning city will pay for the honor of hosting the Big A.

There is something unseemly about the whole thing. Jeff Bezos is one of the richest men in the world, driven to new heights in the Trumpian stock bubble, yet his company has turned the continent’s great cities and townships into competing clown-ships. Calgary says it will wrestle a bear for Amazon. Tucson sent a cactus (since rejected). New Jersey promises $7 billion in tax breaks. A town in Georgia offered to give the company 345 acres of land and name the new site “Amazon, GA.”

And “sport” is the word. Amazon is adopting tactics not unlike those of professional sports franchises and leagues that pit cities and suburbs and states in bidding wars over teams and publicly financed facilities. How many billions will you give our billionaires?

Amazon is now playing that game. Maybe sports journalist Art Thiel is the best person to be reporting on this.

I recently visited Ed Lazowska who holds the Bill & Melinda Gates Chair at the University of Washington’s Computer Science Dept. We sat in his office at the Paul Allen School of Computer Science and Engineering on the UW campus and talked about the shortage of computer whizzes.

We’re not turning out enough graduates to meet the demand, even though the UW is attracting students from all over the world. Estimates are that we’ll be producing less than half of the state workforce needed in computer sciences by 2018-23.

That shortage is reflected in the kinds of offers kids are getting. UW computer science graduates are being treated like athletes now. They can make a six-figure salary right out of school, and many are receiving signing bonuses from tech companies. Lazowska says those bonuses range from $25,000 to $100,000, plus stock and other benefits.

That’s big money for a smart kid with a bachelor’s degree. That’s an instant down payment for a house or condo — even in this pumped-up market, generated instantly before a finger has been lifted. Who needs to save for 15 to 19 years like a teacher?

Seattle has lessons to teach, and apply to itself, in light of how Amazon and tech are changing the city.

First, a city is best when it incubates and innovates. Starbucks, Nordstrom, Boeing, Microsoft and Amazon are essentially home grown. To me, it’s better to have empty garages and warehouses for startups than to prostrate ourselves to lure companies with public largess that is better used elsewhere. Remember: Bezos chose to put Amazon here because of who we were, not the other way around. We didn’t swear to rename Seattle Bezosville.

Second, Seattle drew the line at bending over backwards for rich sports owners. It took a while to learn that lesson, but we did. In doing so, Seattle is now considered a leader in ensuring that private investors — as in proposals for a new “Sonics” arena — privately finance such projects and in insisting they help fund solutions to issues like transportation. Let the billionaires pay to play that is the message Seattle should send to Amazon if it tries to leverage its HQ2 into future subsidies or tax concessions here.

So, we seem to have figured out sports, but we have larger problems. Lazowska worries about the direction — or rather, lack of direction — Seattle and Washington State are taking in solving some fundamental problems here. He says tech companies find it easier to recruit to Seattle because we don’t have the extreme affordability issues — yet — of the Bay Area. We have time, he says, to capitalize on that advantage, if we’ll take it.

He quickly ticks off problems we still need to, and have time to, solve: We have one of the most regressive, antiquated tax systems in the country. Fix it. We need to improve and fund K-12 education. We’re not doing enough in higher ed to support and train for the current and coming economy. And there’s the affordability crisis which is threatening what was once a major urban asset: mixed neighborhoods where housing was available to all income levels — kids of all classes going to the same schools, playing in the same playgrounds, parents drinking in the same bars.

That is the real threat. Not Amazon moving to Seattle, but failing to build on the strengths that got us here, and solving the systemic issues in the tax system, education, housing and affordability that are contributing mightily to the woes of affluence.

Seattle has no apologies to make for Amazon seeking greener pastures. But we’ll be sorry if we don’t remember what our assets are, and focus on fixing what needs to be fixed.