Don't cry for Seattle Weekly. It's not dead 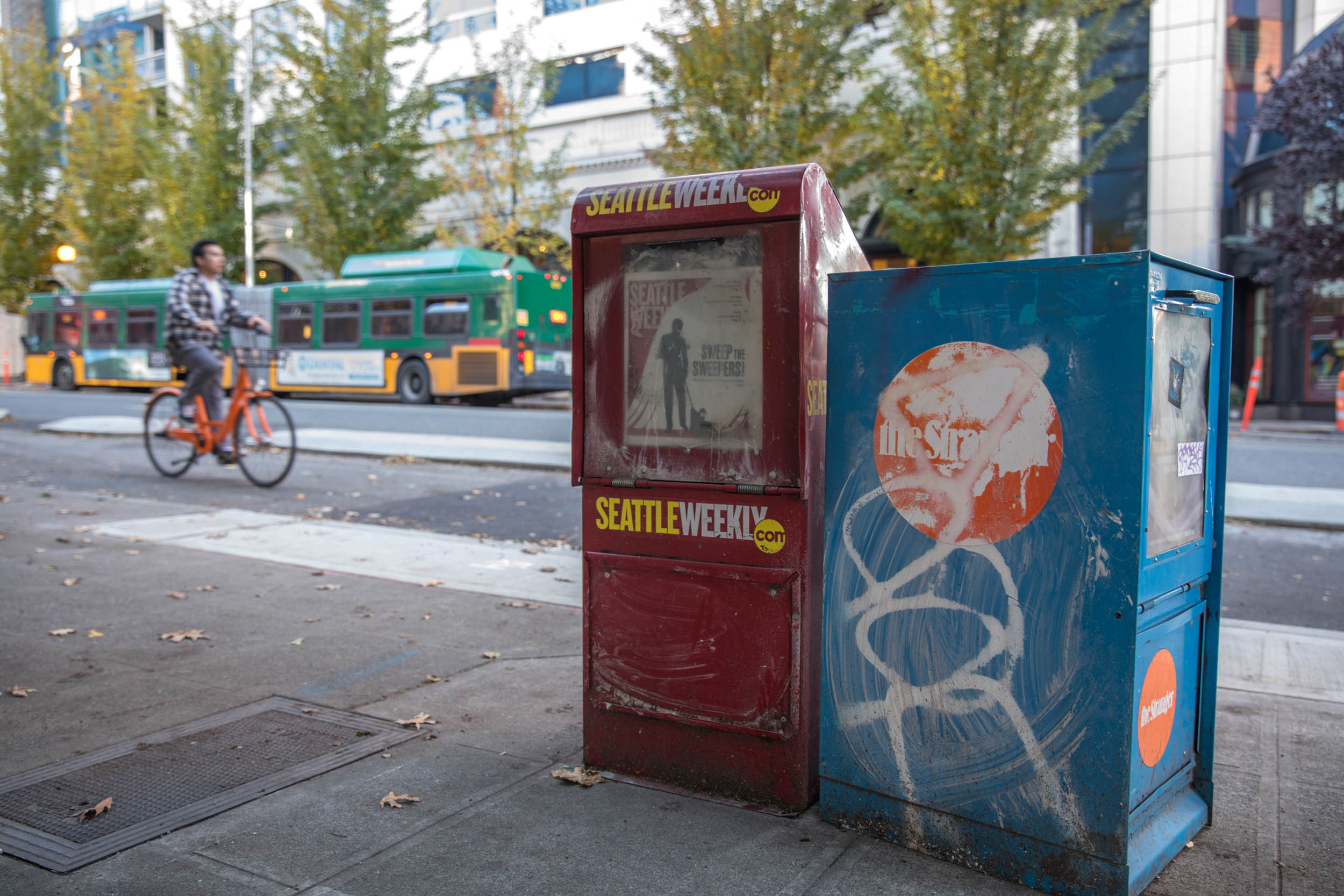 Seattle Weekly and The Stranger news boxes are seen in Seattle, Washington. Once alt-weeklies, both have made changes in either design and/or publishing schedule. (Photo by Matt Mills McKnight/Crosscut)

The news late last week that big changes were afoot for Seattle Weekly was greeted by former staffers like a death in the family. For more than 40 years, the venerable alt-weekly has been a major journalistic force in the city. On Facebook Nancy Leson, the former Seattle Times food critic who got her start at the Weekly, called it “sad news…and (sadder still) about local journalism.” Former weekly political columnist Geov Parrish summed the feeling of many ex-staffers and fans more simply: “RIP Seattle Weekly.”

News of the Weekly’s “death” might be slightly, if not greatly, exaggerated. Its owner, Sound Publishing, has drastically cut an already reduced staff and is morphing the paper into a more fitting link in its chain of community newspapers. Current editor Mark Baumgarten, who has done a yeoman’s job in the paper’s declining years, is still on board and promises there will be worthy news coverage ahead.

Even so, the change appears to mark the end of an era that’s been coming since the millennium. Many alt-weeklies are in rapid decline, ditching their print incarnations (like the venerable Village Voice) or undergoing radical makeovers like The Stranger, now a print fortnightly with a magazine format to augment its Slog.

The heyday of these papers ran roughly from the 1970s until 2000, or shortly thereafter. The first ones were driven largely by baby boomer audiences and the revitalization of cities. They offered alternative coverage to the dailies — challenging, tweaking, speaking truth to power. But they could not avoid media sea changes, especially the rise of the Web and the Ebola that was Craigslist, which proved fatal for many papers.

The Weekly was always an outlier in the Alt World. While many alt-weeklies were launched to appeal to young hip readers, Seattle Weekly had more mainstream roots. David Brewster, its founder and longtime editor and publisher, says “When it started it was aimed at young professional readers, as opposed to [the] youth market.... Thought [it would] be what smart folks would read in their 30s before settling for a daily once kids came along.”

In the beginning, the paper seemed more like an alternative version of The New Yorker with a staid yet innovative design by the genius marketer Terry Heckler, the guy responsible for the Starbucks logo and classic Rainier Beer ads. He modeled it on the Swiss financial press. The paper was serious, thoughtful and featured long-form journalism and threw great and unlikely writers at various beats. An example: The Sonics beat writers included University of Washington professors Roger Sale and David Shields. Alan Furst, now an acclaimed novelist, covered the Seahawks.

City-building and pushing Seattle in a more cosmopolitan direction was part of the paper’s DNA. Its mission was to give the city the kind of thoughtful journalism and arts coverage that a major city deserved. Targeted readers were yuppies, a new phenom in the ‘70s and ‘80s, but the Weekly also targeted college-educated, civically engaged readers of any age. Instead of young male clubgoers, it attracted a strong female audience, unusual among alt-weeklies. Unlike the mostly-free alts, it prided itself on having a classier paid circulation.

The original investors in the Weekly included Bagley Wright, a major philanthropist and arts patron, and many of the staff were veterans of the original Seattle Magazine of the 1960s, published by KING Broadcasting, which also pushed Seattle to be less provincial and featured thoughtful cover stories on gays, sex and political corruption that shook the city and its establishment. If Seattle Magazine was ahead of its time, the Weekly was of its time and filled a niche that straddled alternative papers and city magazines.

Its journalism made a mark. Its coverage of politics influenced the careers of many politicos, from Dixy Lee Ray (Madame Nuke, as she was dubbed by the Weekly) to Gary Locke (“The Man Who Mistook His Life for the Legislature,” a headline ran). It was an urbanist paper with architecture critics whose eyes most often focused on downtown. Some criticized the Weekly for loving the city too much. In 1990 at an alt-newsweekly conference in Denver, I remember the colorful editor Mike Lacy of Phoenix New Times thundering that the Weekly’s love of its city was inappropriate — that was the job of the Chamber of Commerce, he bellowed. The Weekly never saw itself as an outlaw, as many alts did, but as a place for great writing and building a better city.

Seminal stories over the years included the Weekly’s critiques of The Commons and Monorail proposals, great reporting on the environment (Paul Roberts on the spotted owls), an early in-depth series on Ted Bundy by Steven Winn, prescient reporting on Microsoft by Fred Moody, and ahead-of-the-curve coverage on the WTO protests.

The Weekly seemed like an institution from the beginning — the paper the city had always needed — but it was a constant improvisation. It lost money or broke even in the early years. Any excess funds were plowed back into building an editorial stable, or launching new ventures, but the future never seemed assured.

It survived various recessions by stumbling upon new sources of ad revenue: it pioneered personal ads in Seattle, then it picked up ads from local retail chains like Magnolia Hi-Fi and The Bon Marché that grew tired or priced-out of the dailies. In the early 2000s, there was a surge of dot-com advertising until the bubble burst.  More recently, under different outside ownership, it sadly carried Backpage, the controversial sex ad site. In recent years with ads dwindling and no major new revenue sources, there seemed to be less room for maneuvering.

Over the years, the Weekly sold typesetting and design services; it bought Puget Sound Enatai, a newspaper for the region defined by the inland sea and available on the ferries; it founded the regional Sasquatch Books; it co-owned a printing company; and it launched a separate Eastside alt-weekly, Eastsideweek, in 1990, an effort to capture an increasingly sophisticated suburban audience in the Silicon Forest. Most of these ventures ended or sold off. I joined the company to head the Eastside effort in 1990. The major reason I did was I loved the fact that Brewster was always interested in The New and The Next.

Fred Moody, the former Weekly writer and managing editor who now tends bar at a family saloon in Greenwood, has long seen this day coming. He left the Weekly near its profitable peak in 1999, but felt the paper was doomed as too much a product of baby boomers and their era. The paper had always responded to competitors: The Seattle Sun, which spun off the lively music paper The Rocket, and The Stranger among them. Many of the ‘70s alt-weeklies faced new competition from new papers like The Stranger which Brewster calls “the alt alts” that he says had more in common with 1960s underground papers.

In the mid-90s, the Weekly shifted from paid circulation to a free distribution model. It also began chasing a younger audience with expanded music coverage and edgier stories. This partly reflected a younger staff that was embarrassed that, for example, the paper has missed the coming of grunge entirely, despite sharing an office building with Sub Pop. Nirvana who?

Moody also feels that the purchase of the Weekly by the Village Voice in the late ‘90s signaled an era where outside marketing decisions inevitably would impact the paper’s decision-making as it became part of a national alt-weekly chain. By the early 2000s, the city was outrunning the paper and Moody was sniffing out a slow death spiral for the paper. Those of us still in the Weekly trenches did not want to believe it.

Another factor was the success of The Stranger in reaching coveted younger readers. For a while, it seemed like Seattle could support two major alt-weeklies. In the early 2000s, though, The Stranger and the Weekly secretly explored merging the two competitors, but the “Strangeekly” never came to be.

As the Weekly has faded and with The P-I daily print newspaper gone, The Stranger has become more mainstream —not just with a Pulitzer to its credit— but as the kind of civic force the Weekly was back in the day. The re-design of the print paper to a magazine format—with its frequency cut in half — is both an admission of the problematic economics of print and a tip to the enduring appeal of a more magazine-like format. Its relatively staid new design suggests less an outlaw paper than one taking its place in The Establishment. The city has moved to the left and The Stranger reflects the current mainstream views on politics, culture and urbanism, views it has long espoused.

I joked recently with Tim Keck, The Stranger’s publisher, that I hated to hurt his brand but I liked his print redesign. The Stranger has reached middle age but in trying media times. Some see great potential in the need to innovate and change. A recent story by Damian Radcliffe, professor of journalism at the University of Oregon, looks at 10 Northwest media outlets and suggests we could be on the cusp of a local news renaissance as organizations adopt new tools, try new ways of engaging audiences and throw out the playbook. The local media has a future but the forms it takes are in process.

The Weekly is morphing, and its large, smart and free-ranging newsroom of old is gone. That is mourned more than changes in the paper per se. But that newsroom launched careers, reshaped the city, enriched local journalism and continues to even now. Crosscut, founded by Brewster a decade ago, is a testament to post-Weekly journalism.

As for the alt-weekly version of the Weekly, it might be gone but who knows what the new entity might spawn? I’m rooting for anyone who stays in the game and is willing to try something new. After all, that’s where the alt-weeklies came from to begin with.