Got land? Seattle does and assessor says it should house the homeless 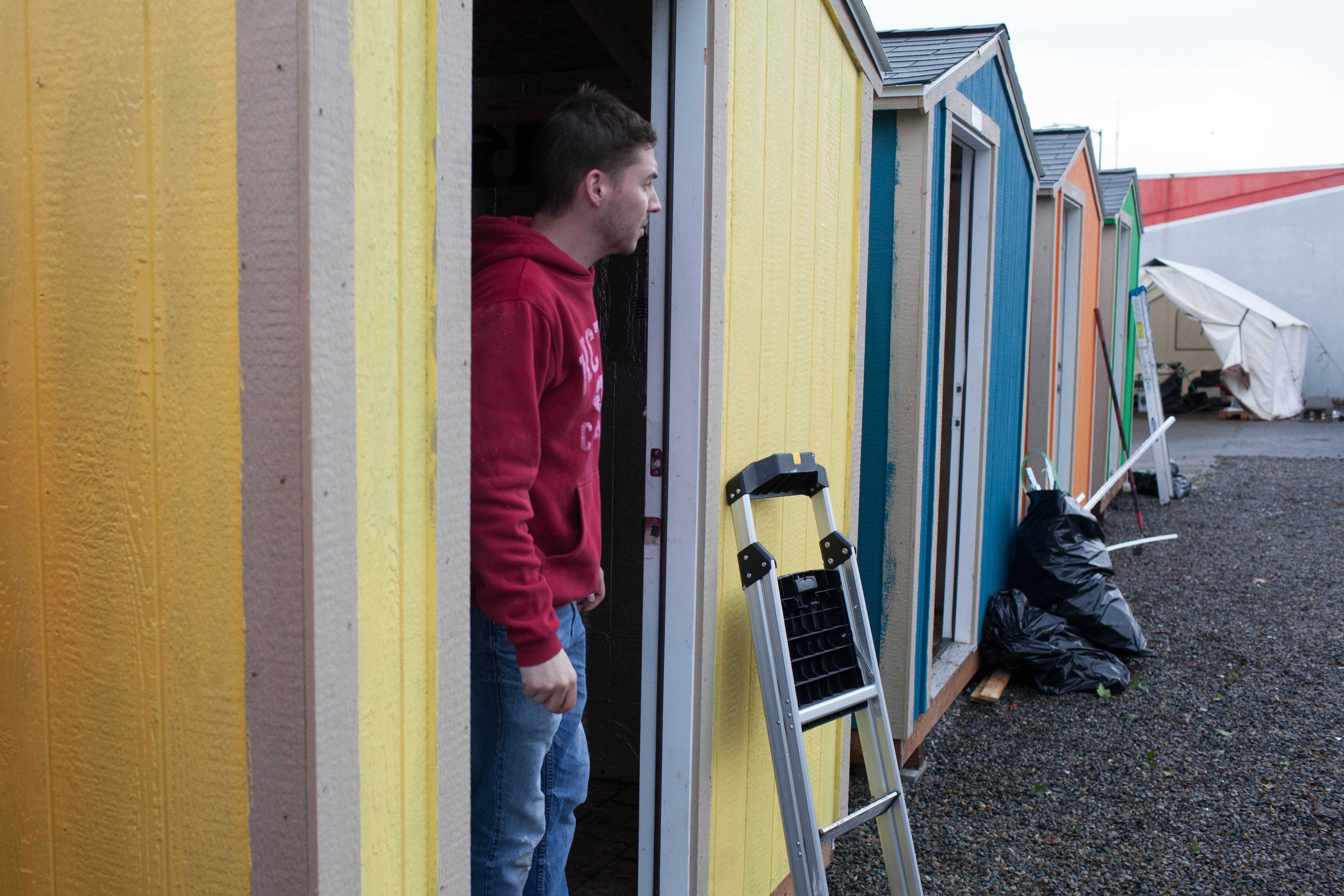 Othello Village, a tiny house encampment for the homeless, as it was being constructed in Seattle's Rainier Valley, February 28, 2016.

King County Assessor John Wilson says there is "entirely" enough underused land in Seattle to shelter 1,000 homeless people a year. "I’ve become more and more convinced that we have adequate land capacity to solve the housing problem in this county,” he says. “It’s a question of, 'Do we have the will?'”

Shortly after his 2015 election, Wilson ordered a map of every vacant or underused parcel of government-owned property inside the city limits. The effort was spurred out of conversations with his longtime friend, Seattle City Councilmember Sally Bagshaw, who has long believed the city has available land to address the region's homelessness crisis.

Seattle's Office of Housing has tracked property owned by the City of Seattle before, concluding that, while there is some surplus property, very little can address the housing crisis.

But Wilson's map goes further, cataloging property owned by the City of Seattle, King County, the State of Washington, University of Washington, Washington State University, the Port of Seattle, Sound Transit and all other government-owned land within Seattle. The map identifies more than 300 spaces that are larger than 20,000 square feet and are located within a quarter-mile of transit.

There are hurdles to using these parcels, some of which are likely insurmountable, such as contamination or terrain that is, for example, too steep to build on.

Additionally, there are two significant bureaucratic obstacles to potentially using the land: First, under state law, surplus utility land must be sold at market rate prices, even to a city department; and second, the city's zoning and permitting processes make it difficult to construct shelters on some underused lots.

But Wilson thinks these obstacles are surmountable. Since receiving the map, he's been in talks with State House Speaker Frank Chopp to pass legislation making utility land more accessible. Chopp is supportive and is researching the issue, he told Crosscut.

Wilson also believes the State of Emergency declared by former Mayor Ed Murray and King County Executive Dow Constantine could be used more liberally to get around zoning issues. Murray said the declaration would allow for speedier construction of shelter in areas not currently zoned for that. But Wilson argues, “I’m not sure that that’s how it’s been acted on.”

Wilson has blunt words for Murray, saying he received enthusiastic feedback on the map from the former mayor's staff, but that Murray himself didn't weigh in before leaving office. “Hopefully the next mayor, whoever she is, will take a look at this and hopefully work with us and realize that there is the potential here in the city. ‘How do I drive that forward and drive it faster?’”

In an email, Julie Moore with the Department of Finance and Administrative Services said the city appreciated Wilson's work and is continuing to search for usable land.

In 2015, the City of Seattle identified 210 under-used city-owned lots but found only 33 of them usable. Although Wilson's map expands that inventory to all government-owned property, the same barriers exist.

Under state law, property owned by utilities, like Seattle City Light, Seattle Public Utilities or the Seattle Department of Transportation, must earn market-rate prices for land, a sort-of fiduciary bind between the companies and the ratepayers. According to the Office of Housing, there are 45 such properties owned by Seattle; Wilson could not say exactly how many his map tagged.

“It’s part of what’s maddening,” says Wilson. “There was a parcel we identified up on Capitol Hill that’s owned by City Light. It’s been sitting there vacant for some time now. They’re not making any money off it. We approached City Light and they said, ‘Sure you can use it for modular housing,’ and they said, 'That’ll be $91,000 a year.’”

The requirement hasn't precluded all use of utility land, but it comes at a cost: the Human Services Department is paying market-rate prices to Seattle City Light for an encampment in Interbay, said Moore with the Department of Finance and Administrative Services.

In some cases, it's been a direct barrier to using vacant areas for housing, including at several large plots of SDOT land in South Lake Union that were not used for housing, according to Curbed Seattle.

Speaker Chopp says, if and when the property is sold, the high cost makes it less likely private developers will build affordable housing. When asked if the market-rate requirement might speed the sale of public land to private owners, Chopp says, “Yeah, obviously.”

After several meetings with Wilson, Bagshaw and others, Chopp is interested in drafting legislation to allow cities to lease utility land for as little as $1 if it's for the "public benefit" — housing, early childhood education or park space. “We think they should have the option of getting these lands and putting them back into public purpose,” he says.

The upcoming session in Olympia is a short one and Chopp says he’s determined to finish on time. But he says initial advice from lawyers is that the rule does not interfere with the constitution and can be changed through a statute change.

Zoning restrictions are another reason development on underused lands can be difficult. Wilson wishes the State of Emergency was used more freely to get around this, especially because Murray said at the time of the declaration he would do so.

But this question of how far the city can go under a State of Emergency is ill-defined. The mayor's office and city council have been in conversation with the City Attorney's Office about the declaration's limits and therefore the City Attorney could not comment due to attorney-client privilege, according to spokesperson Kimberly Mills.

Hugh Spitzer, a professor of Law at the University of Washington, says it's very unclear how much latitude the State of Emergency declaration gives to the city or county. "From a practical standpoint, if the mayor and the county executive were to make modest adjustments that were not very much but kind of helped things along, it might not be challenged and might be upheld," he says. "On the other hand, if the mayor were to attempt to ignore fair, clear permitting processes, it might be challenged and then the city would have to show that this is really the kind of emergency that those state laws, the charter and this ordinance are meant to address."

There are currently seven sites in Seattle reserved for tiny homes — 96-square-foot sheds with a bed, shelves and heating. These "tiny home villages" are scattered from Othello to Ballard. Each has a communal kitchen and shared bathrooms as well as security.

Tiny home villages could be more easily situated on the identified vacant land parcels because space and siting requirement for tiny homes are more flexible. "Our housing models for providing low-income or mixed-income housing have tended to focus on, ‘I need a chunk of property that big,’” says Wilson. “And you realize that in some cases that’s not the size you’ve got. That’s in part why you look at tiny houses where you go, ‘Alright, but could you do something that is smaller or more compact but we could still house a number of people?’”

Sharon Lee, Executive Director of the Low Income Housing Institute (LIHI) that administers Seattle's tiny house villages, wants her organization to double the number of residences — a goal she sees as achievable if given the land to do it. "We’re hoping that the new mayoral administration will be more generous and expansive in use of city property," she says.

On a lot once zoned for a single-family house in Seattle's Central District, 14 tiny homes form a community for 22 people and 5 pets. It's on church property and LIHI pays $200 a month to lease the land. Many of the sheds — about the size of a horse's stall — were built by different organizations, so their designs vary: a pop-up roof that serves as a sleeping loft; burnt-cedar siding; a third painted in Seahawks colors. There’s a communal kitchen housed beneath a tent, its shelves lined with cans of beans.

Each tiny residence cost $2,200 to build, $2,500 if built off-site and moved here. It was established in 2015 out of a collaborative effort between Nickelsville, which advocates for people with homes, and LIHI.

Harley (who did not give his last name) has lived here since June, after living in several other homeless encampments nearby. He arrived in Seattle recently from Colorado, where he’d spent 13 years in prison. “Nobody I knew was out here,” which is a good thing, he says about why he moved to the Pacific Northwest.

This tiny home lot is “peaceful,” he says. He can't remember the last time he felt so stable; he's now interviewing for jobs. “It’s kind of like a little community,” he says of the village. “It has the same dynamic as a family.”

There's debate over whether tiny home villages can be a permanent solution to homelessness. But there is widespread support for them among elected officials as an alternative to unsanctioned encampments — so-called tent cities — including from both Jenny Durkan and Cary Moon who are running for mayor.

On Wednesday, council members Bagshaw and Kshama Sawant found themselves in a rare moment of agreement that the city should add more tiny homes. Sawant is proposing an additional $500,000 for encampments, although she would like up to $2.2 million to double the number of tiny house villages.

Bagshaw agreed, saying she'd like to see 150 new beds in each of the seven Seattle neighborhood districts — a goal that tiny home construction could hasten. She also said she's asked the King County Council to set a similar goal, which she thinks could result in 2,000 new beds within six months.

Prioritizing vacant land for housing was one of the many 2015 recommendations to come out of the Housing Affordability and Livability Agenda. But Wilson believes there hasn't been enough communication between the different government agencies to fully understand what's available. He says many institutions simply don't know what they have. "To one degree or another it's, 'We still have that?' and 'Oh yeah, we still own that.'"