Murakami attempts an upset against González 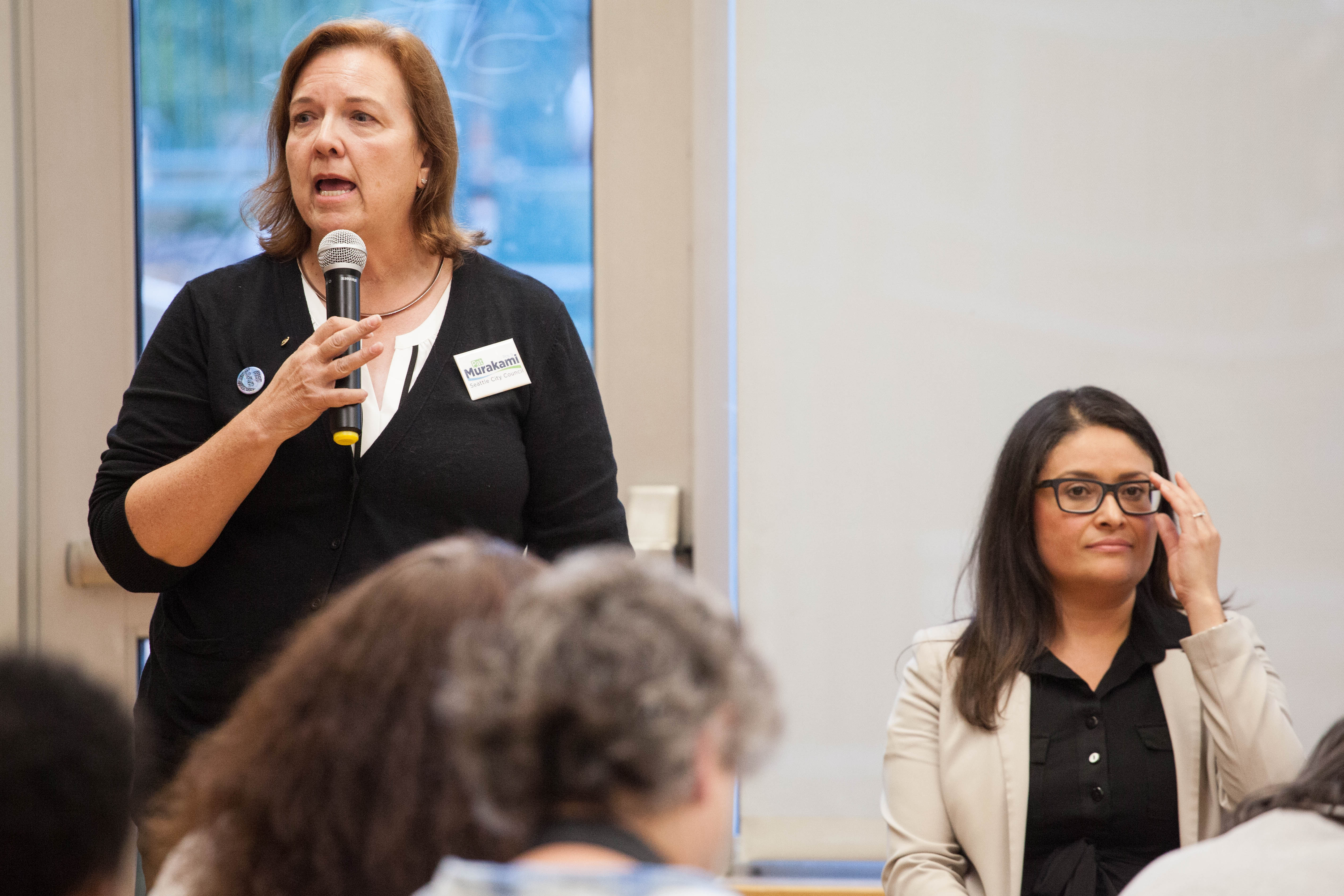 In the Aug. 1 primary election, there was a clear winner in one of the at-large Seattle City Council races. One-term incumbent Lorena González led civic activist Pat Murakami, 64 percent to 20 percent.

But Murakami has hopes to close that gap.

“It’s a huge gap … But I hope people will re-examine [González's] voting record and reconsider their votes,” Murakami said.

Meanwhile, González says she isn’t taking anything for granted.

The race for City Council Position 9 pits a south Seattle information technology small businesswoman, who thinks the government is too developer-friendly, against a former civil attorney from West Seattle, who believes the local government is headed in the right direction, but needs to do more.

Born in Chicago, Murakami, 63, moved with her family to Anchorage before attending college in Seattle and Tacoma. She ended up in the insurance industry before shifting to information technology in the 1980s.

The daughter of an immigrant Mexican farmworker family, González, 40, grew up in Grandview, Washington. She worked for one year as counsel to former Seattle Mayor Ed Murray prior to being elected to the city council in 2015.

These aren’t the only stark differences between the two candidates, and below we lay out their stances on many of the key issues facing Seattle. Underdog Murakami isn’t shy to criticize González on several fronts, while González is quick to counter her claims.

Murakami has painted González — along with the overall city council — as being too friendly to developers. “People who live in Seattle have no voice in what’s going on,” she said. “The outside developers have all the advantages in this city.”

Murakami’s leeriness towards developers dates back to former Mayor Greg Nickels’ unsuccessful attempt to declare much of southeast Seattle a “blighted” area. She contends Nickels wanted to help developers buy land along the then-future light rail line. She criticized González for not showing up at some candidate forums, and to a community meeting about police-related concerns in south Seattle.

“I dispute that fiercely … I spend a lot of time in south Seattle,” González said.

González says she's met extensively with people of color and with refugees — constituencies underrepresented at City Hall. “Ms. Murakami’s perception is that I’m not spending enough time with single-family homeowners,” she said.

Murakami wants the City to levy impact fees — which are surcharges to offset the costs of providing extra government services such as water and sewer — on developers. González is curious about the concept, but prefers to await the results of a current city study on the topic before voicing a more detailed opinion.

Both candidates discussed the controversial proposed North Police Precinct’s glass-and-steel building — nicknamed “the bunker”— that was put on hold last year because of opposition to its size and $149 million price tag.

Murakami supports splitting the North Precinct into two halves divided by Interstate Highway 5 — with a smaller brick precinct building for each. She argued it would be cheaper and more efficient than the original proposal. “The bunker was a boondoggle,” she said.

Agreeing that the “bunker” concept was too big, González wants the police department to reevaluate its approach to a new building for the North Precinct. She said the proposal had too many training facilities in it and that the City should instead study the police’s training needs separately and tackle it as a different issue.

Murakami opposes the City’s practice of “sweeping” unsanctioned homeless camps, saying those should be put on hold until new places — preferably buildings — are available for displaced individuals. She believes the City should build a single-room-occupancy building for homeless citizens.

González believes homeless people should be removed from unsanctioned sites to better places, but acknowledged that this concept still needs work.

“We’re not using the taxpayers’ money the most effective way when we’re just moving people from one place to another,” she said.

Murakami thinks that while the City has more than 100 nonprofits focusing on homelessness, it should pare down on that number and only support those who are most effective in tackling the issue.

“We don’t audit our nonprofits at all, and we need to,” Murakami said.

González opposed that view, saying, “Ms. Murakami likes to throw out unsubstantiated claims regarding nonprofits. I have not seen any evidence or sign of waste or abuse.”

As of Oct. 10, González had raised $211,785 with more than half from democracy vouchers. Murakami had raised $85,905 with slightly more than two-thirds from vouchers.

While Murakami attempts to close the financial gap, it remains to be seen if she can bridge the steep 44 percentage points that separated her and González in the primary election.

This story has been updated with financial figures for both campaigns.