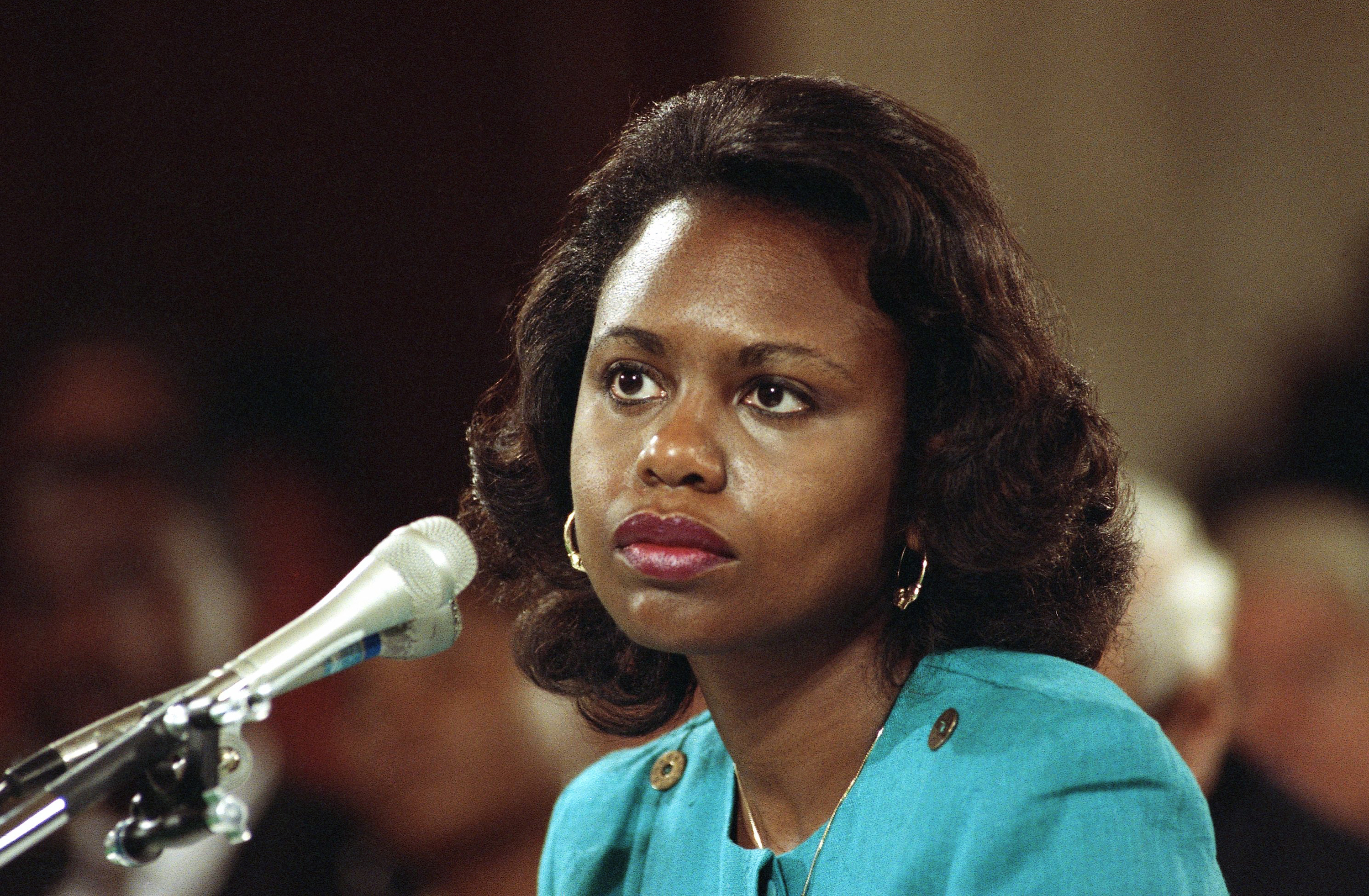 Anita Hill, University of Oklahoma Law Professor testified that she was sexually harassed by Clarence Thomas in this 1991 photo. (AP Photo)

Somewhere out there is a magic number — a threshold that, once crossed, means that maybe Harvey Weinstein or Bill Cosby or the next as-yet-unnamed powerful person, really is a sexual predator.

After all, reporter Ronan Farrow had to corroborate the stories of thirteen different women before the Weinstein story was published by The New Yorker. It took 35 accusers posing for the cover of New York Magazine before people could see Bill Cosby as a sexual predator. It took an unimaginable statistic — 1 in 5 — before we began to believe that campus sexual assault is a problem worth addressing.

This same magic threshold, once crossed, leads many to express their shock and declare their solidarity with victims of sexual violence, never before having seriously considered the extent of the problem.

Perhaps it is the unfortunate existence of this threshold that led social media users, in response to the outcry over Weinstein’s long history of sexual violence and predation, to identify themselves as victims of sexual harassment or assault with two simple words: “me too.”

Though the “me too” movement was started by activist Tarana Burke in 2007, the recent social media phenomenon was sparked by a tweet from actress Alyssa Milano, who revealed that she, too, has been a victim of sexual assault or harassment and she encouraged others to do the same.  Twitter, Instagram and Facebook were flooded with people (often, but not always, women) identifying themselves as victims, some sharing intimate stories of abuse and assault. The purpose of the campaign has been to reveal how widespread sexual assault and harassment really are and to make the problem visible to those who would deny it.

Because before the threshold is reached — whatever that magic number is — we too often conclude that any one of Bill Cosby’s accusers was really just after money, or that a rape victim was “asking for it,” or that Anita Hill was trying to get ahead when she accused then-Supreme Court nominee Clarence Thomas of sexual harassment. It’s good that people might now be willing to acknowledge the pervasiveness of sexual violence and predation in our society, but who knows whether it will be enough to change the equally pervasive disbelief and victim-blaming that keeps individual victims silent.

If we try to recall instances when a single victim was believed, most of us are probably hard-pressed to identify high profile individual cases of sexual assault or harassment. In fact, only a few readily come to mind.

There is the Central Park Jogger, whose 1989 case became sensational when five young men of color — all of whom were eventually exonerated — were accused of raping and brutally beating the victim.  The victim was young and white, and there was clear physical evidence of rape. The accused — all non-white and all described as engaging in a gang-related behavior called wilding — were the perfect scapegoats.

There is Cheryl Araujo, whose 1983 gang-rape in a New Bedford, Massachusetts tavern called Big Dan’s, became the basis for the film "The Accused."

And more recently, there is former Stanford student Brock Turner, who was discovered by two passers-by while he was sexually assaulting an unconscious woman behind a dumpster.

In each case, we believe rape happened not because the victim said so, but because someone else did:  the doctors who treated the Central Park Jogger, the bystanders in Big Dan’s tavern who saw Araujo’s rape and the students who caught Turner in the act. Anita Hill’s problem, it seems, is that she didn’t have witnesses to her experience.

In truth, victims are rarely trusted on the strength of their own voices alone, and this is a problem because most sexual assault and harassment happens one-on-one, behind closed doors, uncorroborated by others. Our culture tells us that these are cases of “he said/she said,” and there is nothing to be done.  After all, as a dear friend asked me the other night: in the face of two contradictory and unverifiable stories, “what would you have us do?”

I would have us believe that victims of sexual harassment and violence should be trusted without requiring outside verification or substantiation in numbers. That we are not believed (because, yes, #metoo), is the single most important factor that protects sexual predators and allows them to continue to terrorize their victims. When victims are not believed, when they are presumed to be manipulative or conniving or dissembling, the costs of reporting become too high and sexual predation continues.

And I would have us recognize that, underlying our inability to see the sexual violence that is all around us — and if there is one thing that #metoo makes clear, it’s that it is all around us — is our willingness to believe predation has happened only when victims come out in droves or when eye-witnesses can verify that, yes, this time, it really did happen.

#Metoo is a powerful context in which those who have not been able to say they were victimized can recognize that they are not alone. But it has the power, too, to reinforce the same old story: we will believe that sexual harassment and sexual assault really happen once we’ve hit the magic number or found a truly trustworthy witness. As long as that is the case — as long as we continue to disbelieve the victims of such painful abuse and trauma — sexual predation will continue.