Take a knee? Why we need to rise up for the working class 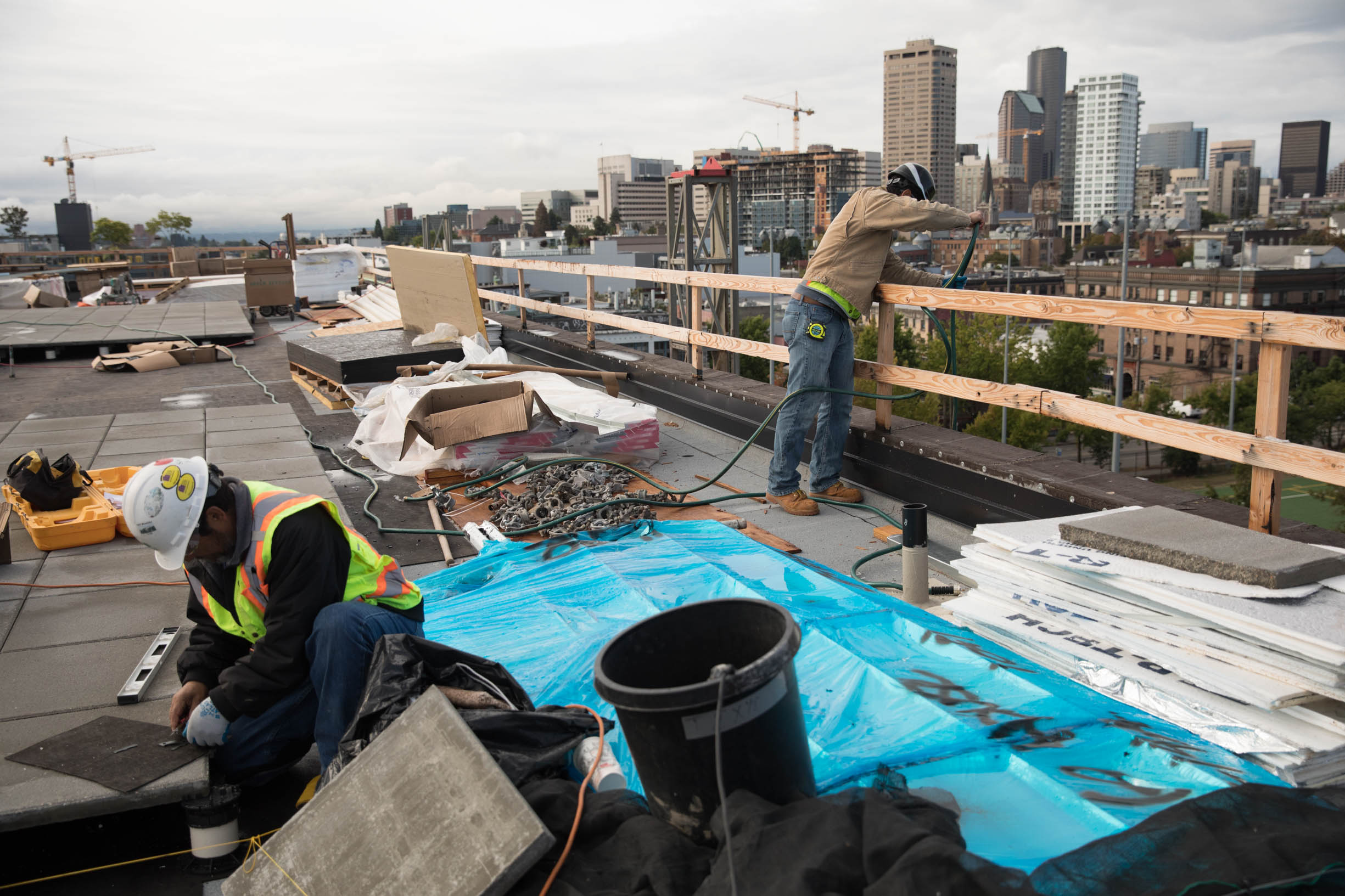 Construction workers install a wooden deck on the roof at the new Hugo House building, housed in its old location in Capitol Hill.

The Vietnam War, Ken Burns’ and Lynn Novick’s PBS masterpiece, offers fresh perspective on the origins of America’s Cold Civil War. The documentary spurred hope in some quarters that exploring the beginning of America’s Red-Blue strife might soothe the tensions of our culture wars. Cue President Donald Trump, pouring gasoline on the embers by urging people to boycott the NFL if any player kneels during the national anthem.

How did we arrive at this juncture, where professional football, long synonymous with red-blooded patriotism, has become a target of anger from the populist right? The president is a master at exploiting working-class resentments, but we are well-served to remember that he did not create them.

A hard kernel of truth fuels part of our nation’s discord, and it’s a truth I discovered nearly 16 years ago when I joined the U.S. Army: our dominant culture does not respect working-class skills.

This disrespect powers an extraordinary resentment responsible for much of our country’s political divide. The good news: it is possible, through a renewed appreciation for blue-collar professions, to understand and address the class front of the culture war even while race issues remain tragically beyond our reach.

I enlisted in the Army shortly after 9/11, inspired to serve our country. Mine was a classic fish-out-of-water tale; Jewish, suburban, recent Brown University grad suddenly arrives in Ft. Benning, Georgia — head shaved alongside a platoon of fellow airborne infantry recruits.

I was not good at soldiering. I downgraded the Ranger contract I had initially signed, quickly realizing that I had a hard ceiling on how much patriotism I was competent to display. Over the course of my three years in uniform, I deployed to the Afghanistan-Pakistan border, broke my jaw playing football during physical training and earned a demotion for falling asleep on guard. That infraction, my captain told me, had seen soldiers executed as recently as the Korean War. A fellow paratrooper joked that I “fell out of more runs than airplanes.”

What the Army does is very hard, and I don’t just mean combat. The military is dedicated to meeting tough objectives. Troops wake up before dawn and work with their hands and minds to solve real challenges, from conducting massive convoy operations to maintaining millions of dollars of equipment. Excelling at being a soldier, sailor, airman or Marine demands uncommon skills.

Yet, many military and veteran families are right to believe that America’s dominant culture does not value the kind of blue-collar work exemplified by the military: complex problem-solving applied to real-world challenges, rather than virtual ones. Yes, much lip service is paid to these skills, but how many politicians encourage Americans — or their own children — to follow their dreams, even if those dreams don’t include a four-year degree and an office job?

Elite culture valorizes the four-year degree as the bare minimum acceptable education level. This is true despite the fact that many professionals – registered nurses and plumbers, for example – don’t require a bachelor’s, and still earn more than many white-collar employees, not to mention their gig-sector counterparts.

Only six percent of American high school students, however, are enrolled in a vocational course of study, according to a 2013 Department of Education report.

One glance at Seattle’s skyline shows how poorly this state of affairs aligns with economic reality. We are the “crane capital of America,” so it should be no surprise that construction ranks among the fastest-growing job markets in the region. And yet, few civic leaders outside of organized labor encourage young people — neither through rhetoric nor policy – to pursue a course of study that prepares them for these opportunities.

Fortunately, many actors — foreign and domestic, urban and rural — increasingly recognize that this is misguided. Germany, which has managed globalization better than most, maintains a dual-training education system, and three-fifths of German high schoolers opt into the vocational track. West Virginia recently embarked on a dramatic experiment to grow its technical training options. And JPMorgan Chase CEO Jamie Dimon has made “middle-skills” development the centerpiece of his firm’s philanthropic efforts in cities like Chicago, investing hundreds of millions of dollars to connect community college curricula to the needs of the industry.

Closer to home, Edmonds School District 15 has partnered with the Lynnwood Rotary Club for 42 years, to offer students the “chance to construct an onsite house to industry standards.” It pairs this with classroom work that, according to The Everett Herald, “includes safety, tool use, math, nomenclature, blueprints and procedure.”

Why not replicate these types of partnerships and determine what works best for each community, all while more generally bolstering vocational-track opportunities?

But beyond specific programs lies a larger question of how we speak — and think — about different types of labor. Our rhetoric presumes an implicit superiority in work that requires an advanced degree, but where is it written that an office job has more value than a blue-collar position?

On more than one occasion in the Army did a sergeant lecture me, correctly, on the difference between “common sense” and “college sense.” My experience taught me that neither blue-collar nor white-collar labor is superior; both can be challenging and important, and different people have an aptitude for each. Our public discourse, however, barely allows for this reality.

It is hardly surprising that so many working-class Americans resent the dominant culture’s condescension about their talents. Leaders and the media should highlight the value of these skills through both policy and rhetoric. Explicitly honoring working-class skills can represent a culture war olive branch.

Valorizing blue-collar work in our public discourse won’t end our domestic conflict. But those angry at what they consider disrespect for the flag feel, more generally, disrespected by the culture. If we hope to come back together as a country, we require a new way of demonstrating respect where it is due.

Blue-collar professions and the military offer challenging, meaningful, well-paying work. We should embrace these professions, and create more pathways to them. It will be good for the economy, and it may defrost — a little — our half-century of Cold Civil War.

Disclaimer: In 2015-16, Cohen served as the Executive Director of the Veteran Jobs Mission, a JPMorgan Chase-led coalition of more than 230 companies dedicated to hiring veterans.