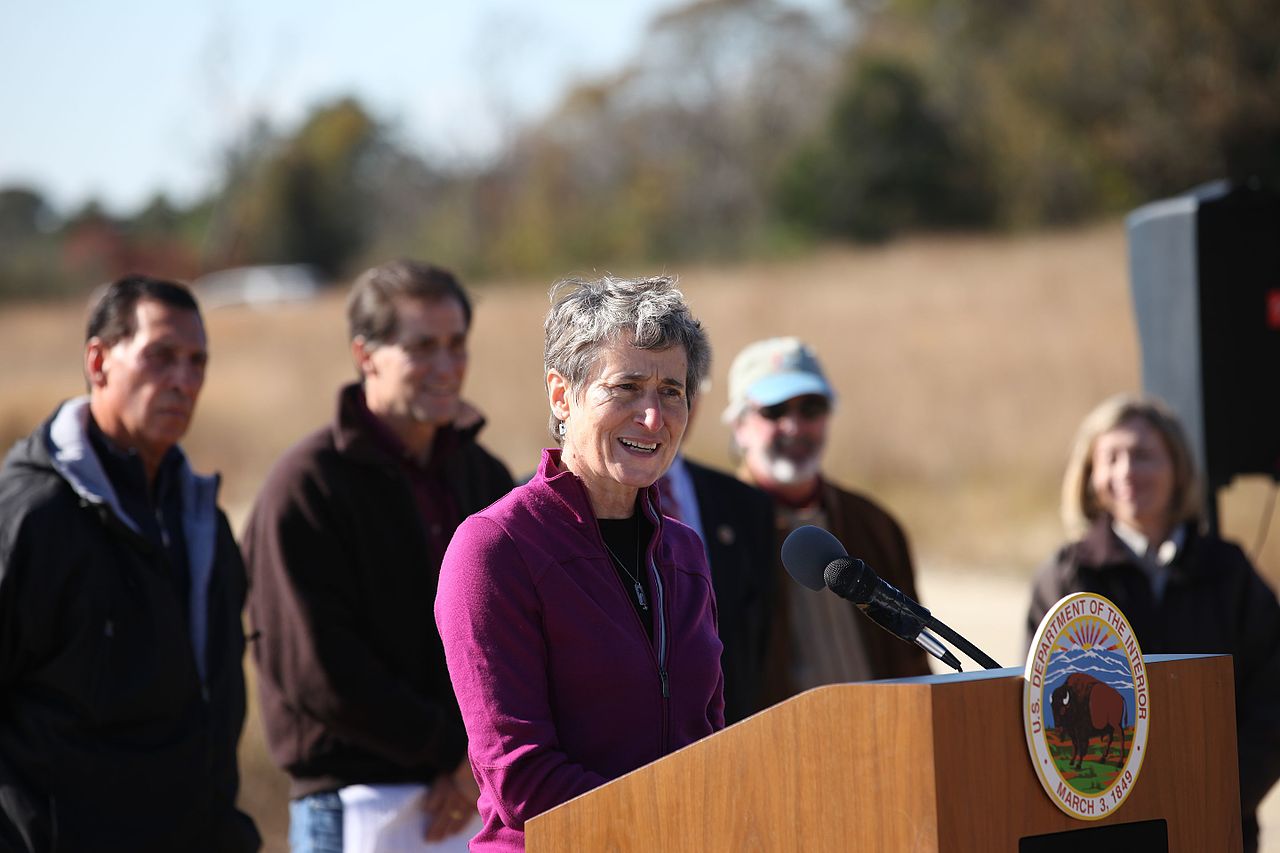 Sally Jewell was Interior secretary under President Barack Obama from April 2013 until his term ended in January 2017. At the department, the former CEO of Recreational Equipment Inc. undertook a “forward-looking reform agenda,” emphasizing science-based land and water conservation, renewable energy development on public land, and better relations with Native American tribal nations. High Country News recently caught up with Jewell as she prepared for a fellowship at the Institute of Politics at Harvard’s Kennedy School, where she will educate students in economics and environmental sustainability.

High Country News: Which of your achievements as Interior secretary are you most proud of?

Sally Jewell: We really built, I think, a strong nation-to-nation relationship with Indian Country across the board — Alaska Natives, American Indians, and we have a pathway to recognition for the first time with Native Hawaiians, which is the only Indigenous group in the United States that has not had any form of federal recognition.

That took the form of prioritizing settling lawsuits against the federal government for not upholding our trust and treaty responsibilities. In some cases these lawsuits have been going on for decades and costing the tribes a lot of money, and the federal government had not upheld its trust and treaty obligations. We also focused a lot on: What’s the pathway to the future for Native Americans, and where are we falling short? One of the areas we’re falling short is in tribal education. The Bureau of Indian Education just has been dealt a pretty tough hand in terms of educating Native youth, many of whom are disconnected — it’s a long commute to school on oftentimes very rough roads, sometimes it’s too far out, and they have to be in boarding schools. And the family situations, there are a variety — fully supportive families and families that struggle. All of that’s really tough, and we worked very hard to see what’s wrong with the way we’re structured; how do we make better use of the funding we do have to better serve tribal youth? And there was a big effort there. It’s unfinished business and it’s something I will continue to engage in in the future, but it’s an area I think we made good progress, at least in raising awareness, getting support from Congress, getting additional funding.

Another area where I feel really good about our term was in engaging the next generation broadly. Recognizing that as time marches on and we have new technologies available to us, we see — and there’s been a fair amount of research on this — the growing disconnect between children and nature and in general the great outdoors. We can’t expect future generations to care for these places that we so uniquely have in the U.S. if we don’t introduce them and say, “Hey, these are your public lands, you belong here.” And that’s particularly true for urban youth and youth of color who have not felt welcome, or for whom the outdoors has represented a scary place for a variety of historical reasons. And so we worked hard on doing that and creating this continuum which starts with play — just let kids play unstructured outdoors. Play, then learn, serve, work. We got 100,000 young people working on public land. And we had to raise private money to do that because we didn’t have sufficient money in the federal budget. But I think for all the federal land-management agencies, Youth Conservation Corps crews are very much on their radar and that will continue.

HCN: It looks like the Obama-era outreach to tribes is already starting to erode. The Land Buy-Back Program is not going to be continued after funds from the Cobell Settlement are disbursed. James Cason, the associate deputy secretary for the Bureau of Indian Affairs, has suggested the funds be distributed to fewer tribes, especially those with cheap land in rural areas.

SJ: The settlements we did make with tribes, over 100 settlements, those are done and the money is out the door, the water rights settlements we did with tribes, we did a record number, those are out the door and that helps bring certainty to not only tribes but also farmers and ranchers and others, municipalities that depend on that shared water, so I know that tribes are stronger as a result of the time President Obama was in office, and I think that their voice and solidarity has increased during that time. They’ve been around for a very long time, they’ve been dealing with the government a very long time, and it’s fair to say they’ve had their ups and downs, mostly downs. So they’re not going to go anywhere and they’re going to continue to stay engaged and they will hold this government accountable as they should. Secretary Zinke talked about being an adopted son of the Assiniboine Sioux and the Fort Peck reservation. I hope he lives up to that.

HCN: What do you make of the claims that all parties weren’t heard in the designation of Bears Ears National Monument?

SJ: I think that’s nonsense. All parties were heard. We worked very hard, for the entire four years I was there, with Congress and Utah Rep. Rob Bishop’s office on his public lands initiative. And there were many, many players that spent thousands of hours. Congressman Bishop likes to, I’ll say, brag, that he held over 1,000 meetings on the public lands initiative. That was not wasted. We heard many of those comments from his staff as we worked with them on drafting the bill. He talked to me about it in 2013, but he didn’t drop the bill until I was actually visiting the Bears Ears area in Utah and meeting with three county commissioners and tribal members that were pro- and con- monument designation, and when he did drop the bill he changed the language. But there was a tremendous amount (of public input) between the meetings that he held, the meetings that we held, and the four-day visit that I had down there, which was the largest public meeting with, I think, 1,500 or so people, so to say voices weren’t heard is not true. I think that what Rep. Bishop would have preferred is that the voices of a few dominate the voices of the many. And the fact is these are federal public lands, they belong to all Americans, and the voices of the many are appropriate with due respect to people in the local community who we did hear, and whose concerns were addressed in the language of the proclamation when we felt our only choice to protect this was to do a monument because the legislation wasn’t going anywhere.

HCN: REI is pledging to oppose changes to national monuments. Patagonia launched a major ad campaign to support public lands. How effective can outdoor recreation companies be as a political force?

SJ: I think that this whole monuments review has awoken the outdoor recreation industry in recognizing that if you’re not at the table, you’re on the menu. Outdoor recreation as an industry is almost as big as automobiles, automobile parts and pharmaceuticals combined. For the entire U.S., it’s $887 billion in consumer spending, $65 billion in federal tax revenue, so when my successor says oil and gas from the Department of Interior generates $12 billion in revenue to the Department of Treasury, OK, that’s great, but it’s a small fraction of what taxes are paid by people enjoying outdoor recreation and tourism; $59 billion on top of that in state and local tax revenues, 7.6 million direct jobs. That’s more than all of the other industries combined that use public lands for other purposes, and it’s not that those other purposes aren’t important, but outdoor recreation and tourism is a very legitimate use of federal public lands, and the industry is finding its voice and making sure people are aware of that.

HCN: What are you expecting to teach at the Kennedy School, and where are you going to go from there?

SJ: I’ve chunked out eight to nine sessions that will address each one of the various aspects that I feel are important in having that economically successful and environmentally sustainable future that I think we all want to leave to our children. And the overarching theme is my favorite proverb — I did not invent it, wish I had — “We don’t inherit the Earth from our ancestors. We borrow it from our children.” And so how do you create an environment — economic and natural and cultural and historical — that honors the fact you’re handing this over to the next generation and you want to be proud of what you give them?

If you’ve got people that aren’t convinced climate change is real, what needs to be done to help them understand? They may be skeptical of the science, but if you bring it home to them, to where they understand it, you’ve got a different picture. So all of that stuff is important, and I’ll be practicing at Harvard and putting it to use in some way in the next chapter, whatever that might be.

I’ll be staying in the West. Other than three more months in the East, I’m a Westerner.

Brian Calvert is the Editor-in-Chief of High Country News.