Nostalgia: Remembering the Sonics on their 50th anniversary 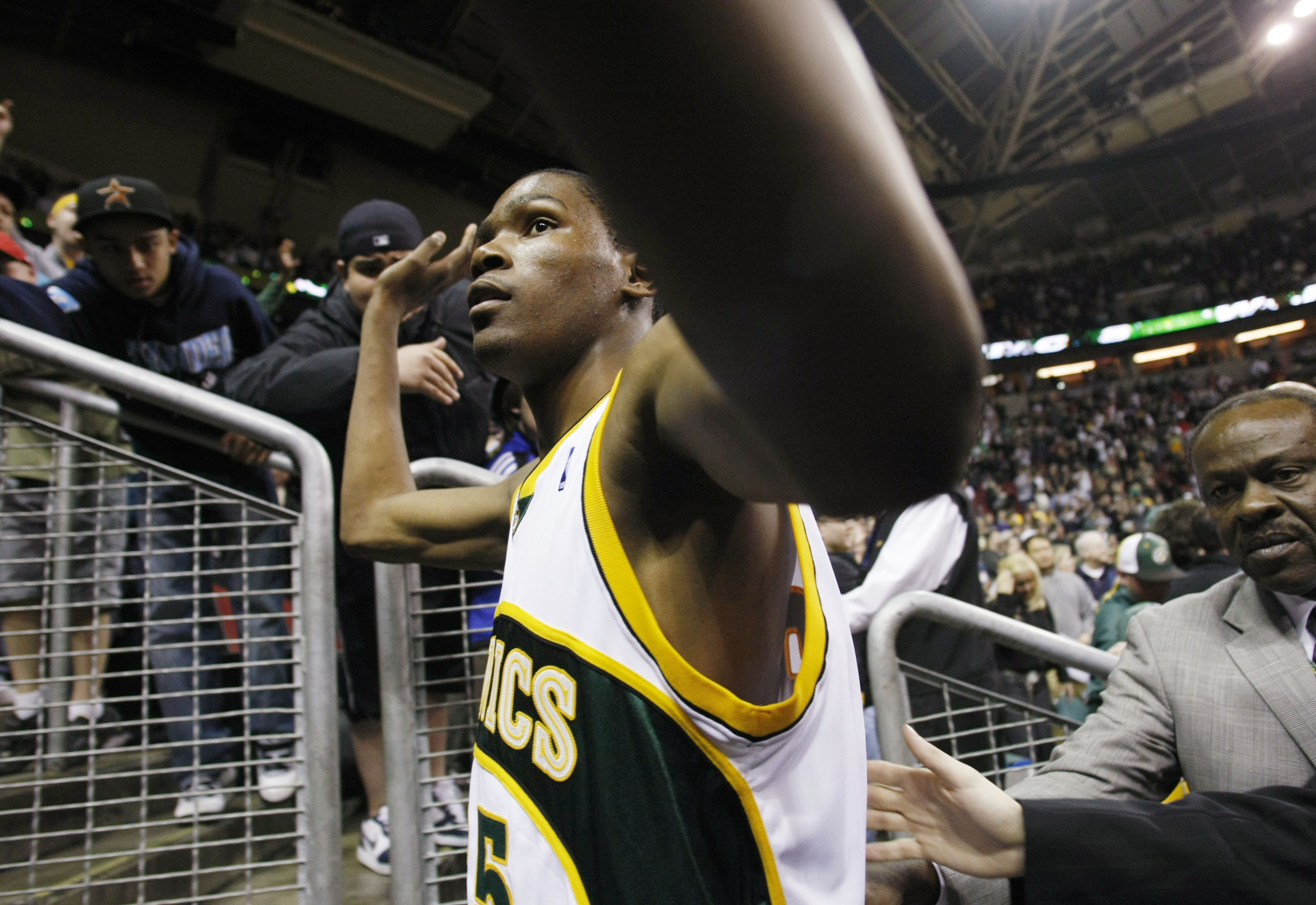 After the Seattle SuperSonics' final game, Kevin Durant reaches up to the fans at KeyArena.

Mike Glover, a Seattle P-I sports writer, had suspected a loss was coming the morning before the game. “[The Sonics] come into the Cow Palace [in San Francisco] tonight, hastily tied together with a shoestring, some adhesive tape and with a terribly green look – not just their uniforms either – that stamps them as decided underdogs in the NBA’s gala 1967-68 season opener,” Glover wrote.

He also wrote it would take a big effort for the team just to stay in that first game. No one, however, could have imagined then that the franchise, after winning a championship just 12 years later, would find it impossible to even stay in National Basketball Association.

But the Sonics at 50 are non-existent, a historic memory with only hopes for getting back in the game.

The team struggled all that first season, finishing with a record of 23-59, second worst in the league. Seattle’s Walt Hazzard finished as the NBA’s seventh leading scorer with an average of 23.9 points per game and represented Seattle at the All-Star Game but was traded for Lenny Wilkens. Still a revered figure around Seattle today, Wilkens went on to coach the team to the NBA championship in 1979 with a fourth-quarter comeback win over the Washington Bullets.

In this audio, former Sonics writers Glenn Nelson and Jim Moore talk about their days covering the Sonics, Bob Blackburn (the voice of the Sonics) and their favorite players.

In 1986, Seattle made NBA history once again – albeit, unintentionally. The Coliseum became the site of the only NBA game ever canceled due to rain: Water was leaking through the arena roof and dripping onto the court.

Nearly a decade later, the Coliseum was rebuilt, bringing it up to NBA standards of the day and, with the sale of naming rights, the designation as KeyArena. It was their home until their still-lamented demise in 2008.

Clay Bennett, the team’s owner, moved the team to Oklahoma City after having spoken glowingly about its future here as he purchased the Sonics from an investment group led by Starbucks’ Howard Schultz for $350 million. Schultz’s investment group had bought the Sonics and their sister team, Seattle Storm, from owner Barry Ackerley 2001. Steve Kelley, a Times columnist, predicted Shultz would be the “cup o’ Joe” the Sonics needed.

On April 13, 2008 the Sonics played their final home game in Seattle before the move to Oklahoma.  “The uncertainty could be sliced with a butter knife … yet the Sonics faithful seemed to ignore the painful issues surrounding their franchise,” Seattle P-I writer Gary Washburn wrote at the time. “Instead, for one night at least, they brought back the glory years.”

At the time Kelley, finishing out a five-part “Stages of Grief” column, wrote about such Sonics stars as Gary Payton, Shawn Kemp Dale Ellis, Detlet Schrempf and Ray Allen: “This might – might – be the final home game in Seattle Sonics history. But instead of fretting over the present, let’s celebrate the past.”

The team, which finished with three more losses than even the first Sonics team suffered, came from behind to win what remains the final home game in Sonics history.

Alex Cnossen is a Northwest native and has worked for several local publications, including KOMO, KIRO and KING-TV. He grew up in Portland and loves to run and write. Follow him on Twitter @CnossenAlex. You can also keep in touch via email at alex.cnossen@gmail.com.