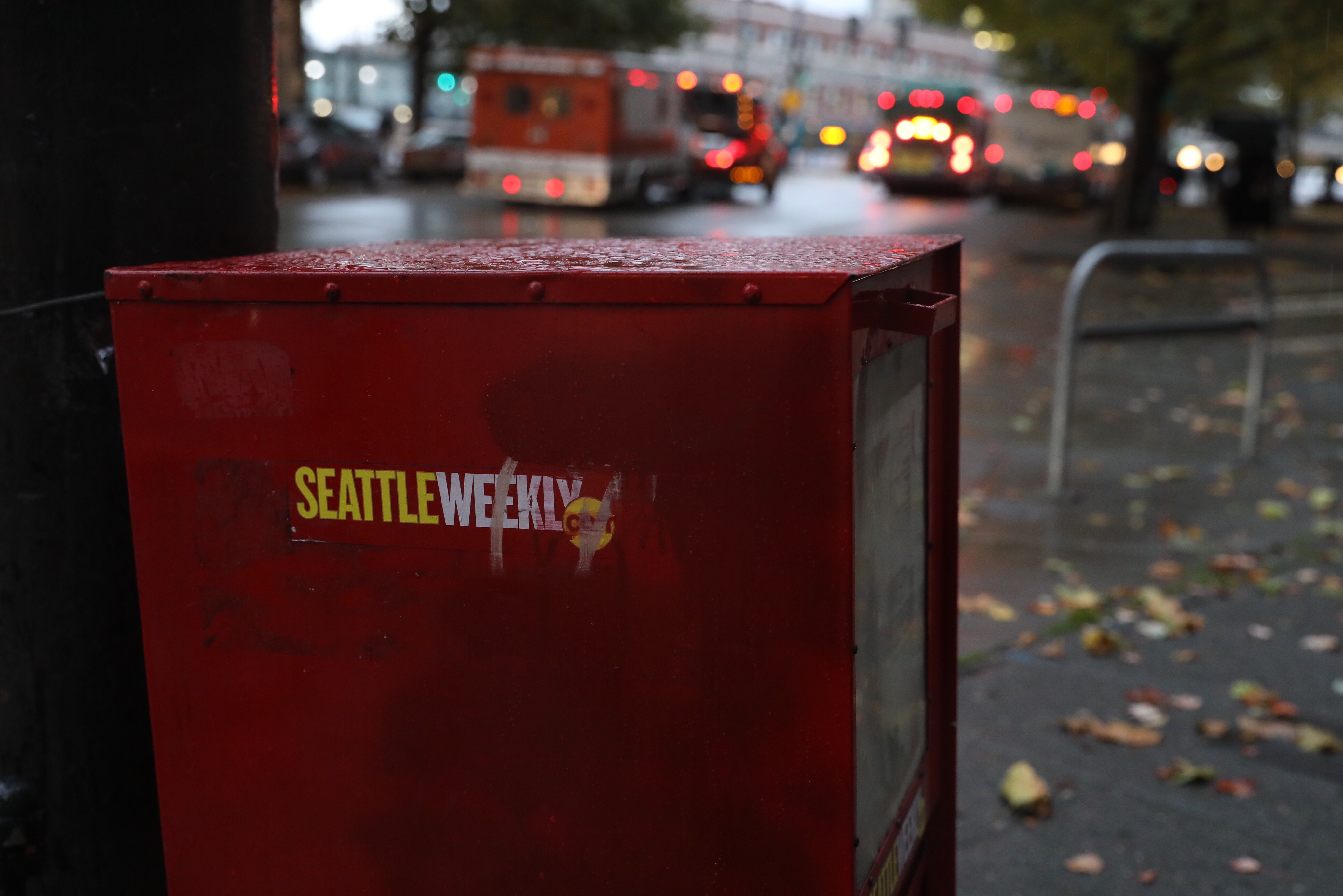 Last August, the publisher of the Seattle Weekly approached the newspaper's editor-in-chief, Mark Baumgarten, and told him, "We've got to do something about the Weekly." The decline of revenue, which began after the dot-com bust of the early 2000s and accelerated with the Great Recession and the growth of the Internet, had caught up to the paper.

"We weren’t seeing a path forward as far as revenue went," Baumgarten said in an interview on Thursday.

The newspaper is not folding. But the changes will be dramatic, transforming it from an alt-weekly into what Baumgarten describes as a "community news weekly" — a product that will look less like what currently sits in the red boxes across town and more like the small papers in Kent, Bellevue and Renton. Come this Wednesday, gone will be the magazine-style covers, replaced instead by a broadsheet paper, with stories that begin beneath the masthead and continue inside.

Coverage will change as well. The Weekly's publisher, Sound Publishing, owns a network of 49 newspapers around the region, 17 of which are in King County (including Seattle Weekly). Under Baumgarten's leadership, the company will establish a "King County News Desk," based out of Bellevue where the 17 King County papers will share "production support, product development and [will] facilitate knowledge and content sharing."

"For that work, we need to bring Seattle Weekly into the fold of those other community weeklies," Baumgarten says.

As a result, Seattle Weekly will go down to an editorial staff of only three — an editor, a Seattle reporter and a King County reporter. There will be no offices, only co-working space and field work. Baumgarten declined to go into specifics about personnel, although he acknowledged that City Hall reporter Casey Jaywork, arts and comix writer Kelton Sears and arts director Jose Trujillo are all leaving. In a post on Twitter, news editor Dan Person said his last day with the paper will be Oct. 25.

Baumgarten will begin as the Weekly’s editor before moving into a more prominent role coordinating the coverage between papers.

He says there are opportunities for other staff members — both editorial and marketing — within the new system, although not everyone is interested. "This is a restructure and within that restructure there are new positions being created and old positions being shut down," he says. "In some cases we offered [Weekly employees] a new position in the new structure — some accepted and others didn’t."

Baumgarten acknowledges, "Certainly there is something lost here. Let there be no doubt."

The editorial team at the Weekly will be writing and reporting stories for Seattle Weekly. There will be more focus on the county, although the Weekly will still produce Seattle-specific content. Reporters will be in constant communication with the local reporters at the 16 other King County papers. The Weekly reporter will write the county-level stories and provide "factsheets" to the local reporters, the intention being the community news reporters can focus exclusively on their own cities and not duplicate county-level reporting.

Baumgarten used the recent debate around safe drug consumption sites as an example: the Weekly's county reporter may write about the King County Council's deliberations, while the satellite papers will write about the impact in each community, such as recent votes outlawing the sites in Bellevue, Renton, Kent and others. The papers will share the stories.

"We gain from the boots on the ground in these outlying communities and they gain from our coverage," he says.

Where the old Weekly published a single 3,000-4,000 word feature and two to three news stories, the new paper will publish five to six shorter news stories. The hope is the beefed up county coverage will produce more advertising revenue.

Baumgarten says he has been mulling over how to use Sound Publishing's broad reach to the Weekly's advantage over the last year, but the financial difficulties served as a "catalyst."

The Seattle Weekly was started by David Brewster in 1976 (Brewster is also the founder of Crosscut). The paper remained under local ownership until 1997 when it was sold to Stern Publishing, which ran, among other alt-weeklies, the Village Voice out of New York. Until the dot-com bust, the Weekly was very successful, with an Eastside edition, weekly papers that routinely topped 70 pages, a distribution near 100,000 and a news staff of around 25 writers and editors. In one year in the late 90s or early 2000s, recalls Crosscut columnist and former Weekly editor-in-chief Knute Berger, the paper made $1 million in profit through advertising.

But with the rise of internet advertising, the Weekly began to struggle, as did many newspapers. Unlike its competitor, The Stranger, which turned to ticket sales to supplement lost advertising revenues, the Weekly has never quite found its footing. The paper sold to the New Times in 2005. Sound Publishing purchased the alt-weekly in 2013.

The changes to Seattle Weekly come amid vast shifts in the media landscape and on the heels of news the LA Weekly is being sold with layoffs possible.

This story has been updated to include Dan Person's announcement on Twitter he is leaving.

Correction: A previous version of this story stated Seattle Weekly sold to the New Times in 2000. It was actually sold in 2005. Further, Jose Trujillo was the arts director, not arts editor.