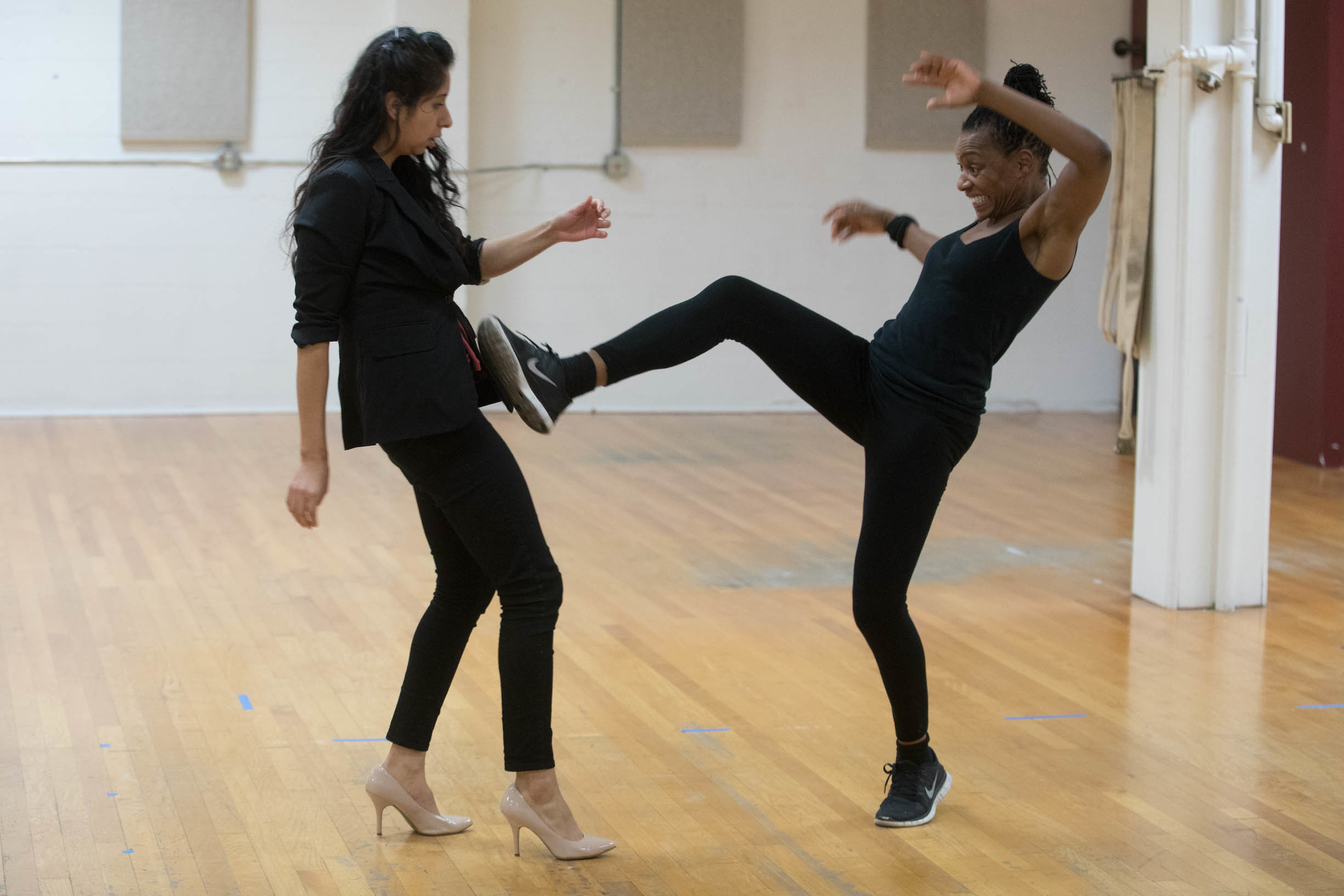 Yadira Duarte (left) and Nike Imoru (right) rehearse a fight sequence from "Coriolanus: Fight Like A Bitch" at Cornish College Of The Arts in Seattle. Photography by Matt Mills McKnight

Fierce, muscular warriors ram into and flip each other. They collapse on their adversaries’ backs, choking and pulling and gripping. They grunt and they growl, flashing toned biceps and abs, working up a sweat.

This is not happening in a war zone or a cage match, but in a downtown rehearsal hall in Seattle one recent rainy evening. And the buff fighters are not pro wrestlers in training, but cast members in a new, all-women production of William Shakespeare’s historical action drama, “Coriolanus.” (Subtitle: “Fight Like a Bitch.”)

“We started this rehearsal process with a full week of physical combat training,” Penick explains. “It was important to me as a choreographer to root the combat action of the play in how women’s bodies move and fight.”

This production of “Coriolanus” by Rebel Kat Theatre and the Perseverance Project, opening soon at 12th Avenue Arts, is not the first all-female version of a Shakespeare action drama Seattle has seen lately. In fact, it may be part of a rising trend.

In the Elizabeth Era, of course, men played all Shakespeare’s roles, including Ophelia and Juliet. But the ban on women actors was lifted centuries ago. Women have sporadically played Hamlet as early as the 18th century. But now a prime reason for flipping the tradition is a glaring disparity: Out of Shakespeare’s 981 characters, 826 are men. Only 155 are women — roughly 16%, according to Oxford University Press.

“Every woman in drama school receives some combat training.  And there are so many talented women in Seattle who love doing classical plays, they have few chances,” says Rosa Joshi, who will stage a co-ed version of the Bard’s “Henry V” at Oregon Shakespeare Festival next year. “When directing classics, I’ve often been working in a room full of men.”

Colleen Carey suggests that turnabout is fair play, at a time when the movie “Wonder Woman” is rocking the box office, and Hillary Clinton won the popular vote in her bid for the U.S. presidency.

“Gender boundaries are dissolving now,” Carey says. “And questions like, Can a woman be commander-in-chief? are being asked in our culture and reflected in theater. So where is the female King Lear? The female Hamlet? Those big roles have a full range of expression. And while men have more brute strength, there’s no reason to believe women are weaker warriors. Women are more flexible, more resilient and heal faster.  And there were female gladiators in Rome.”

The action-packed and politically resonant "Coriolanus," follows a general encouraged by his mother Volumnia and others to seek and attain political office. But his rashness and arrogant disdain for the masses and the democratic process leads to an ill-fated insurrection against Rome. It is his eventual undoing.

In this local production, “Coriolanus” gives women a chance to (literally) flex their muscles and to project the kind of political and social power still reserved mainly for men. When Rebel Kat Productions invited Penick to stage the show, she endeavored to add a new dimension for her gender-flipped, modern-dress makeover. Instead of women just masquerading as men, all the characters are presented as female — with pronouns changed accordingly.

“The story is the same, the verse is Shakespeare’s. But my main goal was to have the audience walk into the theater and recognize their own world,” Penick says. “This 'Coriolanus’ is happening here and now. These are women you’d recognize in suits in our own Senate, and in military fatigues in our military...You’ll see women in leadership positions [and] high-stakes negotiations between political vs. military actions and  [a debate] on who has the right to resources in a civilization with incredible economic disparity.”

A commanding actor classically trained in England, Nike Imoru clearly relishes filling the boots of such a flawed, complicated and timely figure as Coriolanus. Executing and “faking” stage fights is a risky, sometimes injurious business for anyone. But she savors the challenge and applauds Penick’s non-traditional approach.

“We’re doing a mix of combat, dance and expressive physical movement, instead of ye olde sword,” said Imoru, whose rehearsal regimen includes workouts at boxing gyms.  “It’s a fusion – impressionistic, expressionistic, not what we think of as swordplay. But we are really throwing each other around.”

Penick calls it “a new kind of stage violence. The weapons are not big swords but guns, knives and hand-to-hand combat. My approach as a choreographer is always to start with story and relationship. Because I’m starting from a place where a female character and actor moves authentically, they move more successfully. It’s more true to their natural impulses, and it keeps them safer.”

Another goal is conveying the psychological and social relationships and attitude in the play from a fresh, female perspective.

“This is where you feel the effects of our production the most,” stressed Penick. For instance, when interpreting the role of the general's wife Virgilia, “we looked a lot at what it means to be an army spouse in wartime, and what it takes to keep a smile and strong face when your spouse goes off to battle."

Many audience members, accustomed to all manner of experimental takes on Shakespeare, may quickly buy into an ancient/modern Rome occupied and run solely by women.  But how will longtime Shakespeare buffs respond to this thoughtfully crafted, but somewhat radical approach to “Coriolanus”?

“The more all-female work the better,” Joshi declared. “It’s creating opportunities and making people see the potential in it. And there’s no one right or wrong way to do Shakespeare.”

But it may be a leap too far for some, as suggested in the show’s ironic subtitle. Carey says it was inspired by an overheard conversation in which one male actor said to another, "You fight like a bitch, bro!”

That’s one sexist insult that the women behind “Coriolanus” hope to turn into a compliment.

If you go: “Coriolanus: Fight Like a Bitch” plays through Nov. 18 at 12th Avenue Arts.