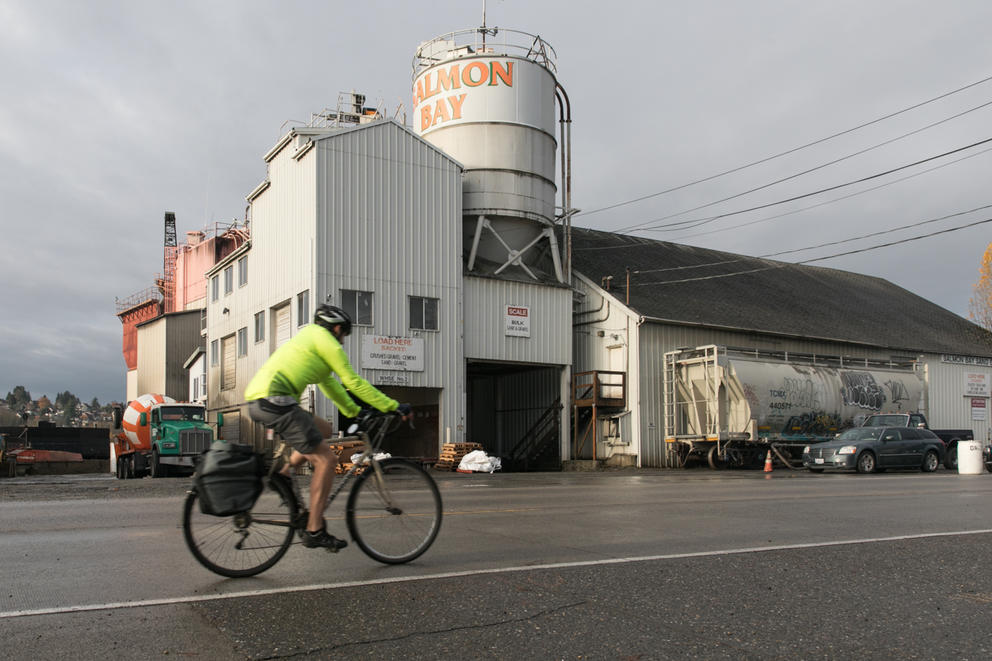 A biker crusies down Shilshole Avenue through Ballard's industrial area during a morning commute.

For years growth and the housing boom have been uprooting Ballard’s past: New colorful, boxy apartments and condos replace single-family bungalows and craftsman homes. Industry moves out, as more residents, craft breweries and trendy restaurants move in. Despite a thriving maritime industry in Ballard, which is surviving gentrification, some businesses along Ballard’s industrial corridor are feeling squeezed out.

As density increases, development flows toward Ballard’s industrial area, increasing the demand for land in the neighborhood. And more people — many relatively young and interested in active, urban lifestyles — have helped create greater tension around a decades-long battle over completion of the long-promised “missing link” in the Burke-Gilman Trail.

Some businesses and labor organizations believe bicyclists and industrial traffic can never mix safely along a 1.4 mile stretch of the trail through Ballard's business district, at least not on a route that the city is planning. Supporters of the trail disagree, saying the installation of a multi-use trail would make the corridor safer, benefiting everyone using the road including freight, cars, bikes runners and walkers.

The long-running debate appears to be reaching a key juncture, as the opposition goes before a hearing examiner beginning this week to argue against the Seattle Department of Transportation (SDOT) chosen route, which runs along Shilshole Avenue. The Ballard Coalition, a group of labor unions and businesses along Shilshole Avenue, is concerned about safety and believes the trail will negatively impact businesses.

It's a battle that has sometimes appeared close to settlement — and the long-delayed completion of a 27-mile mixed-use route running from Golden Gardens in Ballard to Bothell, where it connects to another regional trail.

The missing link route now at issue was hailed as a compromise when it was revealed during a press conference earlier this year. The proposed route begins where the current Burke-Gilman Trail leaves off near the Ballard Locks, the route would travel from NW 45th Street to NW Market Street, then turn south onto Shilshole Avenue NW and continue to NW 45th Street before reconnecting to the existing trail near the Ballard Bridge.

“It was an agreement announced by a whole bunch of stakeholders, including the maritime industry, Warren Aakervik [Ballard Oil owner], Eugene Wasserman (president of the North Seattle Industrial Association], and folks representing Ballard businesses," said Blake Trask, senior policy director with Cascade Bicycle Club. "A vast majority of folks in Ballard have gotten behind the plan. This is a compromise solution that goes so far beyond just being about bicycles.”

Supporters also point to the favorable comments on the project, which flooded SDOT’s email boxes with messages in favor of the chosen route. It's essentially the same route, along Shilshole Avenue NW, most cyclists and pedestrians already use informally as part of the missing link corridor. 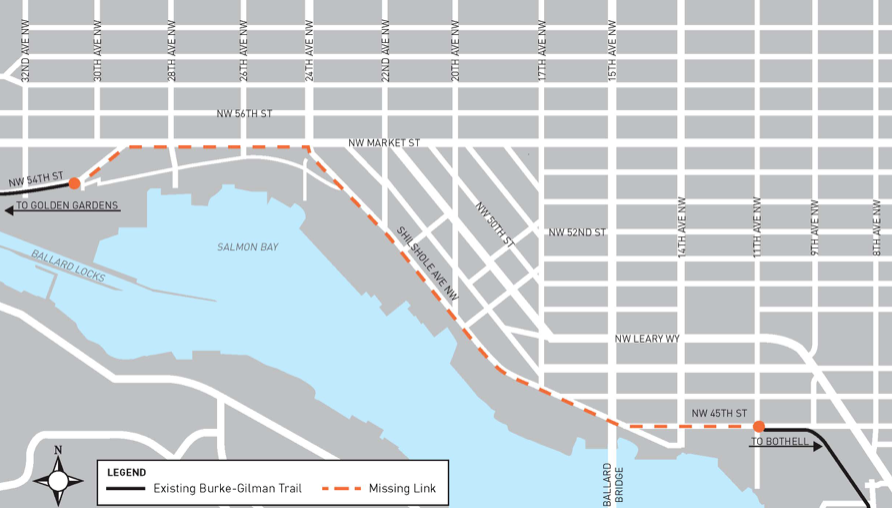 The proposed route of the final part of the Burke-Gilman Trail runs along Shilshole Avenue NW, where some businesses the effects. Credit: City of Seattle (Double-click to enlarge)

The Ballard Coalition, a group of labor unions and businesses along Shilshole Avenue, is concerned about safety and believes the trail will negatively impact businesses.

“The reality is, you can’t make that that street safe,” said Michael Walker, a business agent for Teamsters Union Local No. 174. “It‘s my personal belief the bike lobby has no regard for the safety of the bicyclists and no regard for the economic vitality of the businesses on Shilshole.”

The coalition argues that there's a better alternative: putting the final part of the trail on Leary Way two blocks to the northeast. The group concedes the Leary route would be "slightly longer" — about one-tenth of a mile, the coalition says — and would have more of an uphill climb in one direction, but says it would avoid disruptions to businesses that provide living-wage jobs.

Completing the missing link of the Burke-Gilman Trail and connecting the multi-use path has long been a priority for a larger number of residents of the neighborhood.

“This is a plan that goes beyond the trail, it’s going to enhance the streetscape, improve freight mobility. It will better organize the corridor,” Trask of the bike club said. “I really believe that this design will support retaining that critical maritime land use for a longer time than if we didn't have these investments.”

Members of the Ballard Coalition — which include the politically potent Martin Luther King, Jr. County Labor Council, Teamsters Local 174, Salmon Bay Sand & Gravel, North Seattle Industrial Association and CSR Marine — oppose using Shilshole. In legal papers, they say this route “brings users into direct conflict with industrial and maritime traffic,” and that will cause economic harm to the businesses adjacent to the trail.

“They want to destroy industry, because they want a nice little bike path by the water,” said Scott Anderson, co-owner of CSR Marine. “If someone gets killed out here, I’m going to get sued or the truck driver is going to get sued.”

Anderson says a multi-use trail along Shilshole Avenue would hinder the movement of large trucks entering and leaving his boat yard, and could ultimately drive him out of business.

“How can the city decide to do something without talking to the people who will be impacted the most?” Anderson asked, criticizing the city’s process for choosing the route.

Representatives point to an early version of the draft Environment Impact Statement (EIS) that shows the trail will have significant negative impacts on adjacent businesses. They assert that SDOT did not release those findings but instead requested the consultant producing the EIS to make changes. Those include switching some mentions of "damages" to "impacts" and removing “significant” several times from the report while adding that “business will adapt.”

One example they point to is a paragraph laying out the negative impacts for industry located within a half mile of the trail. They are dismayed about the disappearance — between the preliminary draft EIS and the final draft EIS — of sentences that read, “At these points, the congestion of pedestrian and bike travelers with industrial traffic may cause significant economic harm," and “This interference results in decreased profitability and in extreme cases, result in some industrial users going out of business."

Mafara Hobson, SDOT’s communications director, wrote in an email, “SDOT believes it complied with SEPA [the State Environmental Policy Act] and fully disclosed the potential adverse impacts of the project." Due to ongoing litigation, SDOT declined to comment further.

The Ballard Coalition supports moving the missing link segment to Market Street and Leary Avenue Northwest and constructing a cycle track, rather than a multi-use trail.

“The Market-Leary Cycle Track vision presents a pretty limited vision that doesn't work for people walking, jogging or families that are doing lots of activities together. Additionally, it's inconsistent with the rest of the Burke Gilman Trail,” says Trask with the Cascade Bicycle Club.

The bicycle advocacy group defends the safety of the proposed route, pointing to an almost six-month comprehensive design process done in 2017 through a design advisory committee, similar to the process that guided the Westlake Bikeway. Trask said, “The design really defines where people should be and how they should be operating in what is a complicated corridor.”

He says improvements will include better delineation of driveways; new traffic signals to space traffic flow and turning movements; and other environmental improvements for stormwater and safety. According to the city’s environmental impact statement, over 80 percent of comments expressing a route preference supported a route along Shilshole, while only 5 percent supported locating the route along Leary Avenue.

“An EIS is meant to identify the impacts of the project, not solve them. The design process is what is meant to address the impacts and make a better project for everyone,” Trask says. “Would you rather drive, having to pass people walking and biking, while cars pull out of 90 degree turns, or know exactly that the people are on a designated trail that is signalized?"

The coalition wonders whether the city's plan would undo some of what has made Ballard attractive. Nicole Grant, executive secretary of the county labor council, said in a statement this spring, "I’m a cyclist myself but I could not see putting a trail where it would jeopardize the livelihood of so many families."

A final decision is expected by the end of the year.