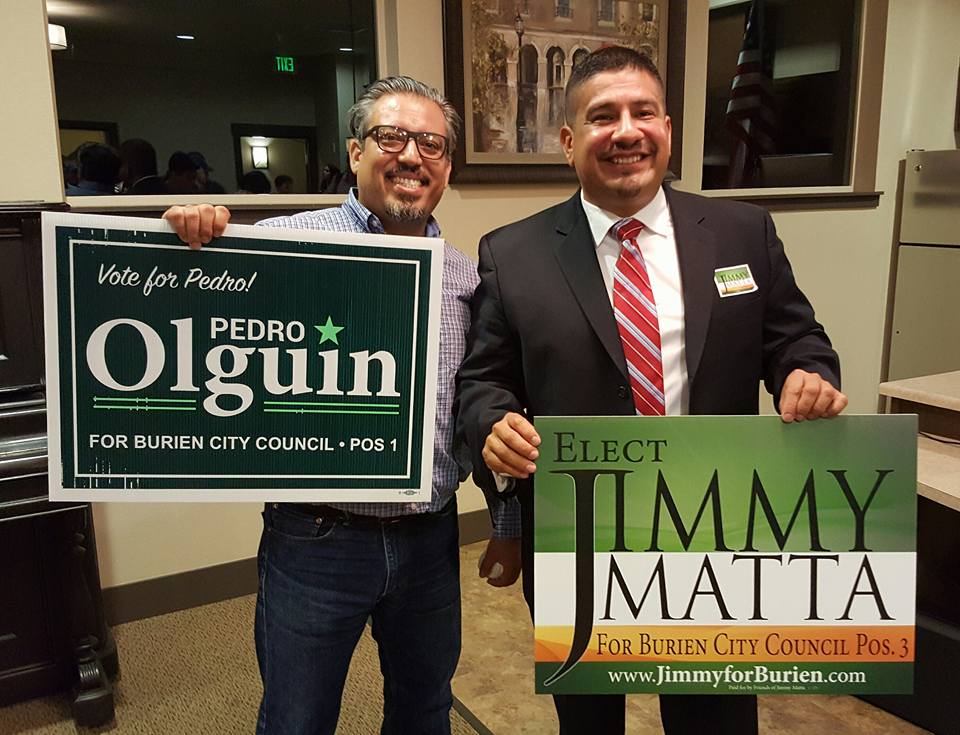 Ask almost anyone in Burien and they will likely tell you about the city’s growing pains, which are mostly centered around the issue of immigrant rights. Now after an especially nasty election, filled with back and forth arguments about racism and people moving into town, two men are poised to be the first Latino members on the City Council.

On a cloudy, rainy day inside a small coffee shop in Burien’s town square, Pedro Olguin and Jimmy Matta reflected on their landmark electoral victories. They didn't always believe they would win.

“I felt like statistically we were done and then we had that swing … and it just felt like, oh, maybe there is a possibility,” Olguin said, adding that before the election numbers started to turn in his favor last week, he had already begun writing an obituary for his campaign.

Olguin, 38, wears thick black glasses and has a black goatee and mustache sprinkled with gray. He is an organizing coordinator with Teamsters Local 117, a union that represents 16,500 workers across Washington state. He is the father of two young boys.

Matta, 41 — dark, cropped hair and a kid-like smile — is also a father. He has a 14-year-old daughter and a 21-year-old son. He works as a construction supervisor.

Both men said they were inspired to run for the City Council after the election of Donald Trump. “I’ve lived in this community for 20 years, I’ve never felt like an outsider,” Matta explained. “I felt like Burien was going in the right direction.” Then he witnessed a white man at Safeway yelling at a person of color: “That’s right, your president is gone, you’re going back home.” Matta’s own mother also experienced a similar kind of humiliation. She was wearing a Hillary Clinton T-shirt at work and someone warned her that she had better take it off because she, too, "was going home," he recalled.

“I told my kids, 'You know, I feel like running and telling these individuals they’re wrong, that America is different,'” Matta said. “So then my son and daughter go, 'Well, then run. You’ve always said if you really want to do something, then go do it.'”

The stakes in Burien were especially high due to a particularly nasty backdrop that pitted longtimers against immigrants. In a narrow 4-to-3 vote in January, the Burien City Council passed an ordinance that instructed city employees not to inquire about a resident’s immigration status. The legislation also prohibits employees of the city from collecting information about a resident’s religious affiliation.

Olguin knows the history of all of this well. At a contentious City Council meeting last fall, Olguin called whoever signed a Respect Washington sponsored petition "a racist."

Whether it was how votes went down in Virginia or here in Washington, where the election of Manka Dhingra enabled Democrats to take control of the state senate, establishing what some have referred to as the “blue wall,” or the Democratic control of the governorships and state legislatures along the West Coast, this election was considered by many to be a referendum on Trump.

In a recent piece, The New York Times even described a suburban rebellion against Trump. Locally, perhaps, nowhere was this more evident than in Burien, which sits just 10 miles south of Seattle. Although some may view the race in the suburb of 50,000 as representing a landslide victory for those who oppose Trump’s policies on immigration and other issues, the election kept many in suspense; one person on social media referred to the Burien race as “nail-biting." As of Tuesday, for example, Olguin was leading his competitor, Joel Manning, by only 237 votes. Matta was running ahead of challenger Debi Wagner by 353 votes. Two other candidates were also leading by relatively slim margins: Nancy Tosta and Krystal Marx.

Olguin grew up in Compton, just outside Los Angeles, California. As a young man growing up in a rough neighborhood, he admits to getting into some trouble. (He has a misdemeanor for the illegal possession of a firearm, for example.) But he said getting involved in politics was part of what turned his life around. His first inspiration to become politically active came in the '90s after California’s passage of Proposition 187, which required police, health care professionals and teachers to verify and report the immigration status of individuals. The California law was eventually ruled unconstitutional.

Olguin first moved to Burien in 2009. He said the atmosphere in the city has at times felt just as toxic as California in the '90s. At one point he considered filing a restraining order against a group that refers to itself as “Burien First, Burien Proud” because he was worried about his children's safety. The group supported City Council candidates opposed to the city's sanctuary status  — all of whom ended trailing as the final votes have been tallied.

Matta, the son of undocumented farmworkers from Guatemala, also experienced plenty of tense moments in the campaign. When knocking on doors, Matta came across a woman who said she believed there were too many Mexicans living in Burien. She also said they should all learn to speak English. (Burien is about 20 percent Latino.)

Still, Matta said he tried to keep things in perspective.

“I don’t believe that a lot of the stuff that is going on is racist. I do believe it’s fear of change,” Matta said. After the woman broke down crying, he told her: “You can rest assure that whenever you feel scared, or insecure, or you don’t understand anything about this community that doesn’t speak English, come knock on the door at the City Council meeting, I’ll be there to open it.” The confrontation ended with an embrace and the woman telling Matta that he had her vote.

On Sunday, the new council members were already being recognized at a busy Burien coffee shop, with a few people stopping by to offer a handshake, a congratulations or even an admission that they had voted for them.

And in spite of the campaign's "emotional rollercoaster," Olguin and Matta are convinced that now that the election is over, the Burien community can and should move on.

We need to “move forward and make sure that everybody is represented in this community,” Matta said.

Erin Grimm, 32, a local teacher at Highline Public Schools, agrees. She's grown anxious about the "inability to have dialogue."

“I feel like people are dehumanizing each other,” Grimm said. “We're all people.”

“What I want out of this election is for people to stop stereotyping each other. Respect each others' humanity regardless of how you vote.”

Now that the sanctuary debate is finished, Olguin and Matta hope that tackling various policies, which are significant to the community as a whole, will help push past any existing tensions.

“I feel confident that we’ll be able to pass real significant policies. And not just policies that are left-leaning, but policies that make sense for the community,” Olguin said.

“We have two different camps that are fighting for what the future looks like and somehow we have to find common ground, and I think we focus on the issues that matter to all of us.”

For both Olguin and Matta, those issues include helping ensure local youth escape the opioid drug epidemic and addressing rising rents and homelessness. Matta would also like to focus on supporting the small, minority-owned businesses that make Burien unique. “In my mind, if you can make a community self-sustaining, self-sufficient, they’re going to continue to flourish,” Matta said.

Said Matta: "It’s not the color of your skin or background. People are looking for someone who will listen and give them hope.”

To that end, Matta’s first item of business, he said, is “to hear from the people.”

The new City Council will be sworn in on December 18th.