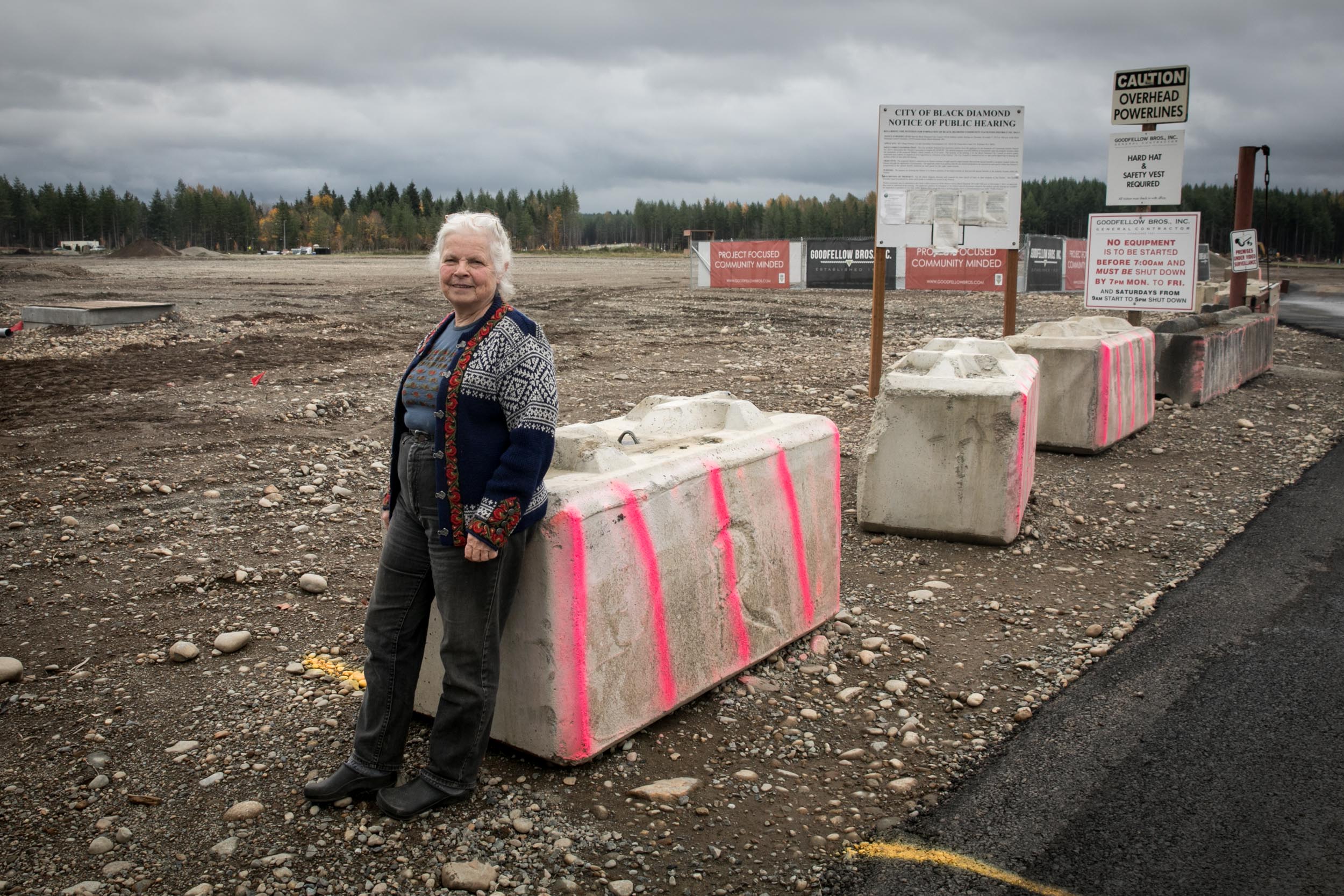 Incumbent Mayor Carol Benson easily retained her seat election night, earning almost double the votes of her opponent, Judy A. Baxley. All despite a chaotic year in city government and a recently filed lawsuit by Black Diamond’s City Council claiming the mayor was overstepping her authority.

Two new councilmembers, Erin Rose Stout and Melissa C. Oglesbee, will join Benson after both won open seats by wide margins. “I just really believe the voters of Black Diamond have heard our message and they want to get the work of the city done,”  Stout said. “They are done with the lack of governance that has been going on.”

Councilmember-elect Stout is ready to put the lawsuit filed by the previous council behind the city calling it “frivolous” and “a political maneuver.” “That council as it existed will cease to exist,” Stout said predicting the lawsuit will now disappear. “I don't think there will be a majority and minority and I think that is the way it should be."

The politics of the exurbs can often be messy. Take the case of Black Diamond, undergoing a major transformation as growth finally reaches the former coal mining town in east King County. With elections approaching and a potential recall of a council member looming, the debate over a massive development, which could more than triple the population, has turned the town’s politics into power struggle between the mayor and city council.

A slew of lawsuits and accusations continue to stack up including a charge that the mayor’s husband allegedly pulled a gun on a process server. In the case of Black Diamond, change seems to have brought political drama, even chaos, to this once quiet town.

The chaos began in 2016 after Councilmembers Brian Weber and Pat Pepper were ushered into office on a platform of reforming city hall, as a new mixed-use development project, Oakpointe, over twenty years in the making, was at last breaking ground on its first phase. They joined Councilmember Erika Morgan on the dais forming a majority of reformers.

The new council majority first restructured council rules in an attempt, both Morgan and Pepper say, to bring the public into the decision-making process for the development about to radically transform the town. Then they passed resolutions to rebid consultant contracts needed to manage and permit the massive development and hire a new city attorney.

The mayor, Carol Benson, then declared that the council had no contracting authority and refused to sign resolutions they passed. Instead, declaring the “council has no contracting authority.” Council members tried hiring a parliamentarian to help maintain order, but upon passage by a 3-2 vote of the council, the resolution to hire the parliamentarian was immediately ripped up by the mayor.

“The change in the rules was so the city would follow the democratic process instead of a top-down process,” Morgan says.  “We just wanted to make sure someone was watching the developer.” Pepper and Morgan felt the developer had a lot of influence over city hall.

Some residents welcomed the new development, containing over 6,000 new housing units and over one million square feet of retail space. It could more than triple the town’s current population of 4,100 and enormously expand the town’s tax base. Others still hoped there was a chance the town could remain unchanged. But many questioned whether the city’s infrastructure could handle such a big swell in the population, turning council meetings into a tinderbox ready to explode as Black Diamond’s city government debated the best way to shape the new development dominating the town’s business.

“They took over with sledge hammers,” says Councilmember Janie Edelman, part of the council minority. And sledgehammers weren’t the only tools involved. In one now-infamous meeting, nicknamed "gavelgate," the public watched Mayor Benson wrestle Councilmember Morgan for control over the gavel.

A tense meeting last summer meeting ended with a 3-2 decision by the council to hire the high-powered lawyer Anne Bremner to take legal action against the mayor. The council majority thought if the judge ruled in the council’s favor, Benson would be forced to abide by procedural guidelines or be held in contempt of court. The suit also demands Benson repay $200,000 in legal fees they say the council never authorized.

“There’s a real misconception in our city about what a strong mayor really is: It’s equal but different power,” says Councilmember Brian Weber. “Residents have this preconceived notion that the mayor has all the power and we (council members) have to do what the mayor says. No we don’t.”

The biggest decisions coming before the current council and the next post-election council will all deal with the future development.

Morgan said the lawsuit was about protecting the town from development that could harm the city and land, and from future lawsuits once the developer is long gone.

During past negotiations with a prior mayor, the developer Oakpointe — formerly Yarrow Bay — had inserted itself into city planning, fully funding staff and consultants in a department created specifically to manage two development agreements the company negotiated with the city.

“So, we have the fox guarding the hen house,” Morgan says about the arrangement.

According to Morgan and Weber, Oakpointe insisted on dictating consultants the city used for the massive project. Disagreeing with her fellow council members, Edelman said the hiring and firing was done by the mayor and city staff.

Jim Doherty, a legal expert at the Municipal Research and Services Center, a nonprofit that advises cities on policies and legal matters, says this arrangement between the city and the developer was not unusual in small towns that lacked the resources needed to manage large development projects.

“It’s certainly wise to look carefully, and pick your own consultants, making sure they provide good advice,” he advises. According to Morgan, that’s exactly what the council majority attempted to do when they began to question decisions made by city staff and the mayor.

“I think the mayor is looking for a council that will say yes right away, and she doesn't have that,” Pepper says. Edelman says the council simply gets a yes or no vote on contracts the mayor brings before them. “The mayor’s responsibility is to put forth her recommendations and the council confirms. It’s not the council's’ job to rewrite contracts, or change the way policy is set,” she insists.

According to Doherty, the legal expert at the Municipal Research and Services Center, city councils do have contracting authority.

“In general the council establishes policies, and the mayor is the executive that carries out the policies approved by the council,” he explains.

But statutes could be written more clearly, Doherty adds, so “there's lots of room for people to argue if people want to argue.”

A chance to reshape the city

Most people avoid a court summons simply by hiding in their house, refusing to open the door. But— according to Bremner, the Seattle attorney handling the suit council members filed against Benson — when a processing agent attempted to serve a summons to Mayor Benson, the agent was instead greeted with a gun by a man later identified as the mayor’s husband,

Though Benson had warning this lawsuit was coming, since she was present at the meeting the council members voted to file the suit, she still hid in her office at city hall when the processing agent first attempted to serve the court documents. About a week later, Benson said the agent tried again to serve the summons at her home after dark.

Both Benson and her husband, Gary Farmer, who is the one accused of threatening the processing agent with a gun, deny the accusations.

“He just came to the door and Gary told him to get out of here,” Benson says about the encounter. She says the agent then threw papers at Farmer who responded by throwing them back.

“[The agent] was afraid and took off running,” her husband adds.

Rebutting the lawsuit by council members, Benson maintains she has been following the correct process at meetings, saying “I’ve been following the advice of the city attorney.” She says three different lawyers gave her the same advice and predicted the lawsuit would be thrown out, claiming it wasn’t filed legally.

Edelman, who voted against filing the lawsuit and part of the council minority, calls the suit baseless. “It's a frivolous lawsuit, it’s already costing taxpayers tens of thousands of dollars,” said Edelman. “It's an election ploy that her opposition has chosen to take.”

In an uncommon move, after the suit was filed against Mayor Benson by the city council, Oakpointe petitioned the court to be added as a defendant in the suit. “Oakpointe has a substantial interest in the subject of this lawsuit that will unquestionably impair Oakpointe’s ability to protect its interests, and the existing parties do not adequately represent Oakpointe’s interests,” the company declared in court documents.

Through all this turmoil, lawsuits continue to stack up, with Weber, Morgan and Pepper, the council majority, being personally sued by CCD Black Diamond Partners LLC, an affiliate of the Kirkland-based Oakpointe, the developer working in Black Diamond. The developer accuses the council members of violating the Open Public Meetings Act more than 135 times and acting in concert with each other.

“All the majority members have been threatened and intimidation tactics have been tried and lawsuits have been filed,” Pepper says. “If councilmembers are so unprotected that they can be sued like this, I think it should give us all pause.”

Pepper is also fighting to save her seat in a potential recall vote. Led by the wife of a former council member who lost his seat to Pepper, the recall suit claims Pepper has “usurped the authority of the mayor on multiple occasions,” and “conspired with other City council members to defeat a quorum.”

On Tueday, voters in Black Diamond will have a chance to reshape the council and who will be charged with decisions over the new development. Benson, Morgan and Weber’s seats are all up for re-election. Only Benson has chosen to defend her seat, challenged by Judy Baxley, running as a city reformer.

Weber and Morgan said the current situation was not the reason both decided against running for re-election, but  Weber does worry that all the lawsuits could be deterring residents from stepping up and serving their community.

“Who wants to run with the fear they could get sued if they make a decision that somebody doesn't like?” Weber said. “To me that really impedes the democratic process, when you want to step up and serve your community but there is a whole lawsuit threat.”