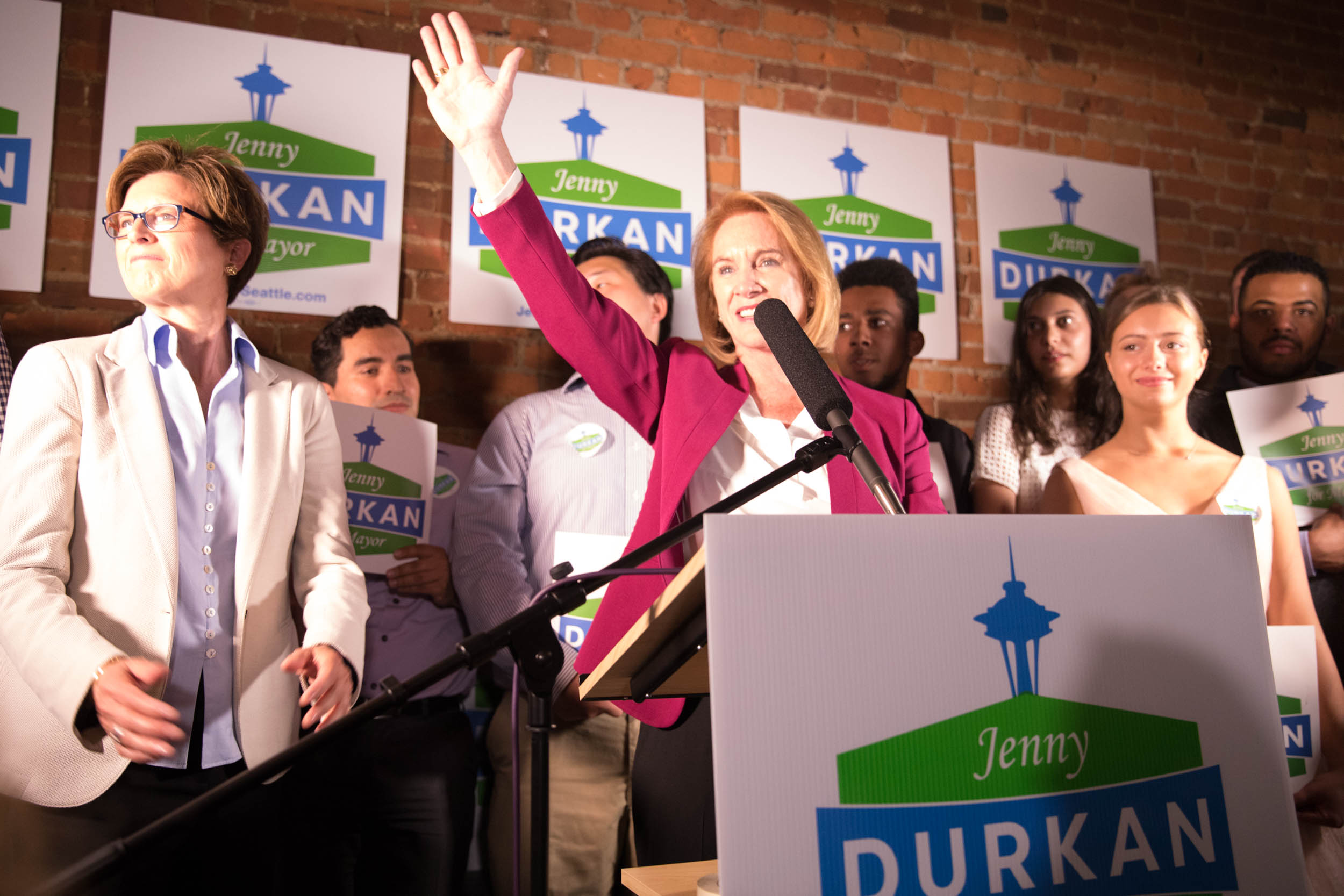 Seattle has now elected two women mayors — with a gap of nearly a century between their elections. It’s an interval that has served as a scar on a city that thinks of itself as a progressive leader.

Bertha Knight Landes was elected in 1926, breaking the “glass ceiling” in a town dominated by men. She was the first female mayor of a major American city. After a single two-year term, Landes was defeated for re-election and the durable glass ceiling was reinstalled.

Despite the passage of time since Landes’ election, there are some remarkable similarities between the political positions and the challenges faced by the two ceiling breakers.

It’s no surprise that Jenny Durkan identifies with Landes. In her victory speech Nov. 7, Durkan repeatedly evoked the former mayor, the challenges she faced and Durkan’s own position operating in a sexist status quo. “You know, I’ve been thinking a lot about Bertha and that glass ceiling,” she said. “And when we had the year of the woman — you know, they gave us a year — I remember going to a conference and someone [said], ‘You know the first people through that glass ceiling, they get cut.’ Well, did you notice they named this big drill after Bertha? Ninety-four years later, it was all Bertha’s fault when it didn’t happen [right].

“Just imagine what they are going to blame on me in 94 years!”

Durkan’s bittersweet comments suggest that despite her breakthrough victory, the bigger challenges for women trying to be viewed fairly aren’t going away soon.

To be sure, Seattle has changed in the years between Landes and Durkan. Women are a large majority on the city council and have been major players on that body for decades now. Before she was mayor, Landes was one of the first two women elected to the city council, a previous layer of glass she helped to break.

The Seattle electorate in 2017 seemed determined to have a woman mayor, no matter what, in reaction to the rise of Donald Trump, and in response to the allegations of sexual abuse that finally forced the resignation of mayor Ed Murray. The top four finishers in the August mayoral primary were women, with experienced male candidates trailing behind. Still, it has taken the extraordinary circumstances of today to break the woman-mayor drought.

Civic issues for both Landes and Durkan have some commonalities. Police reform for one. Durkan, as U.S. attorney for Western Washington, was a leader on the consent decree to reform the Seattle Police Department’s use of force and will be facing police contracts and accountability issues. Landes was determined to root out police graft and demanded that 100 officers be fired. Durkan has said one of her priorities is transportation. Landes was faced with wading into a mess with the municipal streetcar system. Social welfare is another. Durkan faces a homelessness crisis, and Landes was a force for improvements in social welfare.

Durkan and Landes’ campaigns often sounded like they had similar scripts. Both candidates have been cast as pragmatic progressives. Durkan’s supporters have touted her as a “progressive who gets things done.” Landes was described as a “practical idealist.”

For women, there is — and was — strong political pressure to balance their identity within male-dominated politics. In Landes’ time Seattle was considered “wide open” in terms of gambling, prostitution and violations of Prohibition, which fueled longstanding corrupt political and police practices. Landes’ rise, in fact, came amid outrage over revelations in the trial Seattle’s rum-running kingpin, Roy Olmstead, a former Seattle cop who ran a widespread and successful criminal enterprise. Seattle was still in the throes of a frontier economy, too: Tens of thousands of men — seasonal Alaska, maritime and other workers — flooded the city where they patronized vice dens and were lucratively fleeced by the locals. It was a huge piece of the city’s economy and had strong business backing.

Landes talked about her skills as a municipal “housekeeper,” likening the city to “a big household.” She said, “Just like children’s shoes, street cars wear out. Parks and streets have to be kept clean.” A woman like Landes was just what the city needed, but her cleaning skills were resisted (though her language perhaps lives on when we talk about “sweeping” homeless encampments). She tried to enforce Prohibition and clean up the police force, but her broom was successfully resisted.

While talking up a homemaker’s skills, she also had to appeal to a Western port town with one or both feet firmly planted in vice. City University of New York’s Tiffany Lewis, in a paper on Landes’ political rhetoric, concludes she had to establish that she could be effective within the “masculine sphere” of Western boomtown politics. “I threaten to shoot on sight, without benefit of clergy, anyone calling me mayoress instead of mayor,” Landes once said. She let it be known there was a new “sheriff” in town and demanded due respect.

Durkan also touts gender-balancing qualities in her approach to running the city. In her victory remarks on election night, she extolled the virtues of toughness and compassion: “[M]y mom — Lolly Durkan — did not raise her eight kids to be meek. She raised us to be fierce — and gentle. And I tell ya, everywhere I went in this campaign — I knew that was Seattle. Because we stand fiercely for what we believe in. But when we see our neighbors hurting we will also be gentle.”

“Fierce and gentle” is a battle cry that seems like an attempt to reassure across gender lines.

Landes was defeated for re-election by a relatively unknown businessman, Frank Edwards, who had some Trump-like qualities: He was a political novice who was backed by big (and mysterious) money. He ran an innovative media campaign using radio and commercials at movie theaters aimed to get Seattle’s working class voters to oppose a college-educated woman from North Seattle running the city and denying them their whiskey after a hard day’s labor. Also disaffected during Landes’ term: municipal employees who did not like her government cost cutting.

Sandra Haarsager, a Landes biographer, wrote that Edwards bashed Landes for emasculating Seattle, the city having “lost its ‘virility’ under ‘petticoat rule’.” William Severyns, the police chief Landes fired for failing to clean up the department, believed she was politically “shrewd” but also belittled her type of reform politics as unbefitting muscular cities where males ruled in the urban rough-and-tumble. “Seattle, with its reform administration, is not the only American city ruled by a lady,” he wrote during her tenure. “Our mayor happens to wear skirts. Some other lady mayors are poorly disguised in pants.”

A major difference between Landes and Durkan is that Landes was a political outsider. Women had only recently gotten the vote, her base was a relatively new constituency seeking fundamental civic change based on early 20th-century progressivism — empowering middle-class white women, protecting families and improving the city’s moral climate. A homemaker knew how to make an environment that nurtured family.

Seattle had battled for decades between being a pro-vice or anti-vice town, and Prohibition had proved a windfall for the payoff system that greased municipal politics and lined everyone’s pockets, from the city council and mayor’s office to the police and judges. The system was designed to allow the city largely to flourish on the exploitation of women. It was not an easy system to overthrow, as Landes discovered. In fact, parts of the extensive payoff system were still in place into the 1970s.

Durkan enters City Hall not as an outsider, but an insider. She is from a longtime, well-connected political family and backed by big business. Her opposition is largely in the activist community on her political left.

Durkan says she wants Seattle to be a “place where people are united. Where people know they have a place.” Simple as that sounds, it’s a tall order given the challenges around equity, affordability, housing and revenue and the dynamics of growth and commerce.

If Landes was largely alone in moving the levers of power to deal with big issues, Durkan enters office with the full support of the establishment — the first Seattle woman mayor to enjoy that status. Whether she has better success at achieving progress than Landes did remains to be seen. Still, that’s she’s in a position to prove herself is in itself historic.