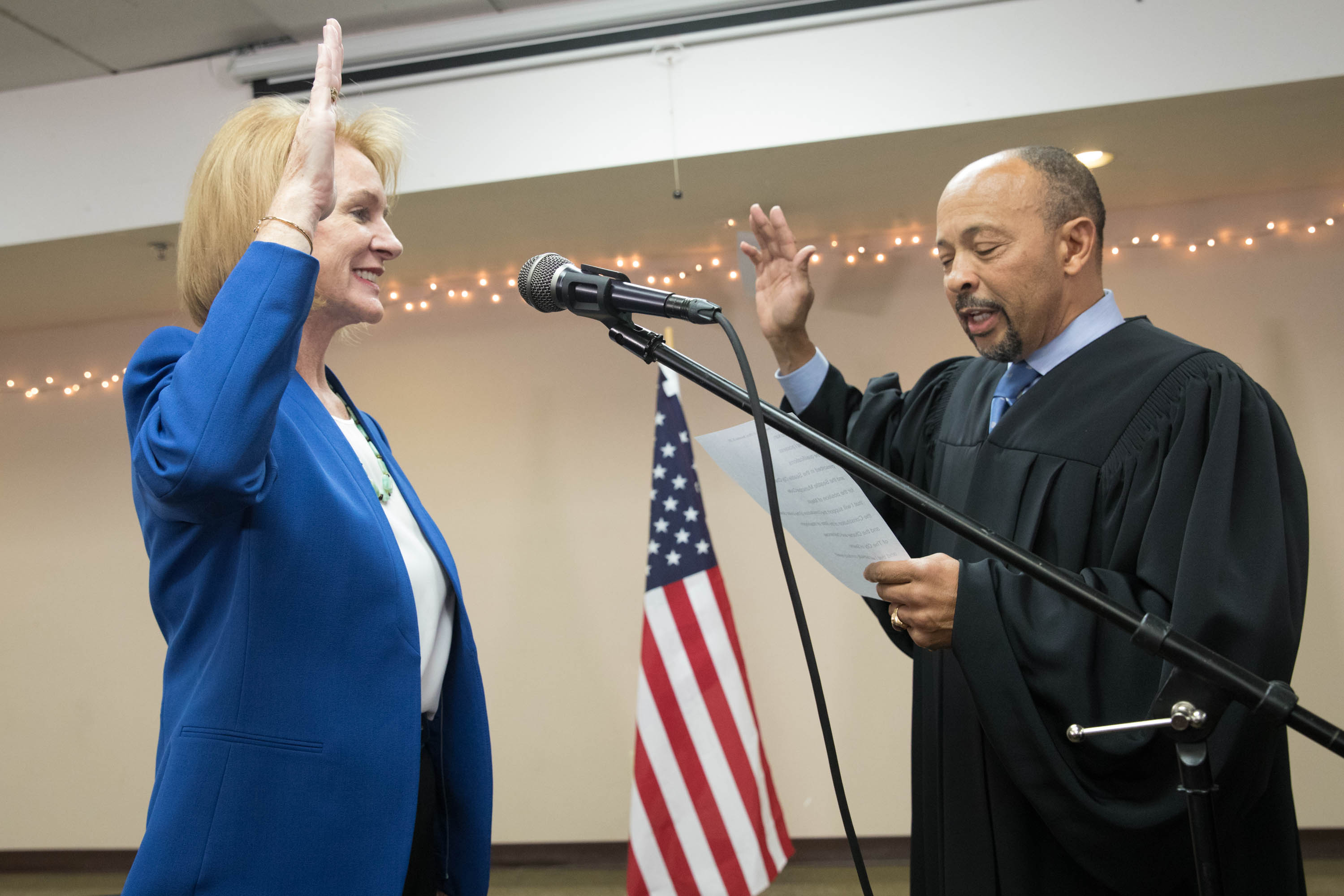 Jenny Durkan's road to become the first female mayor in nearly a century started last May on Beacon Hill, where her father nearly died. The gothic Pacific Tower — the south end’s answer to the Space Needle — was where she announced her candidacy, and it was an appropriate anchor to the story she would tell through six months of campaigning: As a hospital, it saved her war-wounded father’s life. As the former home to Amazon, its towering presence over the skyline foreshadowed the coming benefits and discomfort of growth. And now as a home to nonprofits, it’s a hub for those whom growth has left behind.

For her swearing-in on Tuesday, Durkan shed the usual City Hall spectacle in favor of Seattle's neighborhoods, traversing the city in her newly granted black SUV, starting in Rainier Beach, moving to West Seattle, then to the Chinatown/International District, to Phinney Ridge and ending in Lake City. As a candidate, Durkan hated inferences that she was the candidate of rich, white neighborhoods. Tuesday’s flurry of events was a none-too-subtle message that she would govern in every corner of Seattle.

"I wanted to show that what I said in the campaign I really meant," Durkan said. "We will be the government, and I will be a mayor not of City Hall, but of the people."

Durkan officially became mayor at a swearing-in ceremony of the Ethiopian Community Center, before a rapt audience of community members and some of her new staff. U.S. District Court Judge Richard Jones read her the oath.

For Egigayehu Dulume, it was powerful that Durkan chose this place for her swearing-in. She has a “good respect for the community,” he said. “She’s coming and looking at what we need. All communities need help.”

Durkan’s victory over Cary Moon earlier this month was an anti-climactic conclusion to what sometimes seemed a theater-of-the-absurd election season. But after months of drama, driven in large part by credible accusations of sexual abuse of teenagers by former Mayor Ed Murray, Durkan was declared as the victor just minutes after the initial results were released. After more than a hundred forums and debates, it was suddenly over, with a thud of finality.

More than for the other candidates, the ghost-of-Murray has hung over Durkan since she declared. She inherited much of his labor and business support and was the least willing to depart from his political direction. She was haunted during the campaign by her acceptance of his endorsement even after the first round of sexual-abuse allegations — disavowing him only hours before his resignation later that summer. And the issue could continue to haunt her.

She steps into what is still very much a Murray City Hall — his department appointees remain, as do many of the staff who came on under his tenure. How dramatic her arrival will be remains to be seen; she’s been guarded about personnel direction to this point, so much so that one employee in the City Attorney’s Office said they know little more than the general public.

Shortly after her swearing-in, her office did release names of some people who will be on her staff, including some familiar names like David Moseley, the former head of the Washington ferry system, and Ian Warner, Murray’s legal counsel.

In an interview with Crosscut after her election and in meetings with her transition team, Durkan has hedged the symbolic 100-day period often set by incoming executives in favor of a 120-day opening — a longer timeline reflective of Durkan’s early swearing-in to replace interim Mayor Tim Burgess. A new mayor normally takes office Jan. 1, giving more time to prepare for a fast start.

Still, she immediately has taken to the task of governing: She will sign two executive orders Tuesday, one to put into motion her plan to expand rental vouchers for people at risk of becoming homeless and another to review the city’s race and social justice initiative.

And on Wednesday, she will launch her program to offer two years of free tuition at community colleges.

At City Hall on Tuesday, Teresa Mosqueda was also sworn in, taking the Seattle City Council seat vacated by Tim Burgess when he stepped in as mayor. Like Durkan, Mosqueda's election over her opponent Jon Grant was also easy.

"I know that we can stand up not only to resist, but to persist, and we know that now, together, we must help to undo the historically racist, sexist, and classicist policies that have created the inequity that we are so determined to undo," she said in a speech in council chambers.

Both Durkan and Mosqueda now face a city in a state of emergency, with more people on the streets every year and housing prices skyrocketing.

The response from Durkan? She told the crowd at the community center, "Let's get to work."