Once homeless, now they're creating art 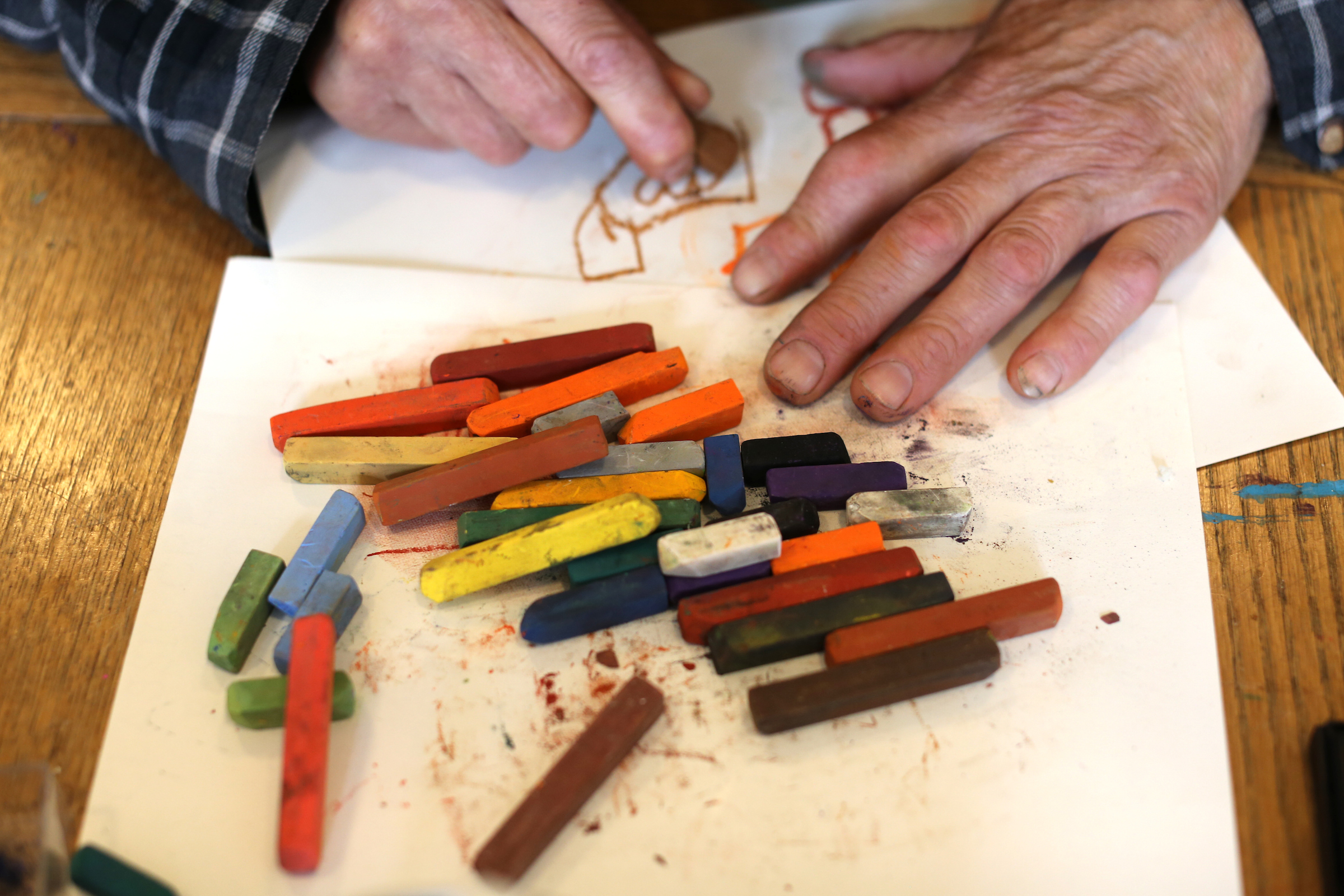 Ted Moen works on a project as part of the LEAP Artist Collective. (© Karen Ducey for Crosscut)

As the first snowfall of the year descends, the residents of Seattle's 1811 Eastlake housing project are grateful to be indoors. A handful of residents are gathered around a table of art supplies, enjoying one another's company, while the streets below take a winter's beating.

The men assembled here, weathered and strong, are the artists behind a new show, “Telling our stories: art and homelessness,” at the UW School of Social Work. Formerly homeless, they’re now permanent residents of 1811 Eastlake, a low-barrier housing project that offers residence without requirements to abstain from alcohol or drugs.

The men are also participants in LEAP — a Life Enhancing Alcohol-management Program designed in collaboration with University of Washington-Harborview's Harm Reduction Research and Treatment (HaRRT) Center, the Downtown Emergency Service Center (DESC) and the staff and residents of 1811 Eastlake. LEAP’s overarching goal is to provide a safe environment where residents can empower themselves through leadership opportunities, meaningful activities and alternative pathways to healing.

Living on the streets is hard. But what Harborview researchers found through a series of focus groups is that one of the things people without homes missed in their daily lives is art, music and poetry.

That realization launched the LEAP Artist Collective Program. Developed by the residents, the program operates out of an art room open twice a week where residents decide what activity they want to do. A speakers series, a writer's group and music jams are also offered.

LEAP, the researchers have discovered, give residents a greater sense of community. There are also other benefits. A recent study showed 66 out of 75 residents in the building participated in the program. And among those who chose to attend two LEAP activities a month, their daily drinking decreased by 16 percent.

“Instead of drinking like a fish I’m up here,” jokes Brian Darchuck, working on a drawing in an art room that’s plastered with artwork as well as worn-out cardboard signs used by some residents to ask for change.

Darchuck used to work as a karaoke DJ, entertaining at weddings and bars, until alcoholism destroyed his health and well-being and hurled him onto the streets.

“This place saved my life,” he says, snug in a Seahawks hat and scarf. He surveys what color to choose next for his drawing-in-progress. After deciding on red, he hunches over the table and gets back to work.

For an article published in a small magazine produced by the collective, Darchuck writes: "I got into art at 1811 to stay focused on my main goal, which is to not be in a shelter; to go back to real life. I like my artwork a lot, and I am trying to sell it to get to my goal.”

A man named Roger (he asked that his last name not be used)  is writing a story about a reporter  — me — who has stopped by to learn more about the artists behind the art. Roger is writing the story for an upcoming meeting of the community advisory board on which he serves.

But he agrees to be interviewed for this story, explaining how he has been sober for the past 7 years.

“It (alcoholism) was ruining my life and health," he says. "Coming here saved my life."

Seema L. Clifasefi, a UW associate professor in the Department of Psychiatry and Behavioral Sciences and the co-director of HaRRT, explains how LEAP's approach is more community-based. “This is much more inclusive and transparent. Instead of acting upon a community, it’s really more about acting alongside with the community."

Jeffrey Scott Lumsden lived on the streets for more than six years. Now he's also a member of the LEAP advisory board. He answers in the same way as Roger does about the impact LEAP has made. “It saved my life,” he says. “It’s a huge responsibility (serving on the advisory board). I don’t make decisions on my own. I make them with others.”

He proudly points out a mural made by the artist collective that hangs in the building's lobby just outside the small LEAP art room. The mural, comprised of individual artwork, features swirling colors and a mix of styles that reflect the six different artists.

Above the mural, a quote by Angie Webster, a resident who recently died, reads: “Fear not for failure is not fatal but failure to try is.”

The LEAP art’s collective show, “Telling our stories: art and homelessness”continues at the UW School of Social Work through Dec. 15.