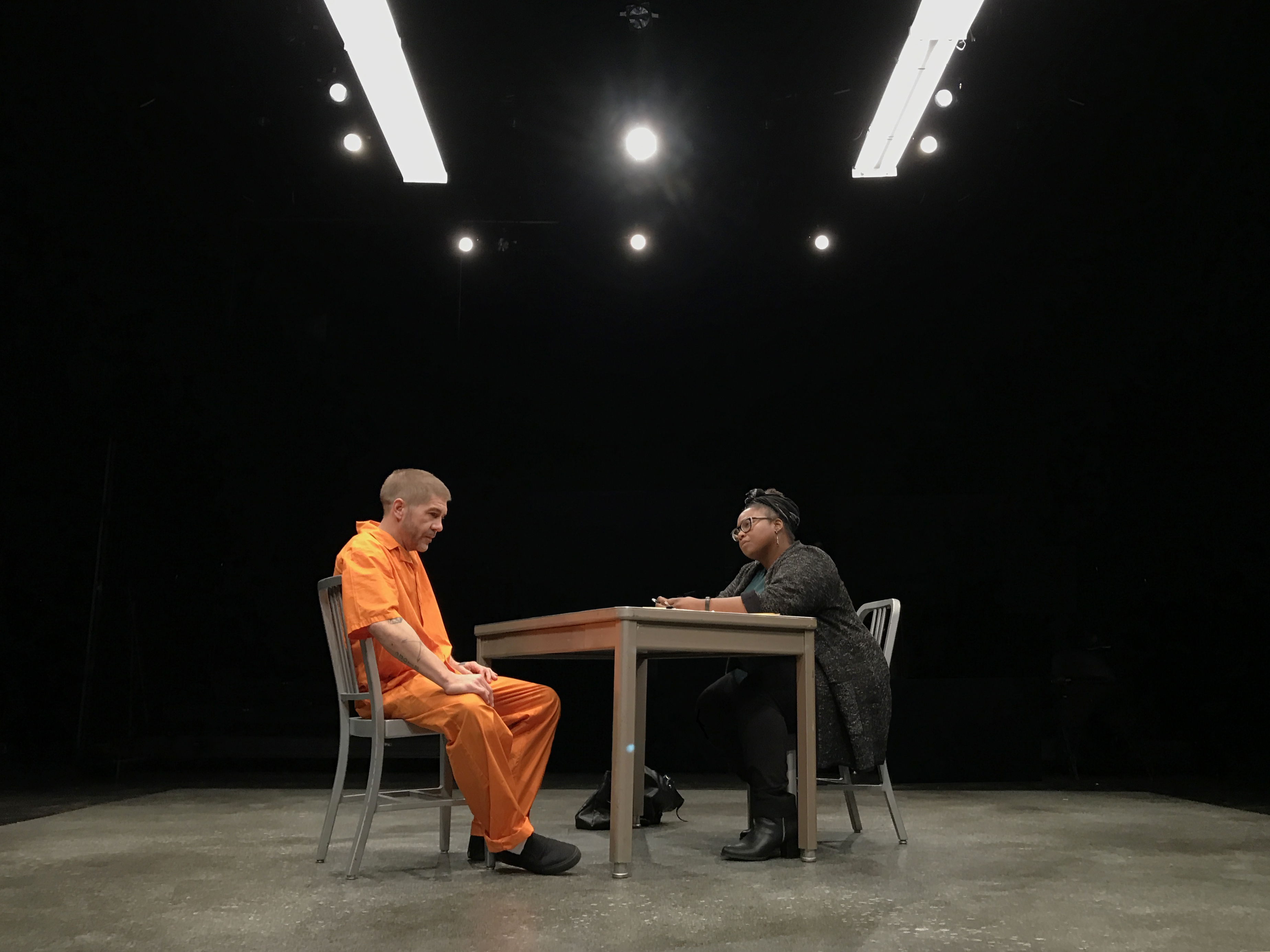 Robert Schenkkan has dug deeply into the American past in his award-winning plays, some of which originated in his former home base of Seattle.

But in his latest work, Schenkkan was compelled by current events to look ahead and imagine the future. His two-actor stage drama “Building the Wall” is set in 2019 in the wake of a major terrorist attack in the United States. President Donald Trump has ordered the immediate arrest and detention of tens of thousands of immigrants. Under pressure from the federal government, a prison official is one of those tasked with coordinating the mass detentions. And after things go horribly wrong, he’s one of those blamed for the policy’s tragic consequences.

Written in what Schenkkan has described as a “white-hot fury,” the play unfolds in the format of an increasingly disturbing interview as Rick, the prison official, attempts to explain and justify his actions to a female historian.

"Building the Wall" has drawn substantial interest across the country and abroad. So far it has been presented in more than 40 cities, including Los Angeles and New York, as well as Vienna, Austria and Tehran, Iran. A London staging is slated for next spring.

Schenkkan (a former Seattle resident) has delved into corners of American history with great success in Pulitzer Prize-winning plays about the presidency of Lyndon B. Johnson (“All the Way,” produced here at Seattle Repertory Theatre) and the state of Kentucky (“The Kentucky Cycle,” which originated at Seattle’s Intiman Theatre).

He has also looked back to other eras to write and produce Emmy-nominated episodes of a TV series set during World War II (“The Pacific”) and a biographical film about a 19th century Native American chief (“Crazy Horse”).

But the urgency of now is on his mind these days.

The playwright recently chatted with Crosscut about “Building the Wall,” the efficacy of political theater in contemporary times and what he hopes to achieve with this particular piece of speculative drama.

Q: How did “Building the Wall” come about?

A: I wrote it in October of 2016 actually, before the election. I had not been mulling it over for long, to be honest. It was pretty much a spontaneous reaction to the then-Republican presidential candidate [Trump] and his deliberate race-baiting rhetoric. Also to the way otherwise intelligent party leaders and commentators were normalizing this kind of behavior. To me, that was a real danger.

Q: Overtly political theater has not been popular in the U.S. for decades. Where did you turn for dramaturgical inspiration?

A: I’d read a book that made an impression on me called “Into that Darkness: An Examination of Conscience,” a classic of Holocaust literature by Gitta Sereny. It’s about an individual [Franz Stangl] who rose very high in the Nazi hierarchy in Germany and ran the Treblinka concentration and death camp. He was arrested later for war crimes, and Sereny interviewed him, his family and some people he worked with. It was a very illuminating and compelling journalistic exercise. I was struck by the whole notion of addressing an individual after the fact, to determine where the responsibility for such terrible events really lies.

Q: In “Building the Wall” are you making an analogy between America and Nazi Germany, and between Stangl’s situation and that of Rick [the prison warden], the lead character in your play?

A: I don’t want to lean too heavily on the Germany parallel because there are so many relevant, more current examples. A lot of democracies are facing a resurgence of this kind of nativist, authoritarian impulse, for example in France with Marine Le Pen’s reactionary political movement.

Like a virus, this impulse can lie dormant and in times of crisis it re-emerges… And the playbook is well established. You demonize the judiciary and the press, single out racial or religious minorities, and you centralize power and coarsen the public conversation, so people tend to look away from the evil because they’re embarrassed or just appalled by it.

Q: The wall in your title is an obvious reference to Trump’s campaign promise to build a massive fence along the border between the U.S. and Mexico. But that hasn’t happened in his first year in office, and may never happen.

A: The wall was clearly a political gesture, a symbol, a rallying cry for Trump. Certainly, my play is concerned with border security, immigration policy and also the use of privately run prisons. But more importantly, it’s about not turning over one’s individual sense of moral responsibility to the state. It’s about what it means to be conscious and aware of what’s taking place around you. And when you disagree to be active, to resist.

Q: If you feel so strongly against Trump’s rhetoric and his policies, why have you set “Building the Wall” in the future?

A:  By putting it in a future situation you can give the audience enough aesthetic distance to engage with it more. That’s what Margaret Atwood did in “The Handmaid’s Tale.” That’s what George Orwell did in “1984.”

Q: Though Rick makes some very disturbing decisions that adversely affect the people in his custody, you do not make him monstrous. He’s very much an average Joe, even likable.

A: I think that is the hardest thing and one of the most important things — trying to understand an individual who is not really a bad guy. He’s not evil, not psychotic or sociopathic, but he finds himself in a really tragic situation. I want us to understand how that kind of journey could unfold.

And I made the person who interviews Rick an African American woman because I think our current crisis is very much about race. I wanted her voice in the room to challenge Rick’s assumptions.

Q: You hoped the play would be produced quickly, all over the world. Did that affect the writing of it?

A: Certainly. First off, it’s just two characters in a single room, so you need only two actors. And it was designed to be as portable as possible so that anyone anywhere, in a large theater or a church basement, could present it. Usually with a new play you and your agent plot out when and where the premiere should be, when it should go to New York, all with an eye toward maximizing the author’s royalties. But that wasn’t so important to me with this.

Q: A lot of the criticism of the Trump Administration in arts and entertainment has been in the form of political satire. Some critics have lauded you for taking the leap to seriously address concerns about the direction of the country. But the question has also arisen: With an American theater audience that tends to skewer older and politically liberal, especially in Seattle, are you just preaching to the choir?

A: Actually, I’m very pleased with the diversity of where the play’s been seen so far, in terms of rural and urban, red and blue areas of the country. I don’t see myself trying to convert someone who strongly believes in Trump’s immigration policies. What I intended, and what has come to pass, is a very provocative evening in the theater, which has been tackling such questions since Sophocles and ancient Greece. I want the play to result in a very muscular conversation about the issues it raises. I’ve made it clear we’re in a certain political moment, and I’m saying, look at the kind of ethical and moral challenges we’re facing right now. How do we deal with them before they get totally out of hand?

I feel very strongly that we can’t wait, we’re in a crisis, and I’m sure people will be writing about this moment for decades to come. But we can’t be leisurely in addressing it. We’ve got to put out the fire right now.

Azeotrope's production of "Building the Wall" opens at Seattle's 12th Avenue Arts on Dec. 1. Performances run through Dec. 23. All performances are free. Tickets can be reserved online.