What the election means for Seattle and the country 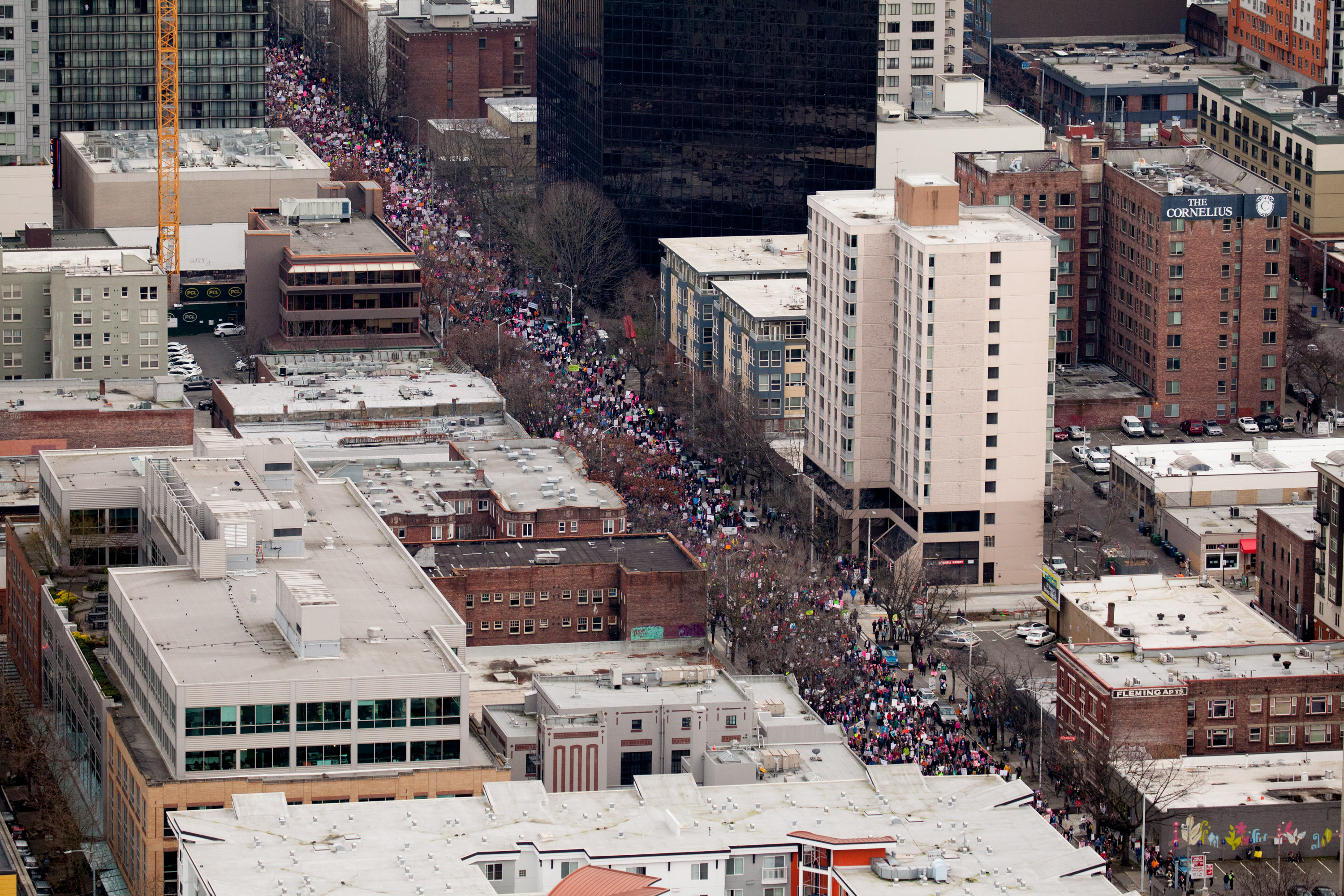 "When women talked about doing something more after the Women's March in January, many talked of running for office — realizing that women were just not as equal as we thought we were,” says political consultant Cathy Allen.

From brewpubs to ballrooms, roving on election night can yield insights beyond the numbers. Here are my five election-night takeaways.

On election night, the crowd at Jenny Durkan’s election night party at the Westin’s ballroom was filled with Seattle establishment figures — a former mayor, PR spinners, legislators, downtown business figures. Before results were announced, few were willing to make an election prediction. The establishment was nervous: Since Mike McGinn’s insurgency and Kshama Sawant’s election, the conventional wisdom doesn’t trust itself anymore. Former City Councilmember Jan Drago, sipping red wine, told me she’s out of the prediction business. “The city has changed so much.”

Or not. Durkan’s victory has the Seattle establishment breathing a huge sigh of relief. KEXP commentator and longtime columnist Geov Parrish says Durkan “will be Ed Murray's second term, only without the creep factor.”

A year ago, Donald Trump’s election triumph shocked Seattle, but immediately the city leaders announced themselves part of the Resistance. This year, by capturing the 45th Legislative district state senate seat, Democrat Manka Dhingra has put a key brick in what Senate leader Sharon Nelson of Maury Island described to the New York Times as a “blue wall from the Canadian border to the Mexican border.” That wall consists of California, Oregon and now Washington, where Democrats will have control of the governorships and state legislatures in all three states.

But while that makes a statement nationally, as the West Coast forms a kind of progressive bulwark against Trumpism, it is more than symbolic for folks in Washington. It could mean progress on funding education, healthcare and a capital budget, says State Senator Reuven Carlyle of Seattle. What might we see now from Olympia? “I expect you will see the legislature responsibly, humbly working on real issues impacting real people.” In the face of Trump’s ideology, he continues, “There’s never been a time in generations that the state government has mattered more.”

The blue brick Dhingra represents was purchased dearly. That was reflected in the result that Democrats sought and Republicans fought with a record $9 million in campaign spending for a single suburban Senate seat in Olympia.

Seattle has finally broken the Bertha Knight Landes curse, having elected our first woman mayor since Landes some 90 years ago. Or as a press release from the Gay & Lesbian Victory Fund announced, “Jenny Durkan to Become First Out Lesbian Mayor of Seattle,” presumably not wanting to make any assumption about Landes’ orientation. But the election was “a banner night for women candidates” according to Maggie Humphreys of the National Women’s Political Caucus of Washington State.

Longtime Seattle political consultant Cathy Allen, who has long been a major force for women in politics, was exultant. She points out that out of some 230 King County candidates for office, 40 percent were women, up from the usual 30 percent. “Where there are 11 women mayors right now in our cities of over 30,000 people, by tomorrow it might be 27 women mayors all over the state,” she says. “When women talked about doing something more after the Women's March in January, many talked of running for office, realizing that women were just not as equal as we thought we were.”

Jenny Durkan will take over at City Hall with a host of challenges on her to-do list: homelessness, housing affordability, police reform and union negotiations, and possibly a property tax bomb. King County Assessor John Arthur Wilson predicts that the impact of the legislature’s plan to fund education statewide could raise property taxes early next year as much as 20 percent or more in Seattle. “Does Tim Eyman finally get his policy wet dream?” Wilson wonders.

City Councilmember Mike O’Brien says money will need to be raised by the city for urgent needs, but this could coincide or clash with impending property taxpayer sticker shock.

The left-leaning council and the more centrist progressive mayor will have to work together through some tough and intractable challenges without, perhaps, the usual piggy bank to draw on.

Luck of the Irish?

Interesting fact: Including Jenny Durkan, the last four elected Seattle mayors have been of Irish Catholic descent. Durkan happily embraces this history. Turns out she studied Irish (Gaelic) in school and can speak some of it. Also, at Notre Dame, she once won a beer keg tossing competition — what could be more Irish than that?

Curious about this mayoral trend, I asked resident Irishman Tim Egan, the author of the recent book “Immortal Irishman” about a 19th century Irish-American revolutionary and Northwest political figure, if he had any insights. He did.

“Politics, dating certainly to Tammany Hall … has always been the best way for Irish Catholics to advance in this country. Struggle is certainly in our blood,” he says. “I've found that most people who come from Irish Catholic families learn at an early age to speak their minds, and certainly to brawl. With the exception of a few terrible and well-known renegades on the media side (Hannity, O'Reilly) we've always been on the side of the oppressed.”

Let’s hope those qualities serve our city well in the next four years.

This story was corrected to reflect that Sen. Sharon Nelson is from Maury Island, not Spokane.