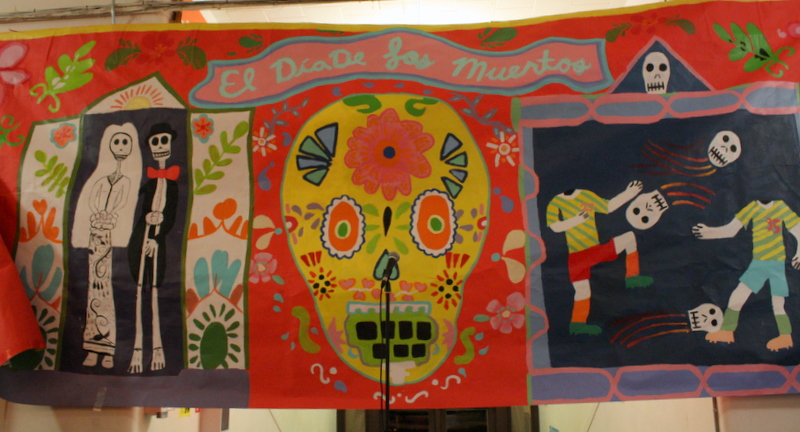 Maybe it’s because we’re in dark times, or (more likely) it’s because I just finished mortician Caitlin Doughty’s compelling new book "From Here to Eternity," but I believe all Americans should be talking more about death. In the U.S., death is often medical, sterile and commercial and death rites are cold and disconnected. Lucky for us, many other countries have customs we can look to. Check out this celebration of the Mexican holiday Día de los Muertos at the Phinney Neighborhood Center. Poet Raúl Sánchez will guide participants through a workshop on the symbolism and traditions of Día de los Muertos and the building of ofrendas, or altars, that the holiday is known for. Bring personal items or photos of a passed love one to contribute to the Phinney community altar, and leave with instructions on how to make a personal altar at home. And most importantly, talk about death and channeling the energy of mourning.

The Seattle Process with Brett Hamil

Called the "John Oliver of local Seattle politics” by Kshama Sawant, comedian Brett Hamil hosts another edition of his semi-annual political comedy talk show The Seattle Process. Held in the intimate space of Northwest Film Forum, it includes Human Warmth-up Act comedian Evan Montgomery (and his dog),  politically uninformed sidekick Travis Vogt and a musical guest (this time Kevin Murphy of The Moondoggies). This edition’s special guest is none other than mayoral candidate Cary Moon. Expect a level of goofy comedy and smart conversation untouched by anything else in Seattle.

This is the 7th year of the Short Run Comix + Arts Festival, which just keeps getting bigger and better. Take in (and, of course, buy) the work of 270 exhibitor artists, local and global, enjoy an epic bake sale and take part in a host of activities. They range from life-size coloring pages to a screening of a new Seattle Experimental Animation to conversations about comics journalism with big name comic artists Jesús Cossio, Joe Sacco, and Sarah Glidden. I’m particularly excited for this year’s guest Anders Nilsen, whose work ranges from the gigantic modern fable Big Questions to the blend of short strips and collage in the humble The End (a book about the loss of his fiancé), all balancing dark humor and heartbreak in a way that I can’t look away from. Expand your comic and graphic novel horizon and collection, plus get started on holiday gifts.

Head to the Northwest African American Museum for a night of food, conversation and exhibits, all benefiting the non-profit Food Empowerment Project, which “seeks to create a more just and sustainable world by recognizing the power of one’s food choices.” FEP founder Lauren Ornelas will be there and your ticket will also include admission to NAAM’s exhibits, including “Unshuttered, Black Joy,” a photo exhibit featuring the work of local female artists. Dinner takes the form of Trinidadian doubles, which are delicious, naturally vegan chickpea flatbread sandwiches.

Made in Puget Sound: An Evening with Underwater Photographer Drew Collins

Since 2009, Drew Collins has been diving and photographing in Puget Sound, connected to our waters in a way few of us are. Hear about his time spent in a cold, mysterious Puget Sound, how we connect to our fragile ecosystems, and see the marine life he’s caught on film (yes, including the Giant Pacific Octopus) in this special event, hosted by the Seward Park Audubon Society.