Court says ex-inmate can be a lawyer 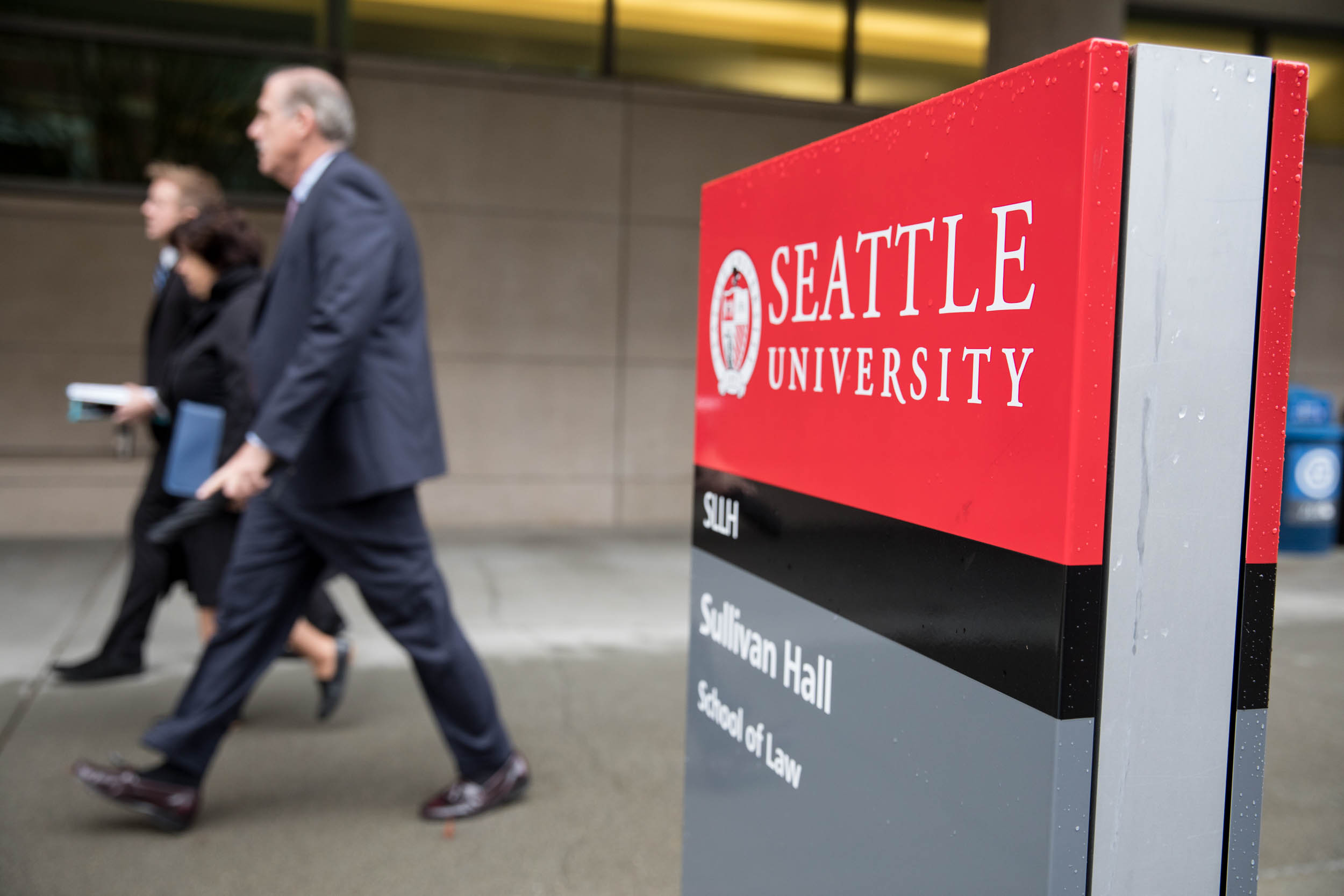 Exterior of Seattle University School of Law at Sullivan Hall in Seattle.

Update: On Thursday, November 16, the Washington state Supreme Court ruled unanimously that Tarra Simmons "has the requisite moral character and fitness to practice law" and "shall be allowed to sit for the Washington bar examination."

In a recent snapshot circulated on social media, local law school graduate Tarra Simmons is seen standing next to Laverne Cox, an actress celebrated for her role on Netflix's hit series about incarcerated women, Orange is the New Black. What isn’t obvious from the picture, taken at an ACLU dinner, is that Simmons herself — shoulder-length brown hair; fancy, maroon dress — served time in prison for a drug-related conviction. Also not apparent is that Simmons possesses a comeback story fit for the screen, one that might be on the verge of being undone.

In April, just before she graduated from Seattle University School of Law, Simmons’ past came back to haunt her. Because of her criminal record, a Washington State Bar Association panel voted 6 to 3 against letting Simmons even take a test that could lead to her admission to the bar. So, unlike the anxiety most graduating law students experience ahead of the bar exam, which every lawyer must pass in order to practice, Simmons’ concern was different: She faced the possibility that she would never even be given the opportunity to take the test.

Now, the Washington state Supreme Court is poised to weigh in on the case. A court hearing scheduled for Thursday will pit Simmons, and dozens of distinguished lawyers who support her effort to become an attorney, against those who denied her the opportunity — the state bar association.

The last time the state supreme court weighed in on a case with similarities to Simmons’ was 1984. Although the bar association’s Character and Fitness Board makes the initial determination about whether someone is fit to become a lawyer, the ultimate decision rests in the court’s hands.

The purpose of the Character and Fitness Board is to protect the public from unscrupulous lawyers. The board examines an applicant’s past but if too many red flags show up, a candidate submits to a more thorough review. On April 14, Simmons appeared before the board for approximately five hours but was rejected outright in the 6-to-3 vote.

Angeline Thomas, executive director of Washington Appleseed, an organization that works with pro bono attorneys on a variety of social-justice issues, said she was “absolutely shocked that the bar denied” Simmons.

“She puts the rest of us to shame in terms of her community involvement,” Thomas said. Simmons “literally did everything right,” Thomas continued, while noting that Simmons had always been transparent about her past.

“I think this is much bigger than her," she continued. "I think as a society we think we want people to succeed after prison." But, Thomas said, it's not true.

“I know a lot of lawyers,” said King County Prosecutor Dan Satterberg who, along with Simmons, co-chairs the Statewide Reentry Council, which Gov. Jay Inslee created in 2016 to improve public safety and outcomes for recently released prisoners. “She is a brilliant and energetic, young woman who should be a lawyer.”

Her “life experience really drives her to be a force for change.”

Simmons grew up in Bremerton. As has emerged in various reports, and as those close to her know, Simmons, as the child of divorced parents, often traveled to Stockton, California to visit her father. Simmons’ mother was a severe alcoholic, drinking first thing every morning. Dad was in no better of a situation, addicted to hard drugs, like crack and meth. As a child, Simmons’ parents even encouraged her to steal to support their drug habits. She first tasted alcohol when she was 7 years old; she smoked pot for the first time when she was 11. She left home when she was 13. A teenage pregnancy complicated the situation even further. By the time she was in her 20s, Simmons had become a daily drug user.

Yet, Simmons had always done well in school. She graduated from nursing school and received a RN license. For years, Simmons stopped using. Then, in 2010, her father died. As she tried to soothe her sorrows, Simmons once again turned to drugs. Seven months into her addiction, she found herself stealing again. It wasn’t long before Simmons ended up in trouble with the law and was sentenced to 30 months in prison.

In 2013, Simmons was released from Mission Creek Corrections Center for Women in Belfair. Confronted with the need to support two children, she struggled to find a job. Although Simmons still had her RN license, no one would hire her because of her criminal record. Desperate, she took a job at Burger King. And then, frustrated by her continued setbacks, Simmons settled on an ambitious plan: law school.

Simmons wasn’t necessarily naive in her ambition, but had reasons to be hopeful. In a recent segment, the national newsmagazine 60 Minutes profiled Shon Hopwood, one of the lawyers representing Simmons at the state supreme court in Thursday's scheduled hearing, and described him as someone who possessed "a tale of redemption as improbable as any you're likely to hear" and "arguably the most successful jailhouse lawyer ever." While still serving time in prison, a case Hopwood prepared was argued before the U.S. Supreme Court. Attorneys like Hopwood, a convicted bank robber who served 12 years in federal prison, served as role models for Simmons.

Yet, even before the Washington State Bar Association rebuffed Simmons, there seem to have been, particularly in retrospect, signs she was not going to have an easy time of becoming a lawyer. NW Lawyer, the official publication of the state bar association, abruptly killed, or at least put on hold, an article Simmons wrote for the magazine without offering an explanation as to why the magazine's editors had had a change of heart. Some suspected it was related to the bar association's already manifest hesitancy in granting Simmons admission.

Still, in July, Simmons and her lawyers appealed the bar association's decision against letting her take the exam and held out hope the organization would begin to change its mind, arguing that Simmons had “led a blemish-free life since 2011” and that “the court would be hard pressed to find a more compelling case of rehabilitation.”

In August, the ACLU of Washington, 48 additional organizations, 34 attorneys and 20 law school faculty members filed an amicus brief on behalf of Simmons. "The legal profession should not unnecessarily deny opportunities for people with criminal histories, thereby exacerbating already well-documented barriers to postincarceration reentry," the ACLU wrote. "Instead, the profession should consider candidates on an individualized basis and if a candidate proves through evidence of rehabilitation that her current character and fitness are satisfactory, that evidence of transformation should be sufficient."

"Here, the record shows Ms. Simmons’ rehabilitation, against overwhelming odds, through more than five years of exemplary behavior." The ACLU also pointed out that more than 80 separate letters of recommendation were submitted on behalf of Simmons.

Most upsetting to some, however, was the state bar association's attempt to block the amicus brief filed by the ACLU and other organizations. In court documents, the state bar association argued that "there is no rule permitting the filings of amicus briefs in appeals," and that such filings "do not assist the court because they restate the arguments made by applicant."

“It’s as if they’re saying, yeah there’s a process, and we’re going to be the only voice, other than this one individual person,” said Lisa Daugaard, who as director of the Public Defender Association, a nonprofit that advocates for justice system reform, works with Simmons. Simmons is completing work related to her Skadden Fellowship at the Public Defender Association by expanding a program known as LEAD, or Law Enforcement Assisted Diversion, which focuses on diverting low-level criminal offenders to community-based intervention programs.

"It isn’t the job of the bar association to shut the door on that conversation,” Daugaard argued. "The Washington Supreme Court is the Supreme Court, they can handle it. If we’re wrong, they will be able to tell us. They don’t need to be protected from opinions.”

In the end, the court sided with Daugaard and accepted the brief, but the fact that the state bar association had attempted to block it prompted dozens of lawyers and organizations to sign an open letter addressed to the association's board of governors.

"The Bar should not be in the business of encouraging Washington courts to shut their doors to the advocacy efforts of its own members and distinguished community leaders," reads the letter. "It's unseemly, and a misuse of the gatekeeper role the WSBA plays in our profession."

Because Simmons' case is sealed, the bar association’s reasoning for denying Simmons admission to the bar in the first place isn’t completely clear, though there are clues in the appeal itself and the amicus brief filed. The bar association argued Simmons had a “sense of entitlement,” because she asked that her application not be referred to the Character & Fitness Board for a hearing. Simmons' rehabilitation was also referred to as "embryonic." Simmons has “not yet established an overall consistent and proven pattern of positive conduct that outweighs her years of misconduct,” the bar association argued.

In an email, Sara Niegowski, chief communications officer for the Washington State Bar Association, reiterated that "the Supreme Court has the ultimate authority" to decide Simmons' case and added that when evaluating a candidate, "an applicant’s criminal record—its length, seriousness, and history of relapse—is one consideration, and there is no circumstance that would absolutely prevent an otherwise qualified applicant from getting approved for admission."

"The underlying belief is that anyone who is admitted to the practice of law—with access to money, vulnerable clients, and power—should be held to a rigorous standard to protect the public."

Daugaard, however, believes that “allowing somebody to move into work that they are very well suited to do, that there is very high demand for them to do, is probably the single best strategy that one could deploy in order to ensure that this story turns out well.”