After Jayapal, are South Asian women about to reshape local politics? 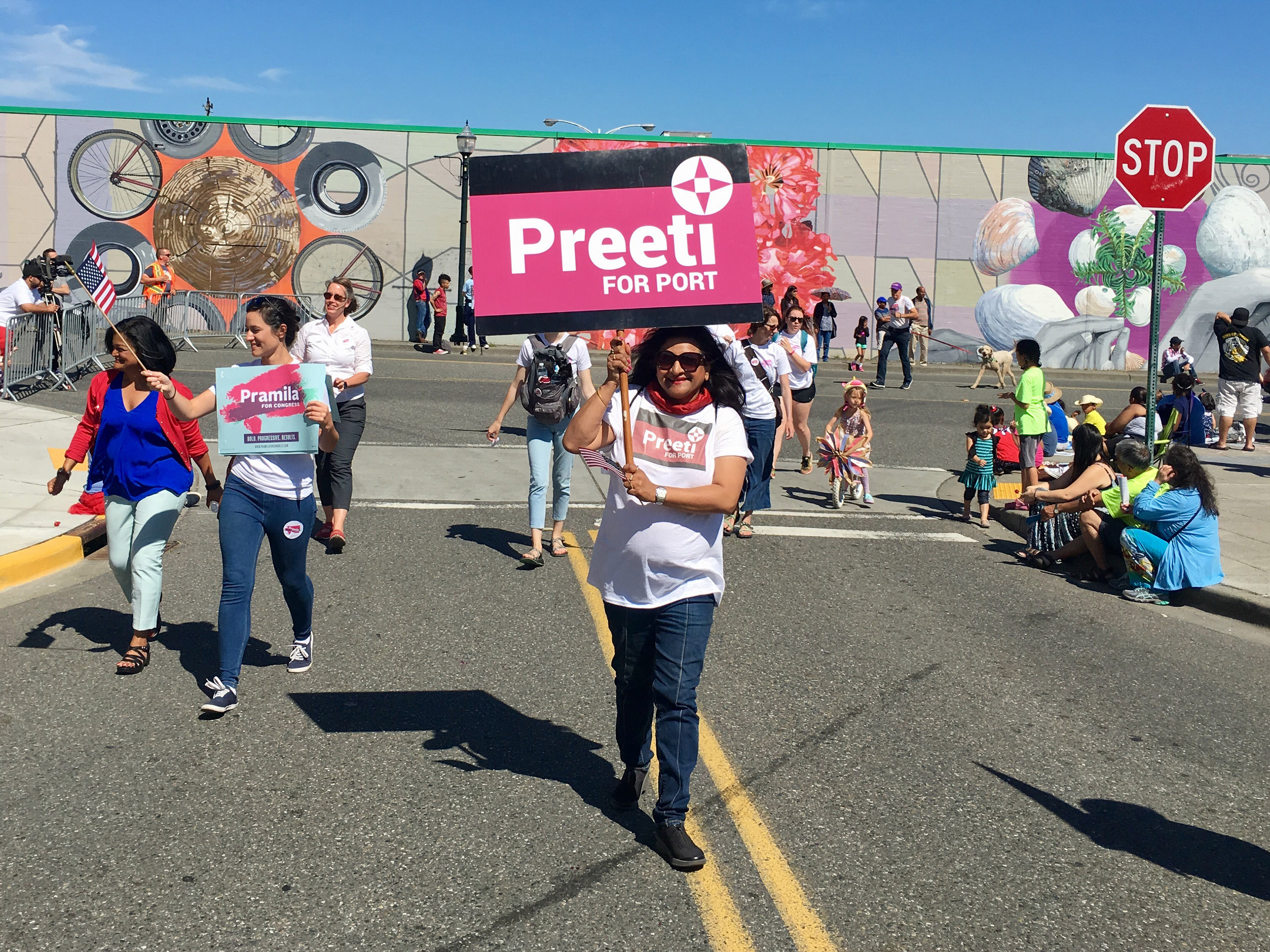 Port of Seattle candidate Preeti Shridhar marches in a 4th of July parade alongside Congresswoman Pramila Jayapal in Burien, Washington.

Update after November election results below.

Just weeks after Pramila Jayapal became the first Indian-American woman to serve in the U.S. House of Representatives, she joined other officials and thousands of activists in rushing to Sea-Tac Airport to learn the fate of arriving passengers subject to President Donald Trump’s travel ban.

The dramatic scene in January, which led to judicial intervention and two passengers being pulled from a plane after federal authorities tried to deport them, caught the attention of Preeti Shridhar, who — like Jayapal — came to the U.S. from South Asia. “It really incited me to say, you know, we need to do something,” says Shridhar, who soon announced her candidacy to be a Port of Seattle commissioner.

This year, she is one of eight women of South Asian origins — from India or Pakistan — who are on the Nov. 7 ballot for various offices in King County. All but two of the eight are first-time candidates. In addition, Mona Das, whose parents immigrated from India when she was an infant, is seeking the Democrats’ 2018 nomination for Washington’s 8th Congressional District seat in the U.S. House of Representatives, effectively following in Jayapal’s footsteps.

Compared to previous elections, the tally of female South-Asian candidates is significant, according to Dr. Amy Bhatt, co-author of “Roots and Reflections: South Asians in the Pacific Northwest” and associate professor of Gender and Women’s Studies at University of Maryland. “[South Asian Americans] have had such a low historic presence in elected offices at all levels across the United States,” Bhatt says.

But Jayapal’s election last November to U.S. Congress may represent a turning point. Her victory and the fact that Washington state is home to one of the oldest South Asian immigrant communities in the country — dating back to the beginning of the 20th century, when Sikhs first arrived here to work in timber and farming — might explain why we’re seeing such an interest in running for office.

Early South-Asian immigrants came mostly as laborers and those who arrived in the mid-20th century generally came either for higher education opportunities or to join family members already here. They tended to not be very political, according to Bhatt.

“But, now we are seeing first- and second-generation immigrants [running for offices], in part because the community today is more complex and multigenerational,” says Bhatt, herself a second-generation Indian American. “There is also the awareness that with rising Islamophobia and rising xenophobia in the country, if we don’t start taking a stronger stance, politically, we are also going to be victimized.”

Asians are the fastest-growing immigrant group in the United States. In Washington state, the South Asian immigrant population doubled between 2007–13, from 45,495 to 93,687, according to a report by the National Commission on Asian American and Pacific Islander Research in Education. South Asia generally refers to the region that includes India, Pakistan, Bangladesh, Bhutan, Nepal and Sri Lanka.

Shridhar came to the United States from India on a scholarship to attend college in St. Paul, Minnesota. She made her way to Seattle 25 years ago with her former husband. Here, she built a career in public service — she’s currently deputy public affairs administrator for Renton — and raised her son. She decided to run as a candidate for the port commission when she saw the airport, which is managed by the port, at the center of anti-Trump protests against the travel ban.

Her first-time campaign — she faces former Seattle City Councilmember Peter Steinbrueck in the Nov. 7 General Election — has had its challenges. She had no name recognition when she started; she was the only female in a slate of eight during the primary; and she didn’t initially have significant support from the local community.

She says the success of Jayapal encouraged her and other South Asian-American women to run.

Those include Shridhar’s friend Rituja Indapure, who also launched a first-time campaign for an elected office this year.

“It seems like the right thing to do at this point in the history of our country — that is why I decided to run,” says Indapure, who is running for Sammamish City Council. The mother of two is trained as a lawyer and works as a senior analyst at Costco. She has long been socially active in her community, volunteering at local nonprofits, playing an active role in her kids’ PTSA and hosting her own podcast series interviewing folks about local social issues.

“Both India and Pakistan have had female prime ministers,” Indapure says, “so probably that plays a role subconsciously in saying to ourselves, ‘We can do it too.’ ” Indapure has mobilized the local South Asian community in Sammamish, including youth who had never before participated in a political campaign. “People want to see a true representative in the government,” says Indapure. “So that has been good for me [in terms of gaining the support of the local South Asian community].”

While she has gained significant support in the community, her South-Asian identity has also presented some challenges. “I have seen people being more judgmental [because of my ethnicity] or some people saying, ‘We can’t even pronounce her name, so how are we going to vote for her?’” Still, she says, most people have been supportive.

The highest-profile South-Asian candidate is Manka Dhingra, who is running as a Democrat in the 45th District for the state Senate in a hotly contested race against Republican Jinyoung Lee Englund, the daughter of Korean immigrants. The Eastside race is in the spotlight because the outcome will likely determine whether state Republicans maintain control of the Senate. Dhingra is a former King County senior deputy prosecuting attorney and is co-founder of the nonprofit Chaya, providing support to South Asian women experiencing domestic and sexual violence. She says Trump’s election “really made me think long and hard about what I wanted to do and I knew that I had to get involved.”

Other South Asian-American candidates running for office in King County include Satwinder Kaur for Kent City Council and Pakistani-born Uzma Butte for Kirkland City Council. Vandana Slatter, who was the first Indian American to serve on the Bellevue City Council, is currently running as an incumbent to keep her seat in the state House of Representatives. Tanika Padhye is running to retain a Redmond City Council position that she was appointed to in March. Maya Vengadasalam is running unopposed for re-election to the Kent School Board.

Kshama Sawant, an immigrant from India, was first elected to the Seattle City Council in 2013.

For her part, Jayapal has been highly supportive of all those who are running. “I am thrilled to see so many people running,” she said. She’s made a point to endorse Dhingra, Shridhar and Indapure for the general election.

"I really do believe that you get better policy when you have voices that represent the whole community at the table and I also believe that more voters get engaged if they can see themselves in their elected officials,” Jayapal said.

“As the first South Asian-American woman ever elected to the state Legislature and now the first South-Asian woman in the U.S. House of Representative, I don’t want to be the last,” she said.

Indapure says Jayapal was one of the first people to offer her support — and advice: Be authentic, be yourself, no matter what. Words that Indapure has found to be valuable reminders throughout her campaign.

The uptick in South-Asian female candidates accompanies an overall increase in the number of women interested in seeking office. Emily’s List, an organization that trains Democratic women to run for office, reported that over 19,000 women have signed up since Trump’s election. Nonpartisan organization Center for Women and Politics reported 270 women signed up for its Ready to Run seminar, as opposed to an average of 175 in previous years. Another nonpartisan group, IGNITE, an advocacy group for young women interested in running for office, expects to train over 5,000 young women in 2017–2018. Crosscut recently reported on women running for office in rural Washington.

On a recent Thursday evening, after a full day of work, Indapure is out walking door to door in a Sammamish neighborhood, as she has done throughout the campaign. In the August primary, she finished second in a three-way race that was led by another first-time candidate, Chris Ross, a senior financial analyst for Boeing. Sometimes she is accompanied by a group of supporters, but often she’s by herself, as she is this evening.

She knocks on the first door and is greeted by a family. They are South-Asian Americans, already familiar with the issues on which she is running, and are enthusiastic to vote for her — the daughter wants to volunteer for Indapure’s campaign.

Out of over a dozen homes she visits this evening, about half don’t answer the door, a couple are too busy to hear her out, one is not a voter, and the others are receptive and agree to consider voting for her.

Indapure has become accustomed to this routine by now. “Usually, it is a good experience,” she says. “But some evenings, when most people don’t answer the door, that’s when it feels a bit exhaustive.”

Still, regardless of how her election turns out, the experience of running has been empowering, she says. “It allowed us to say, ‘Yes, we can do this. This land belongs to us. This is our country and we have equal rights.’”

Update after November election results: Among the candidates profiled in this story, Manka Dhingra won in the 45th District race with a ten point lead. Her win assured Democrats control of the Washington Legislature. Vandana Slatter retained the 48 District position in the state House with more than 73 percent of votes. Tanika Padhye kept her position in the Redmond City Council with more than 61 percent of votes. Satwinder Kaur was elected to the Kent City Council with 56 percent of the votes. Maya Vengadasalam, who ran in an uncontested race, retained her position as a Kent School Board Director. Avanti Bergquist was also elected unopposed in her race for the Renton School Board.Preeti Shridhar lost her race for Port Commission Position 4 , and Uzma Butte didn't win a seat on the Kirkland City Council. Rituja Indapure also lost her race for the Sammamish City Council by 7 points.