Seattle should listen to Ta-Nehisi Coates 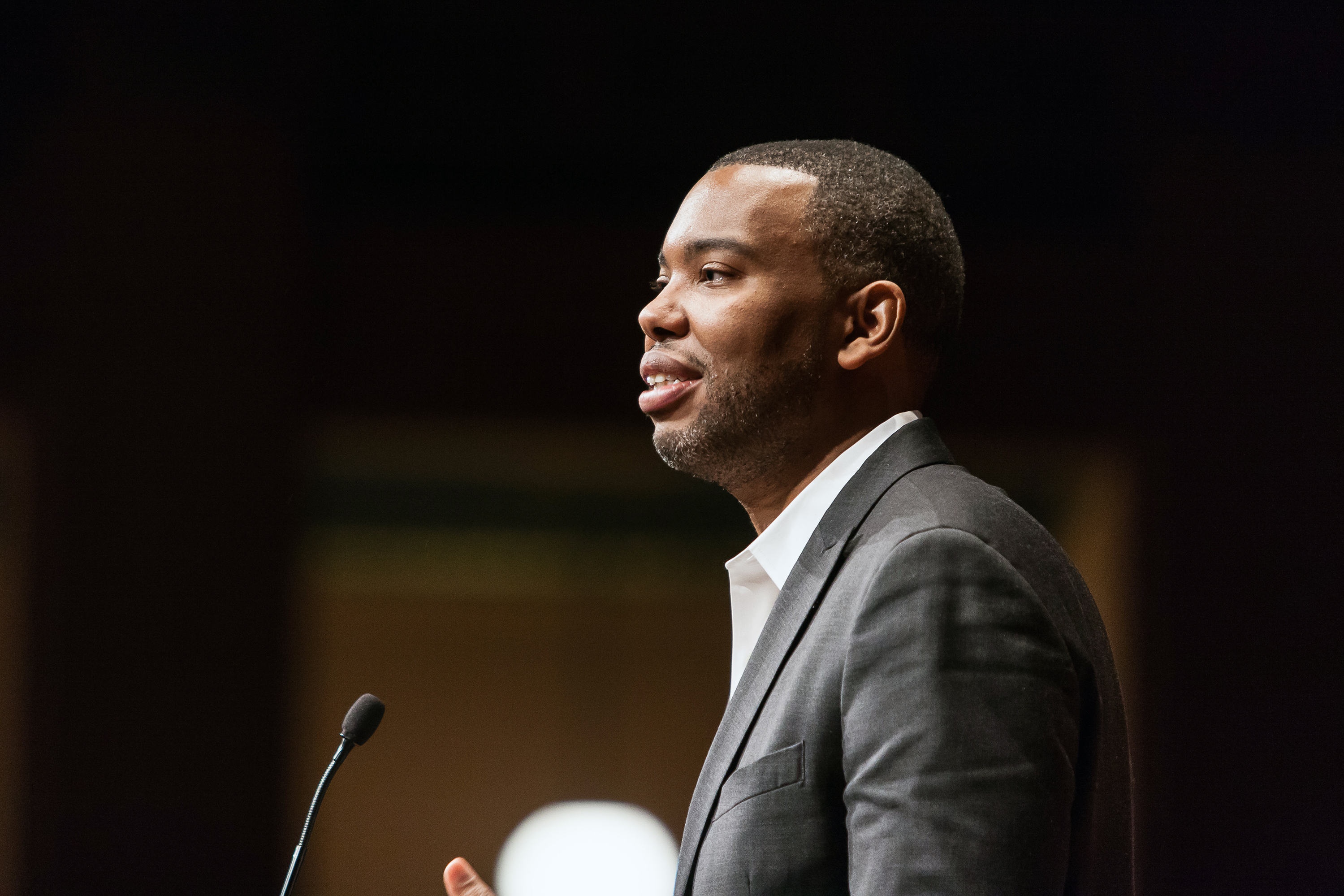 Ta-Nehisi Coates delivers a lecture at University of Michigan in 2015. He will be speaking to a sold-out crowd at Seattle's Benaroya Hall on Sunday.

For all of its progressive bona fides, Seattle remains burdened by the familiar vestiges of American racism: People of color suffer here from inequities in education and academic achievement, underrepresentation in the tech industry and overrepresentation in prisons, homeless camps, and the rolls of those shot by police.

Few people explore this complicated American reality with the deftness and poetry of Ta-Nehisi-Coates, one of America's premier writers on race, who will be speaking to a packed house at Benaroya Hall on Sunday.

Coates' message is often dark, but in his essays, facts sing and analysis booms, landing heavy and squarely on the soul. Read enough of Coates and it eventually becomes clear that the force and flare of his writing resides in is his ability to meld style with substance, a power born of his love for hip-hop.

The book, “We Were Eight Years in Power: An American Tragedy,” gathers nine essays originally published in The Atlantic. Except for one, each appeared during a different year of Barack Obama’s presidency. To read these probing works of journalism in one place is to witness Coates at the height of his powers.

But the greater joy lies in what’s revealed about Coates himself along the way. Before each piece, he provides introductions grounding the reader in his world at the time of writing. He calls them “extended blog posts,” but this is severely understated; they are shimmering, introspective essays, together forming a nuanced self-portrait of a man and writer more comfortable explaining America’s seemingly terminal illness than attempting to provide relief for it.

In the first introduction, it is 2007, the year that Obama launches his campaign for president. Coates is collecting unemployment benefits. He writes, “I’d felt like a failure all my life — stumbling out of middle school, kicked out of high school, dropping out of college.” Married with a child and living in New York City, he was struggling to hold down a writing job. He found great meaning in his identity as a black writer, but this could not pay for the groceries. Not yet.

Coates sets the stage early in the book for how the election of our first black president is directly tied to his own star-bound trajectory, one that begins in a welfare office and ends in the White House. “White people were enchanted by [Obama] and those who worked in newsrooms seemed most enchanted of all,” he explains. “This fact changed my life.”

He means this literally. Coates contends that the ascendance of the Obama family to the presidency opened up a market for him and other black writers, ultimately leading to their respective national recognition. Before too long, an editor from his earlier years works a connection at The Atlantic, landing Coates his first major assignment for a national magazine — a profile of Bill Cosby. It is the first piece in the book.

The Cosby profile marked a turning point for Coates, but he considers the essay a failure because it did not seriously address the then-mounting rape allegations against the comedian. In fact, Coates does not appear wholly satisfied with a piece for a while. He prefers the title to his profile on Michelle Obama over the essay itself. His review of a book about Malcom X “sounds better than it reads.” It’s not until Barack Obama’s fifth year in office, when Coates writes ‘Fear of a Black President,’ that he feels “in control of the form.”

At that point, he’d been writing for 15 years.

For Coates, failure is the condition of writing and defiance the condition of blackness. In "Between the World and Me," his National Book Award winner which took the form of a letter to his son describing the vulnerability of the black male body, Coates does not pass down false hope. Instead he bequeaths difficult truths wrapped in the wisdom of struggle:

…you must wake up every morning knowing that no promise is unbreakable, least of all the promise of waking up at all. This is not despair. These are the preferences of the universe itself: verbs over nouns, actions over states, struggle over hope.

In the new book, Coates is constructing in real time the architecture that frames this worldview. By now, the pillars of that story are familiar to his readers: the critique of respectability politics, the country’s history of plunder, the intransigence of white supremacy, the moral necessity of reparations. His evolution on all of this appears throughout the book as genuine revelations, the work of devoted investigation and self-discovery. It makes for poignant reading, and brings us closer to Coates: He is an obsessive autodidact; a writer reverential of the craft and all its tools; an atheist fulfilled by his family, friends and work.

“And so, in writing, I found that black atheism and defiance morphed into a general theory of the life,” Coates writes. “No one was coming to save me, and no one was going to read me. My reasons for writing had to be my own, divorced from expectation.”

Three years into the Obama presidency, Coates’ main concern becomes the Civil War. He becomes enraptured with the subject. He devours podcasts, books and scholarship and travels to old battleground sites. In the essay, the third to appear in the book, he denounces what he considers America’s failure to view the war honestly, for fear that doing so would rupture a more soothing story white America prefers to tell itself. He writes:

In our present time, to express the view of the enslaved — to say that the Civil War was a significant battle in the long war against bondage and for government by the people — is to compromise the comfortable narrative. ... It is to point out that at this late hour, the totems of the empire of slavery — chief among them, its flag — still enjoy an honored place in the homes, and public spaces, of self-professed patriots and vulgar lovers of ‘freedom.’ It is to understand what it means to live in a country that will never apologize for slavery, but will not stop apologizing for the Civil War.

The resonance remains clear as ever. Just this week, Gen. John Kelly, President Trump's chief of staff, trafficked in the same old dishonest interpretation, prompting Coates’ reply on Twitter: “People out here asking me for ‘hope.’ Meanwhile, the adult in the room thinks the Easter Bunny caused the Civil War.”

While Coates was grappling with new ideas and arguments, attempting to draw a line that connected this original sin to the present, he was also intensely focused on his craft. He longed to write “with weight and clarity, without sanctimony and homily.” He could hear the sound in his head: “It was a blues with a beat dirtier than anything I had ever heard anywhere in the world.”

The first time Coates got close to capturing that music was in "Fear of a Black President," an assessment for The Atlantic of Obama’s first term. It is critical of the president and the country he claims but rendered with a deep, mournful and complicated affection. In the piece, Coates battles with white America’s love for Obama, becoming momentarily convinced that the country really had changed.

This would not last. Throughout his term, Obama was lambasted by racist vitriol on talk shows and on the internet. His presidency gave rise to the Tea Party’s obstructionist white identity politics. It launched birtherism, the racist conspiracy promoted by Donald Trump that sought to de-legitimize the first black president.

The essay’s great achievement is exposing the limits of Obama’s ability to speak and act on race. In so doing, Coates condemns a nation “enlightened enough to send an African American to the White House, but not enlightened enough to accept a black man as its president.”

An essential skill of Coates is his ability to resurrect facts from the past and weave them into blistering polemic. The effect in many cases is broad cultural indictment. In essays from the book, including "The Case for Reparations" and "The Black Family in the Age of Mass Incarceration," Coates details the complicity of those who either directly supported policies that injured black people, or looked away as they were championed by liberal politicians.

In punching both left and right, Coates’ writing forces us to confront the prevailing feel-good narrative about America that obscures our sordid past. It’s a story many of us tell ourselves, especially here in Seattle, to dismiss the daily institutional outrages — police killings, over incarceration, evictions — that disproportionately afflict nonwhite communities, and black communities in particular.

Many of the arguments in “We Were Eight Years in Power” resist and dismantle the idealism of the Obama years. They instead posit a national fatalism: White supremacy has been here since the beginning and is bound to remain until the end. The book’s epilogue — an essay called "The First White President," which came out after Trump was elected — to some extent vindicates Coates’ pessimism. To him, the possibility of absolution is folly. To begin to repair the wounds of the past and the injury of the present is to summon a moral courage yet unseen in American life. The man who rejuvenated a popular debate about reparations doubts this will happen in his lifetime, or in his son’s, if ever.

Coates is calling on a nation born from the conflicting notions of freedom and slavery to maturely confront this essential paradox. How, he does not say; his writing is not prescriptive. Nor does it need to be. His power lies in asking questions that cause a commotion of the soul. Transforming society will depend on how white Americans, and especially white liberals, choose to channel that chaos, whether we choose clarity of vision over false hope, maturity over innocence.