The choir that sings for the dying 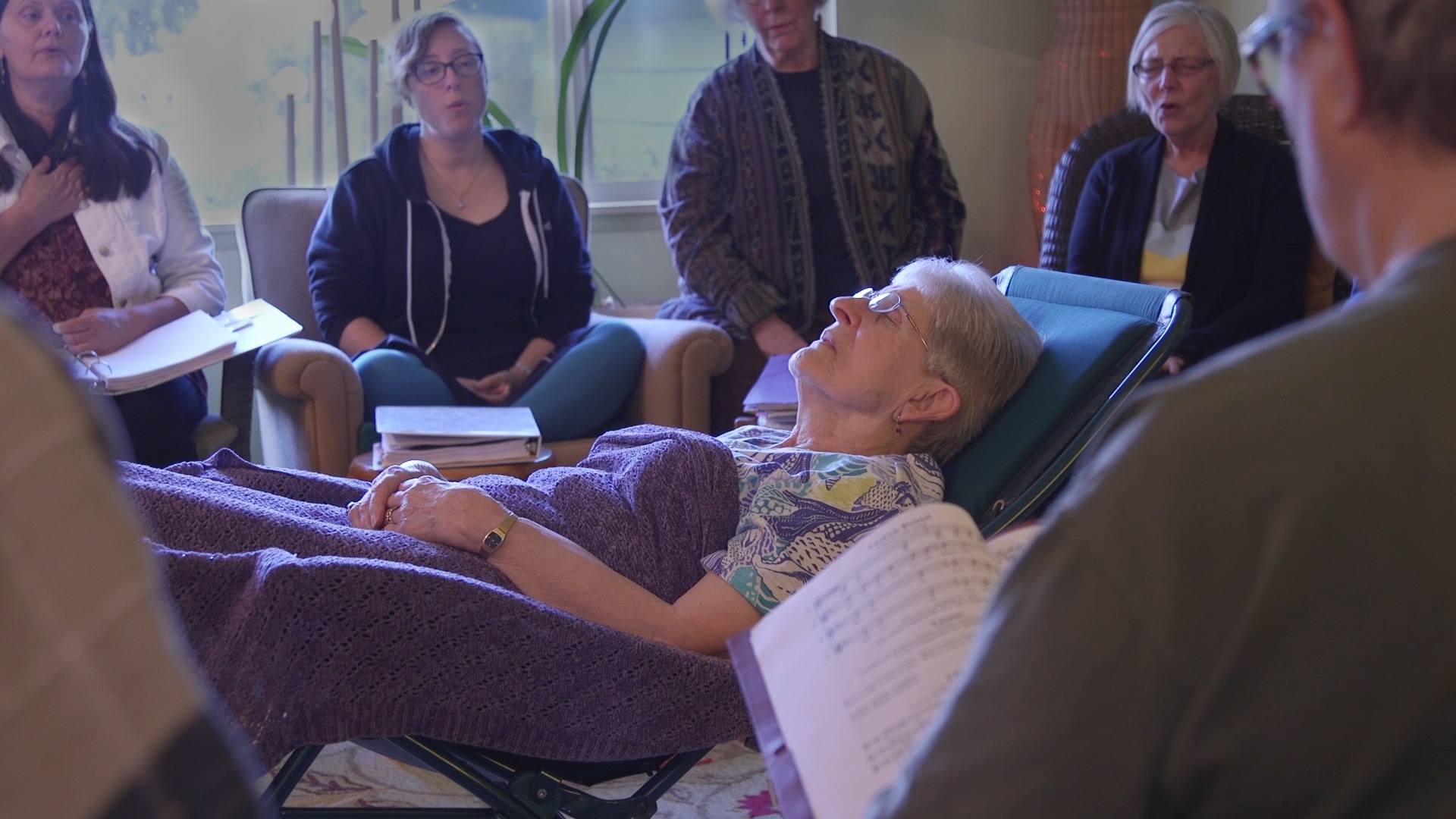 The Threshold Choir rehearsing in Shoreline on Thursday, September 21, 2017. Seattle's chapter of the Threshold Choir is made up of about 30 female singers. They sing to people who are sick or dying. (Still image from video by Aileen Imperial/Crosscut)

Robin Rose first experienced the power of the Threshold Choir as she recovered from major surgery after a cancer diagnosis about ten years ago.

"They were at the end of my bed and they were singing beautiful music, but I looked at them, and the expressions on their faces were just so warm and loving. And something in me just said, 'Oh. There's nothing I need to do at all in my life. I could die right now, and I'm totally fine with that,'" Rose recalled.

The all-volunteer Threshold Choir sings for those who are, as they put it, at the thresholds of life. Some are in hospice care; some may not even be able to move or talk. In some instances, the choir may only have one opportunity to sing to a participant before they pass away. Others may be near death.

Inspired by the loss of a friend who died from AIDS, Kate Munger launched the first choir in the Bay Area in 2000. There are now more than 150 choirs worldwide. Rose leads the Seattle chapter of the Threshold Choir. The 64-year-old once lived in Santa Cruz, California where she learned about the choir from the founder. “I'm not a music reader. I have very little musical background,” Rose said. “But I have a good ear.”

The Seattle choir is made up of about 30 female singers from a variety of backgrounds. There are no auditions, but the volunteers are expected to be able to sing in tune. They also commit to at least two rehearsals a month and to monthly performances.

Choir member Karen Ward, 58, believes it's the choir's mission that delivers the most comfort to their listeners.

"I think that in many ways the intentionality that we bring to the bedside is every bit, if not more important, than the musicality we bring," Ward said. "As long as we have this cohesive prayer, of sorts, that we're offering to them, it's all good. And conversely, if we sang everything perfectly, but we were disconnected from them, it's not good."

One important stipulation: Although the choir often sings spiritual songs, the Threshold Choir is a secular organization that adapts to the needs of those it serves. The songs "are not based on any particular faith," explained 73-year-old choir singer Marcia McLaughlin, who is a minister in spiritual direction at Richmond Beach Congregational Church, United Church of Christ. "I think that's really important, so that the person we're singing to is not all of a sudden confronted with something that doesn't fit their own belief system."

One of McLaughlin's favorite people to sing to is friend Diane Graham.

"It brings me joy to be able to do something positive for her. She is so ill, and I've watched her go downhill steadily," McLaughlin said. "So this is just a way in which I can bring some joy into her life."

About 10 years ago, Graham began experiencing health issues. As a female technician, Graham had worked for IBM, Amazon and the Bill & Melinda Gates Foundation. Suddenly, however, Graham was having a hard time keeping up at her job. For years doctors couldn’t pinpoint what, exactly, was wrong. Eventually, her health issues forced Graham into early retirement.

“We had talked about doing all these things when we retired," says Graham, 64, about the future she had imagined with her wife, Elaine Douglas and their two daughters. "You know, going traveling, watching the kids grow up and have babies. That’s not going to happen. You know, we’re not going to be able to grow old together.”

Her illness has brought the couple closer together, she says. It also introduced the couple to the Threshold Choir.

Three to four members of the choir visit Graham every other week at her home in Shoreline. As Graham leans back in a recliner, her wife lies next to her and the singers circle around them. The couple closes their eyes and hold hands as the music washes over them.

“They bring so much joy and energy and life to you when they come and sing,” Graham says. “It makes your heart fill with joy for a couple of hours and it just, it means the world to both of us because we can sit here and see and just be and listen and not have to worry about anything.”

"It’s not so much about the song itself, it’s about the way it’s delivered and the people who deliver it," Douglas says. "So, you know, they can sing ‘How Much is That Doggie in the Window,’ and I can love that as much as I like deeply spiritual songs that they sing."

"They often pick up on the energy in the room, and they’ll sing a song and it’ll be the perfect song."

McLaughlin, for her part, has also been been transformed by the choir experience. Her own outlook on death has changed.

"It just has made me a lot more comfortable with this part of our life journey because it is a journey we all have to take at some point."

Update: “Diane Graham passed away on June 13, 2019. The night before her death, Threshold singers sang Graham to sleep with lullabies.”