Fire burns under a Superfund site in Washington 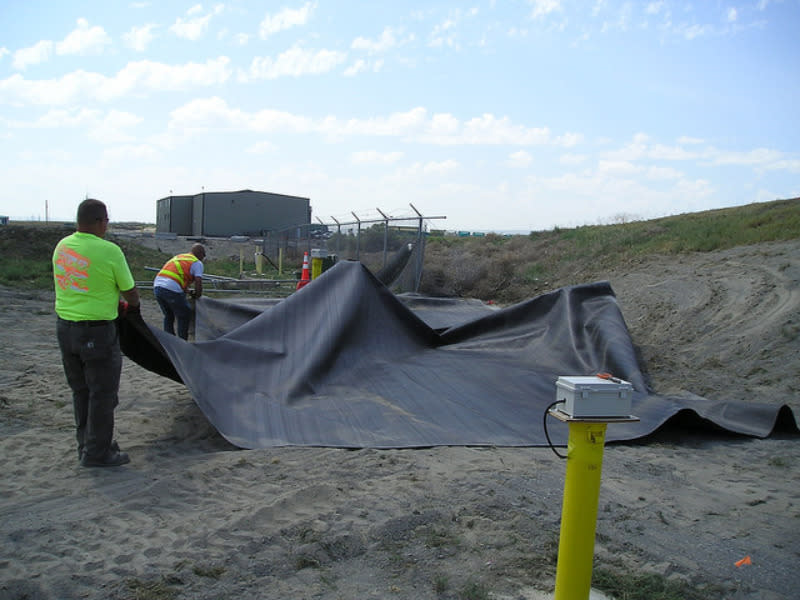 Contractors place an engineered cover, called geomembrane, over the balefill area at Pasco Sanitary Landfill. The fire under this area burned for about two years. Photo credit: John Richards

It’s not a Dumpster fire, but could be something far more serious: A fire may be smoldering under a landfill-turned-Superfund cleanup site in southeastern Washington.

Back in the 1970s, people started dumping industrial waste at the site. Somewhere around 35,000 drums of hazardous substances — like solvent, paint sludge and cleaners — are buried in the zone that’s now burning.

The Washington Department of Ecology says the smoldering waste is not an immediate threat to people.

We are working with the parties responsible for Pasco Landfill cleanup to safely address the fire situation,” the department said in a mailer sent to people who live nearby.

This landfill fire was discovered after temperatures spiked in the area. Workers dug a borehole deep into the pile and brought up charred bits of waste.

The charred waste was at least 15 to 20 feet underground.

According to a 2001 report from the U.S. Fire Administration, about 8,300 landfill fires each year cause up to $8 million in damage — most often igniting in the summer months when “there’s a greater chance of spontaneous combustion or hot, smoldering discarded products igniting.”

The report says most landfill fires are caused when people throw away warm garbage, like previously burned charcoal briquettes or cigarette butts. Many of these fires are above ground. Only 5 percent of landfill fires happen under the surface, according to the administration. (That would be about 415 subsurface landfill fires nationwide each year.)

There have been relatively few studies on spontaneous, underground landfill fires. In a 2009 Ph.D. dissertation at the University of Central Florida, Shadi Moqbel found there is a correlation between densely packed landfill and fewer spontaneous fires.

It’s these subsurface fires that are the most difficult to detect and extinguish.

Another fire burned for two years at the Pasco Landfill cleanup site, next to the area that is currently burning. It was officially extinguished in 2015 after a deep trench was dug around the fire’s perimeter and filled with soil and cement. That kept the fire from spreading. The smoldering waste was then dug up and mixed with a slurry of water, clay and cement.

Investigators are also concerned about the threat of contamination to groundwater near the site. Samplings have found found a 3-inch-thick layer of petroleum hydrocarbons, solvents and PCBs floating on the groundwater.

The state and the U.S. Environmental Protection Agency say cleanup efforts have shrunk the contaminated plume, and it should not affect people’s health.

The state is reviewing a draft study comparing cleanup plans for the landfill and will be available for public comment.